The college football season is in the home stretch for most teams, and after a full slate of games on Saturday, we at PFF and our team of over 500 analysts has dissected and graded every player on every snap of every game to bring you the most detailed and valid set of picks you can find anywhere.

The Week 10 Eckrich Pac 12 Team of the Week powered by PFF saw some impressive performances and, of course, the strength of opponent also factored into the overall selections as did the PFF player grades. 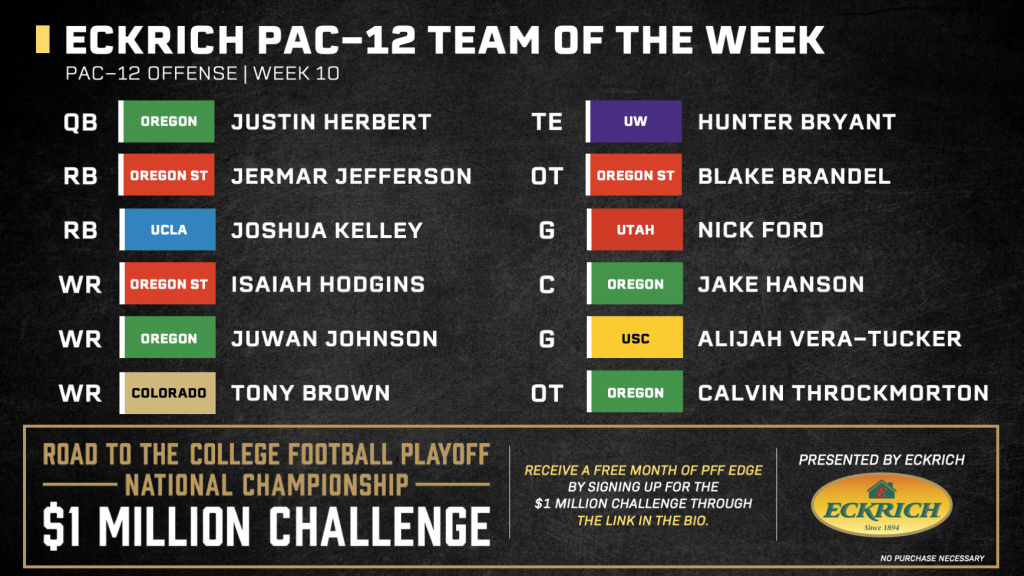 Herbert led his Oregon Ducks to a dominating 56-24 victory over the USC Trojans despite leaving the contest early in the fourth quarter due to a thigh injury.  Before exiting the game, Herbert handled the Trojans' secondary, completing 21 of his 26 passes for 219 yards and three touchdowns en route to the conference’s highest passing grade.

Oregon State ran all over the Arizona defense, rushing for 244 yards and five touchdowns. Jefferson accounted for 105 of those yards, as well as three of the team's eight total touchdowns. His performance on the ground earned the highest rushing grade in the Pac 12 and the third-highest in the nation.

Kelley mauled the Colorado front seven on Saturday night, running for a conference-best 126 yards on 23 carries. He converted on seven of his attempts, punching into the end zone twice and picking up another five first downs.

Hodgins and the Beavers are quietly in second place in the Pac 12 North and two wins away from bowl eligibility this season, thanks in large part to Hodgins’ efforts this year. He was once again dominant through the air, catching seven balls for 150 yards, two scores and three more first downs. He saw a perfect 158.3 passer rating when targeted against Arizona and is the nation’s highest-graded receiver this year.

Johnson made his first start for the Ducks on Saturday and did not disappoint. The former Penn State receiver nabbed seven of his eight targets for 106 yards and two touchdowns. Johnson had a 158.3 passer rating when targeted and recorded the conference’s best receiving grade among receivers with at least five targets.

The Buffaloes were unimpressive against UCLA, but it was to no fault of Brown. He took his six catches for 77 yards and Colorado’s only receiving touchdown of the night. His 144.3 passer rating when targeted was third in the Pac 12, just behind both Johnson and Hodgins.

Bryant did his best against Utah, but the Huskies came just short, losing 33-28 to the Utes. He exploded for a nation-best 105 yards and two touchdowns to boot. He was able to make plays once the ball was in his hands as well, gaining the country’s second-most yards after the catch with 49.

The Utes picked up a huge victory over Washington on Saturday, further cementing themselves atop the PAC 12 South. Ford was instrumental in their win, posting top-five grades in both pass and run-blocking, showing his versatility in the middle of the offensive line.

Hanson is the first Oregon offensive lineman to make the list here as the team’s center finished with an excellent game across the board. He allowed one pressure on 34 pass-blocking snaps and trailed only USC’s Brett Neilon in run-blocking grade among centers in the conference this weekend.

Vera-Tucker makes his second appearance on the list after making the second team on four occasions. He nabbed the conference’s highest pass-blocking grade, which ranked sixth among all guards in the nation. Along with his strong play in pass protection, Vera-Tucker also had the best run-blocking grade, top-15 in the country.

It was yet another performance worthy of national recognition, as the Oregon tackle put forth a perfect game in pass protection (zero pressures on 34 pass-blocking snaps) and had a dominant outing in the run game. All told, Throckmorton is climbing the overall grade ranks in an attempt to catch teammate Penei Sewell, who still leads by a comfortable margin. 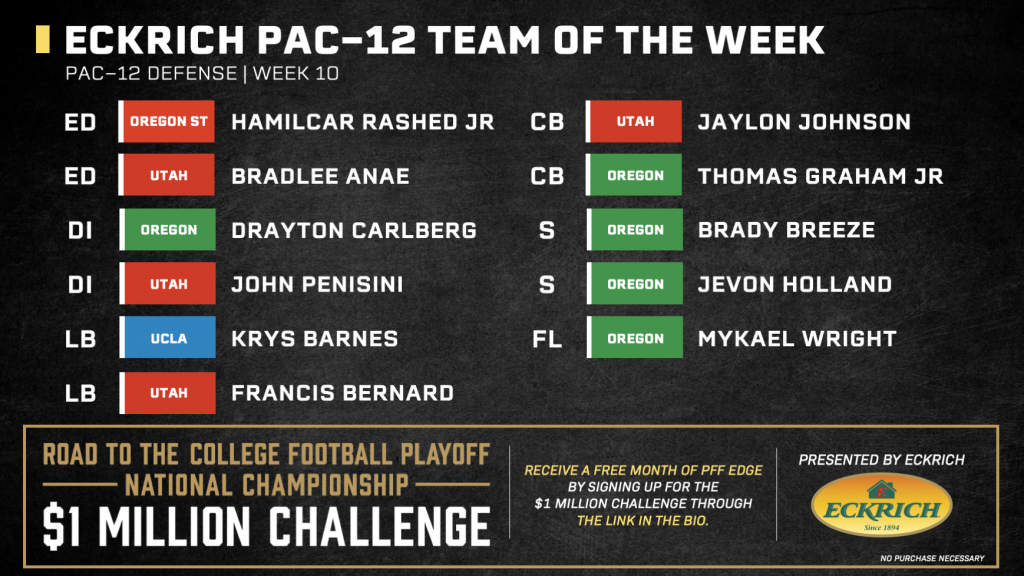 The Oregon State offense stole the show against the Wildcats Saturday, but Rashed Jr. quietly had one of the best games of his collegiate career. He generated a nation-best 13 total pressures and the second-best pressure percentage at 43.3%. He nabbed four sacks on the evening, totaling 12 on the year thus far, which is tied for Oregon State’s season record with four games left to play.

Anae continues to dominate game in and game out, this time making life difficult for Jacob Eason and the Washington offense. He was able to grab 11 total pressures, just behind Rashed Jr. for most in the country. His 24.5% win rate was third-best in the Pac 12, beating his blocks with consistency all evening.

Carlberg earned the highest overall and pass-rushing grades among interior defensive linemen in the Pac 12, playing a vital role in the Ducks' victory over the USC Trojans. His win percentage was best in the conference as he racked up four total pressures, including a sack-fumble in the second quarter that was capped off with an Oregon offensive touchdown.

Utah allowed just 53 total yards rushing to Washington, and their front seven was a pivotal reason as to why. Penisini recorded the best run-defense grade out of all defensive interior players in the conference, nabbing five defensive stops and a key forced fumble late in the first quarter on a Jacob Eason scramble.

Barnes had a terrific all-around performance, finishing the outing for the Bruins with four pressures, including two sacks, five total defensive stops and just 20 yards allowed in coverage. He also nabbed an interception and saw a passer rating of only 29.2 when he was the primary coverage defender.

Bernard performed well in all phases of the game on Saturday. He posted the best run-defense grade in the Pac 12, eighth in the nation among linebackers. Bernard was also solid against the pass, allowing zero receptions on one target across 45 snaps in coverage.

Johnson is the last Utah defender to grace the Week 10 Pac 12 team of the week, but certainly not the least productive. He was able to own the best overall and coverage grades in the conference allowing zero catches on three targets for 0 yards. He would top off his performance with an interception, finishing the night with a 0.0 passer rating when targeted.

Graham Jr. is the first of four Oregon secondary players on the list, rightfully so, due their play against the USC passing attack. Graham netted the third-best coverage grade in the Pac 12 after allowing a mere three receptions for 14 yards on 54 snaps in coverage.

Breeze had arguably the most impactful day of any defensive player this weekend as he scooped up a fumble and intercepted a pass that he returned it for a 32-yard touchdown that pushed Oregon’s lead to 21-10 in the second quarter. He made four total tackles and allowed just two receptions for six yards while spotting a 16.7 passer rating into his primary coverage in an all-around elite game.

The defender with the most slot coverage snaps in the nation, Holland recorded the second-best tackling grade in the conference regardless of position. He was seven times in coverage, allowing six receptions for 50 yards. Although he conceded passes, he was able to wrap up after every reception, allowing just 14 yards after the catch on the day.

Wright played just 27 total snaps against USC, but that was all he needed to make an impact. Kedon Slovis threw the ball three times into Wright’s area but was ineffective in doing so. Wright forfeited just one completion for 11 yards, subsequently leading to a 45.1 passer rating when targeted.