Football is finally back! Thus, we now get to look at who’s excelled on the field. Today and as we progress through the season, we’ll continually look at the highest-graded players at specific positions. First up – the defensive linemen.

The former walk-on is starting to build a serious resume. In 2018, Highsmith was a top-20 overall graded edge defender and the highest-graded in run defense. Saturday was no different. He recorded seven total pressures, including three sacks, and three stops. His 68.4% win percentage was second nationally among all defenders with at least 10 pass-rush snaps.

Lynch has been a productive player in his first two seasons in Waco (75.2 grade in 2018 and 34 career QB pressures), but he took it to another level in the opener against Stephen F. Austin.  Lynch’s 93.8 game grade was the highest single-game grade of his career, more than besting his previous high of 81.1 against Kansas last season. In the game, Lynch tallied nine total pressures on only 17 pass-rush snaps, giving him the highest pressure percentage (52.9%) in the nation among those with at least 10 pass-rush snaps. 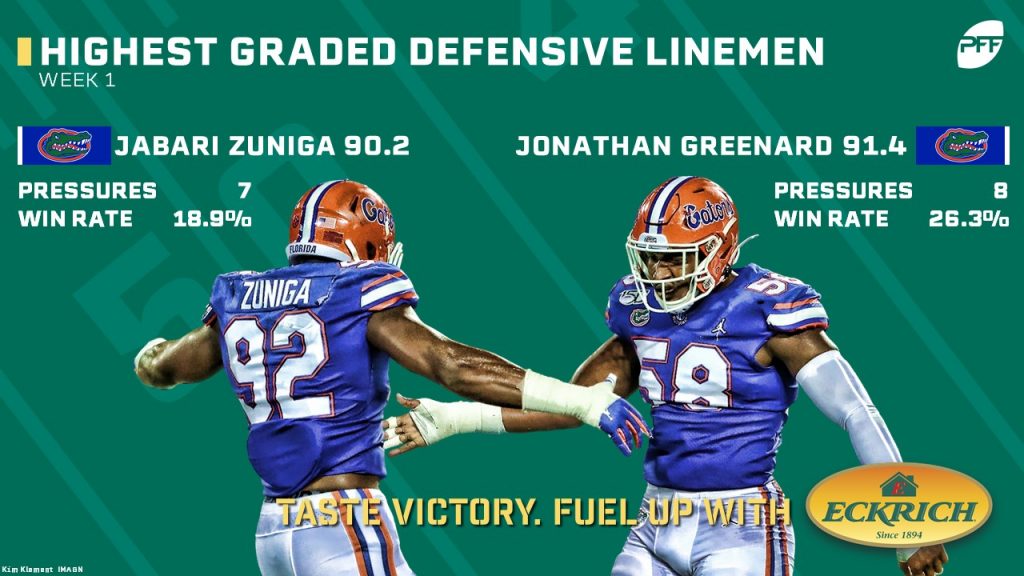 Needless to say, the Florida edge defenders thoroughly enjoyed seeing the youthful Miami offensive line a week ago. The two combined for 15 total pressures (eight by Greenard and seven by Zuniga), including five sacks, as well as eight stops. If not for their three missed tackles, these two may have been Week 1's highest-graded defenders in all of college football.

While Old Dominion struggled overall against FCS opponent Norfolk State, the combo of Meiser and Ross dominated on the interior. The two combined for eight total pressures and seven stops, and Ross also forced a fumble. For Meiser, his seven total pressures almost eclipsed the entire total he had a season ago in 232 pass-rush snaps (9).

The Owls blew out FCS Bucknell, and Maijeh on the interior was a big reason why. He had a sack, QB hit, and hurry (three total pressures) to go along with six stops in the run game. The redshirt sophomore played more snaps on Saturday than he did in any game a season ago. 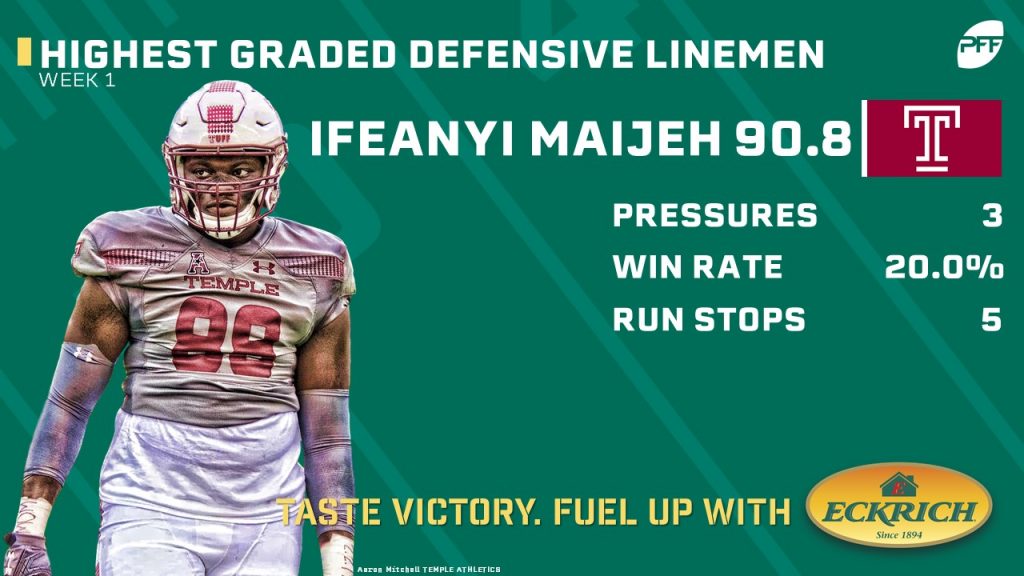 This is one name you shouldn’t be surprised to see on this list. Wilson is one of the best returning interior defensive linemen returning this season, and he was dominant in Week 1 against Boise State. Wilson recorded six total pressures (including a sack), three stops and forced a fumble.

After missing most of 2017 due to injury, Black was a rotational player who did not provide much impact a season ago. The opener was a different story has Black and the rest of his defensive teammates shut out Liberty. Black equaled his career sack total with two on Saturday and almost eclipsed his 2018 pressure total with four total QB pressures (six in 2018). In addition, he recorded three stops in the run game.

In one of the more exciting games of the weekend, Crawford and the rest of the Tar Heels helped get Coach Mack Brown a victory in his return to the sidelines. After only playing seven snaps in 2018 due to a knee injury, Crawford recorded a sack and six stops. His run-defense grade was the third-highest among all interior defensive linemen.