After Week 12 in college football, we take another look at who's in line for the Heisman in our weekly Heisman Watch.

The trophy remains Burrow's to lose after increasing his lead in basically every category we have at PFF over his counterparts. He's the highest-graded player on offense through 12 weeks and just so happens to play at the most important position in team sports. He's lights out when throwing at least 10 yards downfield and even with two interceptions to his credit, the rest of his game against Ole Miss was outstanding. He pushes the ball downfield better than anyone else in the country and has three more games on his schedule to prove he's more than capable of bringing in the hardware as well as pushing further into the LSU record books.

Young's return from a two-game suspension comes at the best time as the Buckeyes will certainly need their star defensive player against Penn State and Michigan in consecutive weeks and in all likelihood a Big Ten Championship game appearance. Young still leads all defensive players in pass-rush win rate as well as overall grade and he'll have two showcase games to highlight how dominant he is for the Buckeyes defense, who even in his absence, could be considered the best defense in the country.

Hubbard is now just 273 yards away from 2,000 yards as he's averaging a whopping 6.7 yards per carry on his 259 attempts. His yards after contact figure would rank ninth among all FBS running backs in total yards as he's leading the country in both categories by some margin. He's broken 63 tackles and has gained at least 10 yards on 38 carries while averaging 4.17 yards after contact per attempt. He's the nation's best pure runner this season and his 20 touchdowns are second-most while his 77 total rushing conversions are third-most.

Fields moved into second in overall grade among quarterbacks after a dominant performance in essentially a half's worth of work against Rutgers in Week 12. He'll have to utilize his downfield passing ability that he's shown this season over the next three weeks as the OSU schedule significantly increases in difficulty but that's perfectly fine for the nation's third-highest-graded passer on all targets at least 10 yards downfield. Fields is the only quarterback in the country with at least 17 touchdowns passes on such throws and fewer than two interceptions as he's lit up defenses on downfield passes. Combine that with the fact that he's also gained 494 total yards on the ground and 10 more touchdowns to his credit, and the nation's best dual-threat passer resides in Columbus. 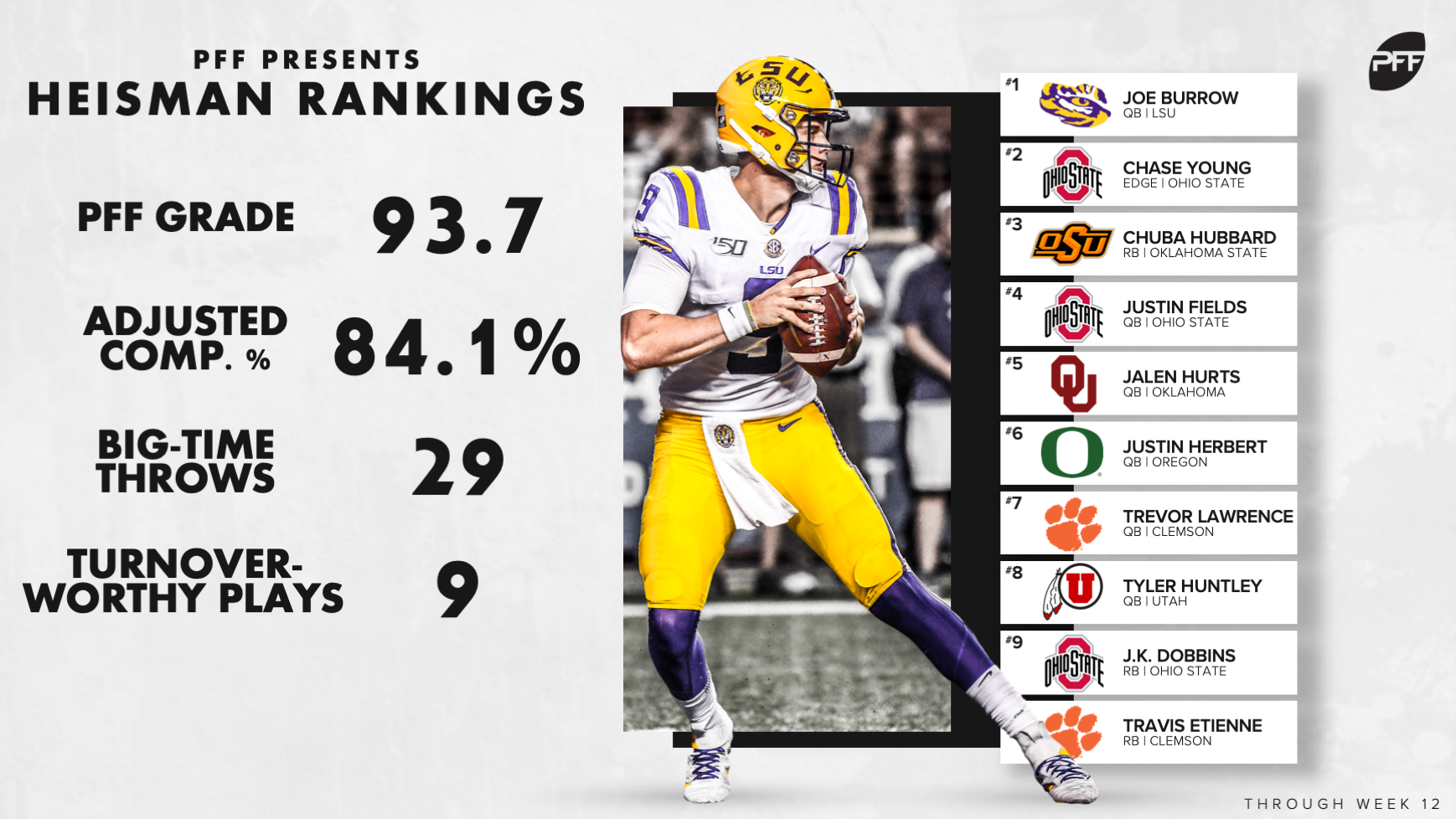 Hurts harmed his team with four turnovers in the come-from-behind victory over Baylor but the fact remains, he came from behind, from the hole he put them in, and still, got the victory to remain in the College Football Playoff picture. He's got a great skillset for a college quarterback and has showcased that with 1,044 total rushing yards including 663 on designed carries to go along with 3,038 yards through the air. He'll need to avoid mistakes over the last two games and the Big 12 Championship game to make noise for the top spot here but he has all the ability to get to No. 2 if he does.

The Auburn game is nothing more than an anomaly on Herbert's 2019 schedule as he's set to surpass his previous career-highs across the board. He's just a touchdown pass away from his best season through the air, a few hundred yards from topping his career-best there and just 0.3 grade points away from topping his career-best passing grade. He's finding his receivers in space with great ease and maneuvering the pocket perfectly as he's ripped off nine straight games of at least 65.8 overall while eight of those nine have been well above our threshold for above-average (70.0). The Ducks are on the move towards a Pac-12 title game appearance and their signal-caller is the main reason (and their defense, as a whole).

Don't look now. The defending national champs have looked more and more like that moniker in recent weeks as their 2019 edition has seamlessly started to come together as one. The biggest aspect of their coming together has been the play of Lawrence as he's put forth three straight game grades above 90.0 and has five elite-graded games over the past eight outings. He's limiting mistakes after doing the exact opposite earlier in the season as he's been tremendous once again at the helm of the Tigers. He's likely too far behind to win the trophy this season but he's playing himself into an invite to New York and the chance to be the odds-on favorite to win in 2020 at this rate.

The best quarterback that no one talks about, Huntley's brand of play has been nothing short of spectacular in 2019. Save for a poor outing against Arizona State and Huntley has put forth a game grade of at least 73.4 in every game. He's not tasked with throwing deep very often but when he does, he's been tremendous. He's the nation's second-highest-graded quarterback on throws at least 10 yards downfield, completing 47-of-68 attempts for 1,348 yards and 10 touchdowns against just one interception. His 13 big-time throws still rank in the top among all signal-callers despite far fewer throws and his adjusted completion percentage of 77.9% is by far the highest in the country. Huntley has the Utes staring down at a Pac-12 Championship game appearance for good reason as his (and Zack Moss') play has done nothing but win them games while their defense does the rest.

Dobbins doesn't get quite the hype as his two teammates on this list but he'll certainly be counted on down the stretch to squeeze out the yards and the first downs in what is looking like two of the best three defenses the Buckeyes will face this season in Penn State and Michigan. Dobbins is fifth in total rushing yards but averages 7.0 per carry while he's limited himself to just one fumble despite 183 total carries. He's broken 41 tackles to break his previous career-best as he's likely to top all his previous career-highs in every rushing metric in a dominant year despite playing far fewer than four quarters of play per game due to the nature in which the Buckeyes win their games.

Etienne has had arguably the best run-blocking in front of him this season with the dominant Tiger offensive line but when he's been tasked to break runs on his own, he's done it spectacularly. He'll likely lose votes to his quarterback, similar to Dobbins above, but for no fault of his own. Etienne averages the nation's top yards per attempt (8.7) as he's just 400 yards behind Hubbard for the most rushing yards despite 105 fewer carries. He's gained 1,327 yards on 152 attempts with 69 broken tackles, the latter ranking third in the country. Take away a fumble or two and Etienne dramatically rises in these rankings, still, he's a home-run threat every time he touches the ball and the Clemson offense is rolling of late.