PFF has collected data and analyzed college football since 2014. Thus, this will be the third class of players that we have seen go through an entire college career. With rivalry weekend and the end of the regular season now upon us, we examine the seniors, players who will be recognized on home fields across the country, for each of the PFF Top 25.

The Tigers’ senior class is poised to make its fourth consecutive trip to the College Football Playoff and also looking to win its third national championship in four years. Muse is the defense’s highest-graded player and leader. His 90.8 grade is second-best among safeties with at least 400 snaps, and he’s also coming off his best game of the season. Against the Demon Deacons, Muse had four stops, three quarterback pressures (including a sack) and an interception on only 25 snaps. 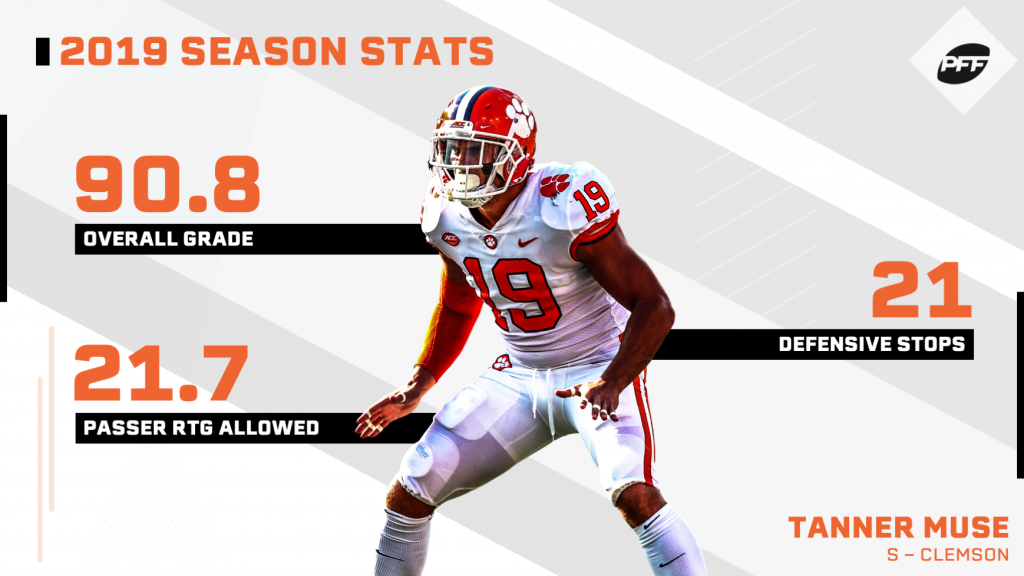 After a shaky start to his tenure with the Tigers, including missing the 2017 season due to suspension, Fulton is looking to finish his career by helping the Tigers into the playoff. In the past two seasons as a starter, Fulton has been elite in coverage. All told, he’s allowed just a 44.2% completion rate into his coverage to go along with 15 pass breakups and two interceptions.

One of the many highly graded players on the Buckeyes’ uber-talented defense, Harrison is the team’s highest-graded senior. He’s been especially elite as a tackler in 2019. He’s only missed two tackles on the season, and his tackling efficiency (28 attempts per missed tackle) is the third-best among linebackers in the FBS.

One of only five Alabama seniors who play, Jennings is saving his best for last. While his overall grade is just slightly below his grade as a sophomore, he’s posted a career-high 89.3 pass-rush grade in 2019. His 40 total quarterback pressures are second on the team to Terrell Lewis, and he leads the team in stops with 39.

The senior leader for one of the nation’s best defenses is posting his third straight high-level season for the Bulldogs after transferring from Tulsa. He’s logged over 2,300 snaps for Georgia and currently has 10 career pass breakups and five interceptions, including his lone, huge interception at home against Notre Dame earlier in the season.

For his career, Metellus has allowed only a 49.3% completion rate and a 53.6 passer rating into his coverage. While Metellus has been a rock and starter at safety for the past three seasons, Uche is taking advantage of his chance this season after seeing limited time behind Chase Winovich and Rashan Gary. His 13.2 pass-rush productivity is fourth-best, and his 91.4 pass-rush grade is fifth-best among FBS edge defenders.

The senior has been the Sooners’ best and most consistent defender over the past two years, and he's improved his overall and pass-rush grade every season of his career. He is currently the seventh-highest graded interior defender and has at least one stop and one quarterback pressure in every game this season.

Claypool is Notre Dame’s highest-graded offensive player and has his second consecutive 50-catch season. His six receiving touchdowns in the past three games equals his touchdown totals over the previous three seasons, and his 117.5 passer rating when targeted is good for 26th in the FBS.

The senior is having the best season of his career, with highs in every PFF grading category. His 85.7 coverage grade is the sixth-best among FBS linebackers. He’s only allowed 73 yards on 14 targets into his coverage and also missed just three tackles on the season.

A dominant force for the past three seasons, Brown shocked many by returning for his senior year, and he’s been even more impressive as a senior. He’s had at least three stops in seven of the Tigers’ 11 games, posted a career-high in total quarterback pressures (31), and he is yet to miss a tackle.

The sixth-highest graded edge defender has been a force for the Badgers the past two seasons. Baun has had at least three quarterback pressures in eight of their 11 games and even has two pass breakups and an interception in coverage. Baun is another who’s had their best season in every PFF grading category.

The graduate transfer from Louisville has made himself at home in Gainesville and been the Gators’ best player in 2019. The current fifth-highest graded edge defender has 35 total quarterback pressures, including five sacks, and 21 stops.

The Utes have been led by their elite secondary, including one of the best safety tandems in the nation in Blackmon and Burgess. The two have combined for nine pass breakups and five interceptions and have yet to be penalized. In terms of coverage grade, Burgess has the third-highest among all FBS safeties and Blackmon the 13th-highest.

The senior has been the rock of the Ducks’ offensive line for the past four years. He’s already logged over 3,400 snaps in his career and played every position on the line at some point. For his career, he’s only allowed three sacks on over 1,700 pass-block snaps. 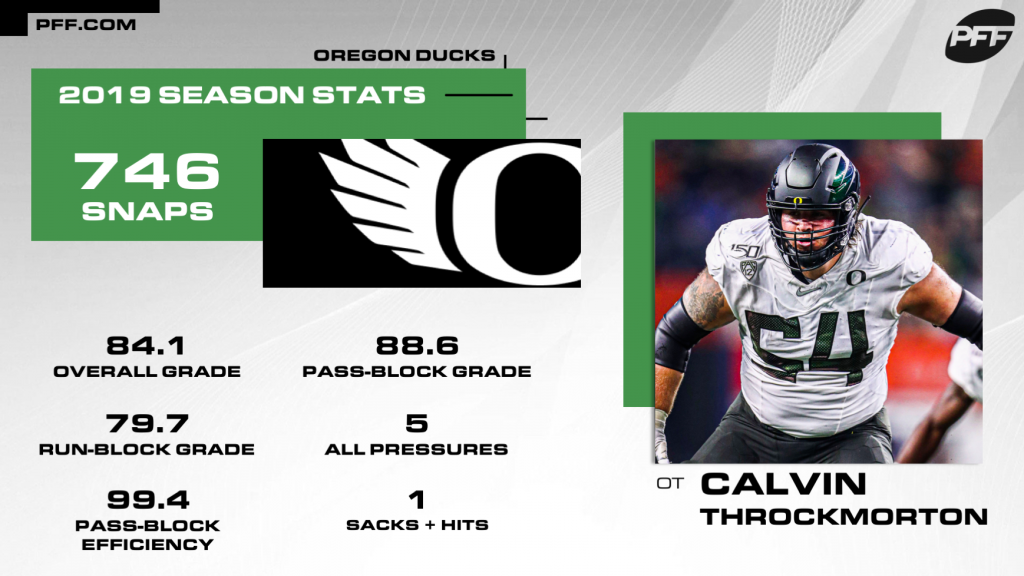 The fifth-highest graded receiver in the FBS is looking to finish off his career in style with a Big Ten championship, as the Gophers look to secure a spot in that game this weekend. While his career totals (194 receptions for 3,003 yards and 30 touchdowns) are astounding, he’s been at his best as a senior. He’s caught 76% of his targets, and his 151.9 passer rating when targeted is second-best in the FBS, only behind Alabama’s DeVonta Smith.

Despite missing the Hawkeyes’ upset of Minnesota, Ojemudia has had a standout senior season. He’s only allowed a 57.4% completion rate and 45.8 passer rating on 54 targets into his coverage. For his career, he has 15 pass breakups and six interceptions.

Huff is getting to the quarterback as well as any edge defender in the nation, as his 50 total quarterback pressures are the seventh-most in the FBS. For his career, Huff now has 117 total QB pressures, including 16 sacks.

Roy has been at his absolute best for the 10-1 Bears. Prior to 2019, Roy had 34 total quarterback pressures on 436 pass-rush snaps. This season, the senior has 43 total QB pressures, including four sacks, on 352 pass-rush snaps. Those 43 pressures are the most among all FBS interior defenders.

Seniors are hard to come by on the Aggies' roster, as only three get meaningful snaps. Oliver has been really good in the slot in 2019 and is having his best season in coverage. He’s allowed only a 41.7% completion rate and 52.4 passer rating on the 36 targets into his coverage. He also has six pass breakups and 23 total pass breakups in his career.

Like Oliver above, the three-year starter Nawahine is having his best season in coverage. The 32.0 passer rating into his coverage is the fifth-best in the FBS and is the best mark of his career.

The Graham Harrell offense has greatly benefited Pittman Jr. His current 2019 total of 95 receptions is 25 more than he had in the previous three years combined. He’s been especially dominant the last three weeks, catching 37-of-45 targets for 424 yards and three touchdowns. Further, he has only three drops on 122 targets.

Despite not getting into the end zone often (only two touchdowns), Jones has still been the Cyclones' and Brock Purdy’s go-to receiver. His 69 receptions on 85 targets are team-highs, and 41 of those receptions have gone for a first down. His 81.2% catch rate is fourth-highest in the FBS. 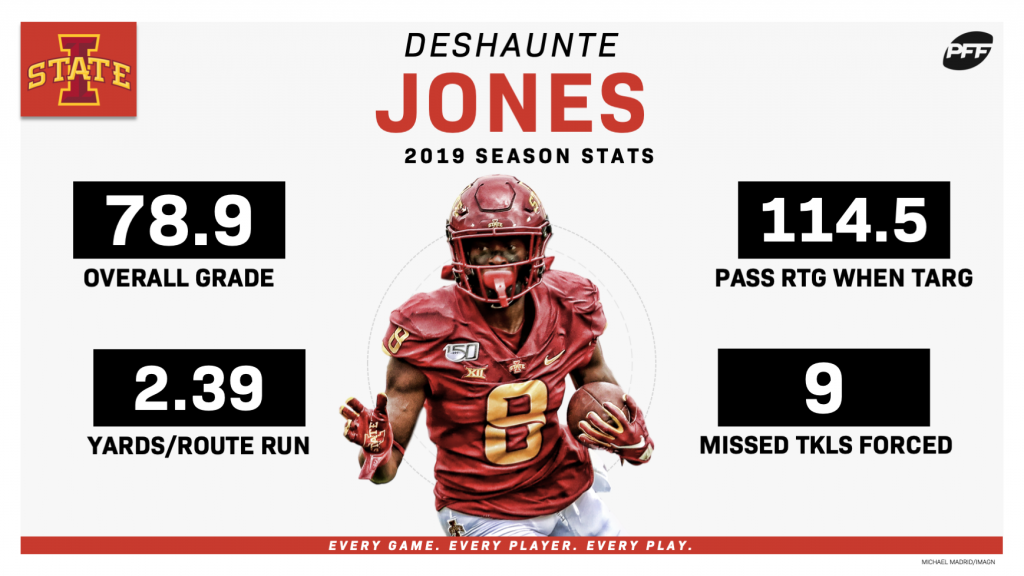 Another senior saving his best for last, Bryant has a career-high overall and coverage grade going into the Huskies' final regular season game. His 87.9 coverage is good for the 13th-best among safeties. In addition to his third consecutive season with over 700 snaps, Bryant has the 10th-best passer rating allowed into his coverage among safeties (40.9).

The four-year starter, who's logged over 2,300 snaps for the Cavaliers, saved his most productive season for his last. In 2019, Hanback has a career-high pass-rush grade to go along with career-highs in total quarterback pressures (23) and sacks (six). In addition, Hanback has yet to miss a tackle this season.

The Hokies are rolling, and if not for a one-point, last-minute loss to Notre Dame, they would be on a seven-game winning streak. While Floyd might not be the Hokies' highest-graded player, he is the lone senior and brings over 2,200 snaps of experience. For his career, he’s only allowed a 56.3% completion rate on 103 targets into his coverage and has six of his career eight pass breakups in this his final season.