With our look at the highest-graded returning players on the best teams in college football underway, it’s time to turn our attention to one of the squads looking to catch Georgia in the SEC East: the Florida Gators.

They registered big wins against LSU and Florida State throughout the season but really capped the year off well with a dominant victory over Michigan in the Peach Bowl, cementing their position as a top-10 team in the nation at the season’s end. Now, with head coach Dan Mullen heading into his second season in Gainesville, it’s about how they kick on and attempt to become a contender. 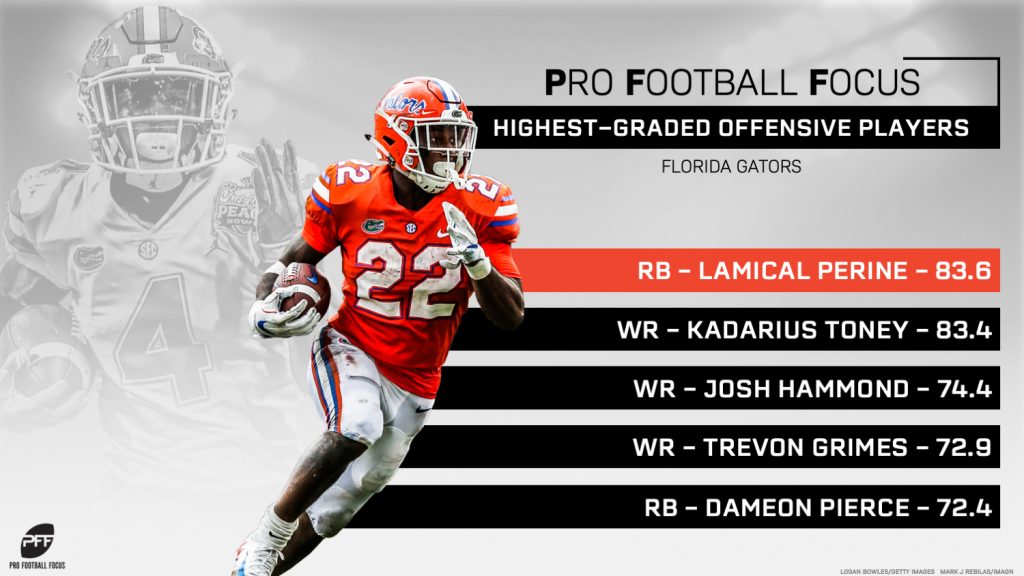 Quarterback isn’t a strength right now for Florida, with Feleipe Franks producing just two games with a PFF passing grade of 80.0 or higher. They can mask some of his shortcomings with the talent around him though, and with four wide receivers producing PFF grades of 70.0 or higher in 2018, they have that. Kadarius Toney is someone they should aim to maximize touches for after he forced five missed tackles on just 25 receptions a year ago. He has yet to drop any of the 40 catchable passes thrown his way during his time at Florida and can make things happen on the ground too, forcing seven missed tackles from 22 carries in 2018. As a receiver, 17 of his targets came behind the line of scrimmage last year, but with his ability to make people miss in space, he can produce big plays for this offense.

Lamical Perine leads the rushing attack, coming off a season where he averaged 6.1 yards per carry, with 3.3 of those yards coming after contact on average. One concern here though is that he forced just 17 missed tackles from 134 carries and Florida lost their top run blocker, offensive tackle Jawaan Taylor, to the Jacksonville Jaguars in the NFL draft. If he has to create more yardage himself, will Perine be able to find the big plays needed for the Florida offense?

The highest-graded returning players on defense for Florida:

Defensive back Chauncey Gardner-Johnson is now in the NFL, but the Gators appear to have the talent to help replace him. Safety Brad Stewart Jr. was impressive in flashes last year, producing big performances in coverage against Tennessee and LSU. Cornerback CJ Henderson didn’t allow a touchdown in his coverage from 365 plays in pass defense and proved himself as someone who can make plays on the ball, coming away with an interception and six pass breakups.

Edge defender Jeremiah Moon is one to look out for this year, particularly if he sees an expanded role. From just 104 pass-rushing snaps in 2018, he racked up a sack, three hits and 13 hurries, averaging a pressure once every 6.1 pass-rushing attempts. He also added a batted pass, and with the loss of Jachai Polite, they will need big seasons from him and fellow edge defender Jabari Zuniga.