The Week 4 Eckrich Big Ten Team of the Week powered by PFF saw some impressive performances and, of course, the strength of opponent also factored into the overall selections as did the PFF player grades. 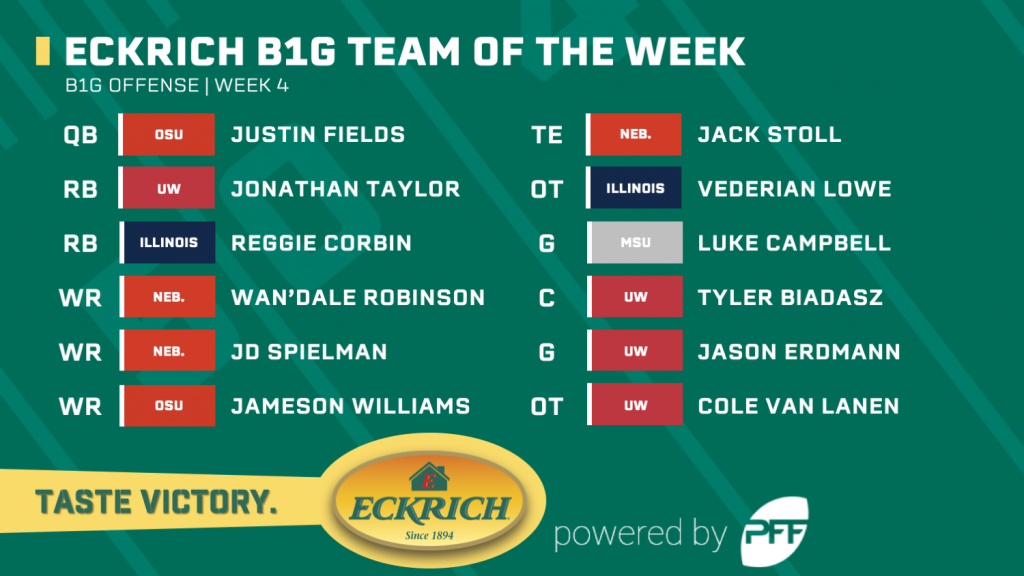 This appearance marks Fields’ third week on the Eckrich B1G Team of the Week — and for good reason. The OSU quarterback wasn’t afraid to throw the deep ball Saturday, as he earned the top spot in the Big Ten with a 14.8 average depth of target. As a result, the Heisman hopeful continued his 2019 campaign with an 85.0 offensive grade across 43 snaps while picking up a W in the process.

Taylor's first-half performance alone against Michigan could have warranted a spot here, but he finished the game with 203 yards on the ground and 10 rushing conversions. He had two touchdowns and eight more first-down runs, cementing his status atop the running backs in the country in terms of Heisman candidacy in a huge win for the Badgers.

Corbin couldn’t be brought down Saturday against Nebraska. Although the game ended as a loss for Illinois, Corbin continued to live up to the hype, as he totaled 80 of his 134 yards after contact en route to a 6.7 yards per carry mark.

Earning a spot on the Team of the Week as a Big Ten receiver is no easy feat considering the loaded class the conference comprises, but Robinson is deservedly here. Nebraska quarterback Adrian Martinez targeted the receiver 11 times, which Robinson then turned into an 82.6 grade, nine receptions and two scores. His six first downs tie for the most in the Big Ten alongside his Nebraska counterpart, who is the next name on this list.

It was quite the day to be a Nebraska wide receiver on Saturday. Spielman amassed a conference-high six explosive plays that went for 15-plus yards, as well as two contested catches on seven receptions. The Nebraska receiving corps couldn’t have had a larger impact in their close victory over Illinois.

Williams earned the highest receiving grade among all Big Ten pass-catchers this week, and he did so on just two targets. Don’t let the small sample size fool you — the Ohio State receiver accumulated two receptions, 74 yards and a score. Williams merited a perfect passer rating (158.3) when targeted on Saturday in the Buckeyes’ win over Miami Ohio.

Our next installment of a Nebraska pass-catcher on the B1G Team of the Week is tight end Jack Stoll and his 158.3 passer rating when targeted. On his three receptions, Stoll ripped off two plays that went for 15-plus yards and moved the chains three times in the process.

Lowe was clearing any and all lanes for Reggie Corbin, as he earned the top spot with a 77.7 run-blocking grade against Nebraska. The Illinois offensive tackle did his part in keeping Brandon Peters clean, making it through the game with zero pressures allowed and a 100.0 pass-block efficiency rating.

Like Lowe, Campbell made it through 32 pass-blocking snaps unscathed, as he allowed zero quarterback pressures on his way to a 100.0 pass-block efficiency rating. Campbell’s success will be pivotal in Michigan State’s 2019 campaign as they battle to stay among the top-25 teams in the country.

A clean sheet in pass protection and multiple lanes created for Jonathan Taylor proved to be too much for any other center to top Biadasz this weekend, as he finished with plus-grades across the board in yet another dominant outing.

Erdmann is the second player of all five Wisconsin linemen to make either the first or second B1G Team of the Week lineups. He was dominant across 68 offensive snaps and played a significant role in the authoritative unit that is the Wisconsin offensive line in their commanding win over Michigan. 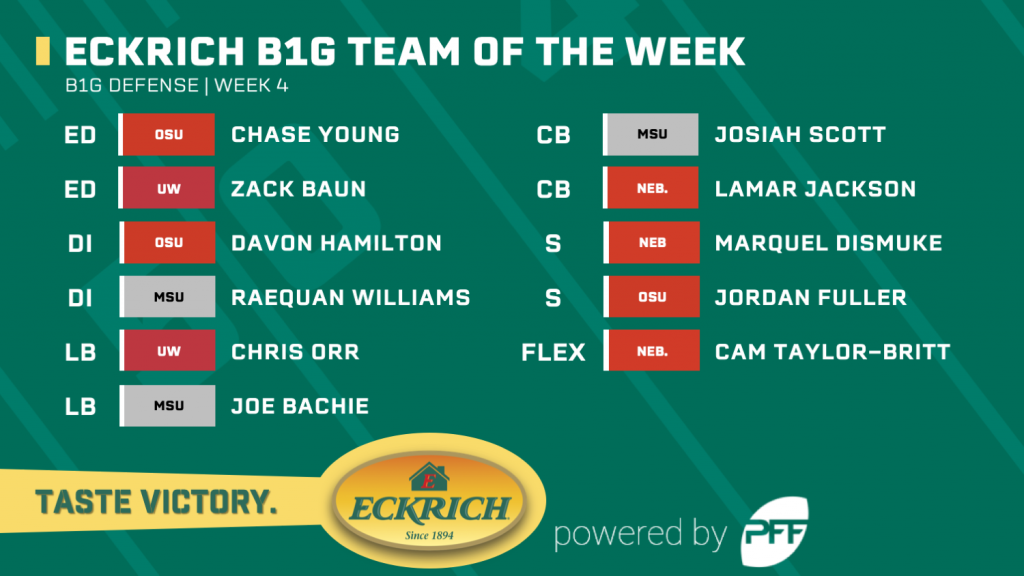 Winning 40% of his pass-rush attempts, Young had an elite day rushing the passer against Miami (OH). He had two strip-sacks, one coming from the right and another from the left as he finished the game with four pressures, two sacks and two hurries on just 16 pass-rush attempts before his day was over.

Baun recorded a sack, two hits and two more hurries in his pass-rush effort, with five more defensive stops to his credit in run defense. He's joined by teammates on the Team of the Week here, as their performance against Michigan is one for the ages.

Ohio State blew out Miami (OH), and Davon Hamilton played an extensive role on defense in that one-sided affair. Hamilton was lock-down in the run game, as he earned a top-three run-defense grade at his position while executing two defensive stops.

Williams continued his 2019 tear in all facets of the game on Saturday versus Northwestern. The Michigan State standout recorded positive grades in both pass-rush and run-defense and refrained from being penalized all day. The interior defender is the first of many Spartans on this list, and #99's achievements in this game are starting to become a regular occurrence.

The youngest of four Orr brothers, Chris lived up to his NFL pedigree in this one, playing double-digit snaps across each facet on defense. On 12 snaps in run defense, Orr recorded no missed-tackle attempts and two solo tackles. He blitzed the passer 13 times and came home with a whopping three QB hits and another hurry. And on 42 snaps in coverage, Orr was targeted twice, allowing just five yards — including negative yards after the catch — and coming away with two PBUs in the contest.

No stranger to our Team of the Week, Bachie was dominant for the Spartans, recording 11 solo tackles and nine defensive stops, the latter leading the Big Ten. He chipped in with a sack, a hit and one more QB hurry on seven blitzes, as he was stout in all three facets of play.

Josiah saw game-action on 75 defensive snaps, 42 of which were plays when he dropped back in coverage and was not short of work. He was targeted on 14 different occasions but allowed a reception just 28.6% of the time (four receptions). The cornerback forced two incompletions and snagged an interception — all while not missing a tackle.

Jackson played press coverage on 20 of his 27 coverage snaps on Saturday afternoon, which resulted in only two targets coming his way. Zero yards, zero touchdowns and zero first downs allowed is enough to earn yourself a spot on this list, and Jackson does so just one week after making the National Team of the Week.

Nebraska got another victory on the heels of strong coverage, limiting Illinois to just a 49.5 passer rating as a team. Dismuke played an integral part in the win, as he didn't allow a single reception on four targets and came away with three pass breakups as the primary defender. He made seven solo tackles, five defensive stops and didn't miss a single tackle.

Fuller let no player get behind him on Saturday, as his 74.4 coverage grade played a pivotal role in Miami’s offense being held to zero touchdowns. Fuller recorded 22 coverage snaps and surrendered a mere four yards on one reception. Of course, he also managed not to miss a tackle throughout the entirety of the game.

Nebraska's Taylor-Britt came down with an interception as the secondary had a big day. Taylor-Britt was targeted twice on the afternoon and didn't allow a single reception while coming down with the pick and another pass breakup. He chipped in with a stop in run defense to round out his strong day.