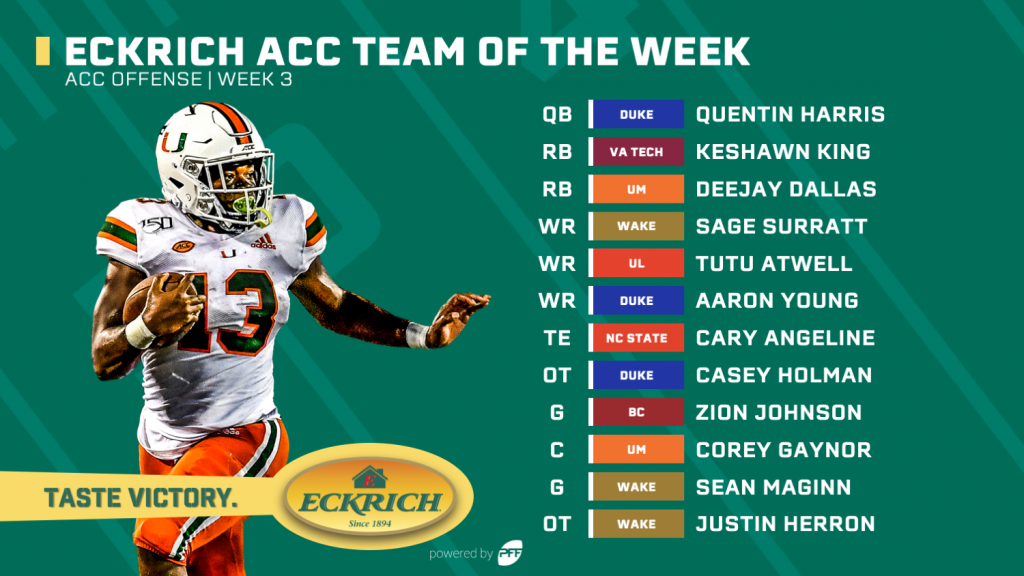 Completing his passes at a high rate, Harris finished the day with a ridiculous stat line that read 24-of-27 for 237 yards and four touchdowns. He littered the field with beautiful passes all day long to breathe some potential into their conference slate.

King needed all of 12 carries to reach 119 yards on the ground and though he didn't score a touchdown, half of those carries moved the chains for a first down. He broke four tackles and even gained an average of 3.67 yards after contact per attempt.

The entire Miami offense got things rolling but it was Dallas who nabbed the start and really took advantage of the lesser competition in Bethune Cookman. He notched three rushing scores on just 12 carries with 108 total yards and two broken tackles on the day before resting for what felt like the majority of the game.

Friday night's brother vs. brother matchup between Sage and Chazz Surratt lived up to the billing with Sage ultimately coming out on top both individually and in the game. Sage caught all nine catchable passes thrown his way on 14 targets for a conference-best 169 yards through the air. He scored a touchdown and secured five first-down receptions in a dominant performance.

Atwell's coming out party saw him grab three scores, more than he had all of last year, finishing the day with 145 yards through the air on five catches. He racked up 67 yards after the catch and saw a perfect 158.3 passer rating on his targeted passes.

Young's circus catch in the end zone summed up the day perfectly for the Blue Devils as he finished the night with five receptions for 88 yards and two scores. Two more of his receptions moved the chains for a first down as Duke looked sharp through the air.

On five targeted passes, Angeline turned those into four receptions for 74 yards including 23 yards after the catch. He scored a touchdown and moved the chains two more times on his receptions as he was a bright spot in NC State's effort against West Virginia.

Holman had an elite run-blocking grade for the Blue Devils and also finished the afternoon by not allowing a single QB pressure on his 27 snaps in pass protection.

Gaynor was strong in the game against Bethune Cookman, not allowing a single QB pressure on 30 reps while leading the conference in run-blocking grade from centers.

Maginn was sharp early against North Carolina, allowing just one pressure on his 17 reps in pass protection while holding a positive grade in the run game, as well.

Herron has yet to allow a pressure over the past two games, a marked improvement over the past few seasons as he finished the UNC game with an elite pass-blocking grade of 86.1. 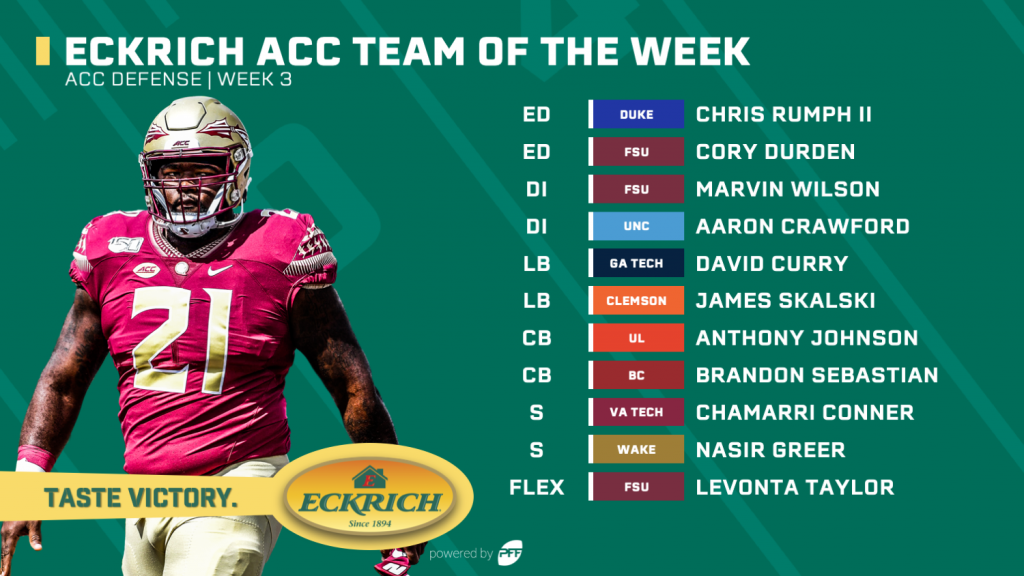 Durden also makes this list based upon his pass-rushing, leading the conference with 11 total QB pressures

The game didn't go the Seminoles way but Wilson has dominated in all three games regardless of the outcome for FSU. Wilson recorded seven total pressures against Virginia and had it not been for a late penalty in the game, would have had one of the better games from an interior defender all season long.

Crawford has exploded onto the scene this season for the Tar Heels, recording two defensive stops on five total tackles against Wake on Friday night. He didn't miss a single tackle in this contest and had plus-grades in each facet.

The Yellow Jackets had to go up against the option offense, and despite losing to The Citadel, Curry had a dominant performance that saw him rack up 10 defensive stops on 14 total tackles without a single whiff. He was targeted once in coverage and had an interception to boot.

Clemson blew out Syracuse in the end and Skalski was a big reason why on defense, recording seven total defensive stops including two sacks and five more in run defense. He allowed all of 17 yards in coverage and had four total quarterback pressures on the afternoon.

Johnson was the most-targeted cornerback in the ACC this past weekend, seeing 11 passes come his way. He did allow eight receptions, but they totaled just 70 yards without a touchdown allowed while he had two passes broken up in coverage in a strong outing.

The game didn't go their way against Kansas, but Sebastian was not a reason why on the backend. He made four total tackles, two coverage stops, didn't allow a targeted pass his way to be caught and had an interception on the evening.

Conner racked up 11 total tackles without a miss while making nine defensive stops against Furman. He was targeted six times in coverage and he allowed just 22 yards including just two yards after the catch.

Greer was dominant across the board, making nine solo tackles and four defensive stops. Of the three targeted passes his way, he allowed 32 yards and only three yards after the catch against UNC.

Taylor made the first half's biggest play for the Seminoles, thwarting a potential Virginia scoring drive with a ball-hawking interception as he also chipped in with a quarterback pressure and three total tackles in coverage without a missed attempt.