Building the best team from the College Football Playoff

Fantasy football is fun in that you can play as a virtual general manager of your own team. So we decided to take that to another level by using the PFF play-by-play grades to select the best possible team from all the units participating in the College Football Playoff. We take a look at the players in each of the position buckets from LSU, Ohio State, Clemson and Oklahoma to build a super team, utilizing the best group from each position in the process.

When building our College Football Playoff super team, we looked at depth, star power and how the units have played this season. So, without further ado, here is the talent-laden squad:

The nation’s top player is without a doubt Joe Burrow. As such, LSU grabs the top spot for quarterback — no other signal-caller was able to outdo Burrow in 2019. It doesn’t matter where Burrow was throwing the football or how frequently, he was hands down the nation’s best in 2019, proven by any number of metrics you pull from the PFF database. He was the nation’s top quarterback under pressure or when kept clean, the nation’s top quarterback to any level of the field and the nation’s best at hitting big-time throws at will. There are any number of superlatives you could don Burrow with this season, but we’ll leave it at this: With a national championship victory, Burrow’s 2019 season will be the most decorated college football season from a quarterback that we’ve ever seen. 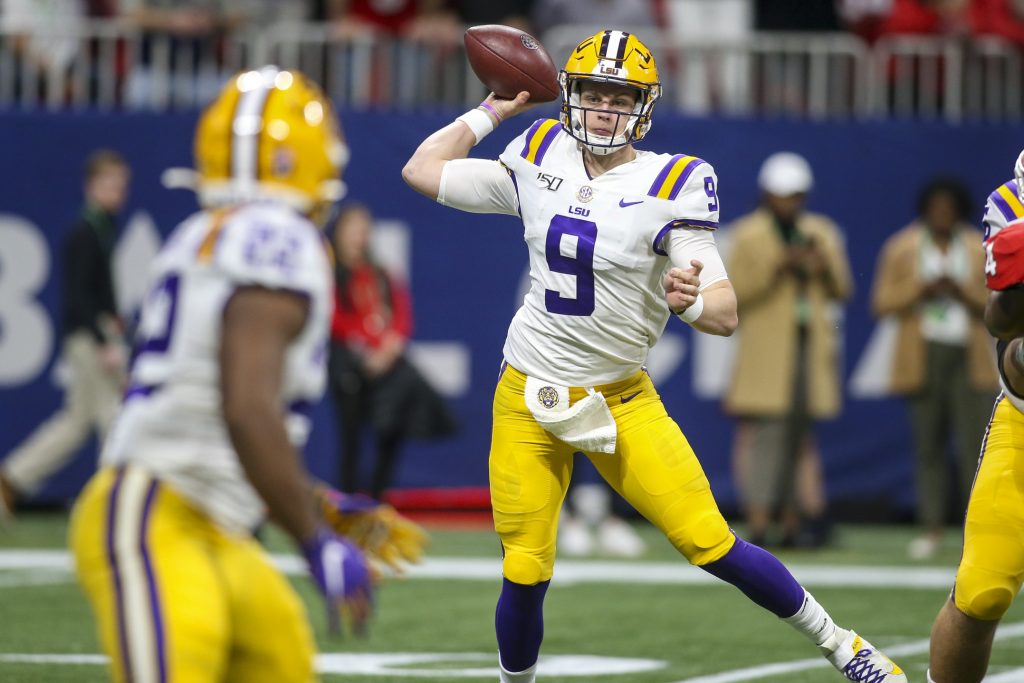 This was arguably the hardest decision of the whole lot, but we have to side with Etienne, who shed tacklers at a higher pace than we’ve ever seen at the college level. Of his 181 carries this season, Etienne broke a whopping 84 tackles, forcing a missed tackle on 45% of his attempts to shatter the previous record of 33% by David Montgomery. Dixon is no slouch, either, as he took 102 carries for 619 yards and broke 25 tackles of his own. They’re both talented receivers out of the backfield, too, and thus get the edge over any other duo of these four teams.

The Tigers have the best trio of receivers in the land, a trio good enough to even challenge Alabama's wideout unit this year. Chase, the Biletnikoff Award winner, leads the group. But any team that has sold short the efforts of Jefferson or Marshall has paid big time. Chase ripped off 18 touchdown receptions and 1,498 yards to lead all players in the playoff, forcing 21 missed tackles in the process. Jefferson was the nation’s top receiver on crossing routes and Marshall converted 32 of his 37 receptions into a first down or touchdown in 2019.

Moss crushes all the other talented tight ends in this playoff with his sheer volume and big-play moments. He’s had fumble issues this season, but his highlight-reel moments and clutch plays have come up big time and time again. His toe-tapping catch is one thing, but his continual moving of the chains — 16 first-down receptions — show his value on every down for Burrow, especially considering he hasn’t dropped a single catchable pass thrown his way all season.

The way the Tigers utilize their tackles is something to behold, but the way the three have played this year is something else. McFadden is the highest-graded tackle of the whole lot, finishing with an elite run-blocking grade and allowing just six pressures on 167 pass-blocking snaps. Carman hasn’t allowed a sack all season long, and Anchrum has allowed just seven pressures on his 367 snaps in pass protection. If any duo (or trio) is going to stop Chase Young one-on-one, this group seems to be the most likely to do so. They’ll need to bring their A-game, but one thing is for sure: Anchrum’s impressive 85.1 pass-blocking grade will certainly be tested. We give them the benefit of the doubt in what is must-watch TV.

Another close race for this one, the trio of Davis, Jackson and Myers edges out Damien Lewis, Adrian Magee and Lloyd Cushenberry of LSU on the back of Myers’ solid play at center. Davis is one of the nation’s best guards, and Jackson has rounded into form late in the campaign after transferring from Rutgers this past offseason. Together, Davis and Jackson have allowed just one sack or hit all season long on a combined 807 pass-blocking snaps, and both have dominated in the run game, too. Myers, who made it on our list of top underclassmen in the playoff, has been just as strong, allowing 14 pressures on 404 pass-blocking snaps while putting forth well-above-average grades in the run game.

It really didn’t matter who was lining up inside for the Buckeyes in 2019 — they all produced. While the top two guys at Oklahoma (Neville Gallimore, Marquise Overton) and LSU (Tyler Shelvin, Neil Farrell) certainly gave pause to the Buckeyes taking the spot here, it was the massive amount of snaps played, and played at a high level, for these five Ohio State interior defensive linemen that earned them the nod. Each player played at least 200 snaps this season, as the rotation pitted each to their strengths. Cornell led all interior linemen in pass-rushing grade, and Landers finished second in run-defense grade. Together, the five Ohio State linemen accumulated 66 quarterback pressures, including 12 sacks and 13 hits, while their 55 defensive stops clearly topped the other units.

This is another unit where, surprisingly, depth was the more important factor save for the fact that Chase Young was the highest-graded player regardless of position this season. Young single-handedly put forth more pressures than any two other edge players in the playoff, as his 51 total pressures were watered down by his 18 sacks and absurd near-30% pass-rush win rate. Young was as dominant as any player we’ve ever seen along the edge, and that goes without mentioning Smith, Friday or Harrison, who each had multiple sacks or hits on the quarterback. 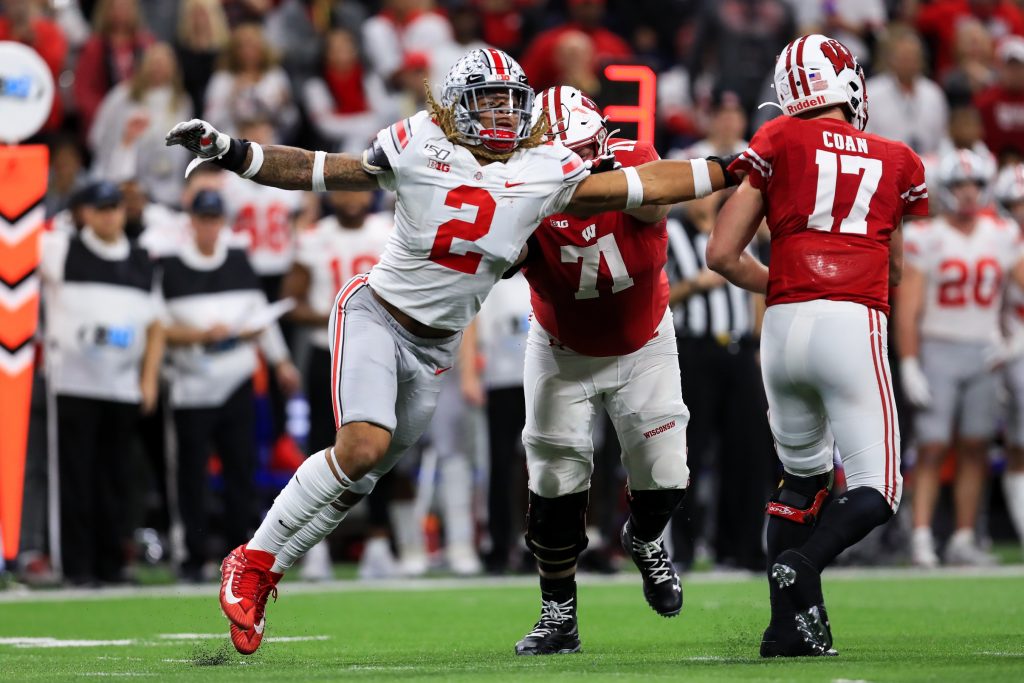 Each team has a star at linebacker, but none have the depth that the Ohio State defense does. Harrison is a do-it-all linebacker who recorded 15 pressures and 47 defensive stops while also putting forth strong grades in coverage. Borland’s strength is in run defense, where he made several noteworthy stops while Werner limited missed tackles and chipped in with a 50% completion percentage allowed on 32 targeted passes. Clemson linebacker Isaiah Simmons is a stud, Oklahoma linebacker Nik Bonitto is the best in coverage and LSU linebackers Patrick Queen and Jacob Phillips are dominant tacklers, but no unit has three-deep like the Buckeyes' defense.

This one was another tough choice, but the simple fact that Stingley and Fulton are the two highest-graded cornerbacks among the four teams gave little thought elsewhere. Vincent has been strong as of late, and Flott has shined in limited time — but it’s the Stingley show for the Bayou Bengals. Stingley is the highest-graded cornerback in the entire country and has played outside of his age all season long, locking onto opposing teams' No. 1 wide receivers with seemingly relative ease. Save for a few lapses in coverage that have gotten blown out of proportion (see Alabama game vs. DeVonta Smith), Stingley has locked down in coverage and has an elite 91.8 coverage grade, with 21 total plays on the ball compared to just 34 completed passes into his coverage. Fulton joins just Jeffrey Okudah as the second-highest graded cornerback in coverage grade and the only three with elite coverage grades for 2019.

This is where we give the Clemson Tigers their due, as Simmons lines up at free safety or as a box safety as much as he lines up anywhere else on the field. He was our vote for the most versatile player in college football this season for good reason, as he was incredibly efficient across every position he played — particularly in coverage, where he allowed just 190 total yards on 294 snaps. Muse was strong against the run, and Wallace was a top player in coverage, allowing fewer than 50% of the passes thrown his way to be completed. Turner and Johnson have also shined in their time on the field, limiting missed tackles and chipping in with multiple plays on the ball in coverage, too. This is as deep of a safety group as there is in the country, not just the playoff.

Turner-Yell has recorded two solo tackles without a miss on kick/punt coverage this season while Willis is our highest-graded player between the four teams on special teams overall. Lamb is as dangerous as any player in the country if he gets to return a punt, and Brown has been strong on kick returns, averaging 17.8 yards per return. Mundschau averages the best hangtime of all four punters, as well, leading the way with a net punt average of 40.5 on his 33 punts while having allowed just 38 yards on returns all year long. This all goes without mentioning who would’ve been our pick for the Lou Groza Award in Brkic, as the Sooners' kicker did not miss a single attempt this year. He was a perfect 48-for-48 on extra points and 17-for-17 on field goals, including going 4-of-4 on attempts longer than 40 yards. Brkic was automatic whenever the Sooners crossed the 33-yard line.