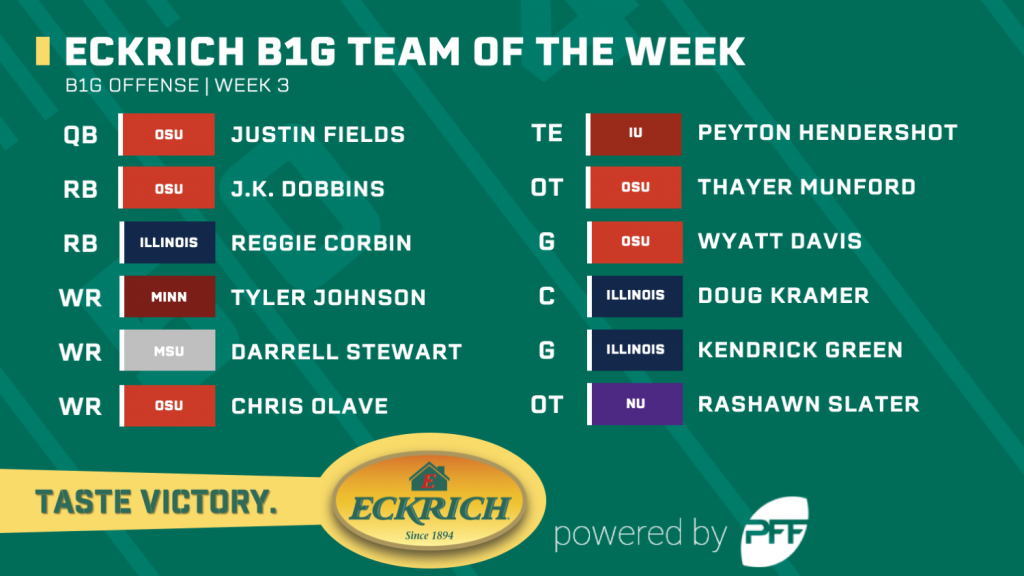 His first Big Ten road test under his belt, Fields looked every bit the part of elite starting quarterback in this one, racking up 93.5% of his passing yards through the air. He completed 14 passes for 199 yards and three touchdowns in the rout while rushing for another score as well.

Dobbins' highlight-reel montage got another this weekend with a stiff-arm for the ages on his way to the end zone. For the afternoon, he totaled 193 yards on 22 carries including a touchdown and seven more first-down runs. Dobbins seems ready to carry the load for the Buckeyes through Big Ten play.

On just 19 carries, Corbin totaled 152 yards and a touchdown with six more first-down carries. He broke five tackles on the afternoon and even gained 83 of his yards after contact in a terrific performance that saw him lead the conference in rushing grade at the position.

Johnson turned in his finest performance of the season, living up to his preseason All-American hype with a game-winning catch against upset-minded Georgia Southern. Johnson was targeted 12 times, caught 10 balls for 140 yards and even gained 75 of his 140 total yards after the catch.

Stewart was the most-targeted receiver in the conference with 15 passes coming his way. Of those, he hauled in all nine catchable targets for 121 yards and moved the chains on six receptions while breaking three tackles after the catch. He's now nearly eclipsed his entire 2018 season totals in receiving yards while he's already gained more yards after the catch through three games than he did all last season.

His biggest play not even showing up in the general box score, Olave blocked a punt so fast that the ball barely made it to the punter's foot against Indiana. He also had a big game through the air, catching three passes for 70 yards and a touchdown while both other receptions moved the chains for first downs.

On his five targeted passes, Hendershot ripped off 70 yards on four catches and a touchdown as he saw a perfect passer rating on targeted throws his way. He gained 32 yards after the catch and his 49-yard reception was really the Hoosiers' highlight of the day against Ohio State.

Dominant across 63 total snaps against Indiana, Munford allowed just two QB hurries and had the conference's top run-blocking grade among tackles. He wasn't penalized all day either in an all-around sharp performance.

Another strong performance from a Buckeye offensive lineman, Davis didn't allow a single QB pressure from his right guard spot while also possessing a top grade in the run game, as well.

There's a theme building here as two Ohio State and two Illinois linemen make the conference Team of the Week. Kramer kicks off the two Illini as he didn't allow a single QB pressure on 49 reps in pass protection while holding the conference's best run-blocking grade from centers.

Holding the Big Ten's highest run-blocking grade among guards, Green also allowed just one pressure on his 49 pass-blocking snaps as he had a great all-around performance for the Illini.

Slater didn't allow a single QB pressure on 35 snaps in pass protection while he had some impressive movement and pushes in the run game with a top-five run-blocking grade in the conference. 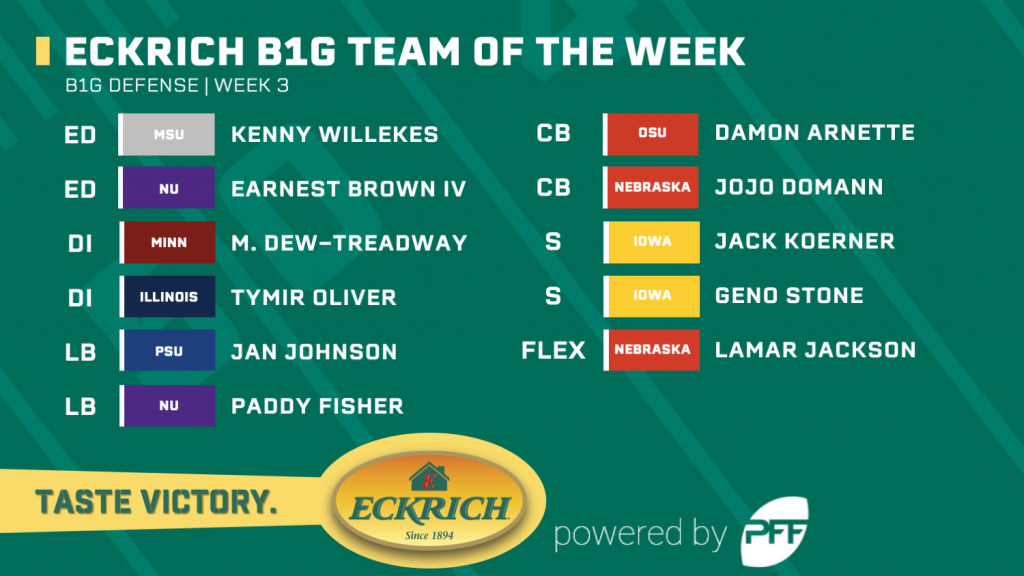 The Spartans didn't get the victory but Willekes and the defense made life miserable for Arizona State all day on Saturday. Willekes recorded seven total pressures including a sack and six more hurries. He missed a tackle, but that's how strong he was throughout the game to still earn the conference's highest grade among edge defenders.

His teammate had equally an impressive performance but Brown needed half the pass-rush attempts to earn the same amount of pressure as Gaziano did. On just 16 rushes, Brown secured six total pressures including two sacks while also recording a defensive stop and no missed tackles on the afternoon.

Oliver stuffed the middle of the defensive line for Illinois with great ease on Saturday, recording a defensive stop and two QB pressures as he required attention from multiple double teams all game long.

Dew-Treadway was stout in run defense for the Gophers against Georgia Southern's rushing attack, recording two defensive stops in the process. When they did drop back to pass, MDT recorded two pressures including a sack on just six pass-rushes.

On 37 total snaps, Johnson recorded four solo tackles without a missed attempt and chipped in with a sack on four blitzes. He made two total defensive stops and a forced fumble as he was all over the field for the Nittany Lions in the 100th meeting between Penn State and Pittsburgh.

Likely the first time of many times we'll see Fisher here, the All-Everything linebacker was dominant across the field for the Wildcats. He recorded two pressures, eight total tackles, three defensive stops, four plays on the ball in coverage — including an interception — and three pass breakups while he allowed just 28 yards on 32 snaps in coverage.

Arnette's pick-six was a thing of beauty as he stepped in front of the receiver and returned the interception nearly the length of the field for a touchdown. All told, he was targeted nine times against Indiana, allowing just three receptions for 29 yards and had the pick-six and two more pass breakups.

In coverage for 31 snaps, Domann was the primary coverage defender on four targeted passes and he allowed just three receptions for all of 13 yards. He didn't allow a touchdown and allowed a long reception of just six yards with a pass breakup to round out the day.

The Iowa safeties were strong in their rivalry game against the Cyclones as Koerner logged 41 snaps in coverage and was targeted five times as the primary coverage defender. He allowed just 32 yards and made two pass breakups as he and Stone were pivotal in limiting Brock Purdy and the Iowa State offense.

Stone was also strong in coverage, joining Koerner in such a feat. Stone allowed just 31 yards in coverage as he and his teammate listed here allowed just 15 total yards after the catch and six total defensive stops.

A true lockdown corner so far in 2019, Jackson was targeted seven times and allowed just two receptions. He gave up just 23 yards in coverage and recorded three pass breakups on his targeted passes.