Why betting early is critical to beating NFL markets

A generally accepted strategy in NFL betting is to place bets early in the week, and it's a fairly simple principle: As bettors make wagers, bookmakers adjust their lines, and those lines only become more accurate and thus harder to beat.

Waiting for a model to update or for an analyst to release picks late in the week can eat away potential value, which is why always-up-to-date models such as PFF’s Greenline are such powerful tools for bettors. With PFF Greenline, bettors can see where value exists early in the week before market activity sharpens lines.

Looking at how lines change throughout the week reveals just how important early betting is toward turning a profit.

A team’s market-implied win probability is a function of the break-even percentage on the moneyline odds less the hold the books take on those odds:

Closing line value (CLV) is the concept of placing a bet earlier in the week at better odds than where the line ultimately closes at kickoff. Since closing lines are so accurate, beating this number is a practical requirement for long-term profitability.

Potential CLV in a market can be thought of as the greater positive difference in odds between a pre-close line and the closing line. For instance, in last year’s Super Bowl, the Tampa Bay Buccaneers were given better odds — i.e., a lower winning percentage — earlier in the week than they were when the lines eventually closed. The markets had shifted by Thursday afternoon, 2.5 days before close, and the Kansas City Chiefs were receiving better odds than where their line eventually closed. 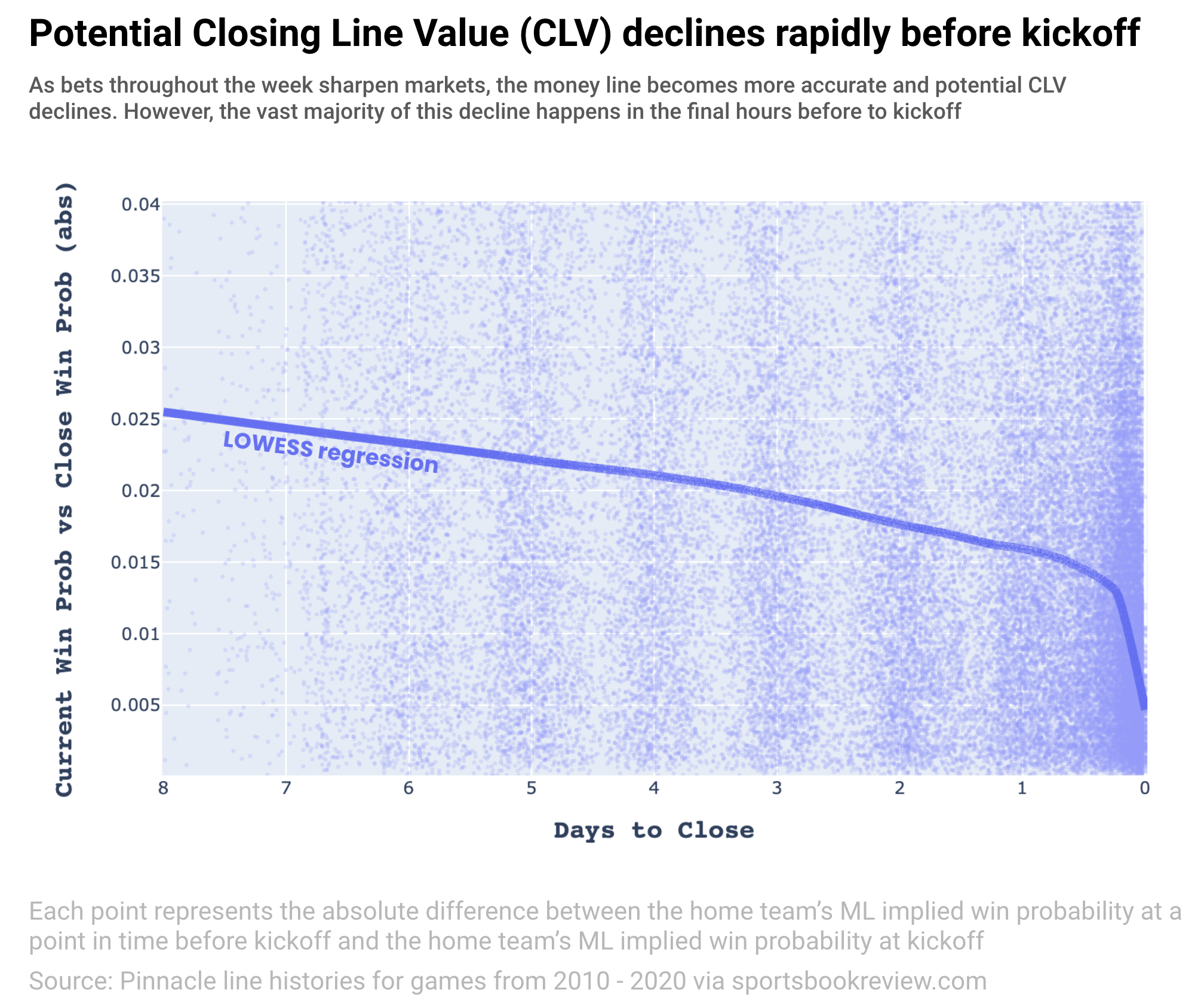 This price action is potentially due to the behavior of professional bettors who wait for bookmakers to increase betting limits right before kickoff to maximize the amount of money they can get down on games.

While the steep drop in potential CLV at kickoff has been a fairly consistent dynamic over time, early-week lines were more accurate over the last two seasons. 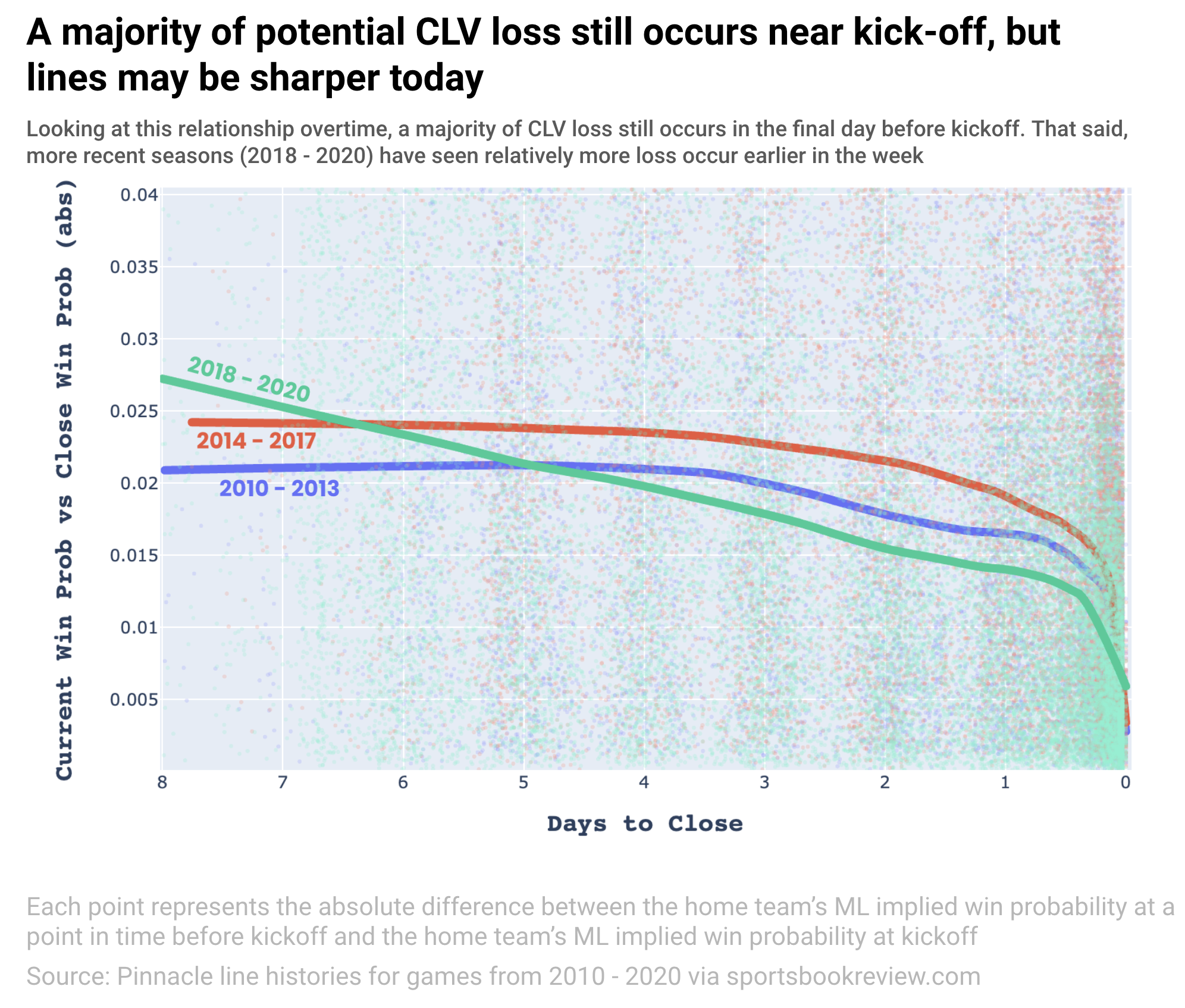 Since bettors aren’t betting against an average of all lines in a given week, it’s important to drill into this distribution to see the effect of market-sharpening on individual lines (i.e., potential plays).

Assuming a bettor needs to realize ~2.5% of CLV to cover the bookmaker’s hold over the long term, the percentage of lines that present “break-even-potential” CLV is cut in half between the start of the week and the point where potential CLV falls off dramatically before kickoff. 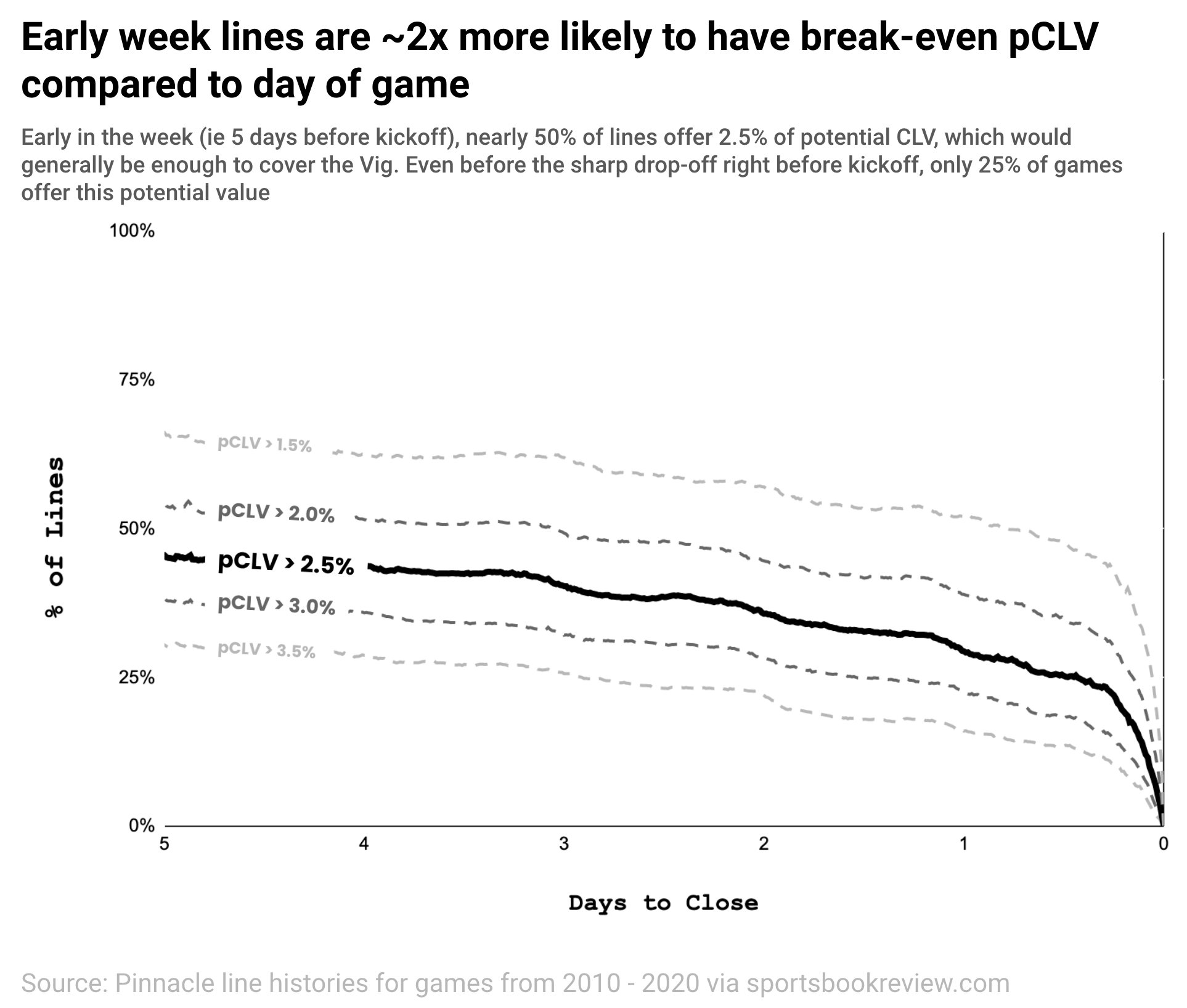 This analysis paints a fairly rosy picture of the opportunity that exists in NFL betting markets. While potential CLV may exist for half of the lines at the start of the week, realizing that potential CLV is quite difficult, as bettors don’t know with full certainty which lines are offering break-even levels of CLV.

If only 25%-30% of lines offer potential break-even CLV the day before kickoff, a bettor’s ability to realize break-even CLV at this point in the week is practically non-existent. A bettor who waits until this point to place bets is faced with the herculean task of being sharper than the closing line itself.

For bettors looking to maximize potential profit by making early plays, PFF Greenline is an invaluable tool. PFF Greenline combines PFF’s exclusive player grades, key injuries, market information and cover probabilities into a clear picture of value. More importantly, this tool is updated at the start of every week, enabling bettors to make plays before the market becomes too sharp.