NFL Betting 2022: Discrepancies across NFL power rankings and their impact to NFL betting

Team strength is at the core of most predictive models when it comes to attempting to accurately price the outcome of an NFL or college football game.

Almost every football site produces some sort of team ranking that tries to gauge the NFL pecking order at both the start of the season and throughout it. The betting market also calculates these power ratings to build point spreads and totals, which aids in pricing various derivative and player prop markets.

Pulling together several of these team-strength ratings — from a wide range of sources — gives bettors a range for where every team fits across the league. And comparing these metrics while also highlighting the current betting market's view helps identify obvious discrepancies for certain teams that may be over- or underrated.

If the rankings used are worthwhile, it can give bettors value opportunities in both the futures market and game spreads for Week 1 and beyond. And even if rankings aren’t entirely accurate, they provide a reasonable baseline on the public sentiment surrounding each team entering the 2022 season. 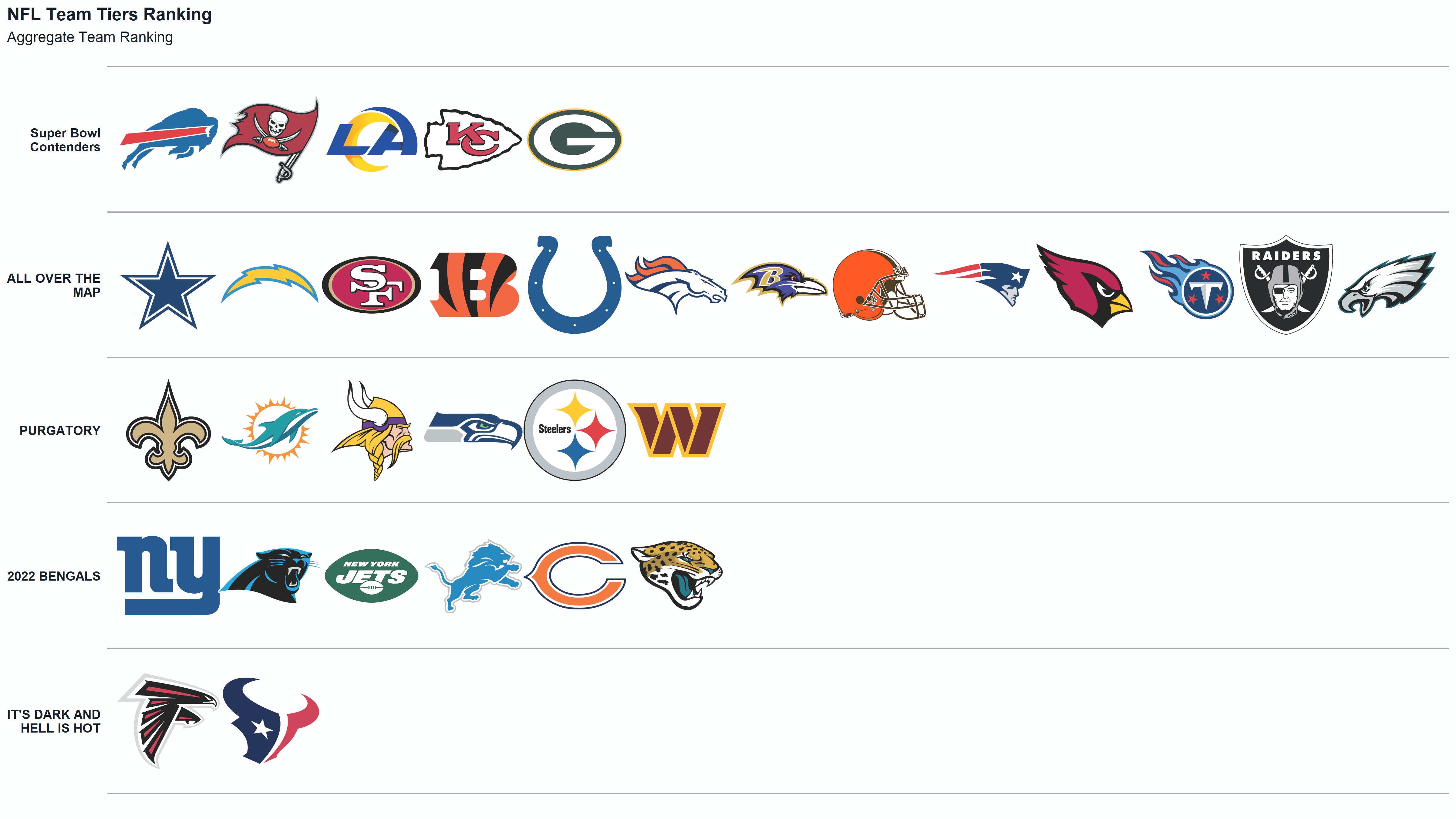 Everyone seems set on the top five teams in the NFL, with a clear distinction drawn from the rest of the Super Bowl hopefuls. All of these teams have at least a 70% implied probability of making the playoffs, with the Chiefs and Rams the only plus-priced to win their respective division.  Buffalo looks like the clear class of the league, as every updated rating system for 2022 has them as the No. 1 team.

The betting market deviates from the market-implied ranking in terms of Super Bowl odds, as the strength of the AFC forces an adjustment in NFC Super Bowl chances. The Chiefs are the second-best market-implied team, but with such a difficult schedule, they sit fifth in preseason Super Bowl odds. How No. 2 through No. 5 stack up is anyone’s guess at this time, but this range holds the best selections on who ends up as the 2022 Super Bowl champion.

ALL OVER THE MAP

Parity runs rampant in the NFL, with over half the teams providing some expectation to compete for a championship. This range is the toughest to order, with teams in this group ranking anywhere from No. 5 to No. 24.

DVOA even has Dallas as the top-rated team but hasn’t updated their numbers to reflect offseason changes. The San Francisco 49ers sit in a relatively tight range between No. 5 and No. 10, yet ESPN FPI pits them at 24th overall — a massive outlier.

The Chargers received plenty of buzz this offseason but still seem under-ranked in comparison to betting market expectation. They are priced as the most likely team to leap into the top tier; their futures numbers changed dramatically, with the best numbers long gone after an offseason in which they emerged as a clear winner. Backing them on some game spreads is the best approach if the betting market is correct in moving early on the Chargers.

The Broncos and Ravens both pop up when the focus is solely on the betting market, as both teams see a jump in ranking from the betting market outlooks compared to the site rankings. The bottom half of this range contains the most difficult teams in the NFL to project. Each team could potentially miss the playoffs, yet most offer enough upside to represent their respective conferences in the Super Bowl.

Some of the most interesting questions ahead of the season are which teams make the successful leap into the elite from this tier, and which teams drop down to start a potential rebuild?

Every team in this range is either breaking in a new coach or quarterback and could be closer to a rebuild than title contention. The hopeful outlook requires the quarterback in every situation to make a dramatic leap forward or for a veteran defense to carry a team to a first-round playoff exit — not exactly the stakes any NFL team wants to be playing for.

There are justifiable reasons to be higher or lower on certain teams in this tier, but outside of Miami, none look to be set up with the potential for long-term success.

It’s highly unlikely that a team will come remotely close to matching what the 2021 Bengals did from a tier-leaping perspective, but it does set up as one of the most entertaining offseason speculations.

Every team in this tier has hope that 2022 will be brighter than 2021, with the majority needing a second- or third-year signal-caller to make the leap to bona fide league star. If that happens, every team on this list except for the Bears has the talent at the skill positions to compete for a playoff spot in 2022.

IT'S DARK AND HELL IS HOT

Things could be heading in the right direction for both teams, but they still have a big question mark at the game's most important position. Until that happens, these teams will continue to compete for the first overall selection.