• Christian McCaffrey UNDER 17.5 LONGEST RUSH (-115 AT BETMGM): With Seattle fielding a top-10 run defense, expect Pete Carroll to force Brock Purdy to beat him through the air. If we see some stacked boxes for the home team, McCaffrey should experience enough hits at or near the line of scrimmage to limit his chances of breaking loose.

• Noah Fant UNDER 2.5 RECEPTIONS (+114 AT FANDUEL): After playing over 30% of offensive snaps in 12 personnel (one running back, two tight ends) on the year, the Seahawks ran six total plays in that personnel grouping last week.

Let’s dive into the best bets for Thursday night's NFC West showdown between the San Francisco 49ers  against Seattle Seahawks.

After the lookahead line pegged this game close to a pick ‘em, the early-week open landed at the preseason spread of +3. As we head toward kickoff, sportsbooks are split between +3 or +3.5, with juice shaded in the direction the half-point is given.

PFF's betting model finds some value on the 49ers -3 at -110, but few books are offering that spread and price combination. Adding the half point changes things dramatically for the 49ers, as PFF’s play-by-play simulation has a three-point 49ers win as the most likely outcome. And there are enough outlier wins for the 49ers that they look like the correct play from both of PFF’s projection systems at -3. 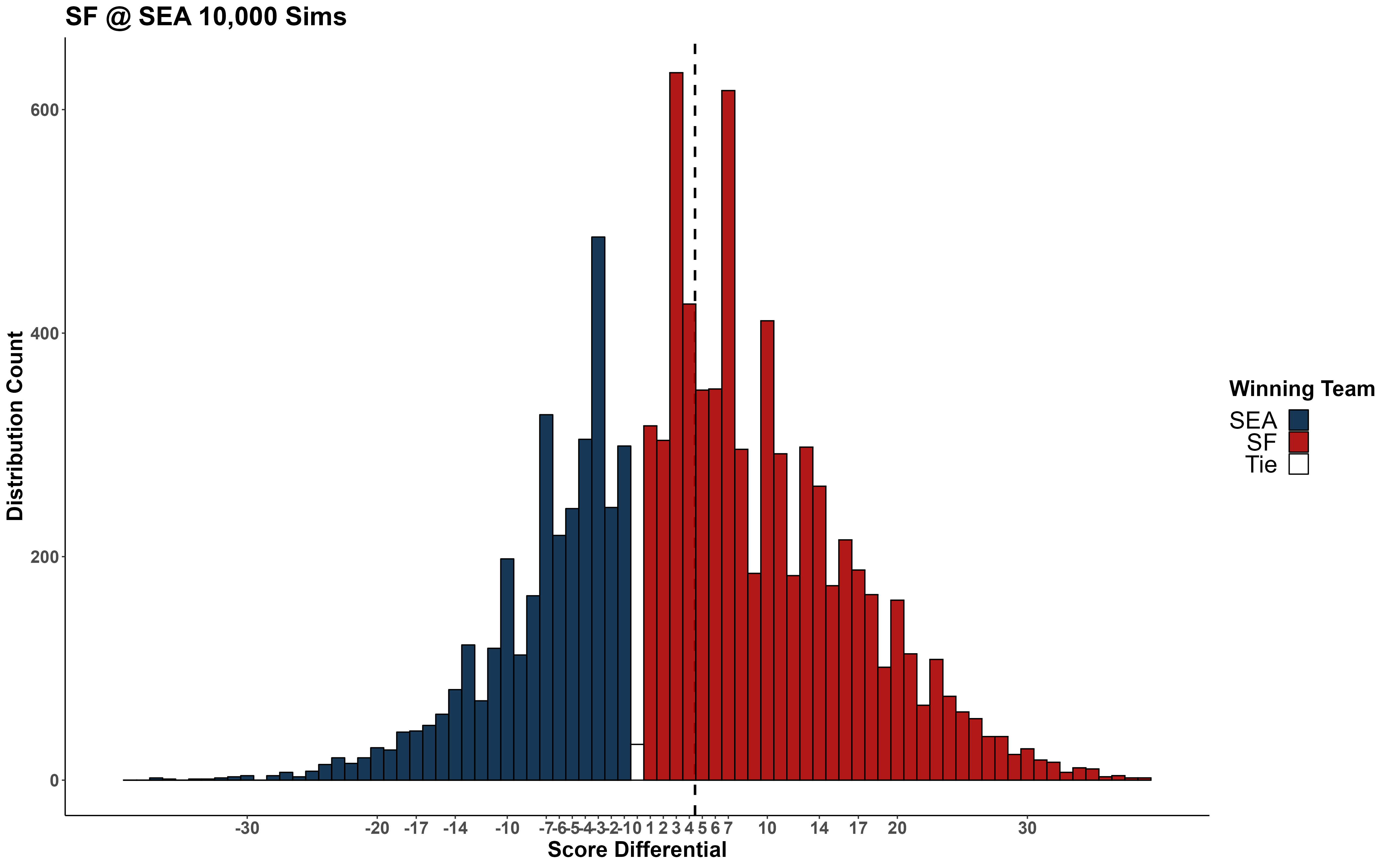 The total picked up some steam off the back of Brock Purdy’s quality first career start, as we are 1.5 points above the lookahead number with books locked into the 43-to-43.5 range since Monday.

Even though the 49ers defense enters this contest as the second-best unit in football, this game looks like it's headed for points. Both offenses rank in the top 10 in expected points added (EPA) per play and are adept at pushing the “easy button” for their quarterbacks — the Niners' and Seahawks' receiving units rank fifth and sixth, respectively, in passing yards to receivers who are open or wide open.

Defensively, the 49ers are league-average in these situations, with the Seahawks allowing the seventh most passing yards to receivers open or wide open. With chunk plays expected after the catch, we should be well on our way to going over this relatively low total if one or two break loose.

Player props continue to be one of the best approaches to betting on the NFL. If interested in macro trends from the past three seasons, check out my midseason prop article here.

One way to consistently find defined edges without blindly betting unders is by utilizing PFF's player props tool. The ability to adjust both number and price means you are always certain of the expected value for each prop bet. Let’s dive into the best player props to bet for the NFL Thursday night game.

Seattle shifted its offensive strategy last week, which could be attributed to the running back injuries impacting their scheme. After playing over 30% of offensive snaps in 12 personnel (one running back, two tight ends) on the year, the Seahawks ran six total plays in that personnel grouping last week.

A continued trend in that direction will severely limit both Noah Fant and Will Dissly. Dissly sunk to a season-low in the percentage of offensive snaps played, while Fant was at his lowest percentage since Week 3. Both ran routes at a season-low rate as the Seahawks shifted to a high percentage of three-receiver sets. 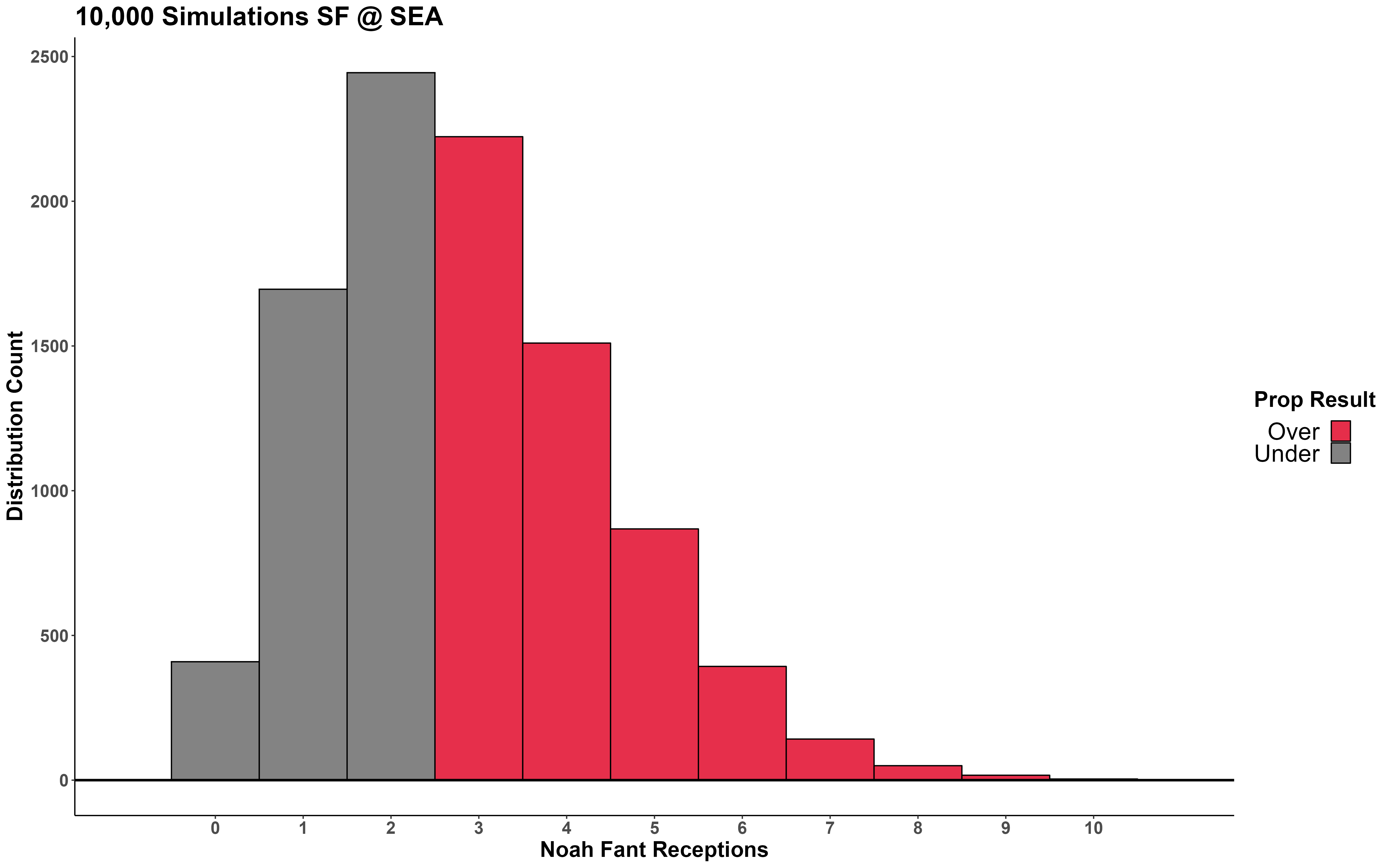 The under reception props for the tight ends are the highest-value offerings, according to PFF’s player prop tool. Fant's prop offers a little more wiggle room and finds consensus across both the prop tool and PFF’s play-by-play simulation.

At a +115 price, Fant to go under his reception prop looks like the best player prop target on Thursday night.

McCaffrey has gone over this longest rushing yard number in four of his six games since being traded to the 49ers. However, the question ahead of Thursday night is whether McCaffrey will have enough rushing volume to break one loose against a relatively stout run defense.

CMC still hasn’t hit over a 50% rush attempt share since his first game for the 49ers. And if the game script doesn’t play out exactly as expected, it’s then likely McCaffrey sees more usage through the air.

The Deebo Samuel injury also plays a role in this handicap, and although it could lead to an uptick in carries for McCaffrey, it makes more sense that it will lead to increased usage through target volume. 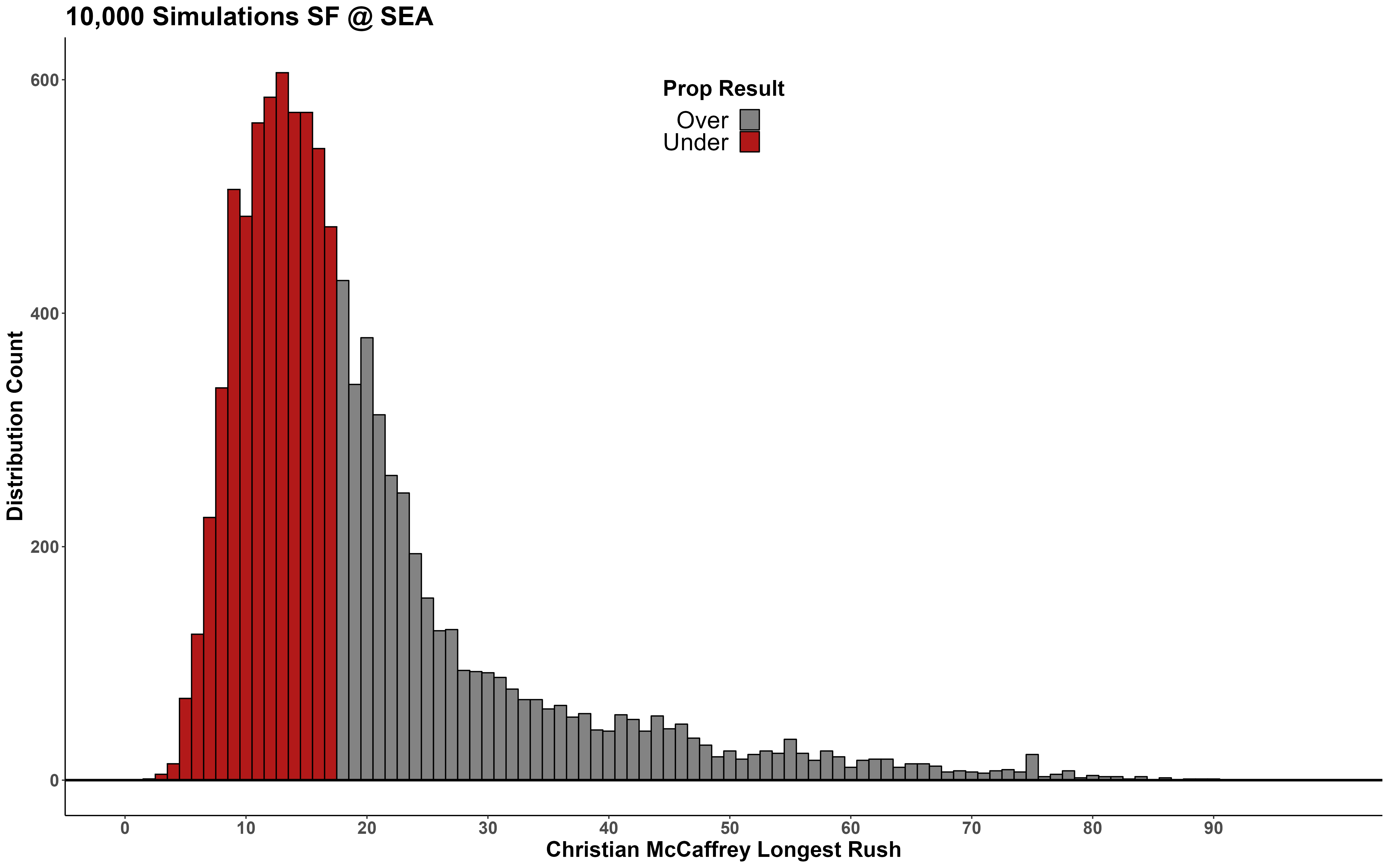 With Seattle fielding a top-10 run defense, expect Pete Carroll to force Brock Purdy to beat him through the air. If we see some stacked boxes for the home team, McCaffrey should experience enough hits at or near the line of scrimmage to limit his chances of breaking loose in the run game on Thursday night.