We are staring down the first players reporting to training camp with NFL news starting to heat up. This is the calm before the storm, as we should see NFL interest and news dominate the month of August.

This slow period has created an opportunity in the SimBull market, as prices have corrected over the past month with speculators cashing in gains from this bull run.

Trades have slowed to a halt in July with all three weeks seeing the lowest trading volume since March. 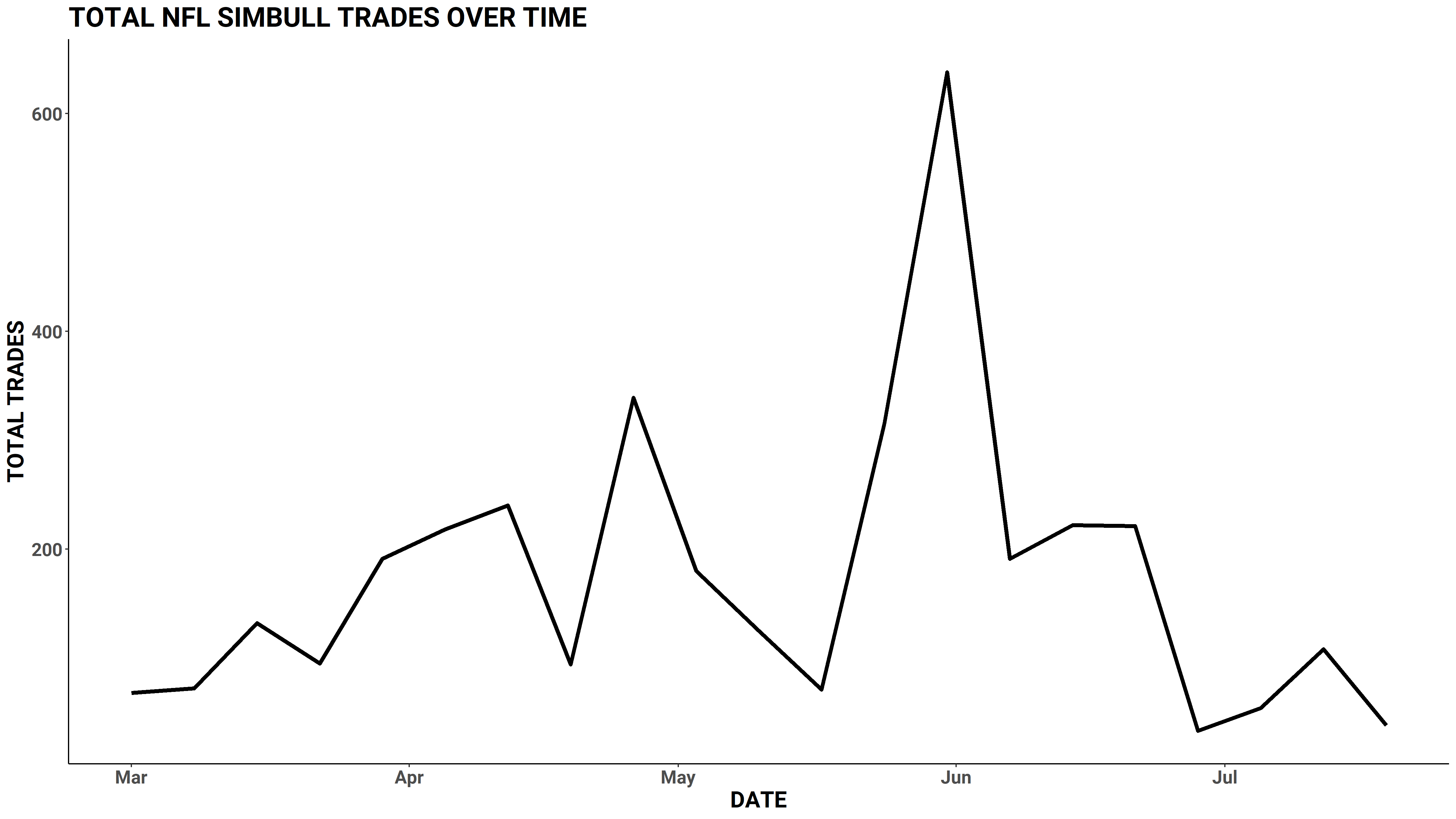 Like most investments, it pays to be buying when others are selling, which is why the week before training camp is the perfect time to get involved on SimBull. One of the easiest ways to find buying opportunities is to look at the teams that have experienced the highest and lowest trade volume. 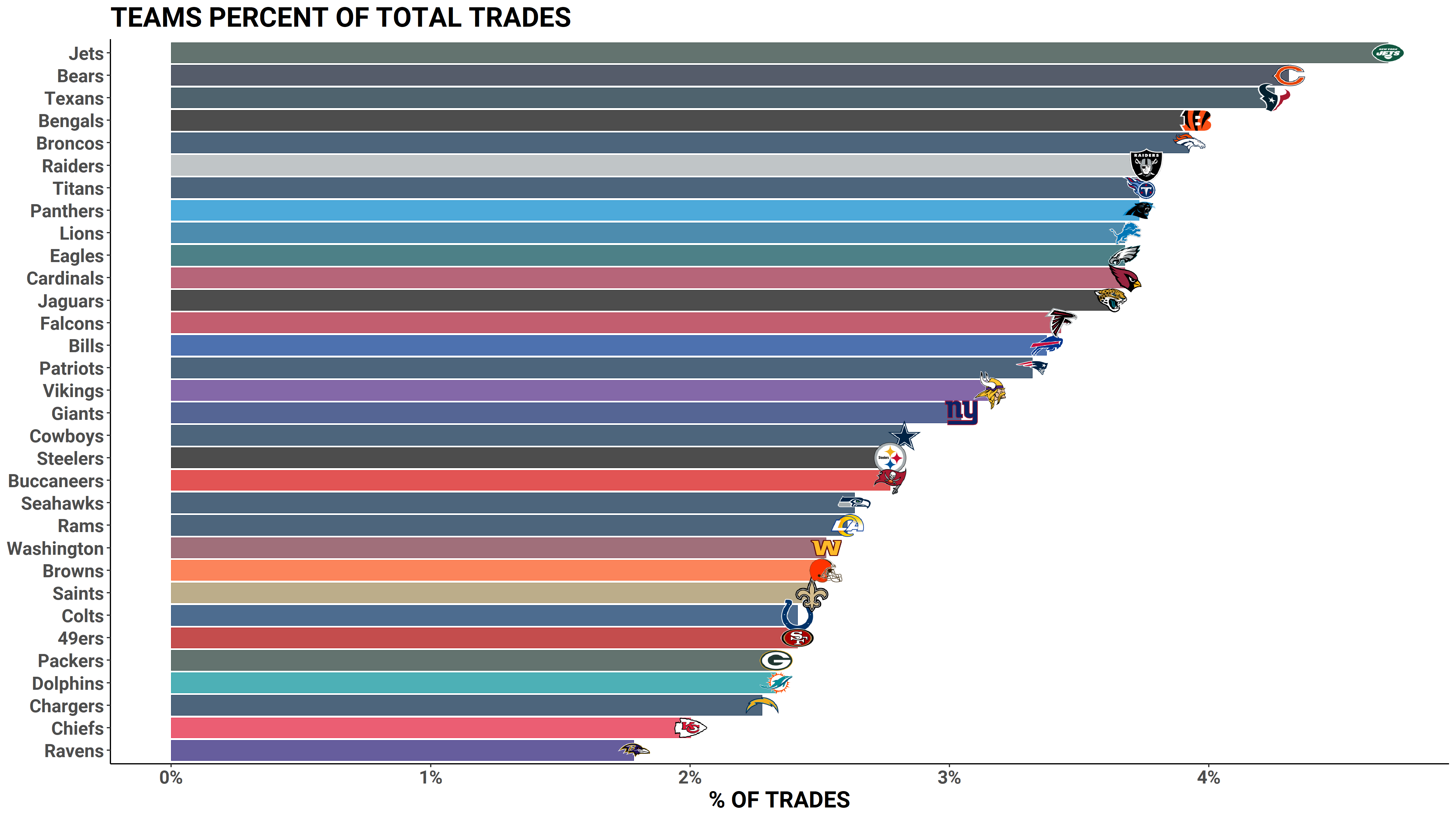 Two teams from the NFC North jump out at the top and bottom of this graph, which makes it the perfect division to dive into today.

Chicago has been the second-most traded team since March, accounting for 4.3% of all trades. Their impressive draft has caused many to buy in, as they have gained almost 5% in breakeven probability to win the NFC North since March. The clear reason for the hype is Justin Fields. PFF’s Tej Seth showed how Fields was the most accurate college quarterback during the PFF era.

The market for Fields’ to start wasn’t overly optimistic on his chances, and Matt Nagy squashed any potential rumors by stating Andy Dalton was the starting quarterback heading into Week 1. Chicago will receive tons of interest once it finally makes the move to Fields, but until that is announced, the expectation is that the Bears hold close to the 24th-priced team on SimBull. They have had the sixth-worst ROI over the past month with market participants showing their displeasure at the starting quarterback situation. Once Fields takes over, expect buyers to step in — that makes it the perfect market to try and front run on SimBull.

Detroit is priced as the fourth-cheapest team on SimBull despite having the second-shortest odds to finish with the worst record in the NFL. This appears to be the year where they could fully bottom out the expectation that they move closer to the basement-dwelling Texans than any other outcome. As a long-term play, the Lions make some sense, but with a further price drop expected, they appear to be a team to wait on.

Green Bay has been an untouchable team all offseason with pending news about Aaron Rodgers seemingly on the verge of breaking every day. As the standstill drags on, it becomes more obvious by the day that Rodgers should find himself in Green Bay for at least one more season.

The Packers are Super Bowl contenders with Rodgers on board. Even without Rodgers, there are still reasons for optimism, especially with them priced as just the 18th-most expensive team on SimBull.

Regardless of the outcome of the Rodgers saga, Green Bay is a team that can be bought at its floor. This makes for the perfect investment opportunity with a short-term swing trade capable of becoming a top-five-priced team.

The Vikings appear to be held together by duct tape at this point. Kirk Cousins‘ contract isn’t doing them any favors and hasn’t exactly elevated them to championship contention. They once again live in this state of purgatory with a talented roster at certain positions but a quarterback unable to consistently elevate the play of those around him. The contract also forces them to make tough decisions at less critical positions, which has left their defense and offensive line picked over.

Their standing as the 19th-highest priced team on SimBull is fitting given the state of their entire organization. It’s tough to see them competing for a Super Bowl in their current state, but options seem thin outside of a complete teardown and rebuild.

If this is the most likely path, then the Vikings appear untouchable at their current price with plenty of downside movement occurring in a rebuild. Their ceiling outcomes don’t justify a buy, either, as it's tough to see them coming close to a conference championship game. Given the current state of the market, there are plenty of other buying opportunities to be able to avoid the Vikings at this time.