• Bet Vikings TE T.J. Hockenson u33.5 receiving yards: We can look at Irv Smith’s performance when healthy to give us a good idea of Hockenson’s likely production (o33.5 yards in 2/7 games this year).

• Commanders ‘D' better of late: No opposing TE1 has eclipsed 34 receiving yards, including Hockenson in Week 2 (26).

• Bet Patriots RB Rhamondre Stevenson o23.5 receiving yards: In the 2 games since Mac Jones’ return, Stevenson has a combined 15 receptions, and 131 yards, which is way higher than his numbers early in the season.

• Seattle defense has played well in recent weeks but remains weak over the middle: Top LBs Jordyn Brooks and Cody Barton have a negative successful coverage over expected, and a very high EPA/target allowed.

• The market might be overreacting to DeAndre Hopkins return: Ertz has only seen 9 targets since Hopkins has come back, and has only combined for 55 yards in 2 weeks. But Ertz also faced the New Orleans Saints and Minnesota Vikings, two teams who are above average at limiting production to tight ends.

• Ertz had 70 yards in the most recent matchup: And nothing has really changed about the Seahawks defense, as they now have given up the most yards vs tight ends of all teams this year, and have allowed guys like Tanner Hudson (58 yards) and Gerald Everett (63 yards) to go over their prop number.

• The T.J. Hockenson trade is great in the long-term: But there might be an acclimation period to the Vikings offense. Hockenson at best is the third option in this passing offense, and we can look at Irv Smith’s performance when healthy to give us a good idea of Hockenson’s likely production (gone ovre 33.5 yards in 2/7 games this year).

• The Lions' pass defense has been historically bad this year: Ranking last in EPA/pass allowed, and passing success rate allowed. They have allowed 19 completions of 20+ yards to wide receivers this year, which is the 8th-most in the NFL.

• Romeo Doubs is Aaron Rodgers' best deep threat, with a 20+ yard catch in 5-of-8 games: Allen Lazard and Christian Watson are both questionable as well, so if either miss this game, Doubs will likely see an increase in targets, hopefully which will help to cash the over. 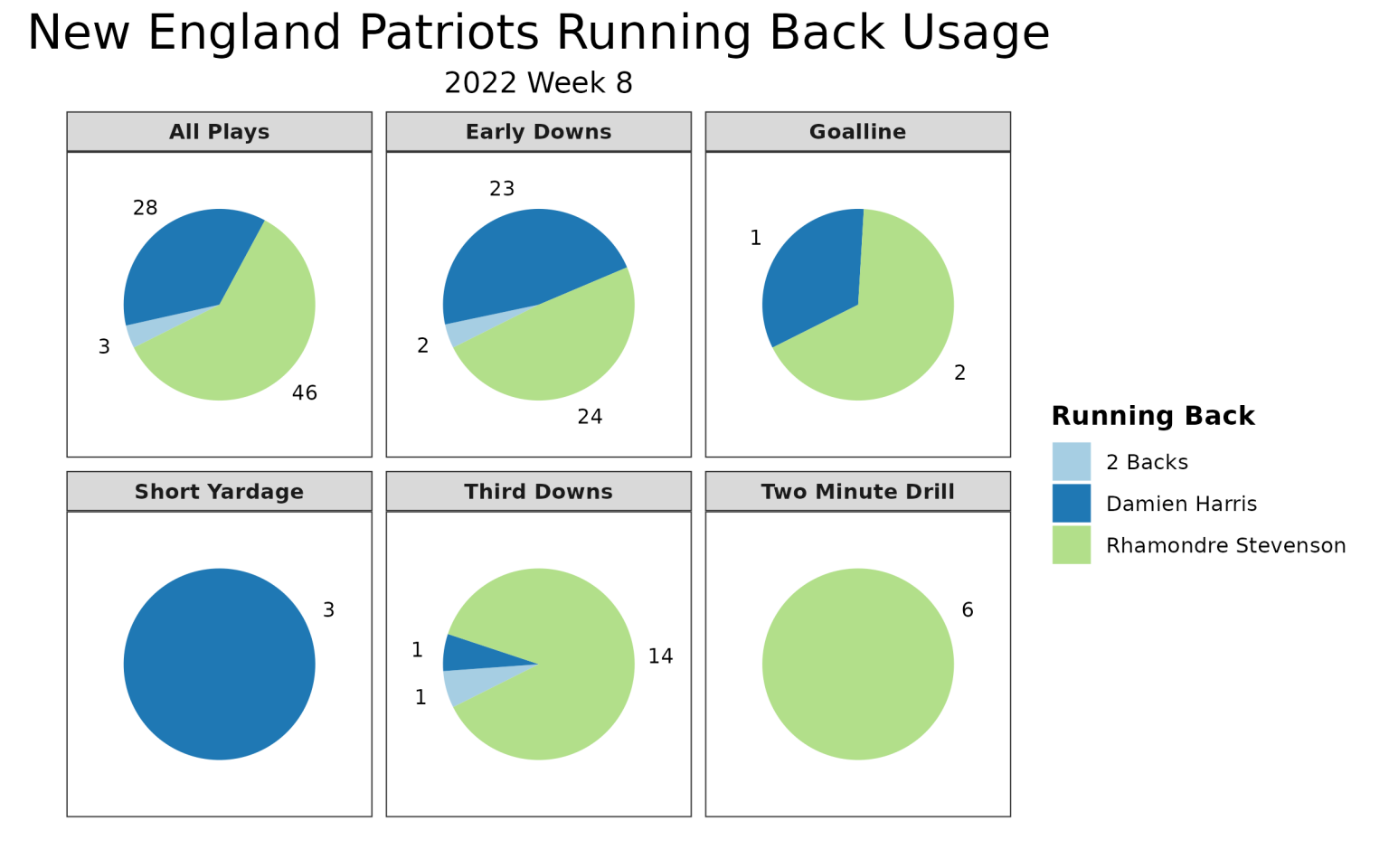 • Stevenson is the preferred back in late-down situations: With 14 snaps to Damien Harris’ 1 snap in Week 8 (illustrated above in our Nathan Jahnke's chart). Mac Jones has not looked like his 2021 self since coming back from injury, which has led to him bailing out of his progressions early and scrambling or checking down to Stevenson more this year.

• In the 2 games since Mac Jones' return: Stevenson has a combined 15 receptions, and 131 yards, which is way higher than his numbers early in the season.