• Bet Cowboys RB Tony Pollard o79.5 rush yards vs Bears: The NFL's most explosive back with at least 200 carries since the start of 2021 (10+ yards on 7.4% of carries), Pollard should be the Cowboys' featured back with Zeke hurt.

In the past five weeks, our rushing yardage prop bets based on rushing yards over expected (RYOE) are 11-4 (+5.9 units). This is because 10 of the 15 bets have been unders. As PFF’s Ben Brown shows, rushing yard unders cash more regularly than rushing yard overs. In this article, 2 unders and 1 over will be given out to maximize profits but the over should be placed with more caution than the unders. 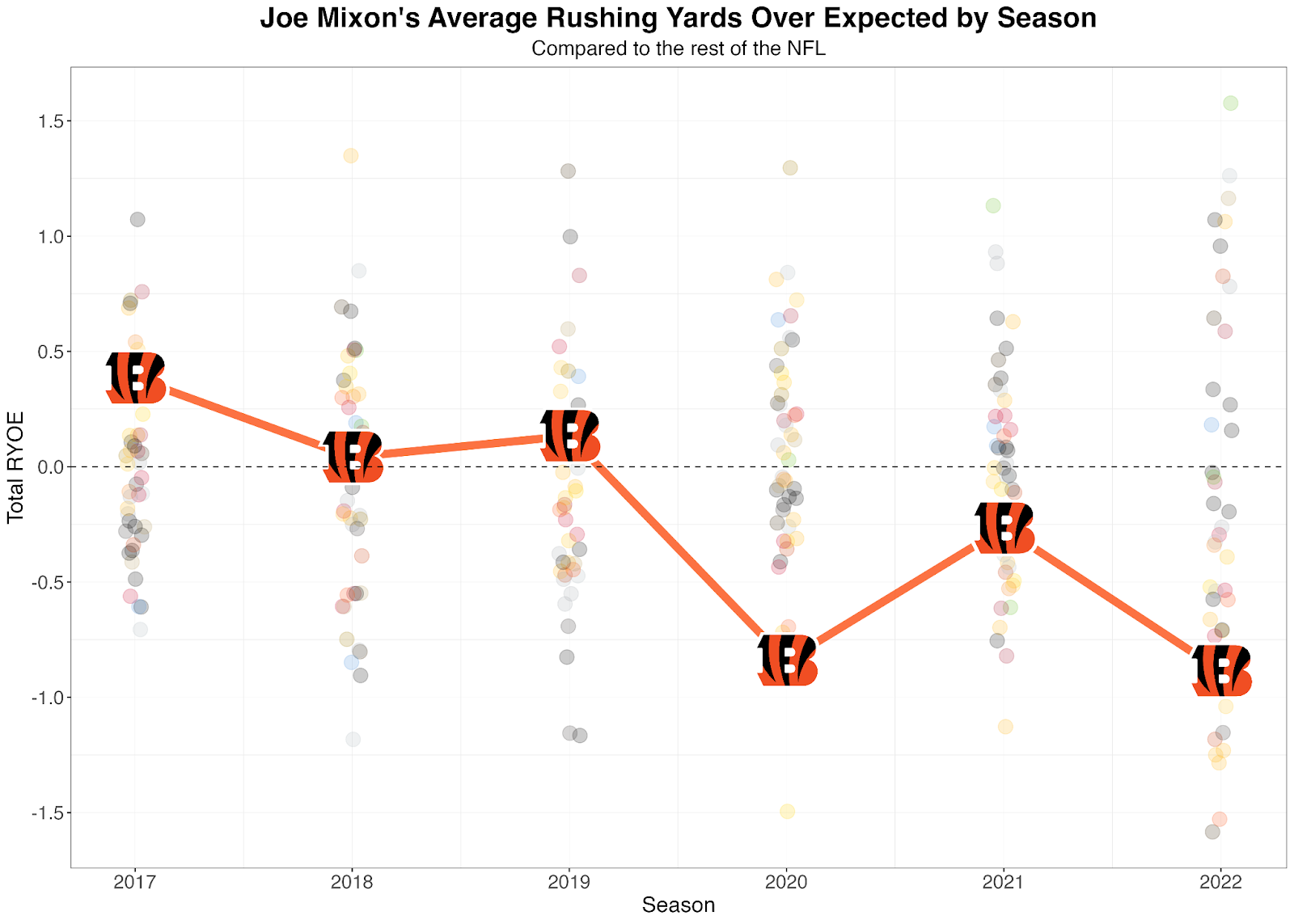 • Joe Mixon’s Rushing Has Declined: After being an above-average rusher his first three seasons in the NFL, Mixon has become a below-average rusher. This season, he is averaging 3.3 yards per carry and a -0.9 rushing yards over expected, which is 28th out of 33 qualifying rushers.

• The Bengals are Passing More Often Now: After passing on 60% of early downs in game neutral situations the first five weeks of the season, Cincinnati is passing on 79% of such plays the past two weeks. The Bengals have gone from a +0.2% pass rate over expected to a +24.2% on early downs. This means Mixon’s rushing hasn’t been that effective — and he also probably won’t get much opportunity. 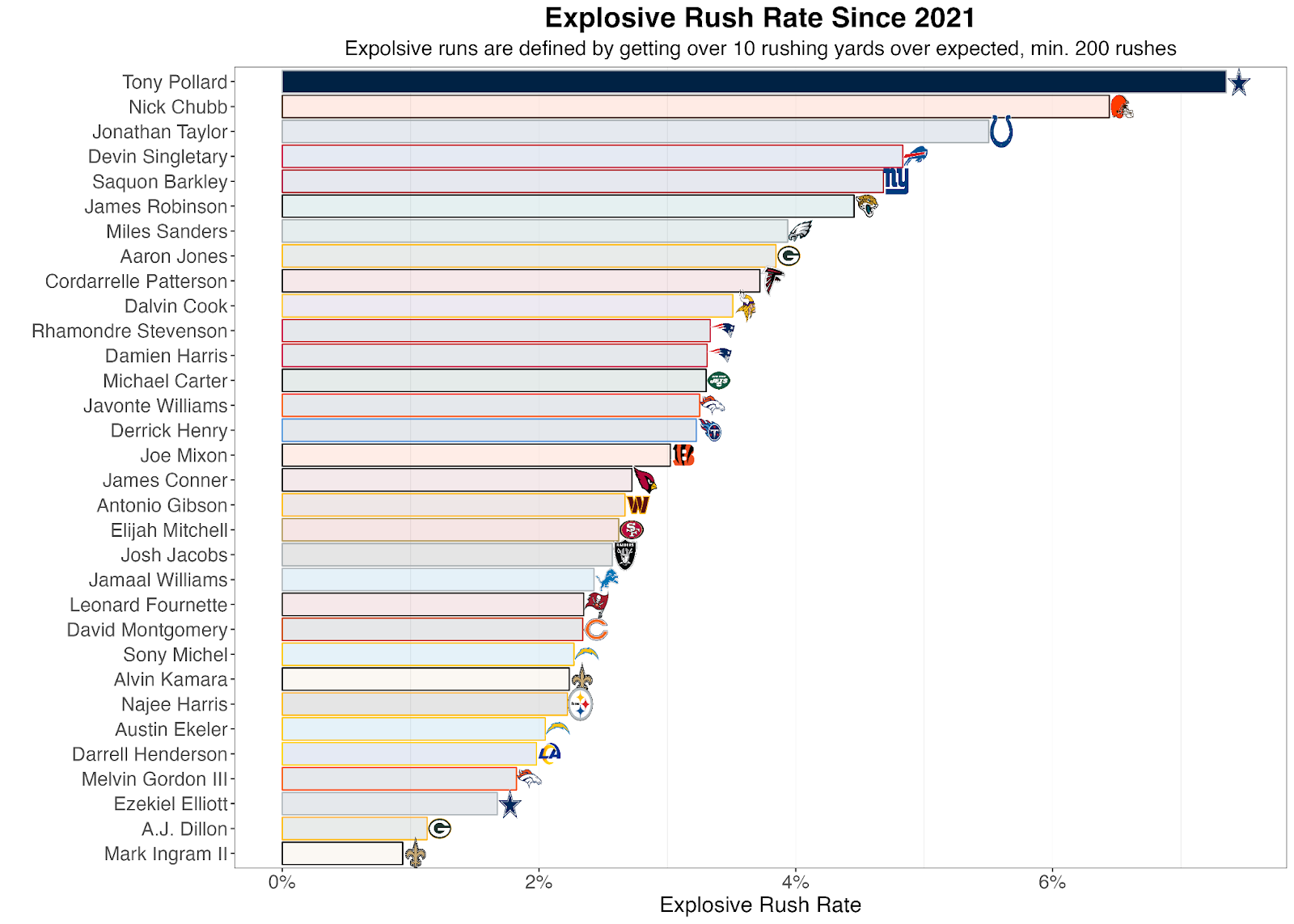 • Tony Pollard is Very Explosive: Among running backs with at least 200 carries since 2021, Pollard has had the highest explosive run rate (rushes that get over 10 rushing yards over expected) at 7.4% of the time. An explosive rush is the easiest way for a rushing prop to hit the over as all it takes is one run over 50-60 yards and the over will hit the majority of the time.

• Ezekiel Elliott is Banged Up: Pollard’s carries are often taken away by his counterpart Ezekiel Elliott, who'll reportedly be sidelined this week, so we can expect Pollard to get a higher workload. He gets an advantageous situation going up against a Bears defense that allows 4.8 yards per carry. 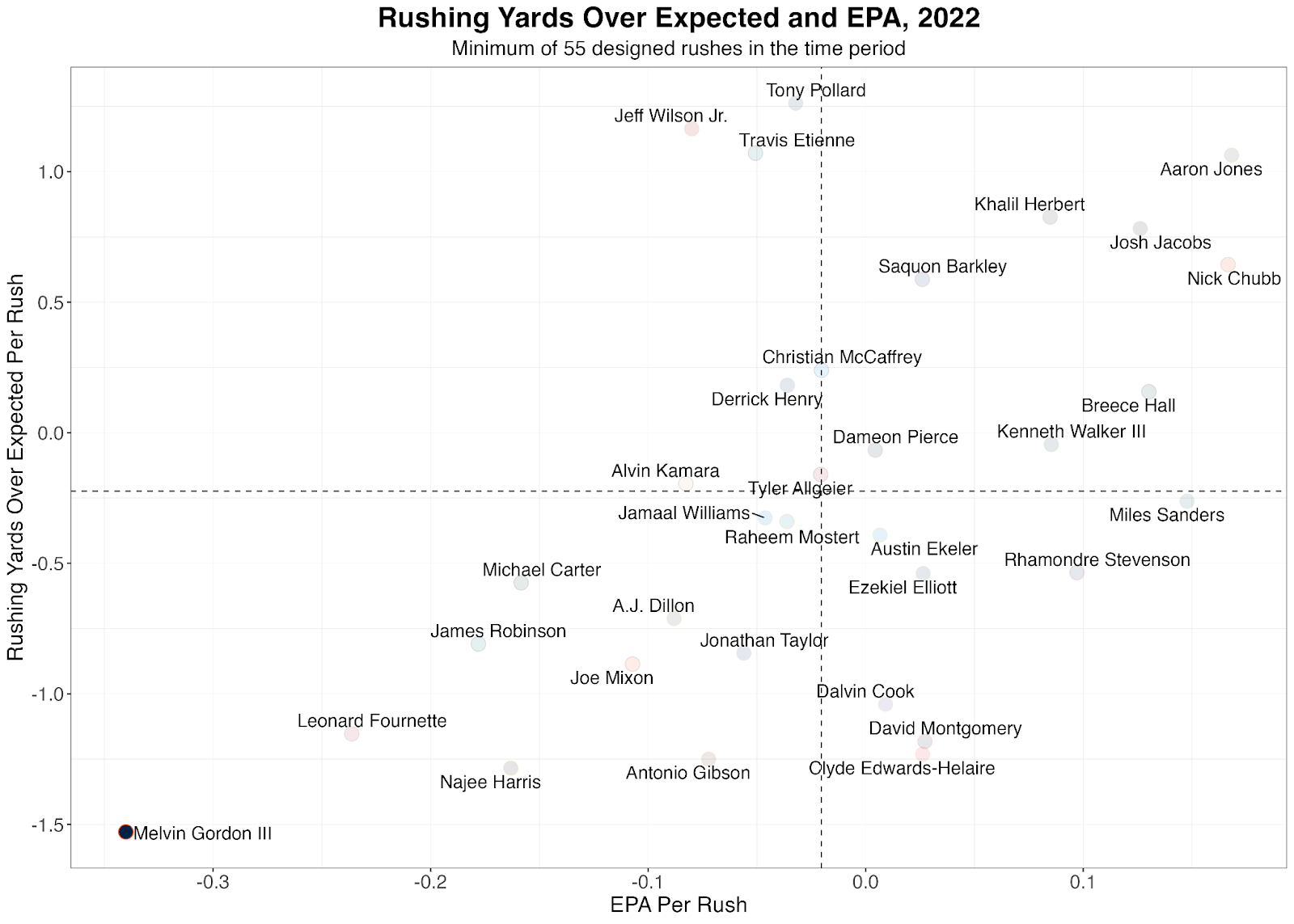 • Gordon Might be The Worst Rusher This Season: When looking at expected points added (EPA) per rush and rushing yards over expected per rush, Melvin Gordon ranks dead-last in both metrics used to evaluate running backs. The past four weeks, Gordon has handled 3, 13, 4 and 11 carries, respectively, which shows the Broncos are phasing him out of the run game.

• Jacksonville Has a Good Rush Defense: The Jaguars have only allowed 4.1 yards per carry, which ranks 5th in the NFL. This Sunday’s game could be a bad matchup for a struggling Broncos offense against a Jaguars defense that has played well for stretches.