• Tua Tagovailoa is having a truly remarkable season — elite in all of the stable metrics, and succeeding regardless of what defenses try to stop him.

• The Dolphins' implied point total is at a mere 21 despite scoring 30+ in each of their past 4 games.

If the Dolphins offense continues at their torrid pace, this eliminates the comparative advantage the Niners have over Miami. In a shootout game scenario — if the Niners can keep up — I'm siding with the better offense and better quarterback, especially at such juicy odds. 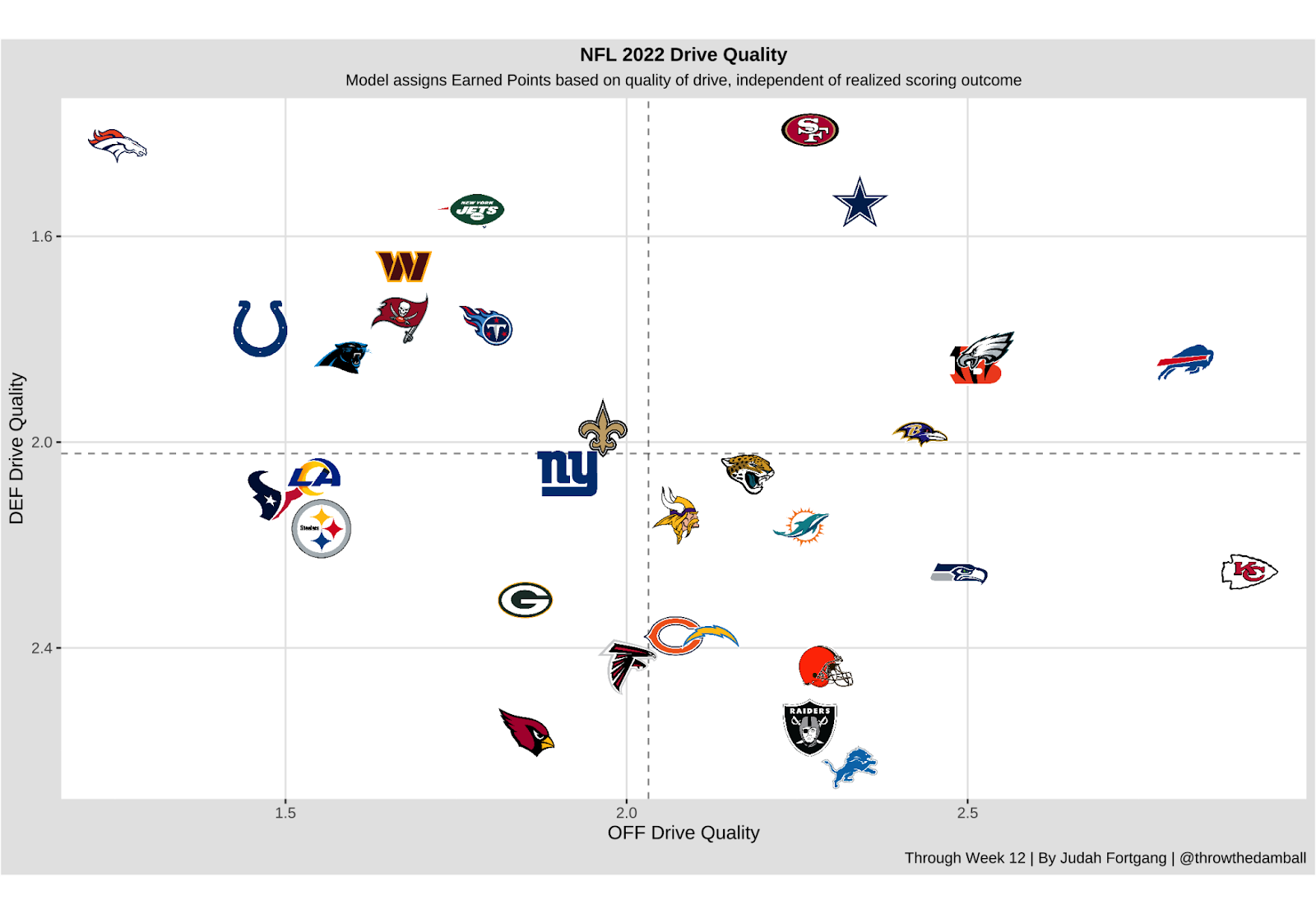 Drive Quality, which quantifies how well each team moves the ball, suggests the Dolphins and Niners are about even on offense, while there is a clear edge to the Niners on the defensive side of the ball. 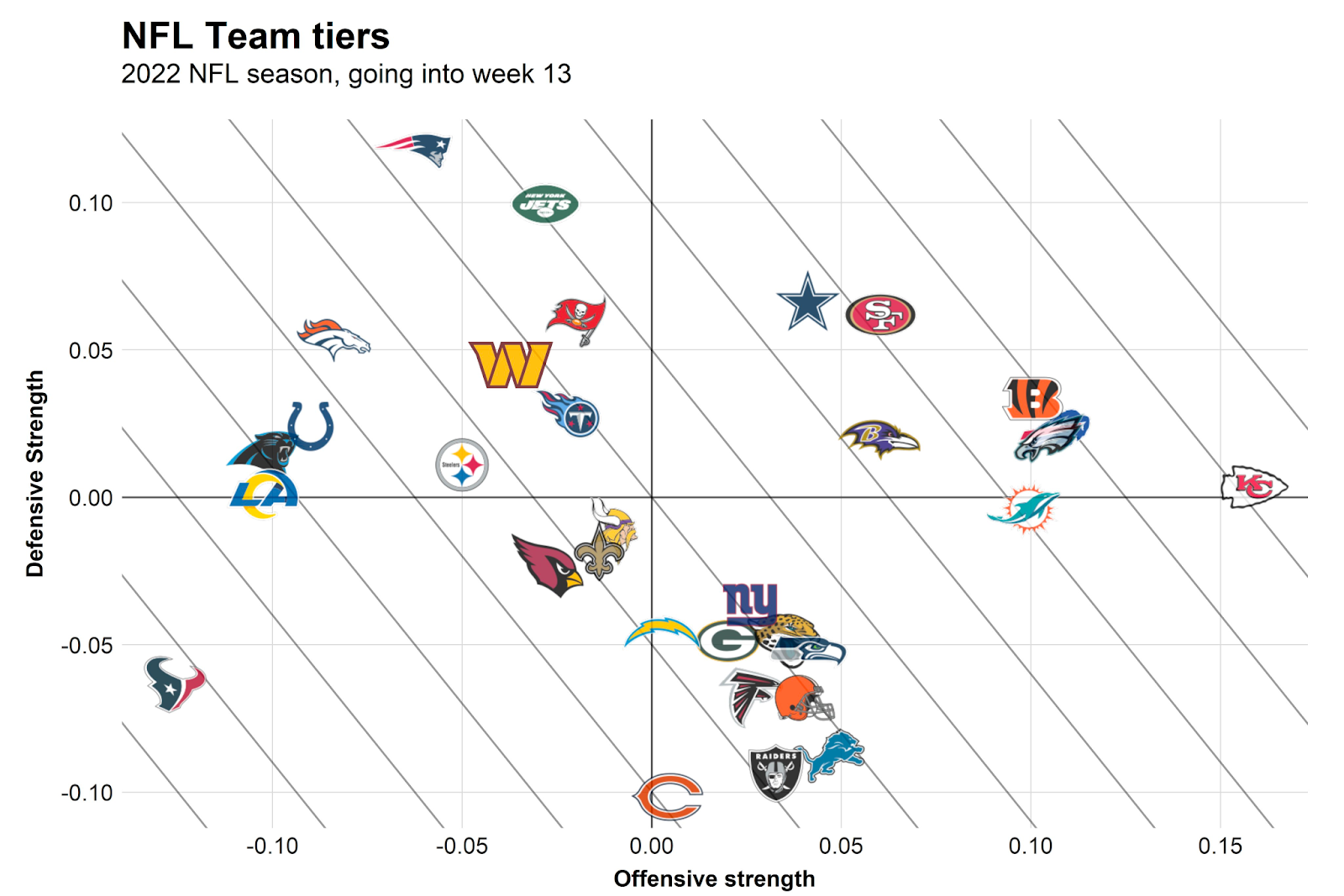 Adjusting for matchup, as PFF’s Timo Riske does here, the Dolphins have a slight edge on the offensive side, and the Niners retain their slight edge defensively.

But further bolstering the case from a fundamentals perspective, baked into the Dolphins production metrics are a few games from Teddy Bridgewater and Skylar Thompson.

In games with a healthy Tua, the Dolphins are neck-and-neck with the Chiefs for the best offense in the NFL by efficiency — whether looking at Drive Quality, EPA, or any other metric.

So from a fundamental perspective, the teams, we think, should be roughly priced even, as the Dolphins have the better offense while the Niners the better defense.

But what gives in this spot that the Dolphins are the team to bet?

Nobody can stop Tua and Dolphins offense

The Dolphins' implied point total is at a mere 21 despite scoring 30+ in each of their past 4 games.

We shouldn't downgrade an elite offense because of a matchup against a good defense. Elite — and I don’t use this world loosely — offenses will beat good defenses generally, and we have even better reason to think the Dolphins can beat the Niners D’.

Tua is having a truly remarkable season — elite in all of the stable metrics. And while that obviously is important to note, the key in this matchup is that no matter what defenses throw at Tua, he has succeeded. 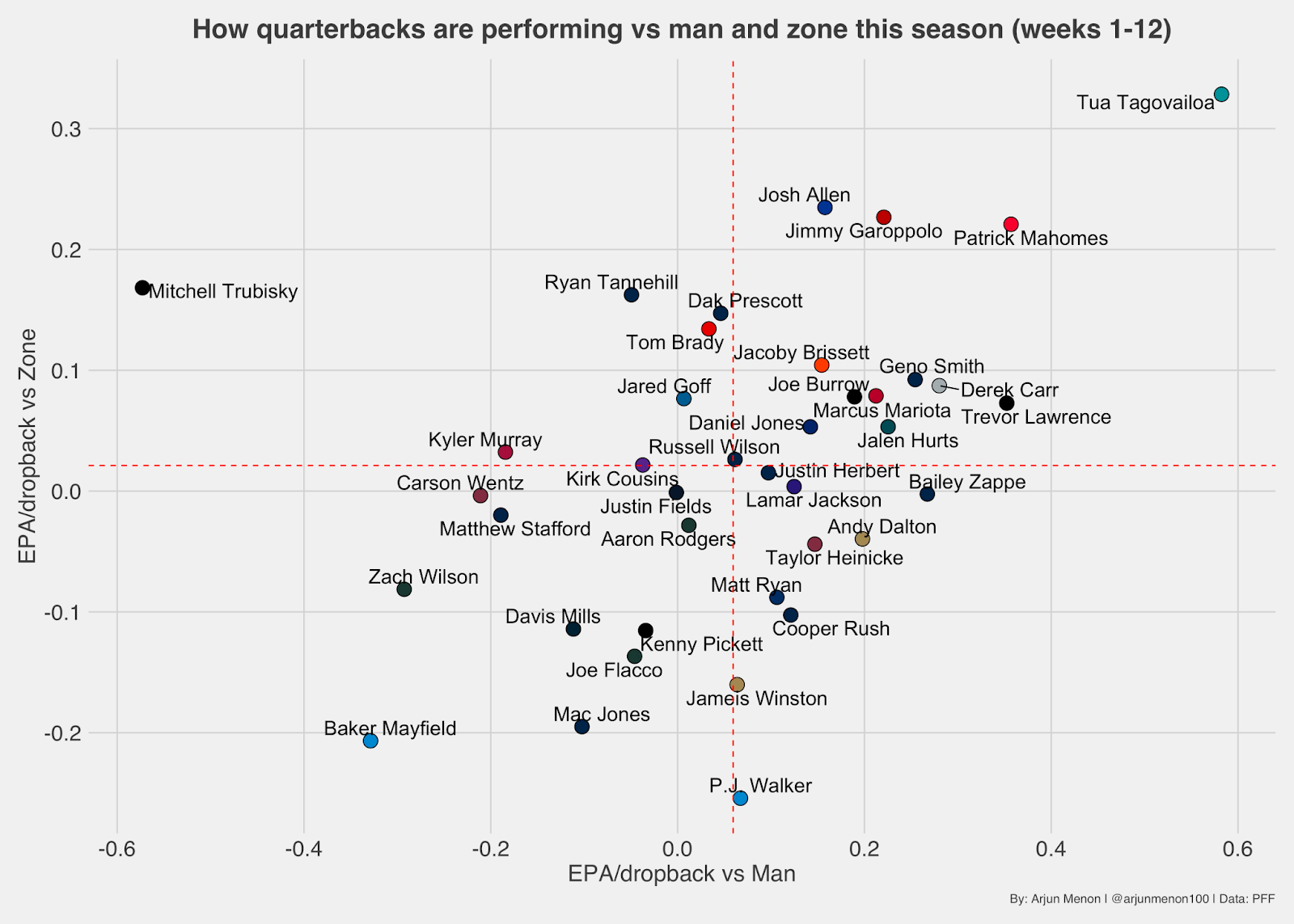 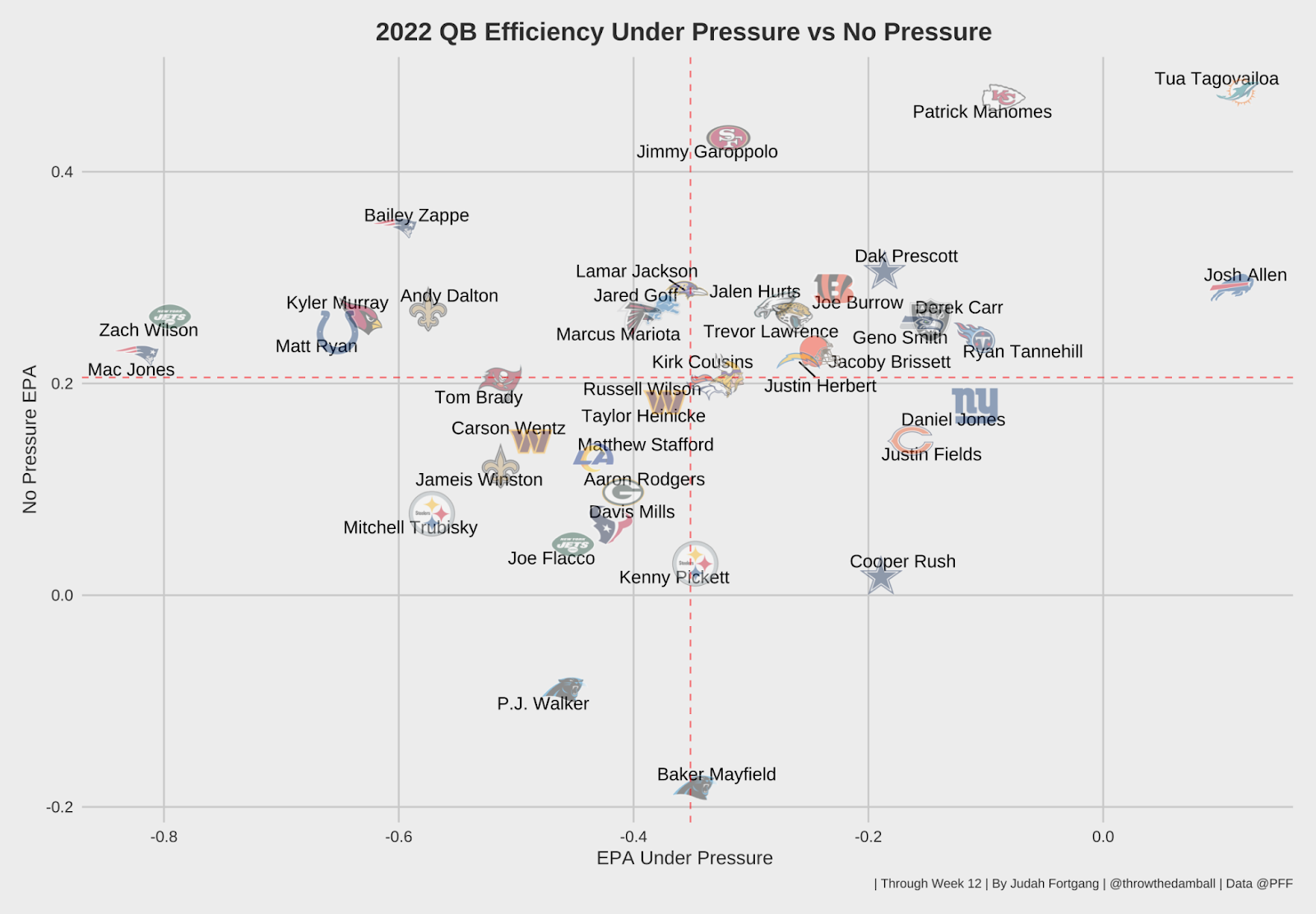 Whether Tua is pressured or not, he’s still leading the league in EPA in both categories. 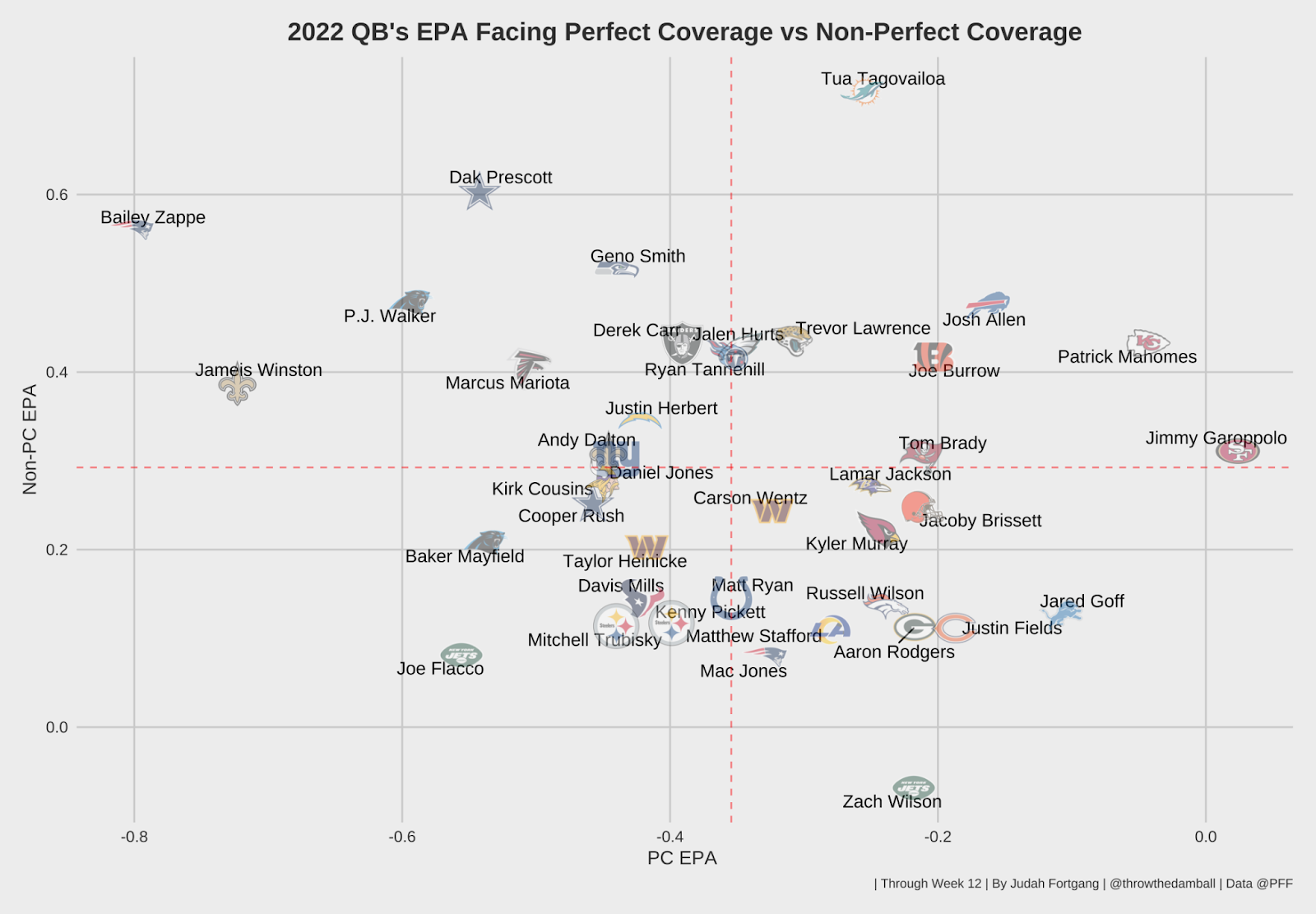 And just in case you needed one more data point to back it up: Facing perfect coverage or not, Tua is still upper-right echelon of quarterbacks.

Now it is worth noting that Jimmy Garoppolo and the Niners also appear highly on these charts — albeit not in the same spot as Tua and the Dolphins. I think this suggests the Niners also will have no issue moving the ball and this game will likely turn into a shootout.

In a game script that features two top offenses in a possible shootout, I like siding with the better offense and better QB — especially at +400 odds.