· Game of the Year, The Anatomy of a Bad Beat: Minnesota Vikings 33 – Buffalo Bills 30

· It was the game of the year so far … so long as you didn’t have money on the Bills.

The term bad beat is used in sports betting when a bet is lost because of misfortune. There are degrees of luck inherent to every wager, but bad beats are reserved for the most extreme of circumstances. It is not uncommon to lose a bet despite feeling as if you were on the correct side, and it seeming as if your wager was assured to cash — i.e. a bad beat.

The Bills-Vikings game in Week 10 was unique in the sense that the spread was in a constant flux throughout the week. The status of Buffalo QB Josh Allen was a constant unknown, and information regarding his availability leading up to kickoff was heavily influential to the line movement. The line varied from Buffalo -9 briefly on Nov. 6, to Buffalo -3 on Nov. 11. The game’s spread ultimately settled with the Bills as a 6.5-point favorite, but the most common line throughout the week was Buffalo -3.5. 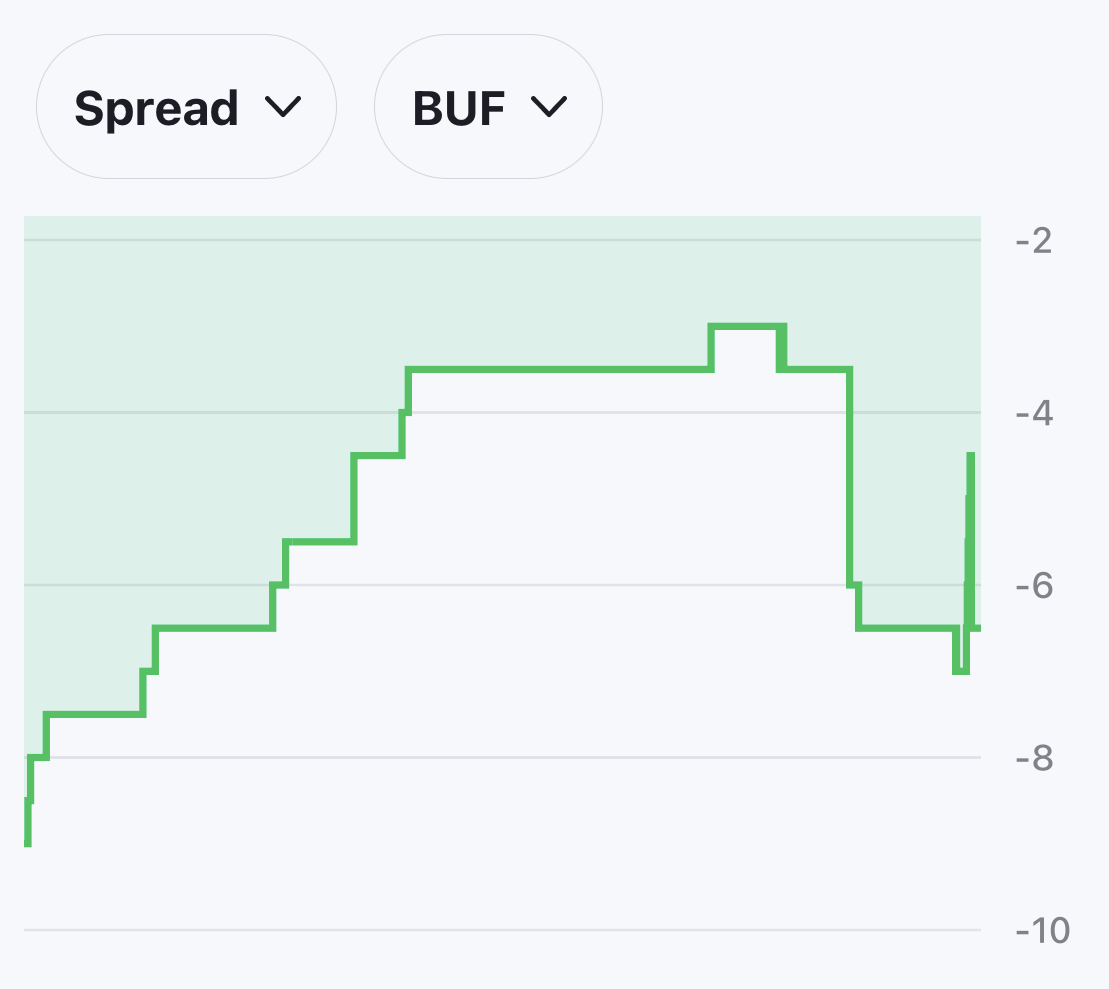 Graphical representation of the line movement provided by actionnetwork.com

It is possible to estimate each team’s win probability given the game’s circumstances (score, down, distance, time remaining, etc.). Intuitively, win probability would be equal between opponents at the onset of the game, but it is not uncommon to adjust win probability to the game’s spread. Because the Bills entered as a 6.5 point favorite, their ‘Vegas Win Probability’ was roughly 71% at kickoff.

The following image represents the Bills’ in-game Vegas Win Probability, and the graph is made using nflfastR and their play-by-play data set. 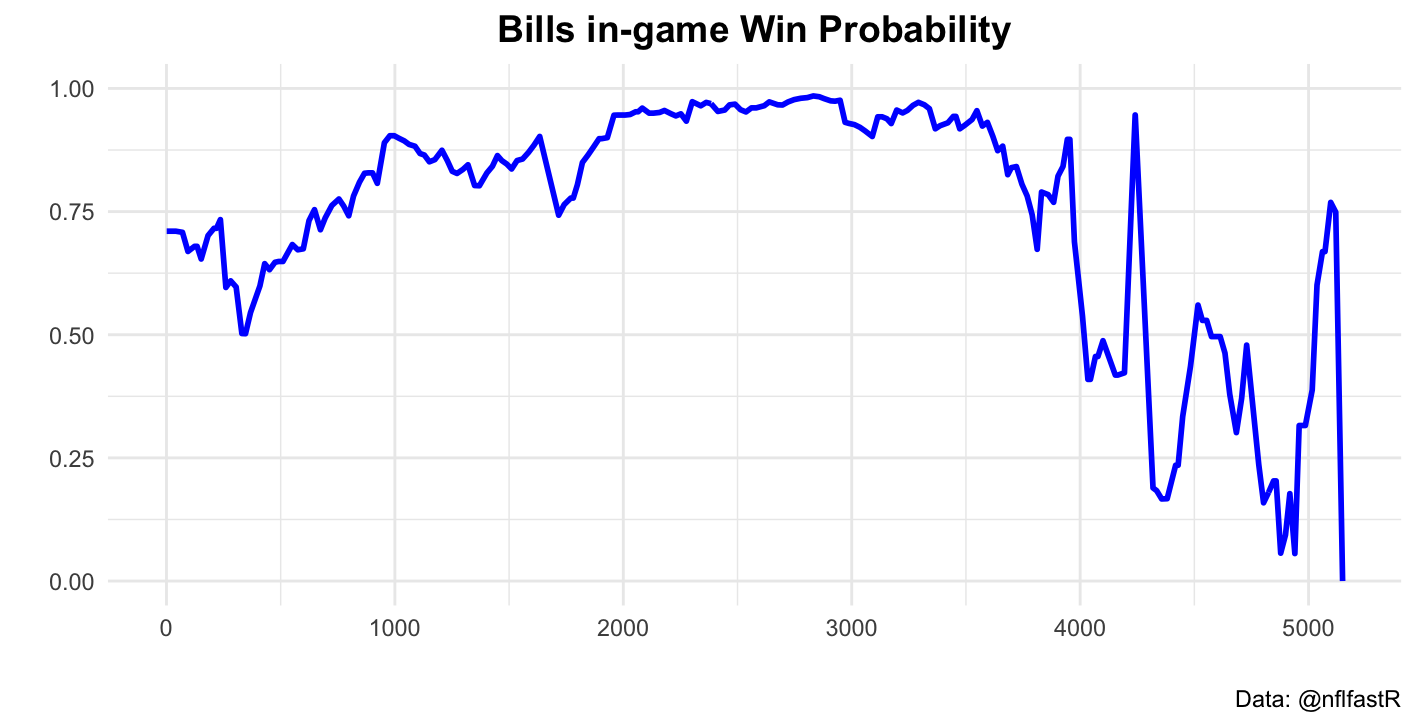 For more information regarding win probability, win probability added, and other commonly cited metrics in NFL handicapping, check out the link here.

· At this juncture of the game, the Bills had a win probability of roughly 97%, and those unfortunate enough to be holding Buffalo -3 tickets were surely comfortable the team would cover the spread. However, on first-and-10 from their own 19-yard line, Minnesota RB Dalvin Cook broke free for an 81-yard touchdown. The unlikely score resulted in an 8% swing in win probability.

· The play is even more surprising given the context of the game. The Bills’ run defense was previously rated sixth in the NFL per Football Outsiders’ DVOA, and had been otherwise stout on the day. This carry counted for two-thirds of Cook’s rushing yards on the day — and more than half of the Vikings' total yards on the ground.

· The Bills led by ten, facing a short fourth down on the Minnesota 7-yard line. Given the lead and the situation, the Bills' win probability was once again hovering near 95%. Buffalo elected to go for the end zone in an attempt to effectively end the game, and the play resulted in a Josh Allen interception. The interception accounted for -4.3 points of EPA, and capped off three consecutive negative EPA plays for the Bills in the red zone. Josh Allen’s errant throw and the ensuing return dropped the Bills win probability below 90%.

· In hindsight, it is easy to say the Bills should have taken the points, but their decision to go for it on fourth-and-short was not so egregious. See below the real-time analytics regarding the Bills’ fourth-down decision, via Ben Baldwin, with further explanation of his model to be found here.

· The Vikings converted a pair of fourth downs on a drive which would later result in a touchdown, and the respective conversions gave the Vikings 7.3 and 5.6 points of WPA. Had Buffalo stopped them on either attempt, their chances at a comeback would have been futile.

· Minnesota K Greg Joseph missed an extra point off the upright, and those who bet the Bills at -3 or -3.5 were feeling extremely fortunate. Further, the missed XP meant Buffalo still had an 80% to win the game, and the odds of the Bills covering a 6.5-point spread were roughly 70%, according to actionnetwork.com.

· A quick three-and-out afforded the Vikings an opportunity to steal the game with less than four minutes remaining, and at the two-minute warning, Minnesota faced a fourth-and-18 in its own territory. Ben Baldwin’s model declared this to be a toss-up between a punt and a conversion attempt, but a fourth-down try was inevitable for the Vikings.

· Minnesota WR Justin Jefferson’s incredible catch resulted in 15 points of WPA added for the Vikings, and this was the moment that the potential of a bad beat became a real possibility.

· After the Vikings advanced to the Buffalo 3-yard line, setting up first-and-goal with an opportunity to take the lead, the Bills’ WP dropped precipitously to 40%.

· The Bills stalled the Vikings, and Minnesota faced a fourth-and-goal at the one. The WP was essentially even for both teams. The ensuing stop by Buffalo’s defense gave the Bills a greater than 93% chance to win the game, according to nflfastR, in these circumstances.

· The exchange between C Mitch Morse and Allen was mishandled, and the Vikings recovered in the end zone for a touchdown to take the lead. Buffalo’s 17-point lead had vanished, leaving the Bills only an 18% chance to win the game outright. Allen and the Bills were fortunate to force overtime, but Buffalo -6.5 backers were essentially out of chances.

· The Vikings won the overtime coin-toss, but after a couple explosive runs by Cook and a 24-yard pitch-and-catch from Cousins to Jefferson put them on Buffalo's doorstep, a 10-yard sack split by Ed Oliver and Shaq Lawson stalled the drive, ending in a 33-yard Joseph field goal.

· Buffalo had an opportunity to win the game with a touchdown, but no remaining chance of covering the spread. Allen’s second red zone interception of the day capped off a miraculous Minnesota comeback, and scorned those of us so unfortunate to have bet the Bills as a 3.5-point favorite.

· This is the anatomy of a bad beat. Stunning fourth-down conversions and uncharacteristic Buffalo turnovers fueled Minnesota’s shocking victory. This was the game of the year so far, so long as you didn’t have money on the Bills.