• Bet Browns +6.5 at Ravens: Cleveland has slowed Baltimore run game before, and getting this many points in projected low-scoring game is a plus.

• Bet Falcons +6.5 at Bengals: Their defense is a concern, but Falcons have chance to run roughshod over Cincinnati similar to the way Saints did with Bengals missing D.J. Reader.

Each week, I pick my favorite underdogs that might perform better than the market expects. Last week, I went 3-2 against the spread and 2-3 on moneylines, putting the overall record at 6-4 ATS and 2-8 SU. My read on the Browns-Patriots game was a home run, and all other games were close as expected, with Cleveland covering the spread, and the Commanders winning outright.

For this week’s games, we will work with the following money lines and spreads as of Thursday morning. The column “win percentage” is the implied (vig-removed) win percentage deduced from the moneylines. 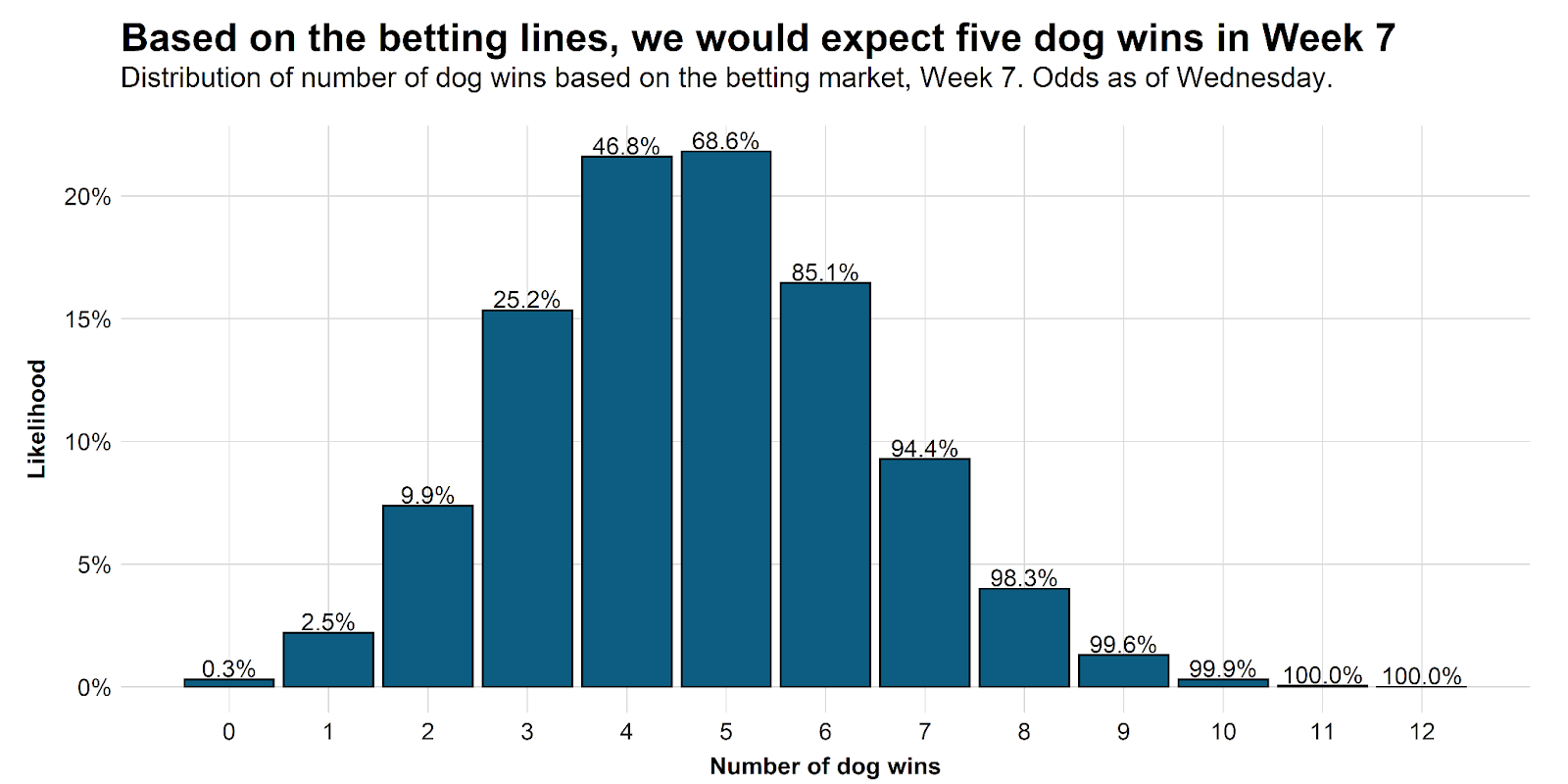 • After averaging only -0.16 EPA per play in the first three weeks, the Saints offense generated 0.04 EPA per play in the past three weeks: New Orleans has found its identity on offense while switching it up between Andy Dalton and Taysom Hill at quarterback.  The Cardinals are trending in the opposite direction and struggled to score against the Seattle Seahawks, one of the worst defenses in the NFL.

• The market has shifted toward the Cardinals given the Saints' myriad injuries: But the point to me is that they’ve already been injured all season and it hasn’t stopped them from gradually improving over the past four weeks. The Saints have a good chance to upset the Cardinals on Thursday Night.

• New Orleans ran all over a Bengals front missing D.J. Reader: Cincinnati lost Reader to injury, and the Saints ran for 228 yards. Enter Arthur Smith's Falcons, one of only seven teams who average positive expected points per play on rushing plays this season.

• Spotlight on A.J. Terrell–Ja'Marr Chase showdown: I’m definitely worried about the Falcons' defense in this game — and a lot will depend on whether Terrell can shut down Chase — but Atlanta is doing a good job of shortening games with its ball-control offense consisting of runs and high-percentage throws for Marcus Mariota. This is why I like the prospect of the Falcons keeping it close in this game.

• Fading the Browns was our best bet last week, but the game against the Ravens could be vastly different: Cleveland is still the best rushing team in the league — and a surprisingly good offense so far. The Ravens are not as equipped to stop the Browns as the Patriots were a week ago. On the other side of the ball, Baltimore obviously also likes to run it a ton, which could turn this into a fairly low-scoring game — even if both offenses are successful at what they want to do. One could argue that the Browns' run defense is bad enough for the Ravens to simply run over it, such as other teams have in recent weeks. However, the Ravens' run game is obviously different from others, and the Browns coaching staff came up with plans to stop it before.

• Getting 6.5 points in a low-scoring game is always good: Hence, I especially like the Browns against the spread here. With the best edge rusher in the league on their side, they could even complete the upset if they can keep it a close game until late in the fourth quarter.

• With the Titans ranked 30th in adjusted pass-block grade: Sunday marks a huge chance for the Colts’ pass rush to finally step up. Poor Pass protection is a large reason why Tennessee's offense has struggled so far, also ranking 30th in net yards per play.

• The Colts' offense adjusted last week after early-season struggles, moving the ball well with a quick-passing game against the Jacksonville Jaguars: This could neutralize the fact that the Titans' pass rush with Jeffery Simmons should also be a mismatch against Indianapolis' offensive line.

• The Bucs offense ranks 20th in EPA per play, 12th in success rate, 15th in first down percentage and 23rd in net yards per play: Most importantly, they rank dead-last in rushing EPA per play, and yet they are determined to run the football, without even using a lot of play action. Yes, the Bucs are the better and more talented team, but their offensive issues go beyond the red zone issues at this point — and they aren’t just a fluke. That makes the angle in this game fairly easy: There is a good chance the Panthers can keep things closer than three scores by holding the Bucs to field goals. This not a moneyline bet I’d recommend unless you're determined to take a longshot, but I like the Panthers against the spread here.