It is the perfect time of year for college football fans, with 59 Week 10 games packed over four straight days.

Betting opportunities exist every day of the week. Twenty-one of our top-25 teams are set to play this weekend, with one matchup between teams in our top five and another between two teams in our top 10. Both the quality and quantity of games in Week 10 are unmatched so far this season.

Week 10 has brought about a significant increase in uncertainty compared to the previous two weeks. This is the third-most uncertainty we have had in a week this year, as it sits just below the third quartile of uncertainty dating back to all weeks since 2014. There are a few large spreads, which help to reduce the difficulty in picking winning teams. Historically, Week 10 has seen a slight increase in uncertainty, with the quality of matchups improving as we head towards the end of the conference schedule. The addition of the Pac-12 only heightens this level in 2020.

Our initial lines picked up some closing line value last week, but written plays still finished 2-2. Derivative bets were hot once again, going 4-1 to move to 16-5-1 on the season. These plays are discussed heavily on the Saturday morning edition of the PFF Daily Betting Podcast.

We now sit at 57-58-1 on written full game plays over the past two college football seasons. PFF's predictive model (NCAA Greenline) had another positive week at 4.4 units against the closing line as it continues to identify significant value on each college football slate. Let’s take a close look at some of my favorite bets to make from a Greenline perspective for this Week 10 slate of games.

Our Elo rankings have these teams much closer than the current spread would indicate, with the Aggies having the better offense but the Gamecocks holding the advantage on defense. The cash percentage leans toward the home dog, with the majority of tickets on the Aggies. This is counter to the line movement, which opened at +8 before pushing out to +10.

Kellen Mond is the superior quarterback in this matchup and has the second-best PFF grade on throws from a clean pocket. On the other sideline, Collin Hill is coming off the highest-graded game of his 2020 season but has the fifth-lowest average depth of target (aDot) in the SEC. And while the South Carolina quarterback does boast the third-lowest percentage of negatively graded throws in the FBS, he offers little upside because of his aversion to risk.

This is the perfect setup for a large dog, at home, late in the season. Hill isn’t going to hand the Aggies the game, so if South Carolina can slow down the Aggies offense, this matchup should stay close throughout.

Jonathan Smith is entering his third year as coach of the Beavers but is breaking in a new quarterback after losing Jake Luton to the NFL. Tristan Gebbia played mop-up minutes in 2019 outside of the one start against Oregon, where he struggled to a 56.0 PFF passing grade. This was hindered by four turnover-worthy plays, despite none resulting in interceptions.

Numerous things are working against this game reaching its high game total. Both teams have new quarterbacks, who appear to be a significant step back from what each team had in place last season. Given everything working against these offenses, one of the best bets on the board is the under, which targets this game being slower-paced than the market currently projects.

Appalachian State has found its mid-season form after a humbling loss to Marshall in the second game of the season. We now know that Marshall is much better than we projected heading into that game, so the adjustment down for Appalachian State was overstated. They are still the second-best team in the Sun Belt; Texas State is the second-worst team.

The spread has moved a half-point in the favorites' direction behind 66% of the cash and 87% of the tickets. This looks like a smash spot for the Mountaineers, who have the best opponent-adjusted offensive and defensive ranking in the Sun Belt.

Both rushing units have generated a neutral expected points added (EPA) per rush attempt figure, but there is a clear distinction between these two teams when it comes to EPA per pass attempt. Appalachian State has the third-best mark in the Sun Belt Conference, while Texas State comes in at second-worst in the same metric. 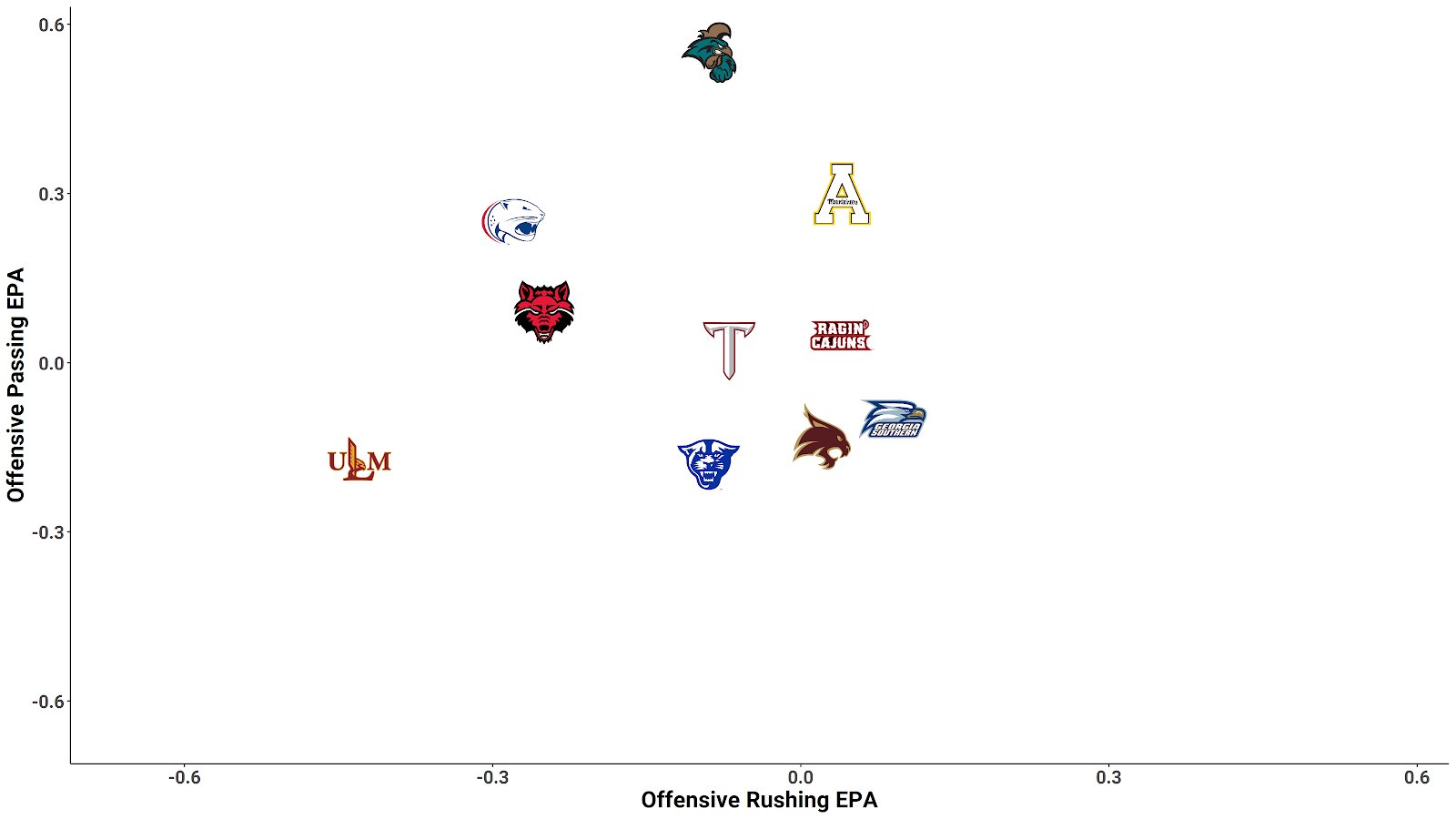 Zac Thomas hasn’t performed as well as expected in 2020, posting the eighth-best PFF passing grade in the conference (70.3), though he might not be asked to do that much because Brady McBride‘s 42.5 passing grade rings in at dead last. McBride's 6.9% turnover worthy play rate leads the conference, and the Mountaineers can capitalize on every mistake he makes.

McBride would have to play a flawless game for the Bobcats to cover this spread, but what he has shown so far in 2020 doesn’t make this a likely proposition. One turnover could quickly turn this into a rout, with the Mountaineers more than capable of turning this into a blowout with their offense or defensive units.