Week 8 of the NFL season is upon us, so it's time to investigate the week's slate and identify the best NFL betting opportunities for the weekend. But first, let's look at the leverage at stake in Week 8 and check back in to see how home-field advantage and totals are looking now that we’re approaching the halfway mark of the season. Then we can dig deep into the PFF data to identify a couple of Week 8 picks that I’m excited about!

The leverage charts below show how important a team’s Week 8 game is to their postseason hopes. The number to the left of a team shows their chances if they lose in Week 8, while the number on the right shows their chances if they win. These numbers are based on thousands of simulations for the remainder of the season. Teams with only one number shown have a Week 8 bye. 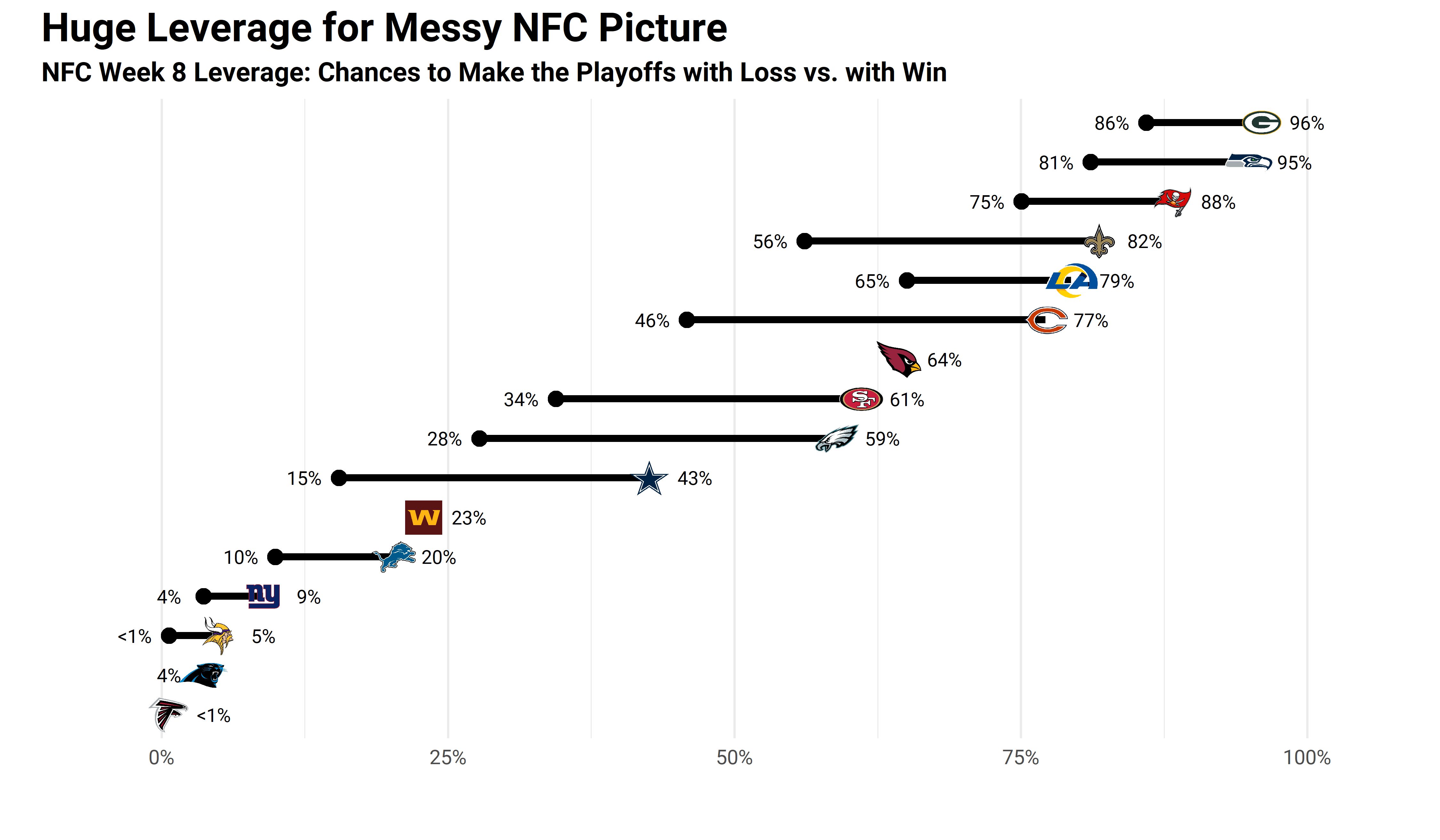 When the Las Vegas Raiders and the Cleveland Browns face off this week, the Raiders will be trying to jump back into a wildcard position, whereas the Browns will be trying to make sure they don’t fall out of one. The Indianapolis Colts could either fall in or out depending on how they fare when they take on the Detroit Lions this week. The AFC East battle between the New England Patriots and Buffalo Bills has a lot on the line for both teams' playoff chances, as well.

No game this week has more playoff leverage than the matchup between the Chicago Bears and the New Orleans Saints. Meanwhile, the San Francisco 49ers will be aiming to jump back into the playoff race with a win against the Seattle Seahawks, who are trying to keep pace with the Green Bay Packers in the race to the No. 1 seed and the bye that comes with it.

Now we’ll look at the same charts for winning the division. 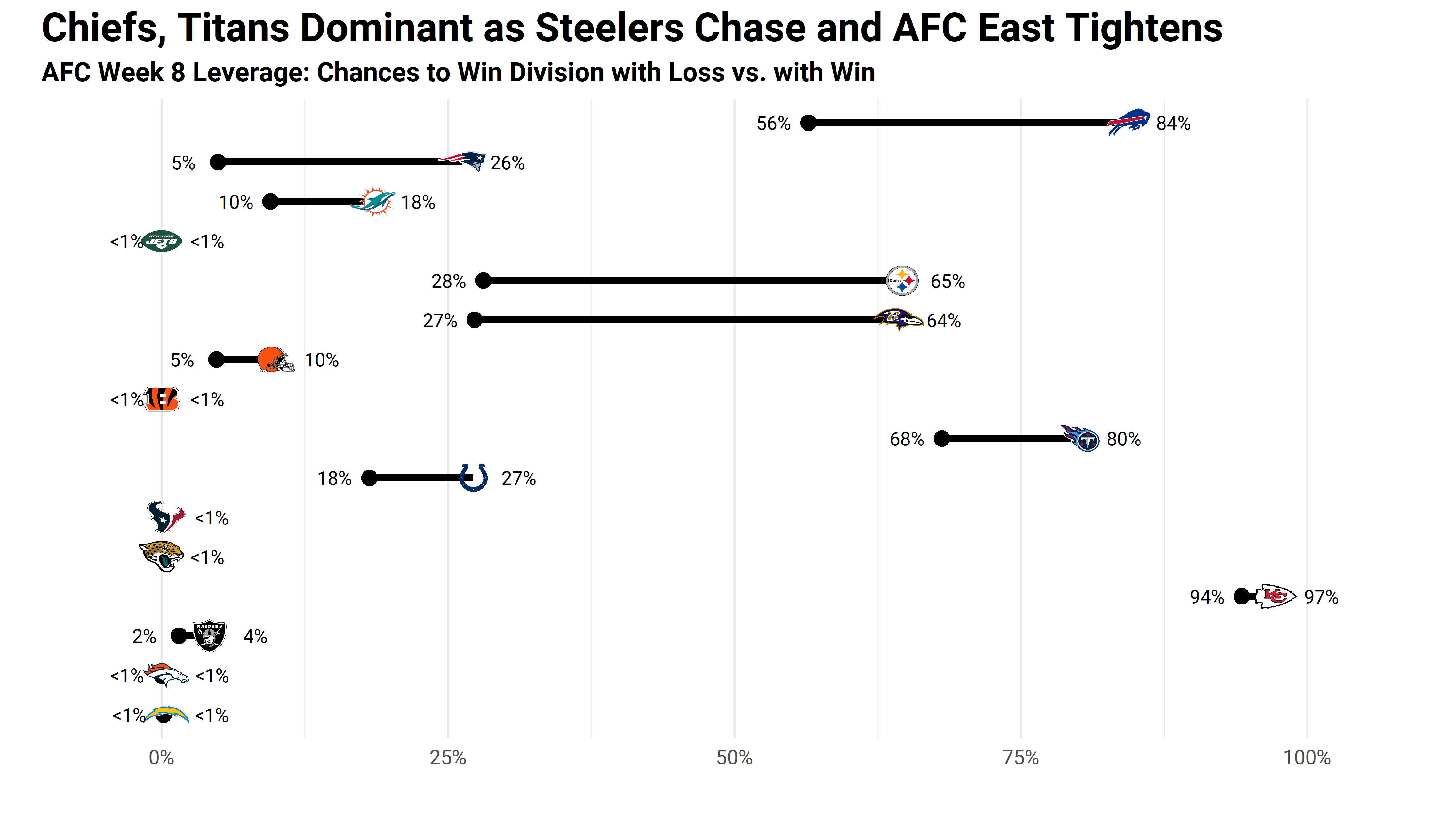 It goes without saying, but the leverage at stake in the AFC North bout between the Pittsburgh Steelers and Baltimore Ravens is enormous — not only will the victor be in the driver’s seat at the top of the conference’s best division, but they will also have a tiebreaker advantage over the other, pending the outcome of their second meeting on Thanksgiving.

The Bills are still the favorites to win the AFC East even with a loss to the Patriots, but a win makes it hard for anyone to catch them. The Tennessee Titans and Kansas City Chiefs still have commanding leads for their respective divisions. 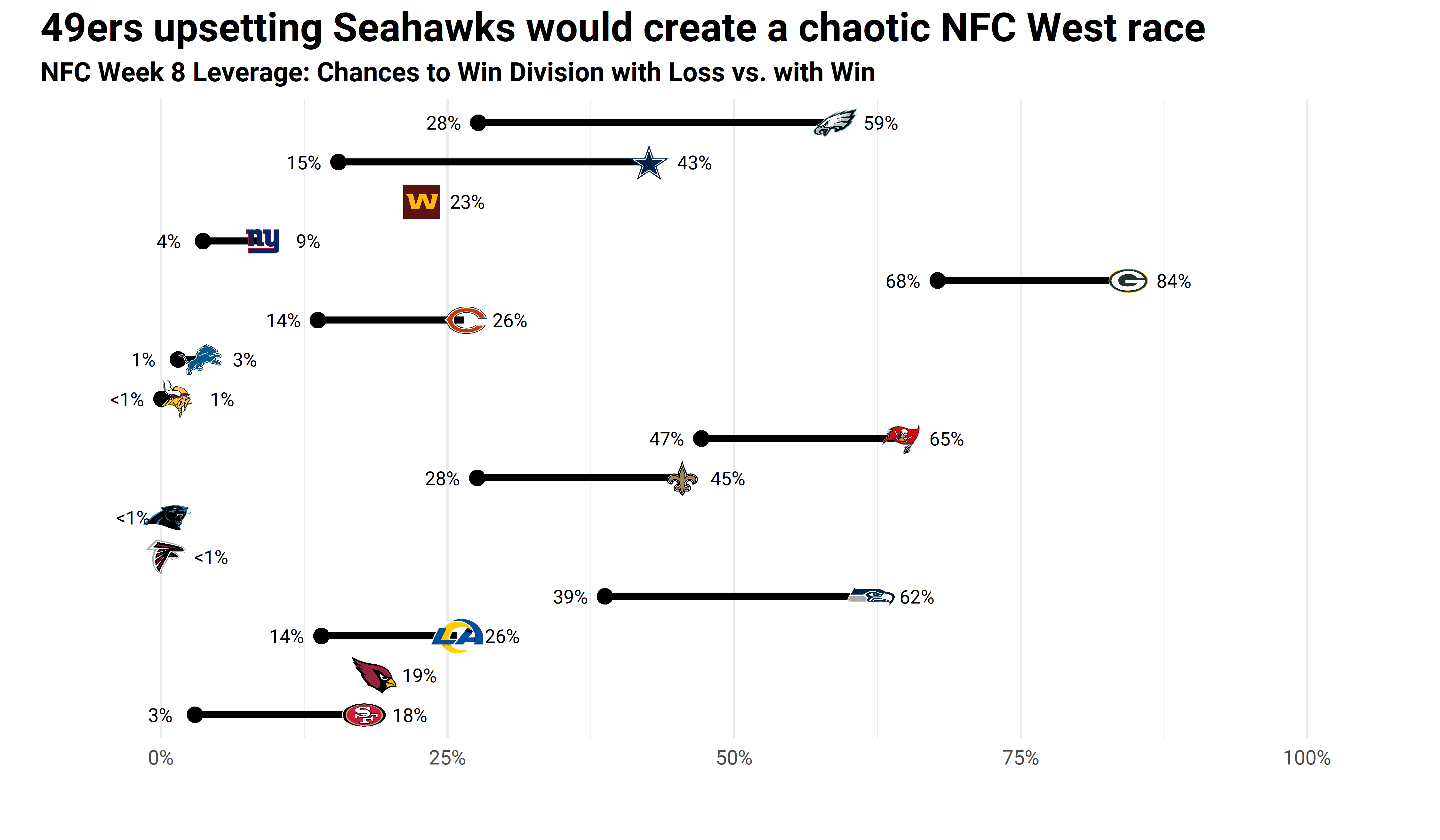 The Sunday Night Football game between the Dallas Cowboys and Philadelphia Eagles will be a significant determinant of who from that division gets the NFC’s fourth seed. However, the real action is in the NFC West, where Seattle can pull ahead with a victory over the 49ers, but an upset really would put the division up for grabs for all four teams.

The COVID-19 pandemic has complicated matters for sure, but home-field advantage has continued to drop over the course of the season. At this point, I would say it’s very likely that if you’re valuing home-field advantage at the past “rule of thumb” of  2.5-3 points, you’re probably overvaluing it.

The Week 7 closing total lines were 48.9, and even though the average total was higher than that at 50.6, the market is more aggressively dropping totals. Multiple games have moved down over 2 points since the lines opened, some even as many as 4 or 5. No games have moved upward by more than half a point.

Bettors who have been capitalizing on the success of overs in the season should respect the market here and adjust their totals expectations downward. This is especially true for outdoor stadiums, where the stronger winds of late fall have a negative impact on scoring.