It’s time for the final two weeks of the regular season. So, here are the usual playoff leverage charts to show what each team has at stake in Week 16 before we walk through my favorite NFL betting opportunities of the weekend. 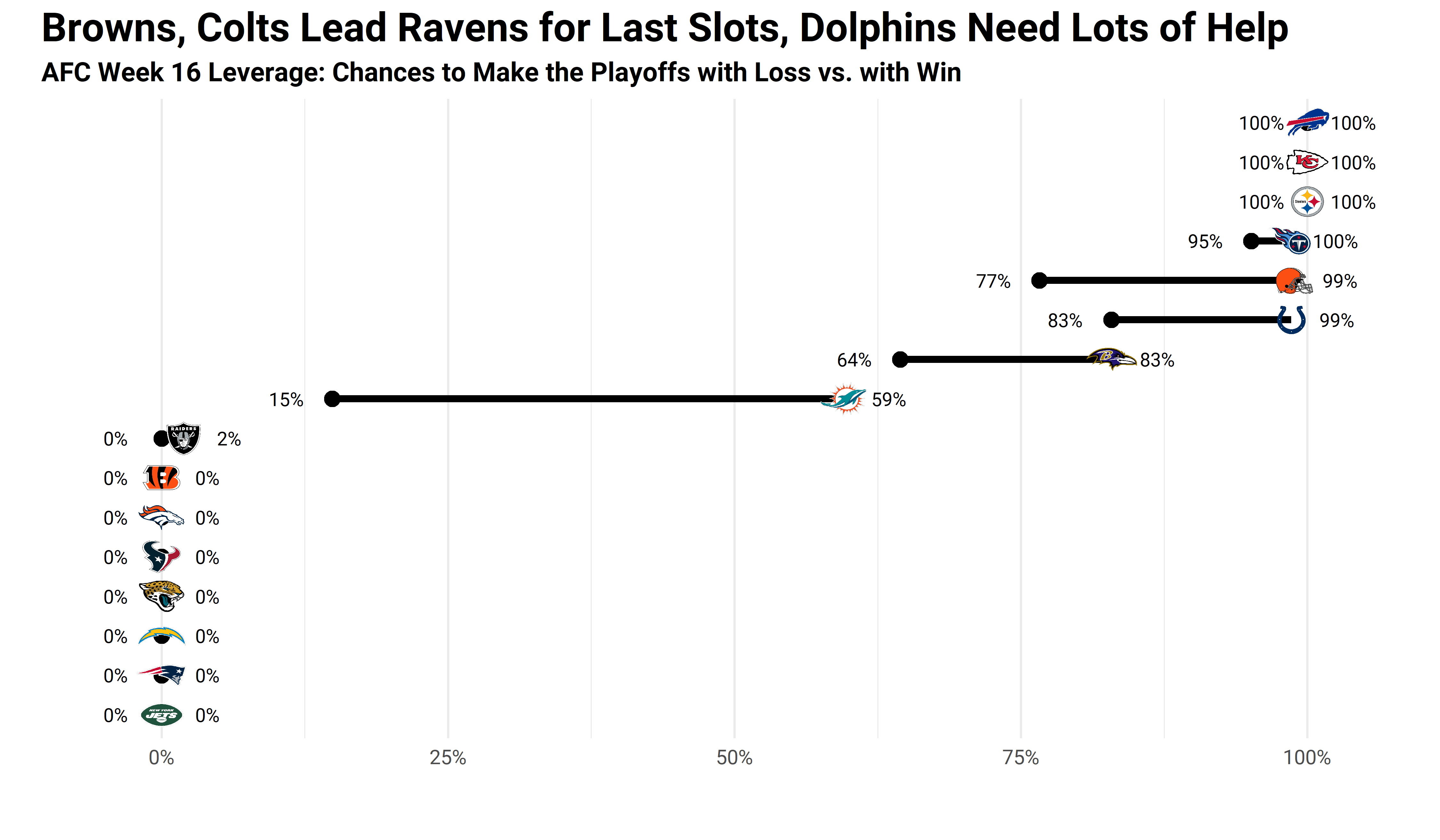 The Buffalo Bills, Kansas City Chiefs and Pittsburgh Steelers have all secured playoff berths; the Bills and Chiefs have won their division, and the Chiefs are a large favorite for the coveted playoff bye.

The Tennessee Titans can secure a playoff spot this week with a win over the Green Bay Packers, while the Cleveland Browns (playing against the New York Jets) and Indianapolis Colts (who take on the Pittsburgh Steelers) are both in great shape with a win.

The Baltimore Ravens are in a good position to be the seventh team, especially if they win against the New York Giants on Sunday. But they don’t fully control their own destiny and will be rooting for the other teams in contention to lose.

The Miami Dolphins have the most leverage of any AFC team this week when they play on Saturday night against the Las Vegas Raiders. The Raiders are still technically in contention but are eliminated with a loss and have a very low chance of advancing even with a win. 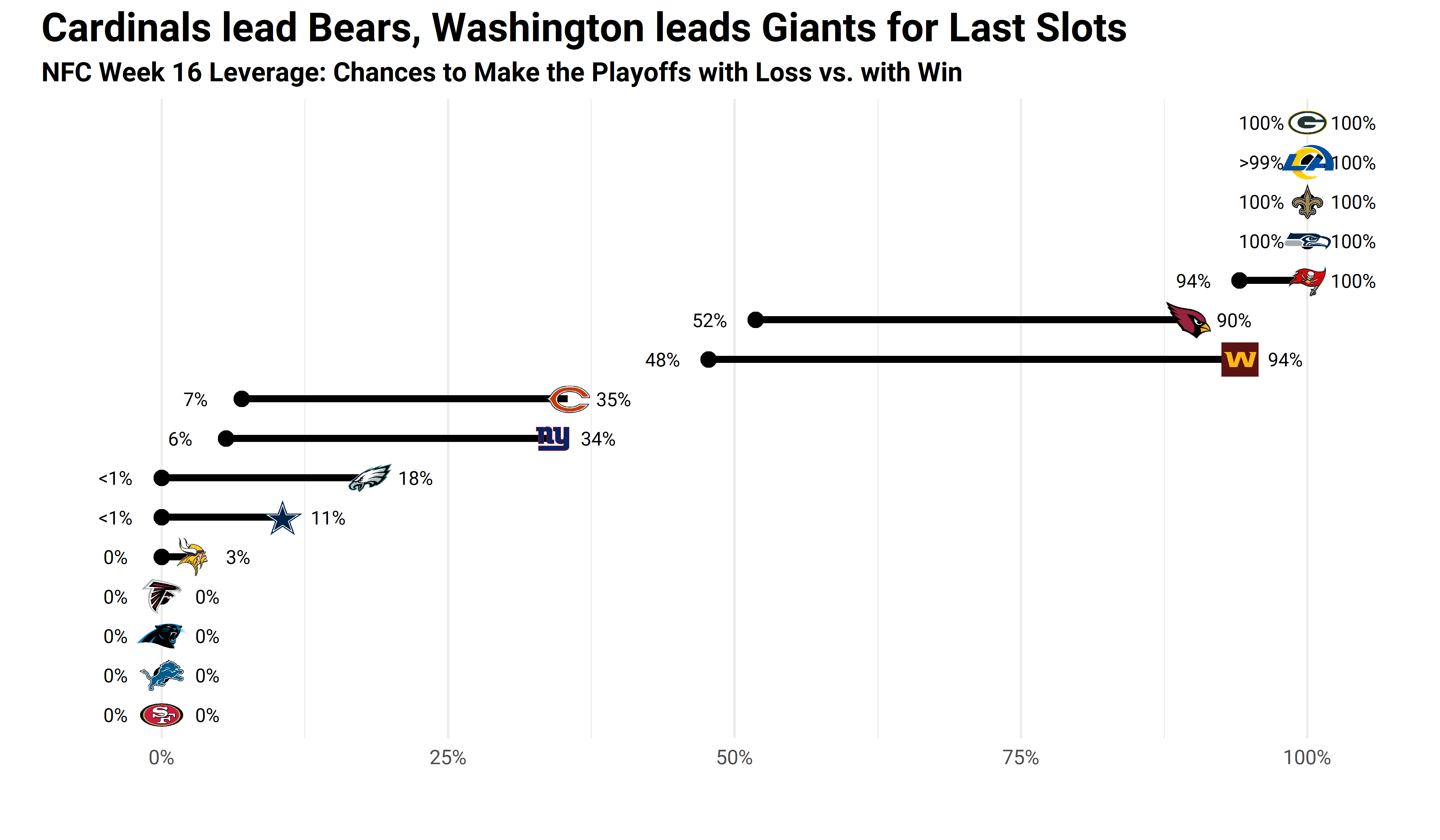 The Green Bay Packers, New Orleans Saints and Seattle Seahawks are all locked into a playoff berth. Despite coming off a huge upset loss to the Jets, the Los Angeles Rams nearly are, as well, even if they lose this week to the Seahawks. However, that game has a massive impact on the NFC West.

The Tampa Bay Buccaneers are also in great shape to secure a playoff berth and can do so with a win over the Detroit Lions this week.

The NFC East winner will be the NFC’s fourth seed, and the Washington Football Team is the favorite there. They have huge leverage in their Week 16 game against the team that head coach Ron Rivera was fired from last year, the Carolina Panthers.

The New York Giants are the next most likely team, but their game against the Ravens this week will be tough. The Philadelphia Eagles and Dallas Cowboys are playing against one another; both teams are still in contention but have a low chance of advancing.

The Arizona Cardinals are the leading team when it comes to controlling the seventh seed and will host the San Francisco 49ers on Saturday in an effort to put them in a very strong position.

The Chicago Bears are most likely to upset the Cards, especially if they defeat the Jacksonville Jaguars on Sunday. The Minnesota Vikings are still technically alive for this slot, but a loss Friday to the New Orleans Saints will eliminate them.

The important thing to watch for in Week 16 is if any team is in a position to rest their starters because their playoff chances or seeding cannot meaningfully improve.

The closest team to such a position is Buffalo, as the Bills have already secured their division and can still mathematically earn the top seed in AFC. However, it has a less than 1% chance of happening, as it requires multiple other games to go their way to boost their strength of victory tiebreaker over that of the Chiefs.

With that out of the way, on to the picks!

Saints quarterback Drew Brees is back from injury, but he didn’t look great last week against the Chiefs. The Saints did manage to finish right around the line (depending on when you got it), but that was mostly off the back of their defense.

The injury may still impact brees, but even if not, I assume that gets him most likely back to early 2020 levels, and unfortunately not the elite quarterback we’ve watched for years.