Week 5 AAF Team of the Week

The fourth week of action in the Alliance of American Football's first season is in the books, as are our grades for every player on every play of every game. Mirroring our Team of the Week from the NFL side of things, this season we'll award players to our team of the week in an attempt to shed light on the top performances from the previous weekend's slate of action. 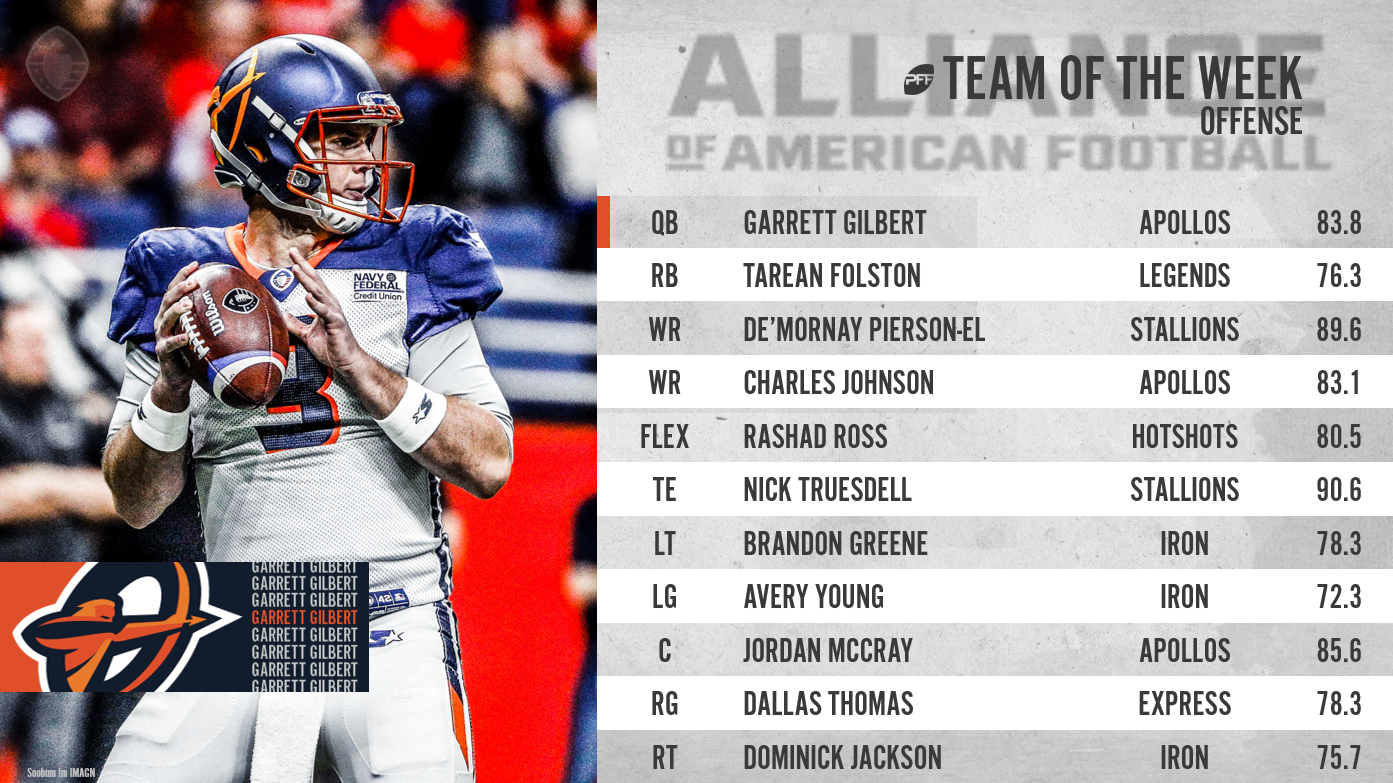 The league's top-graded quarterback was at it again, completing his passes at a high rate while testing the defense at the right time and maintaining the pace of the game for the Apollos. If he keeps this rate of play up, there's a legitimate chance Orlando could run the table through the whole season.

Folston again looked sharp as the Legends got their second win in as many weeks with Ken Zampese at offensive coordinator. Folston toted the ball just 11 times but etched out 83 yards that included six first-down runs, five missed tackles forced and 24 yards after contact.

It didn't quite go the way of the Stallions on Saturday, but in their comeback effort, Pierson-El was dominant. He hauled in 130 yards on eight catches, six of which went for a first down and broke four missed tackles after the catch for the league's top grade from a receiver in Week 5.

Johnson and Gilbert keep their respective places on the team of the week, as Johnson went for 83 yards on six catches and a touchdown. He has now hauled in at least 50 yards and three catches in every game this season as he leads the league in receptions and yards.

Ross is the AAF's league leader in receiving touchdowns, scoring his sixth of the year in the Hotshots come-from-behind attempt against San Antonio. Despite the loss, Ross still managed 106 yards on just five catches and saw a whopping 153.3 passer rating when targeted in Week 5.

The AAF has been lacking in tight end production through five weeks but that changed in Week 5. Truesdell secured one of the four touchdowns by a tight end, doubling the number of touchdowns scored by tight ends through the first four weeks. Truesdell brought down six receptions for a touchdown and three additional first downs on the evening.

Greene was solid across the board despite allowing a sack in pass protection. He finished with the league's second-highest pass-blocking grade and third-highest run-blocking grade among tackles in Week 5.

Young played a little bit of both guard spots for the Iron this weekend and was strong no matter where he suited up.  His 83.6 pass-blocking grade was the second best at any position along the offensive line this weekend.

Finding his way back on the team of the week, McCray didn't allow a single pressure in pass protection while his 84.0 run-blocking grade was the best regardless of position among offensive linemen in Week 5.

Thomas opened up holes left and right for the Express on the ground, leading the way with his 76.3 overall run-blocking grade. He also allowed just one pressure in pass protection. 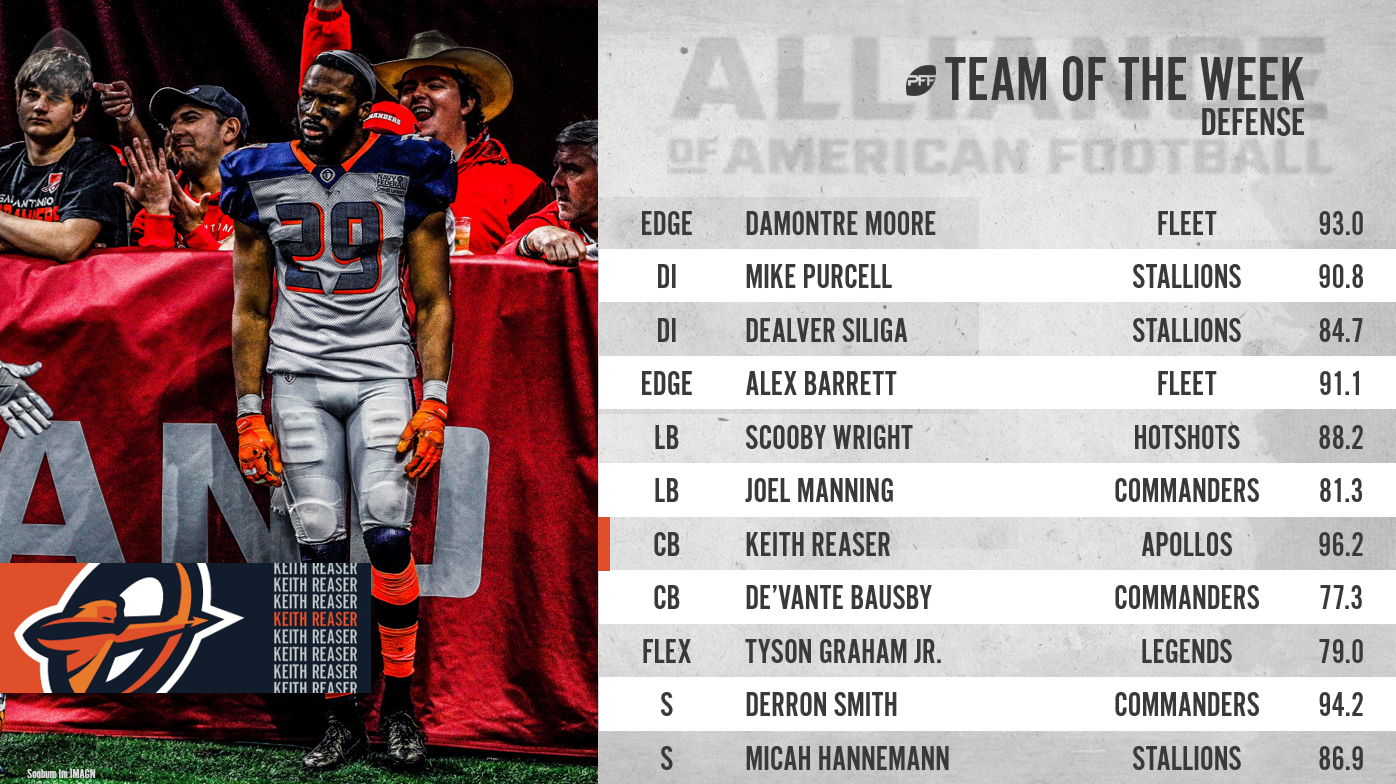 Moore is making a case for defensive player of the year in the AAF, increasing his pressure total on the season to 27 with his 7-pressure performance against Salt Lake in Week 5. He got home with two sacks and three additional QB hits on just 38 pass-rushes this weekend.

Purcell is joined by his interior teammate as they led the Stallions defense despite the result. Purcell led all interior defensive linemen with six QB pressures that included three QB hits on his 40 pass-rushes.

Siliga got it done on the pass-rush as well with four pressures, but his 90.4 elite run-defense grade was the best at the position this weekend.

Barrett also got home with pressures but he made an even bigger impact in run defense for San Diego, leading the position with an elite 93.9 run-defense grade.

That's the Scooby we remember from his college days, flying around to the football like a man possessed. He recorded three solo tackles that went for two stops and limited receivers to just nine yards on his four targets, two receptions allowed stat line.

The former Iowa State quarterback looked the part of a run-stuffing linebacker for San Antonio, making three defensive stops and forcing a fumble on just 12 snaps against the run.

For the fifth time in as many weeks, an Apollos cornerback finds their way on the team of the week. Reaser is by far the league's highest-graded player and making a case for MVP with his dominant season so far. His pick-6 was just another highlight-reel moment that will likely see him called back to the NFL in the near future.

Bausby was strong in coverage for San Antonio, seeing four passes come his way while intercepting one, breaking up another and allowed just eight yards on one catch. In total, his 0.0 passer rating when targeted matched Reaser's for best on the weekend.

After a two-game stint with mediocre grades, Graham finds himself on the team of the week with strong coverage grades and tackling numbers. He didn't miss a single tackle on six attempts and found his way to an interception and a pass breakup on 22 snaps in coverage.

Smith is the only real pressing threat to Reaser's defensive player (and even MVP) of the year awards as Smith also recorded a pick-6 that just tipped the iceberg of what his season has been like. He was four targets, came away with two interceptions and a pass breakup in coverage while he also stuck his nose in on run defense for a defensive stop on the day.

Living up to his college billing, Hannemann was a force against the run and blanketed receivers in coverage. On 49 snaps against the pass, he wasn't targeted a single time yet he still recorded four tackles without a miss in run defense.