We're well past the midway point of the season and already five weeks removed from our first 2019 NFL Draft Board update. The second version of the PFF Draft Board continues to feature a healthy mix of familiar names and those who have already shown next-level ability in limited samples.

The PFF Big Board series is brought to you by Eckrich, the Official Smoked Sausage of the College Football Playoff.

Bosa logged 113 defensive snaps this season before it was over, accumulating a 92.6 overall grade (was first in the nation when he qualified) and 11 pressures on just 69 pass-rushes.

Herbert's adjusted completion percentage on deep passes of 54.2% ranks eighth in the class among quarterbacks with at least 20 deep attempts. Despite a national-leading six dropped passes on deep balls, Herbert's nine deep touchdowns are still fourth in the country. 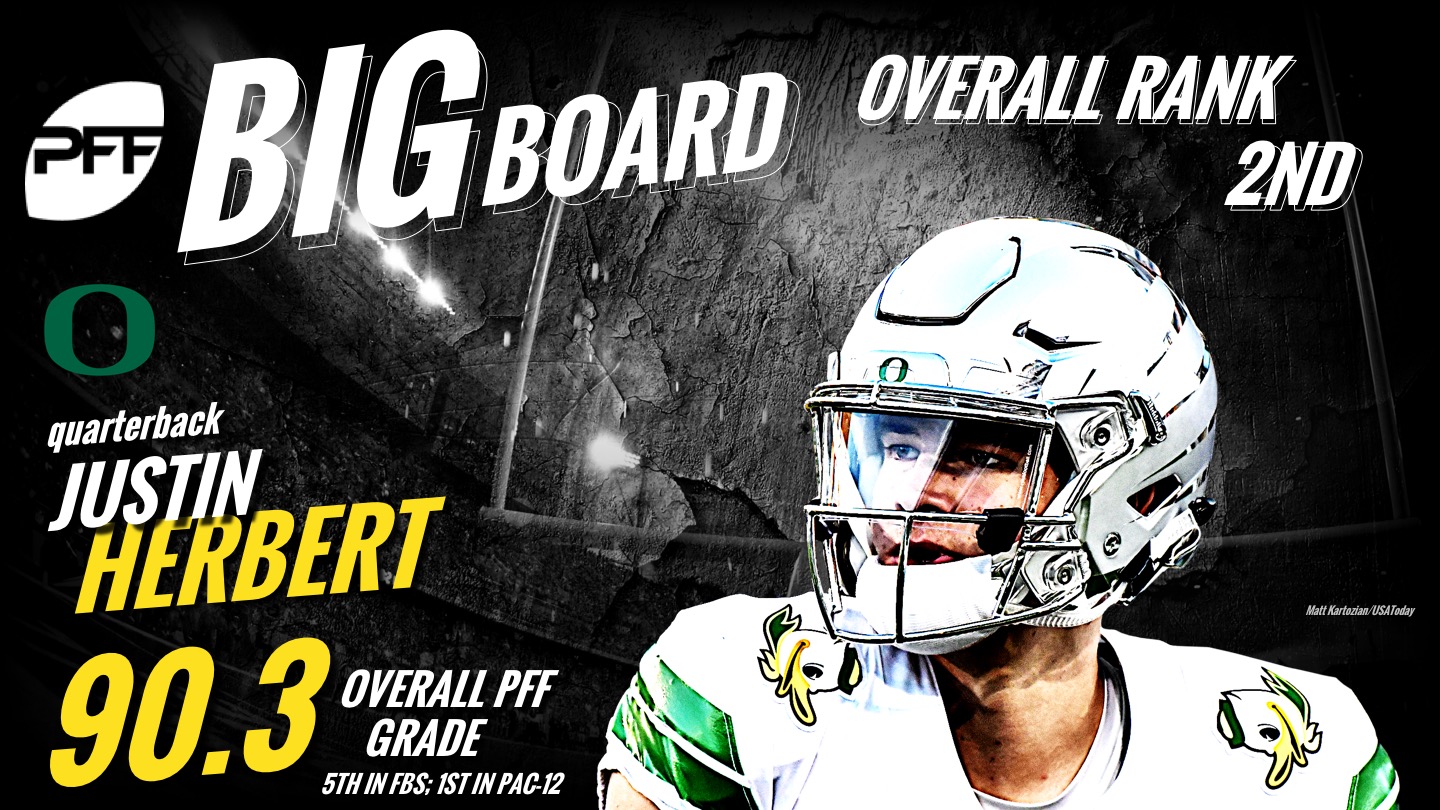 Williams has allowed a 40.1 passer rating into his coverage, just 0.5 points higher than if the quarterback threw the ball in the dirt on every pass,

Williams is joined by Temple's Michael Dogbe as the only two interior defensive linemen to currently rank in the top five in terms of most pressures and most defensive stops. Dogbe, however, has spent 164 more snaps on the field than Williams. 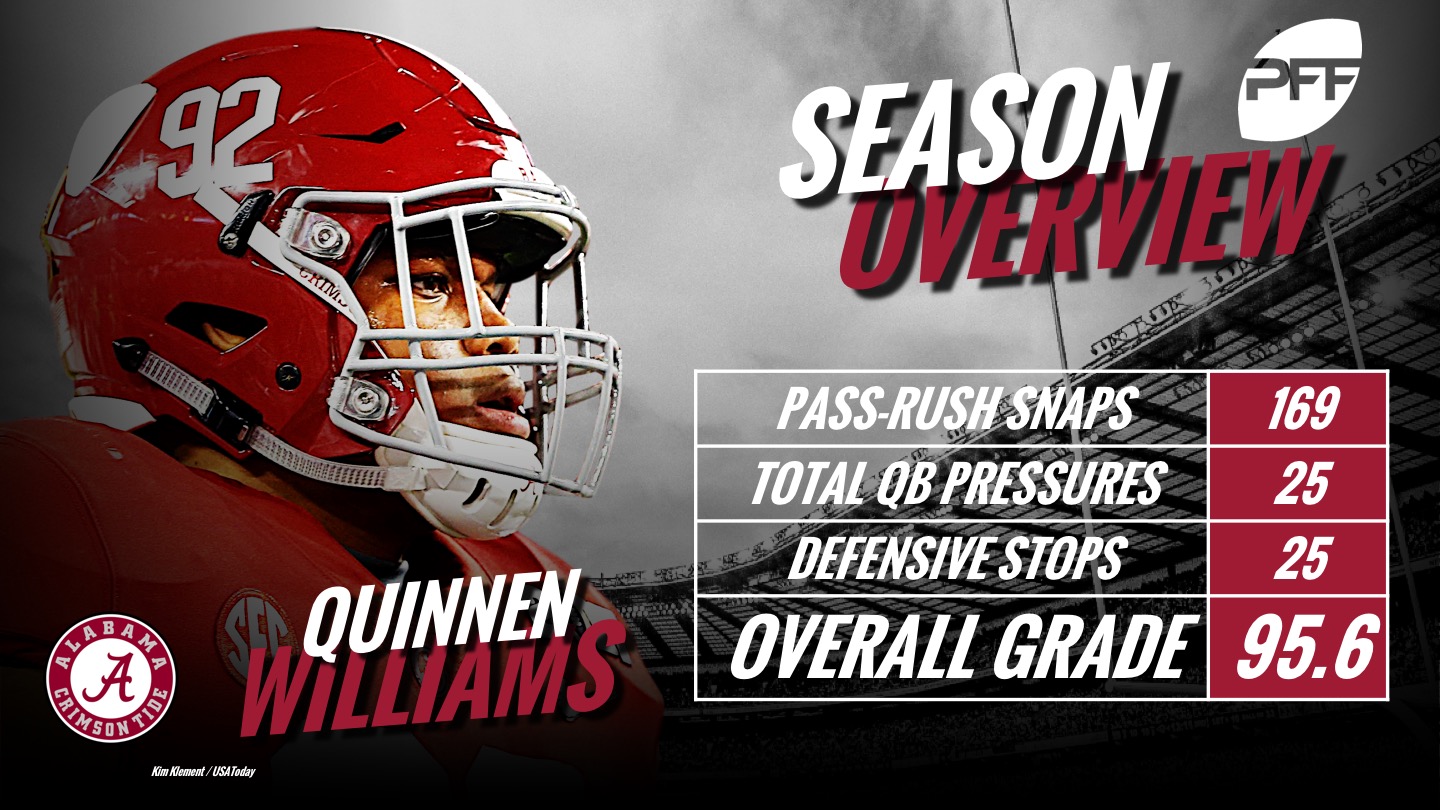 Thompson not only ranks first among all safeties in overall grade (92.0), he also leads all that nation's safeties with his 91.3 grade in coverage.

Simmons has pulled down 16 defensive stops and 13 total QB pressures this season.

Adding to his impressive three-year resume, Oliver is just four QB pressures away from his career-high total of 27 that he set in 2017. He has brought in 24 pressures already this year, on 165 fewer pass-rushes than last season. 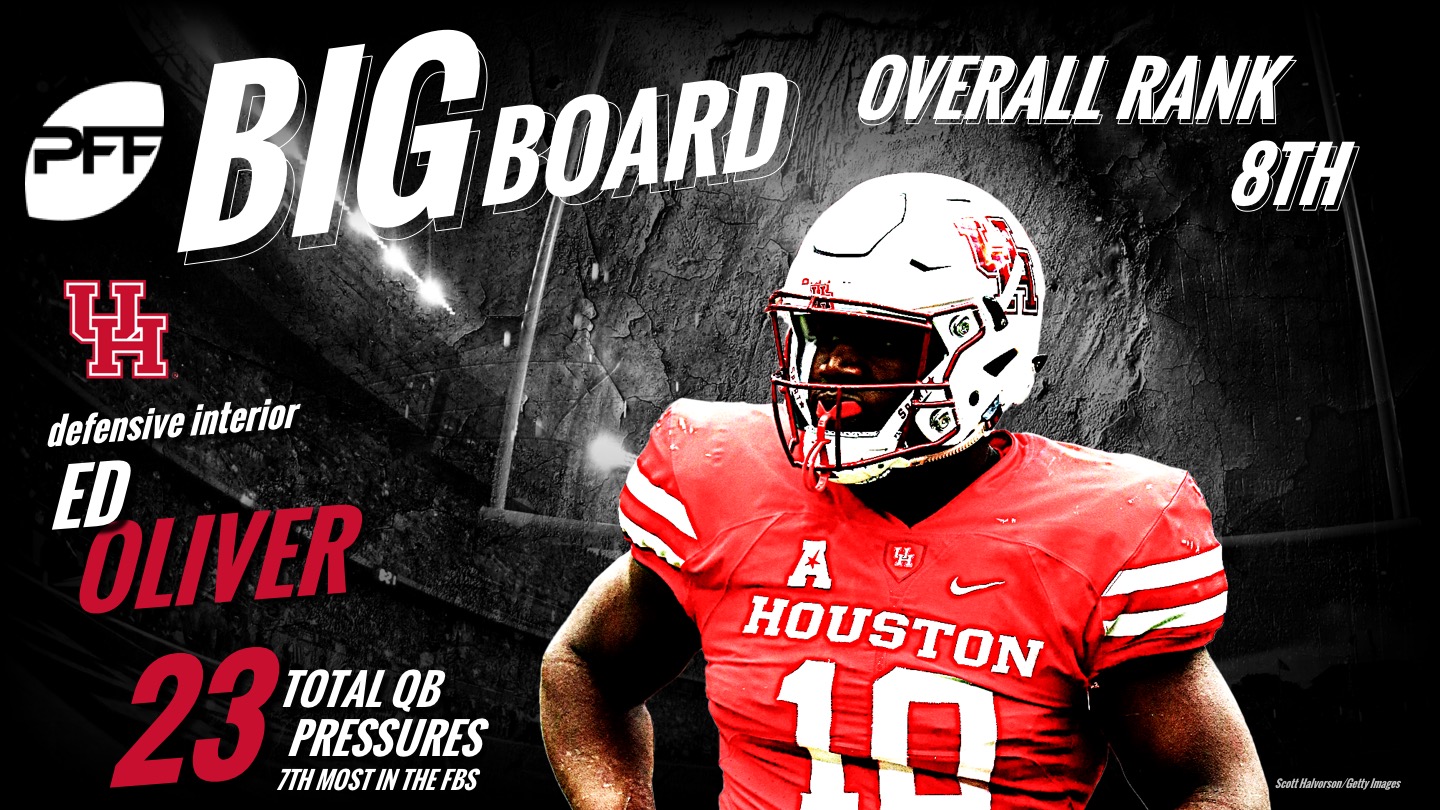 Currently the second-highest graded tackle in the country behind only Georgia's Andrew Thomas (175 fewer snaps for Thomas), Williams has allowed just four total QB pressures on 226 snaps in pass protection.

Playing along one of the nation's most talented defensive fronts, Lawrence has racked up 17 QB pressures despite being kept off the stat sheet in terms of sacks.

Arcega-Whiteside has hauled in 13 contested catches this season, good enough for third in the country. 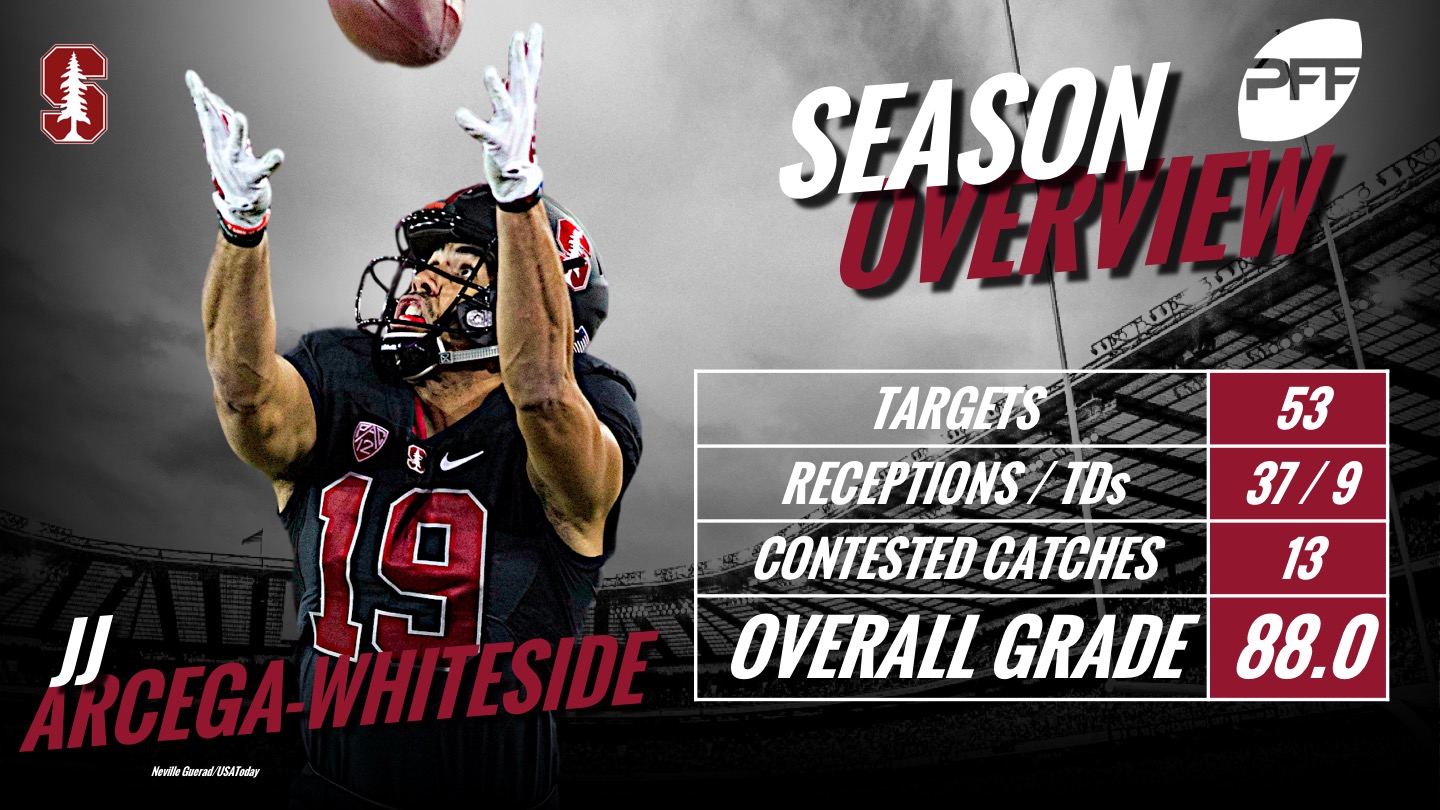 Risner has been dominant in pass protection, allowing just two pressures (a QB hit and one hurry) on his 227 pass-blocking snaps.

Harry currently ranks 13th in the nation with 11 missed tackles forced after the catch.

Burns leads the nation in pressures with 46, six more than the next closest FBS defender. 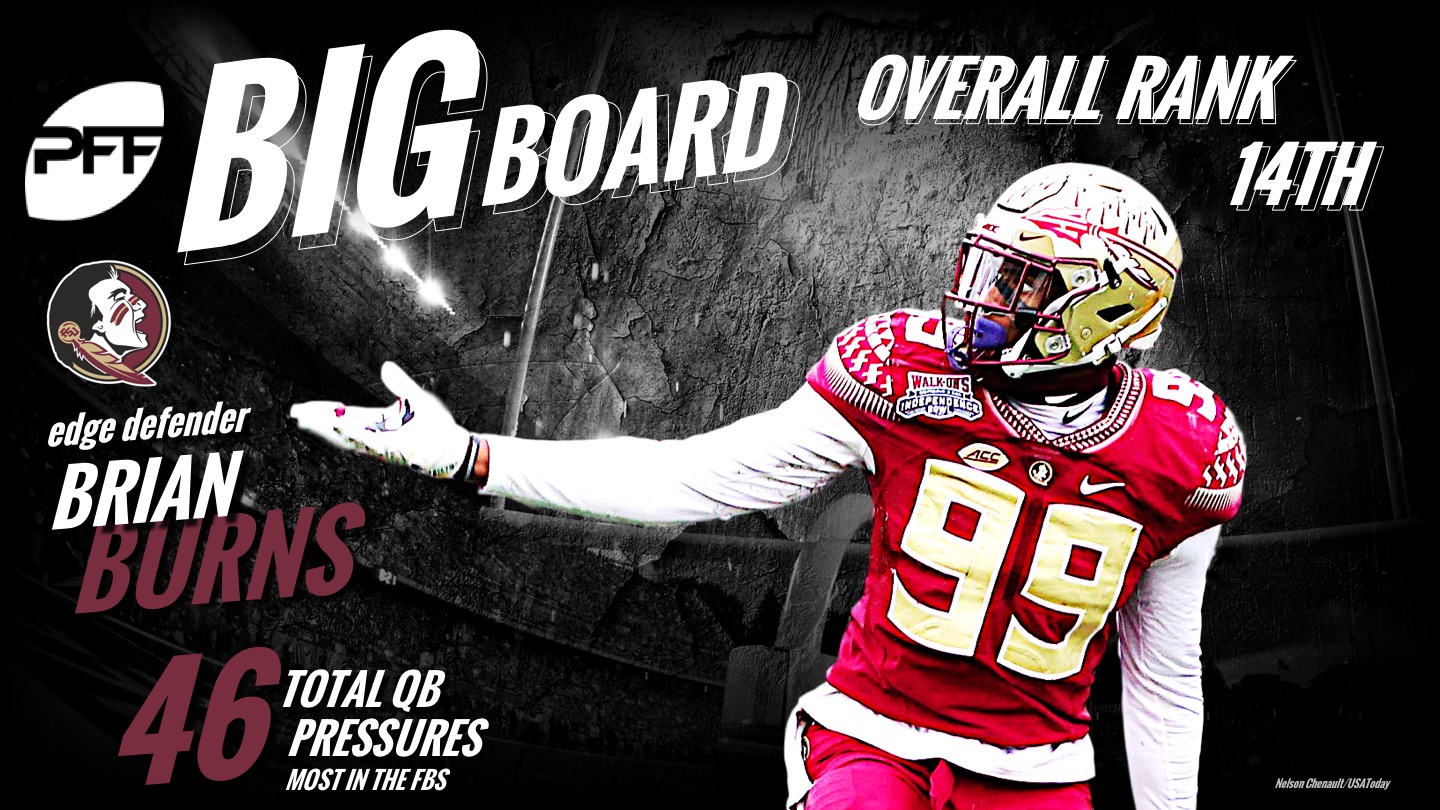 Jones' pick-6 against TCU is one for the highlight reel, yet he's consistently made plays this year. His 23 total QB pressures rank tied for seventh among interior defensive linemen.

Brown currently ranks second in the nation with 798 receiving yards from the slot.

Murphy has given up just 37 yards after the catch this season while breaking up another 12 targets. 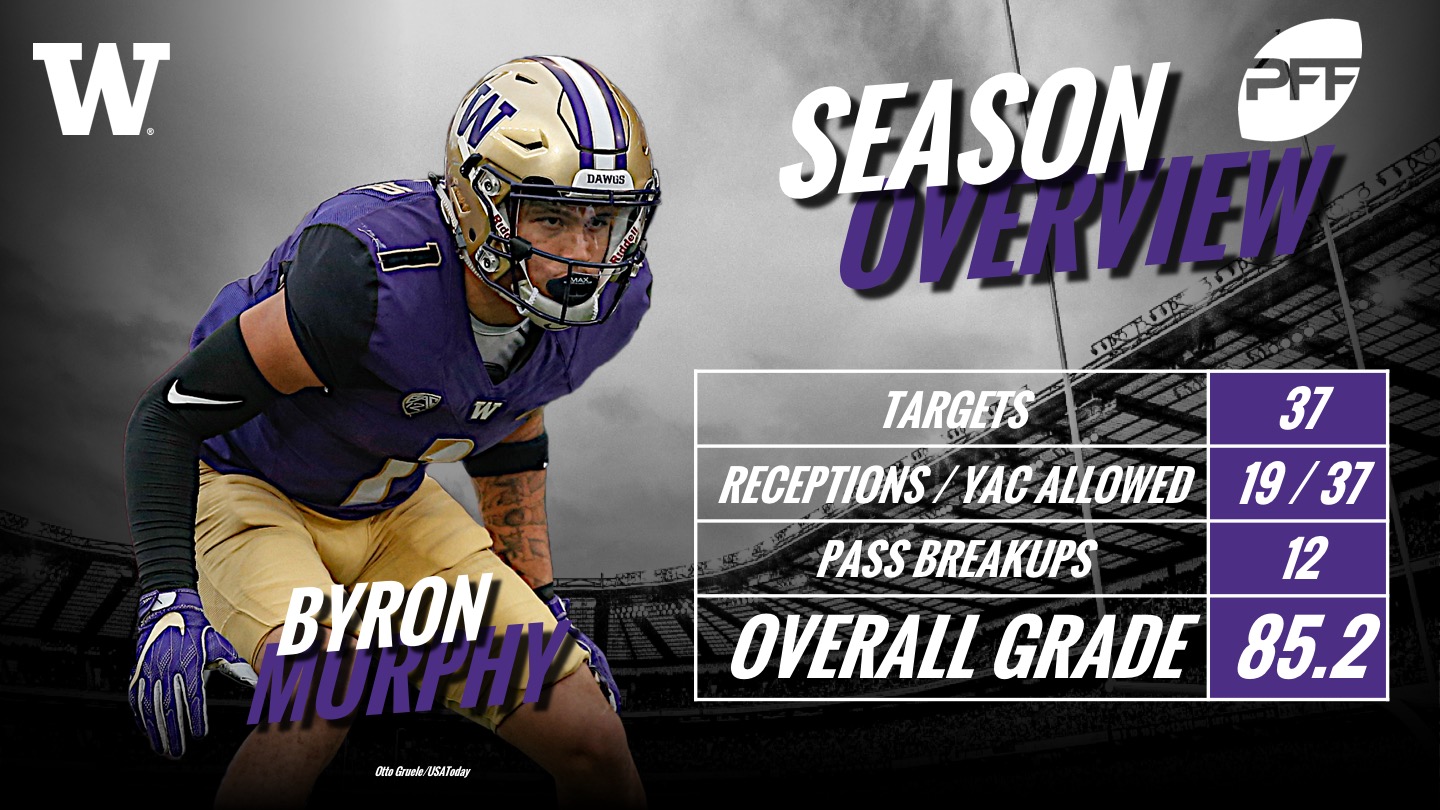 Brown averages 9.8 yards after the catch per reception, good enough for seventh among receivers with at least 25 targeted passes.

Fant is tied for the national lead in touchdowns at the tight end spot with six, as he has accumulated 118 yards after the catch and sports a 135.2 passer rating when targeted. 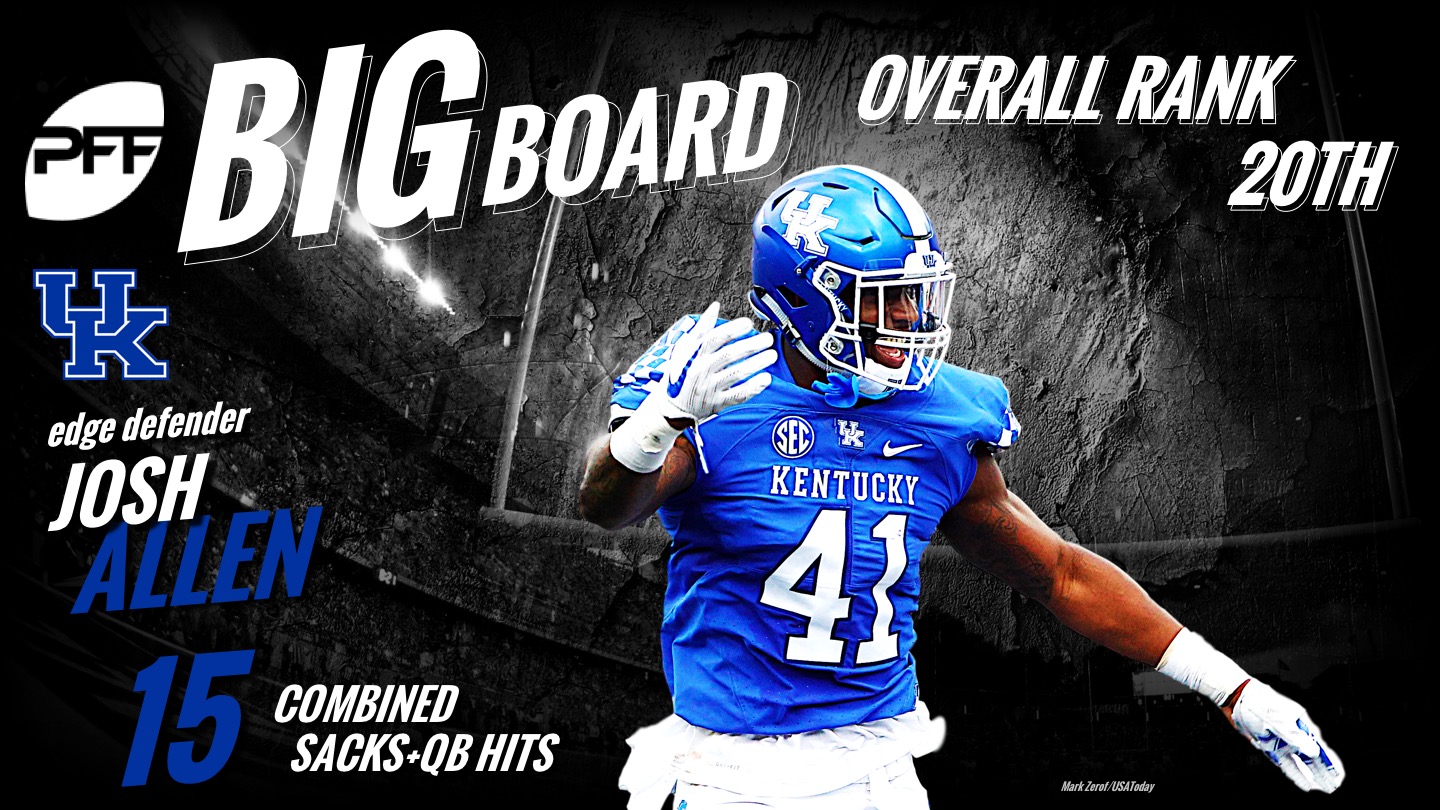 10 of Polite's 24 total pressures have ended with the quarterback on the ground either by a sack (5) or a QB hit (5).

Among linebackers with fewer than 70 pass-rush attempts, White ranks second in the nation with 17 QB pressures. He's recorded those on just 58 pass-rushing snaps.

Haskins currently holds the nation's ninth-highest adjusted completion percentage at 78.5%. Of his 91 incompletions, 17 have been dropped, three have been thrown away, four were thrown as he was being hit and another was batted at the line of scrimmage. 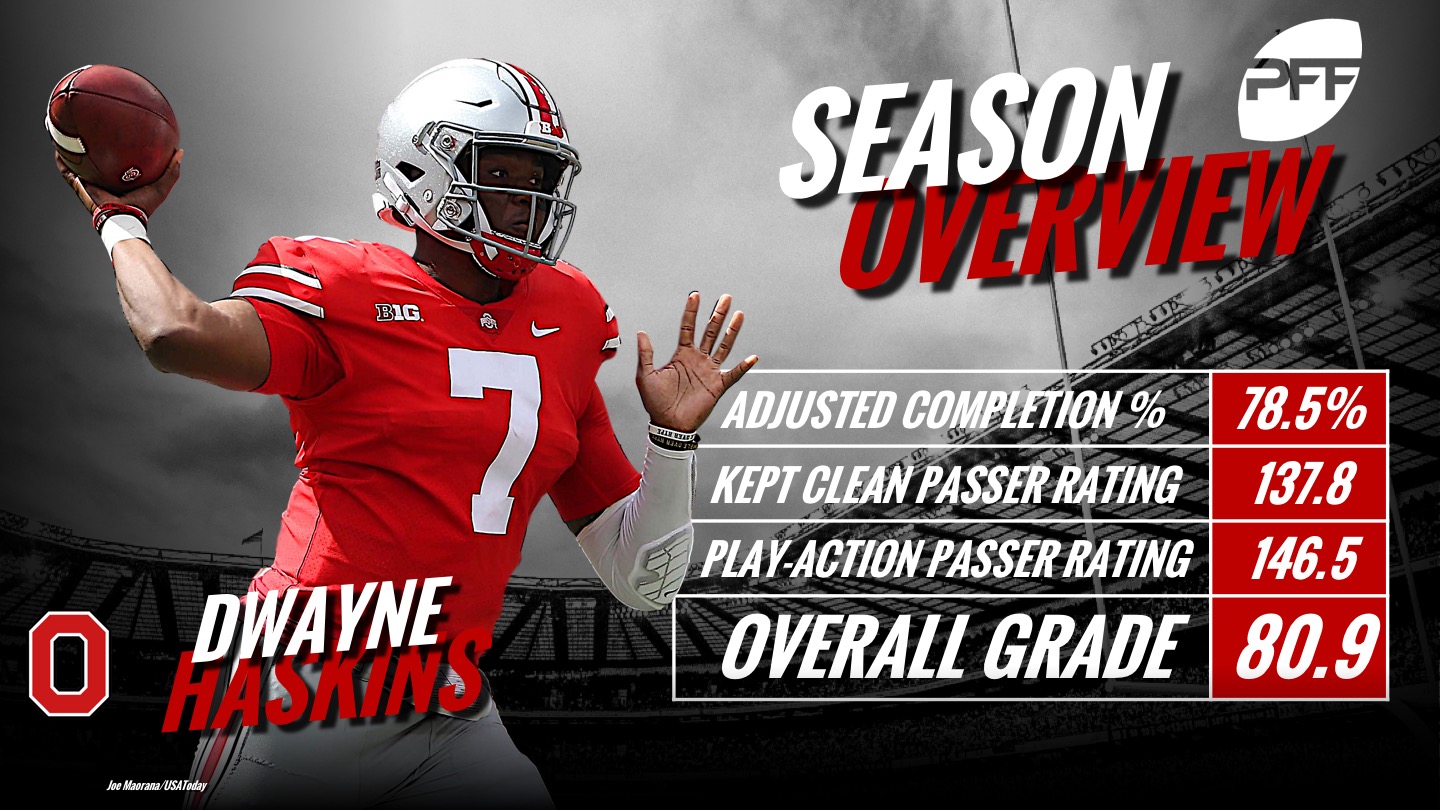 After missing some time with injury, 16 of Johnson's 24 receptions have either gone for a touchdown (5) or a first down (11).

Grier holds the nation's fourth-highest passer rating when kept clean from pressure at 136.4.

Tillery is second among all defensive interior players with his 26 total QB pressures. He's recorded seven sacks and four QB hits with an additional 15 hurries. 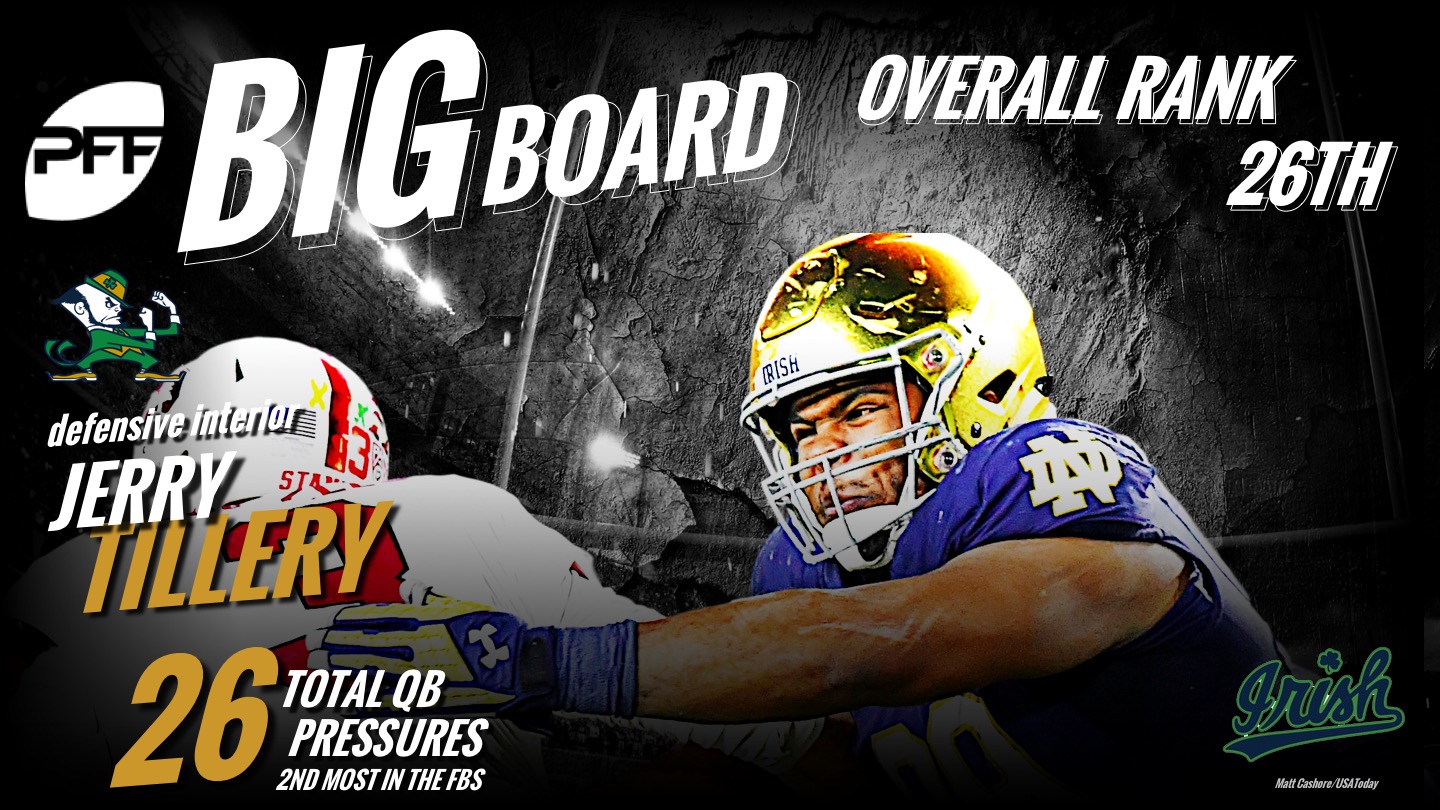 Oruwariye has seen 54 targets this season, fourth-most in the FBS and has broken up eight passes and intercepted two more.

In coverage, Coney has been targeted 21 times as the primary coverage defender, allowing just nine receptions for 45 yards. Most impressively, he's allowed just 30 yards after the catch and no passes longer than 16 yards.

Little's 90.2 pass-blocking grade is fourth in the country as he's allowed just four pressures on 311 snaps in pass protection. 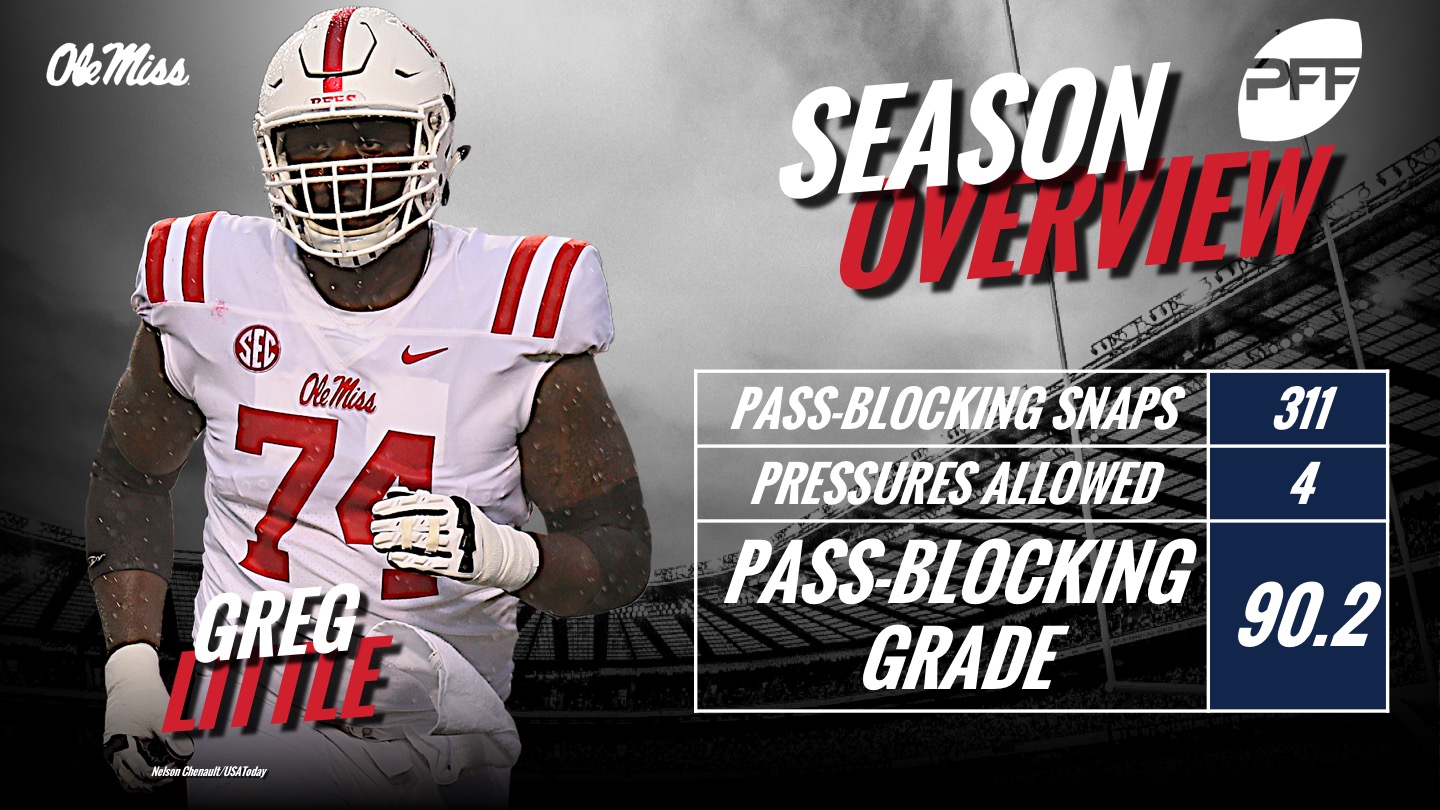 Biadasz has allowed just four pressures on 166 pass-blocking snaps while his 80.8 run-blocking grade is good enough for second in the nation.

Breaking out in 2018, Throckmorton has allowed just eight pressures (all hurries) on his 255 pass-blocking snaps.

Bush has gotten home with five sacks on just 47 pass-rushes while also not allowing a reception longer than 15 yards on 18 targeted passes as the primary coverage defender. 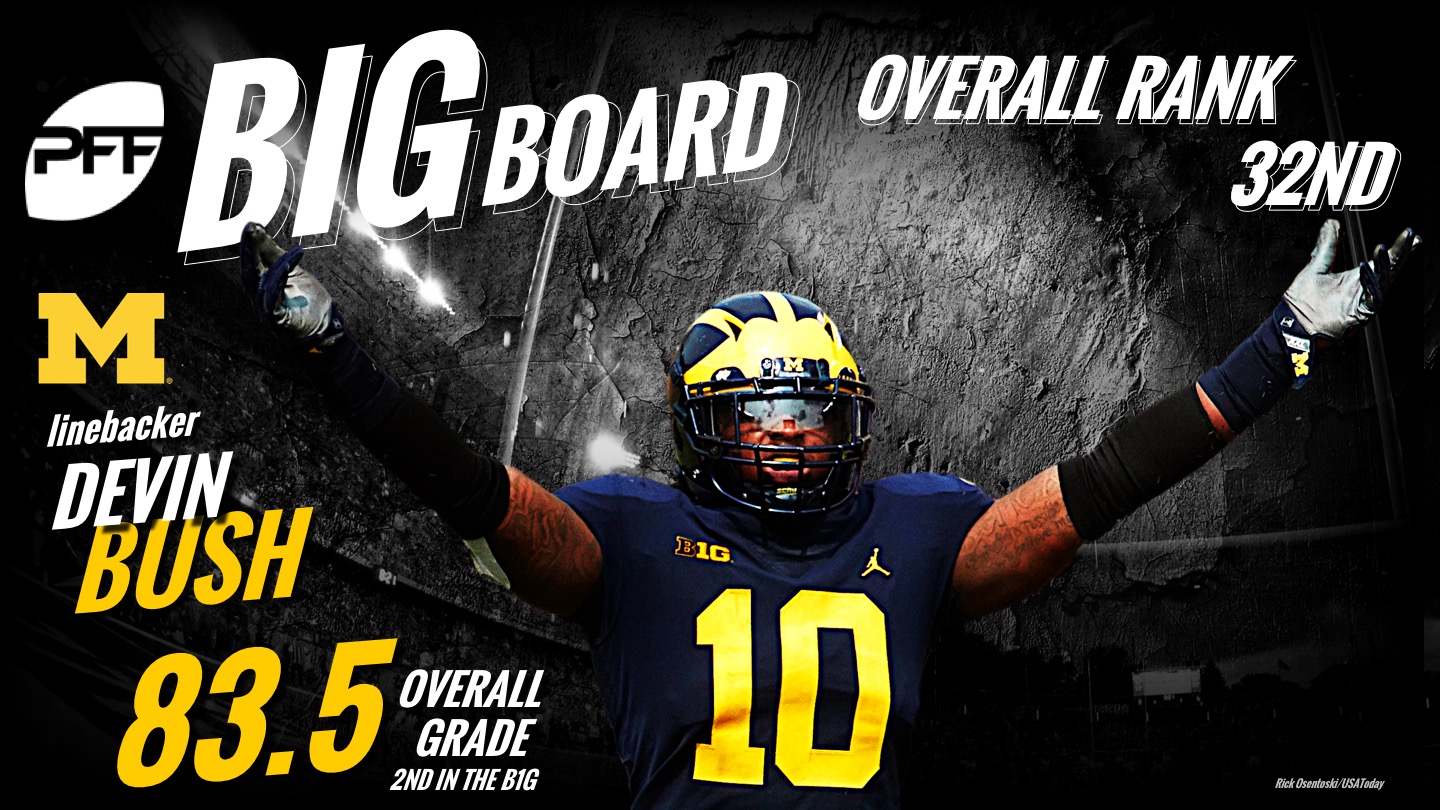