With eyes towards the 2018 NFL Draft, here are the players to keep your eyes on in the College Football Playoff semifinal in the Rose Bowl Game. 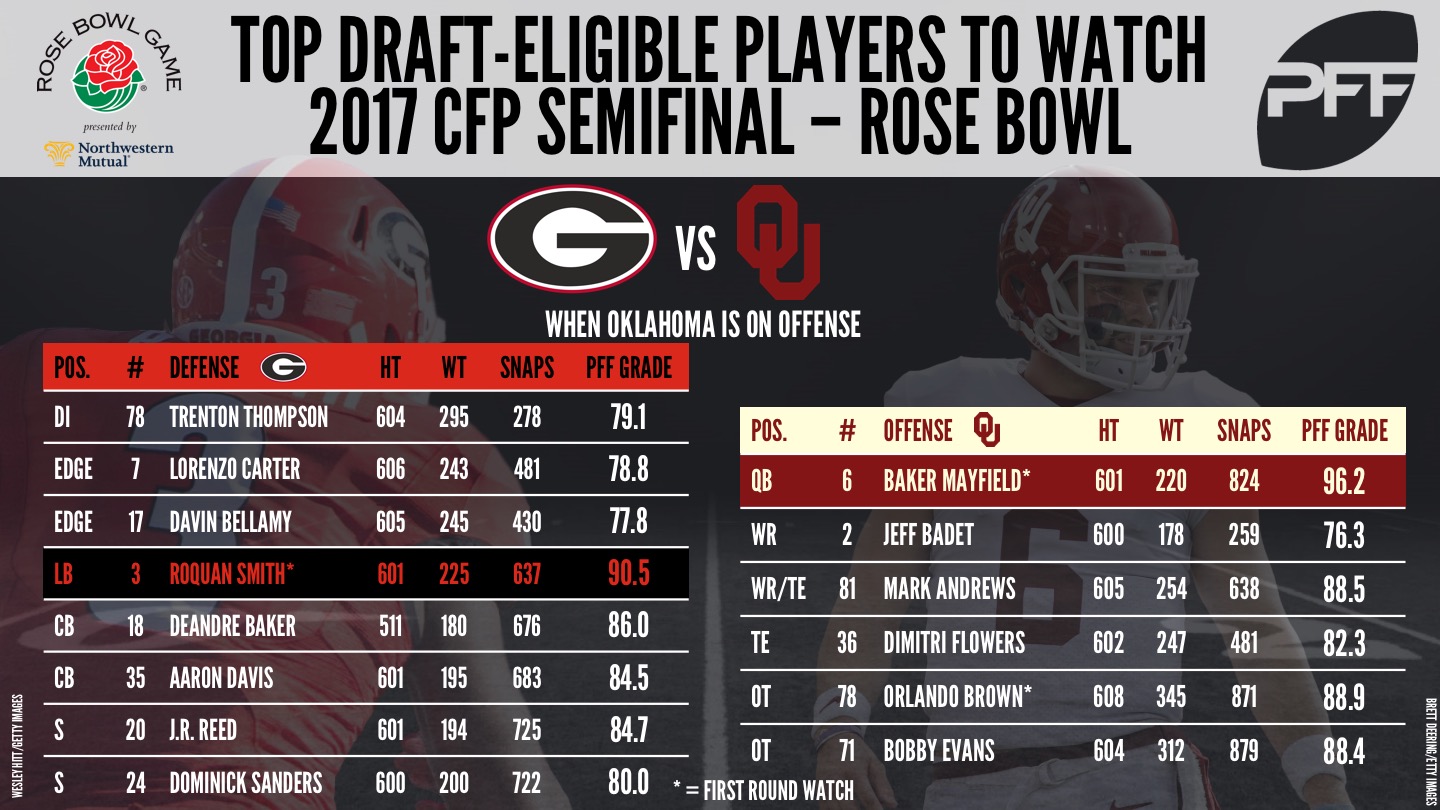 When Oklahoma is on offense:

Heisman Trophy winner, quarterback Baker Mayfield sits atop virtually every advanced statistical category of PFF. This includes his 82.6 adjusted completion percentage (which accounts for drops, throw-aways, spikes, passes batted at the line of scrimmage hits absorbed during the release of the ball), passer rating on deep throws (134.8), under pressure (105.3) and off play-action (156.0), as well as his 85.4 adjusted completion percentage from a clean pocket. Yes, his size, mechanics and some of his antics are concerns for the next level, but there’s no denying how incredibly productive he’s been on the field this season.

Orlando Brown has excelled at protecting his quarterback and has only allowed two sacks over the course of the last two seasons. In 2017, Brown only allowed one sack, no QB hits and eight hurries on his 409 pass-block snaps. Brown’s pass-blocking efficiency rating of 98.3 ties him at No. 9 among all FBS draft-eligible offensive tackles. Brown should be one of the first tackles drafted in 2018.

Mark Andrews has been one of the more productive deep threats at the tight end position. In 2017, Andrews caught all nine of his catchable deep targets – 20 yards or more downfield – for 289 yards and two touchdowns. Andrews’ nine deep catches and 289 yards both rank first among all FBS draft-eligible tight ends. He is also a dangerous slot receiving option for the Sooners and his 47 receptions, 817 yards, five touchdowns and 3.24 yards per route run from the slot all rank him first as well among all FBS draft-eligible tight ends.

The Georgia defense has collectively been outstanding this year, but linebacker Roquan Smith is the clear “top dawg.” His 14.5 run stop percentage ranks sixth among all FBS linebackers this year, and his 61 total stops ranks fourth among 2018 draft prospects at his position. Even more impressive is the fact he’s missed just two total tackles this season, helping him rank third in tackling efficiency among all linebackers with at least 300 total snaps.
The biggest test for Mayfield and Co. in the passing game is junior cornerback Deandre Baker, who has allowed just 41.7 percent of passes into his coverage to be completed this year. He has yet to allow a touchdown, and has successfully defended a total of 11 passes while yielding a passer rating against of just 39.9. – @PFF_Josh

The Georgia edge-rushing duo of Lorenzo Carter and Davin Bellamy proved difficult to stop all season long as they notched 50 combined QB pressures on their 384 collective pass-rushing snaps. They brought in three sacks each and were equally disruptive in limiting big offensive plays, registering 22 and 15 defensive stops, respectively. 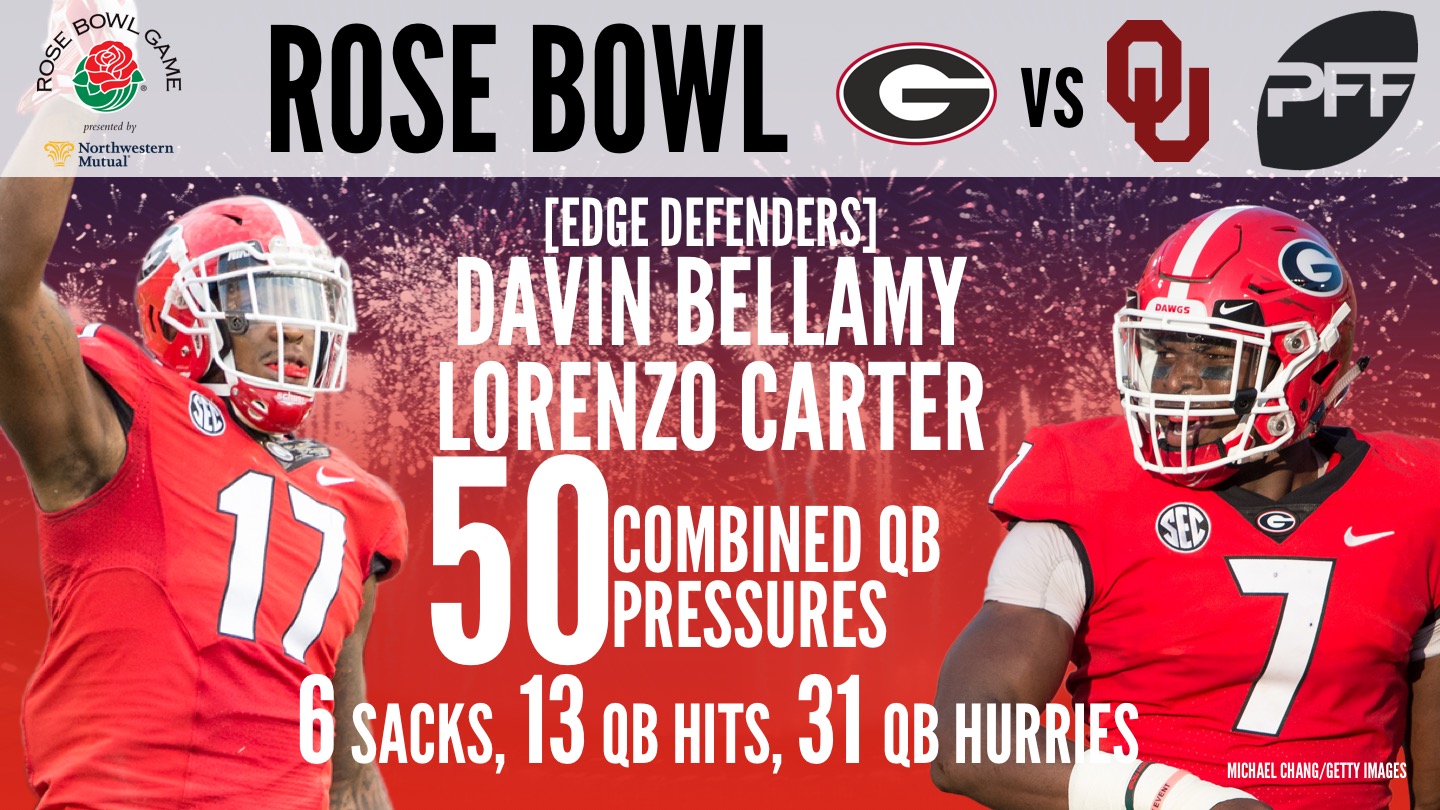 Georgia also holds a pair of talented safeties in Dominick Sanders and J.R. Reed. Sanders holds the Georgia record for most interception return yards and is one interception away from tying the record for most career interceptions (16) in a Bulldogs uniform. Add to his credit another 12 pass breakups and and over his career, Sanders has been targeted 129 times, yet allowed just a 29.8 passer rating on throws into his coverage.

Reed, the lesser-targeted safety of the duo, has allowed just 60.9 percent of passes thrown his way to be caught (14-of-23) and has two interceptions and four pass breakups to his name this season. Impressively enough, Reed has brought in nine total QB pressures on just 15 pass-rush snaps this year, rounding out his ability to find the football. Reed has said he is returning for his final season in Athens, but remember the name. – @PFF_Cam 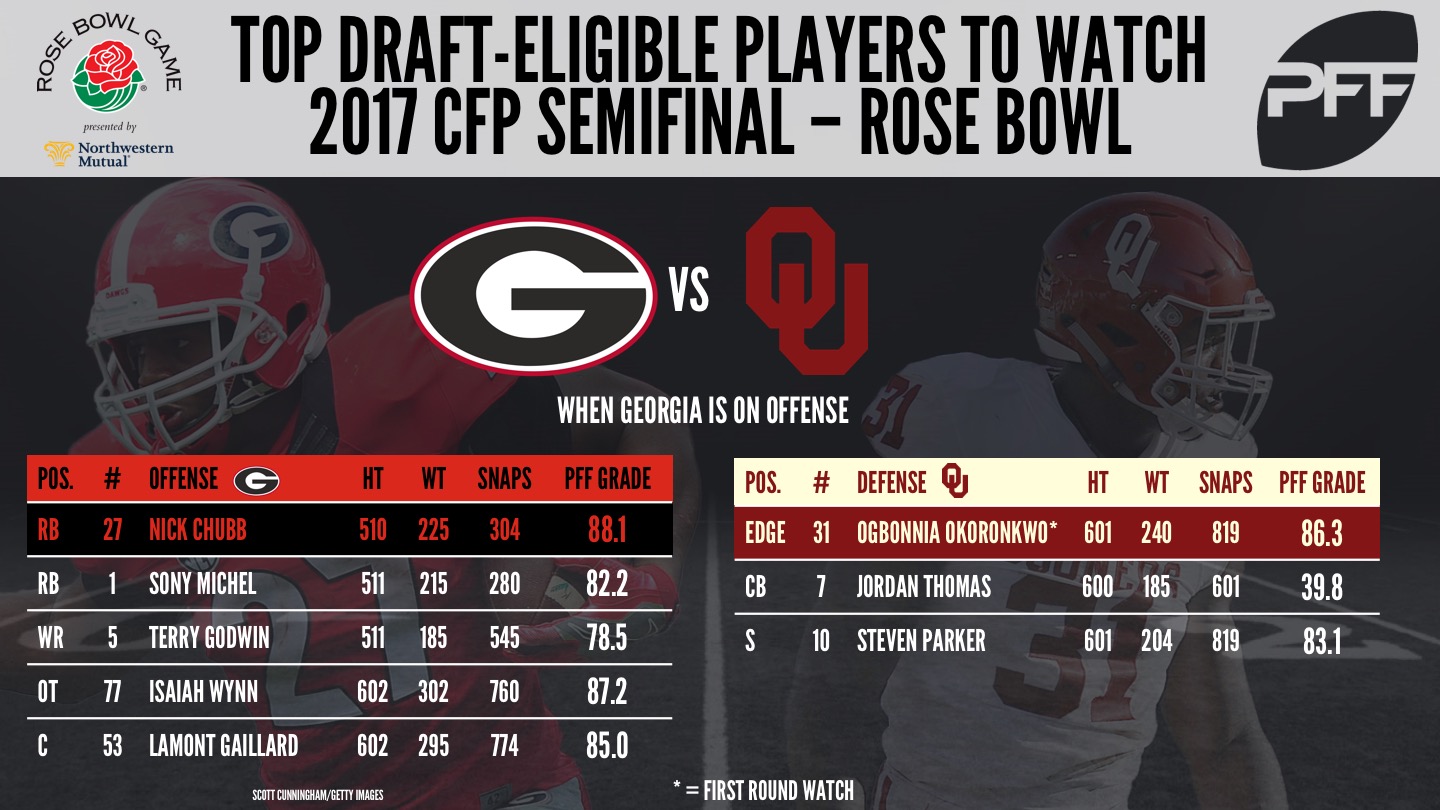 When Georgia is on offense:

Quarterback Jake Fromm has had a strong freshman season for the Bulldogs, but the running back duo of Nick Chubb and Sony Michel is the lifeblood of the Georgia offense. Chubb has forced 52 missed tackles on the ground this season, helping him rank fifth in elusiveness among draft-eligible backs. Michel is not far behind in the category at eighth, as he has forced 32 missed tackles on just 132 rushes. Michel has also been excellent in pass protection throughout his career, giving up just one sack and no quarterback hits on 150 total pass-blocking snaps.

Isaiah Wynn has played left tackle for Georgia this year, but in his prior two seasons as a starter in Athens, he played left guard, where he is likely to project to at the next level. Despite playing a new position this season, he allowed just five total quarterback pressures, and excelled on run blocks. His 89.9 grade in the category ranks second in the country at the tackle position, behind only Notre Dame’s Mike McGlinchey. 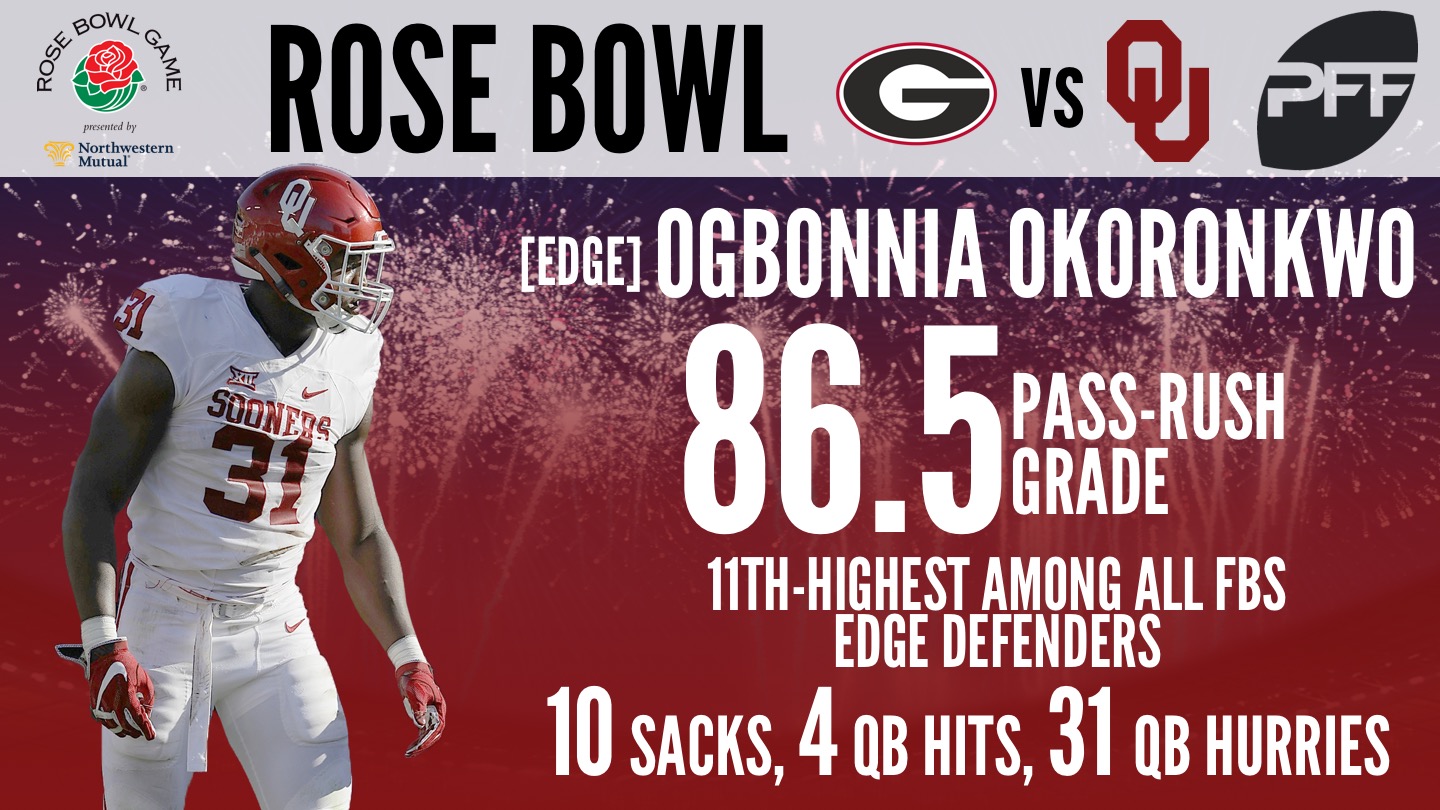 Edge defender Ogbonnia Okoronkwo has been one of the most consistent and productive players at his position this year, both on the pass-rush and in run defense. He has registered 10 sacks and 45 total quarterback pressures, and his 86.5 grade against the run ranks 11th among all edge players this year. A huge part of his high run grades has been his finishing ability, as his 26 run stops ties him for sixth among 3-4 outside linebackers eligible for the 2018 NFL draft. – @PFF_Josh

Wide receiver Terry Godwin has topped all receivers this season with his staggering 151.3 passer rating when targeting the junior. Godwin has hauled in 29-of-42 targets for 537 yards and six touchdowns, building a rapport with young quarterback Fromm despite dealing with a rib injury. He'll be tasked with going up against a talented secondary from Norman.

Jordan Thomas has struggled this season, giving up seven touchdowns, yet, despite the gaudy touchdown numbers allowed, he has either allowed no catches, or just one reception in 6-of-10 games this year, and seen a passer rating of 39.6 or lower in four contests. His 6-foot, 185-pound frame and ball skills he's put on display over his career (31 career plays on the ball, eight INT, 23 PBU) have kept him on NFL radars.

Safety Steven Parker has shown a nose for the football over his four years with the Sooners. He has recorded 66 career defensive stops, 18 total QB pressures and 13 total plays on the ball. For his career, he has allowed just 58.0 percent of passes thrown his way to be completed and graded positively in all four years. – @PFF_Cam