The best NFL quarterback at every throw and situation: 35 categories

[As a part of our partnership with ESPN, this is a part of a story that was originally published on ESPN+ and can be viewed in its entirety here with your ESPN+ subscription – The best NFL quarterback at every throw and situation: 35 categories]

After we dug deep into Pro Football Focus last week to evaluate the NFL's best at everything, we're back for an in-depth look at football's most important position. We have graded every throw from the first 11 weeks of the season to pick the best quarterbacks in 35 different categories. All stats are from our data set.

While it's getting close at the top of the rankings, Wilson is still our highest-graded signal-caller at 91.0 overall. It has been an incredible season for the 2012 third-round pick, who ranks second in big-time throw percentage — these are PFF's highest-graded pass attempts based upon ball placement, velocity, targeted depth and other factors — and first at avoiding turnover-worthy plays, an elite combination for quarterbacks. 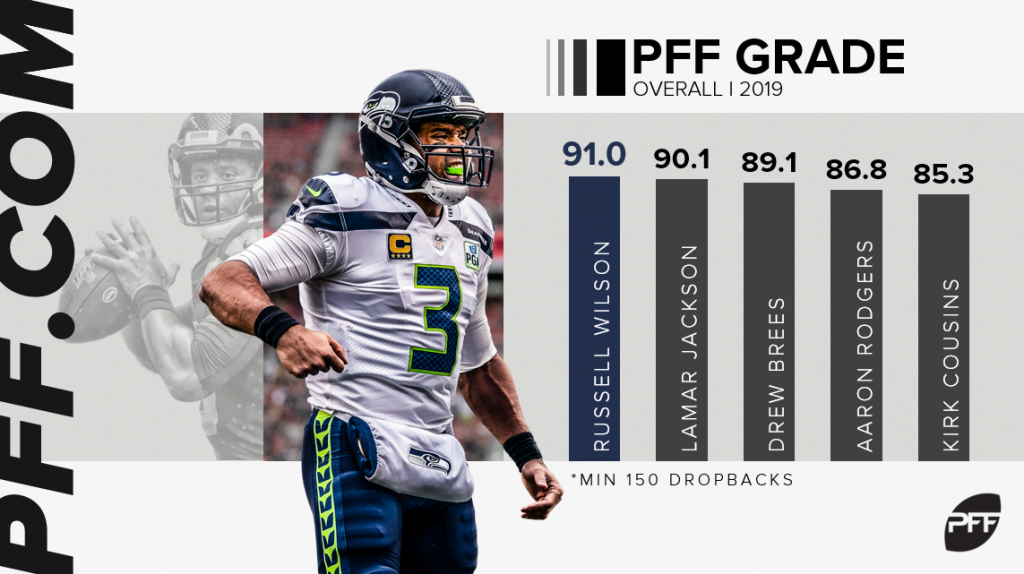 Best at throwing inside the numbers

Wilson and Stafford are tied for the best PFF grade on passes in between the numbers at 94.0. Stafford leads the league with 13 big-time throws on these passes, while Wilson ranks first in completion percentage (85.7%) and second in yards per attempt (10.7).

Best targeting outside the numbers

Rodgers leads the league with a 92.3 grade on throws outside the numbers, and he is tied for second with 16 big-time throws to go with only two turnover-worthy plays. His passer rating of 110.7 ranks fourth.

Best by route: Out

Since taking over as the starter for the Titans, Tannehill has had success on out-breaking routes, leading the way with a 92.5 grade and ranking fifth in yards per attempt (8.4). His best out route was a well-placed 20-yarder to Anthony Firkser in the comeback victory over the Chiefs.

Watson has completed 26 of 30 slant routes, and two of his four incompletions were dropped. That's good for a league-high 91.3 grade and an adjusted completion percentage of 93.3%.

Best by route: In

The in route can be targeted at various depths, but Dalton has specialized in the dig, as his average depth of target of 16.7 is the highest in the league this season. His 94.0 grade is best in the league, too. He has completed 18 of 20 in routes for 367 yards.

The hitch or curl can also be thrown at the short or intermediate level, and Ryan leads the way with a 91.0 grade and 10.9 yards per attempt while ranking fifth in passer rating (116.0).

Before going down for the season with a neck injury, Flacco had completed all 10 of his post attempts for 231 yards and a score.

The corner route and post corner are a vital part of the new offensive system in Detroit, and Stafford has seen a resurgence in his effectiveness on throws down the field. He leads the league in passing grade (95.2), yards (270) and big-time throws (six) on his seven completions of corner-route variations.

It has been an uneven season for the No. 1 overall pick in the 2016 draft, but Goff has five big-time throws on only 11 attempts at the go route, good for 189 yards and a league-high 93.2 grade.

The Vikings' play-action attack has opened up deep crossing routes, and Cousins has taken advantage with a league-best 94.5 grade and 649 yards. He has been incredibly efficient on all crossers, completing 34 of 38 throws, including one dropped pass.

Nothing sums up the rejuvenated Cowboys passing attack like Prescott going from 21st in passing grade on first-read throws (72.5) to best in the league so far this season (90.5). He ranks fourth with an adjusted completion percentage of 77.1% this season. 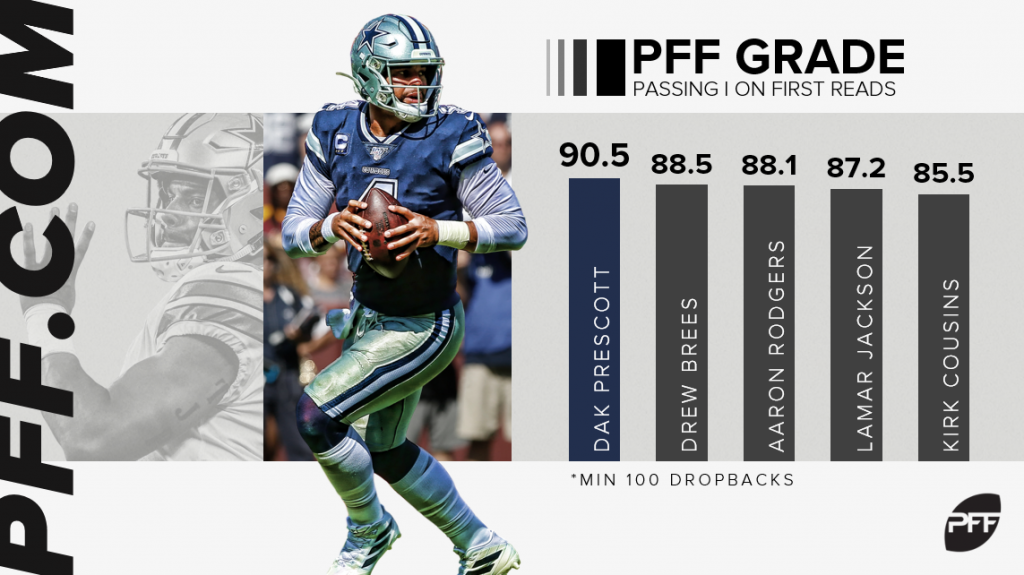 Most quarterbacks see a drop-off in performance when going to their second read, but Cousins has remained efficient, grading at 85.9 while ranking second in the league with an adjusted completion percentage of 86.2% on such attempts.

Stafford's huge arm has been put to good use this season — he's throwing the ball aggressively down the field more often than at any point in his career. It's showing up with a big-time throw rate of 7.2% to lead the league. (Big-time throws are PFF's highest-graded pass attempts based upon ball placement, velocity, targeted depth and other factors.)

Wilson has thrown only two interceptions, and that's a legitimate number based on our grading, as he has been the best in the league at avoiding turnover-worthy plays at only 1.4%. He has done a great job of avoiding poor fumbles in the pocket as well, which is a huge part of why he's one of the front-runners for MVP.

We all know about Wilson's highlight-worthy big-time throws, but his short-area efficiency has been a big part of his improvement this season. Wilson has the top grade in the league at 87.4, and he ranks sixth with an adjusted completion percentage of 88.1% on short throws.

Perhaps the most important part of the field to attack, the intermediate (10-19 yard) range has keyed Carr's bounce-back season as he leads the league in passing grade (92.9) and passer rating (136.9).

Wilson owns the short game and the deep game as he leads the league with a 97.3 grade on throws of 20-plus yards, including an incredible 20 big-time throws and zero turnover-worthy attempts.

Performance on tight-window throws is difficult to maintain from week to week, as the rankings are tight this season. Through Week 11, though, Rodgers is the best, grading at 65.5 while ranking second with nine big-time throws.

Best throwing to receivers with a step of separation

The most improved passer in the league this season, Jackson is getting the job done when his receivers have a step of separation. He has a league-high 96.3 passing grade and an adjusted completion percentage of 82.4%, which ranks fifth.

It should be no surprise to see Wilson sitting atop the list with a 94.4 passing grade, as he has 436 passing yards on scramble drills, 173 more than the closest quarterback.

Rodgers has separated himself in this department by targeting his running backs down the field, as he's 4-of-6 passing for 80 yards and two touchdowns on throws of 10-plus yards to his backs. He leads the league with a 79.2 grade on all throws to running backs.

Brady ranks second in the league with 129 attempts to the slot, and he has a grade of 93.0 and an adjusted completion percentage of 83%. He is tied for the league lead with nine touchdown passes on slot targets.

It certainly helps to have a great duo in Stefon Diggs and Adam Thielen, and Cousins has made the most of his outside receivers, leading the way with a 92.3 grade, passer rating of 124.4 and 15 big-time throws.

The Ravens have made it a point to invest in the tight end position, and Jackson is taking advantage with a 92.5 grade when throwing to inline tight ends. His passer rating of 139.6 this season ranks fourth in the league.

Using actual pass location to determine accurate passes, Brees leads this category for the second year in a row. More than just throwing a “catchable” attempt, accuracy percentage is all about giving receivers the best opportunity to make a catch on their frame or in optimum catch-and-run positions, and Brees is always battling Brady for supremacy here.

Brady leads the way in “accuracy+” or “perfect” passes by our grading. Whether leading receivers away from the leverage of defenders or hitting them in stride to optimize yards after the catch, Brady is annually the league's best, and he's pacing the NFL once again, even in a down season.

Jackson has been excellent in the quick game, making sharp decisions while firing accurately and on time. He has the NFL's top grade (89.1) and passer rating (128.2) on three-step drops.

Wilson leads the league with an 84.2 grade on five-step concepts, matching his proficiency on all throws in the 10-plus-yards range.

While the Raiders don't work the seven-step game often, Carr has been fantastic, posting a league-high grade of 95.5. He ranks third with a passer rating of 131.9 to go with a league-high adjusted completion percentage of 85.7%.

The Gary Kubiak influence is evident in Minnesota, where the play-action game has been the league's best in 2019. Cousins has the highest grade (91.4) while also leading the league with 1,052 yards and 12 touchdown passes.

Rodgers leads the league in passing grade (87.0) and touchdowns (16) on non-play-action passes. He ranks second with 19 big-time throws on these plays.

It's difficult to stop Brees when he's getting the ball out of his hands quickly, and this season is no different, as he leads the league with an 87.6 grade and an adjusted completion percentage of 87.2% on throws within 2.5 seconds of the snap.

Much like the scramble drill section, Wilson is as dangerous as it gets in the league when either given time to throw or extending the play. His 91.0 grade on balls thrown 2.6 seconds or more from the snap leads the NFL this season.

Another category that connects Cousins and the Minnesota play-action attack. Cousins has been fantastic on bootlegs, pacing the league with an 85.7 grade and throwing for a league-high 445 yards and seven touchdowns on designed rollouts outside the pocket.