The Miami Dolphins defeated the New York Jets 20-12, continuing the second full week of action in the NFL. 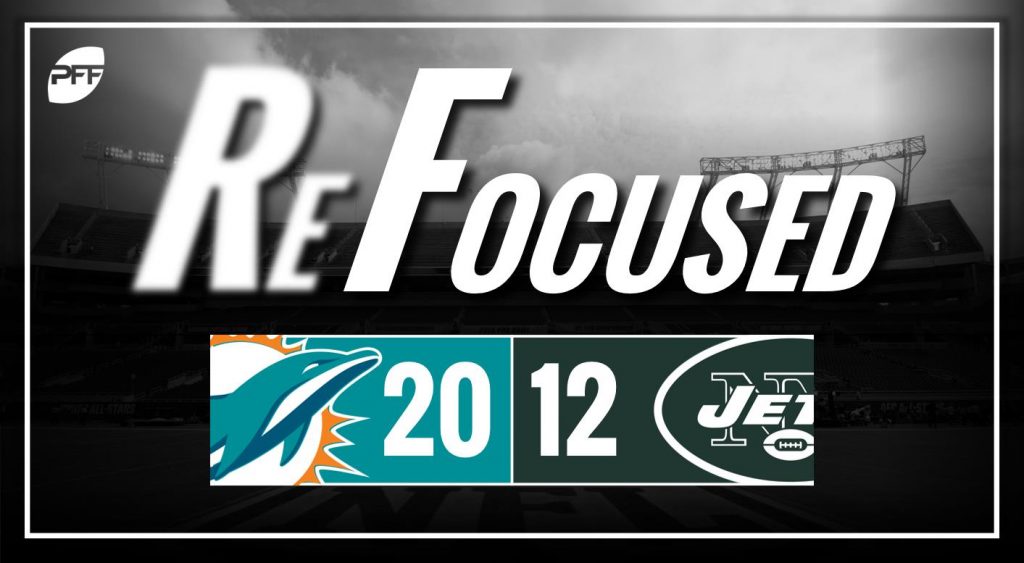 Akeem Spence and Davon Godchaux were problems for the interior of the Jets' offensive line from start to finish, particularly in the run game. Spence and Godchaux were big contributors for a Dolphins front seven that largely bottled up the ground game.

Ryan Tannehill was able to lead his team to victory, but it wasn't a great day for him. He was able to execute short, quick passes in an RPO-heavy offense against the Jets, but his accuracy on throws in the intermediate and deeper areas of the field wasn't particularly sharp. The veteran signal-caller also coughed up two fumbles on the afternoon with the Dolphins' offense recovering the first and the Miami defense making people forget quickly about the second after answering with an interception on the Jets' first play following.

First-round pick Minkah Fitzpatrick turned in a solid day, highlighted by a tackle for loss on a screen pass in the second quarter and close coverage downfield on a shot to Robby Anderson in the end zone on the Jets' final possession.

The Dolphins went heavy with RPOs and read options in this game, and they succeeded at keeping the Jets' defense off balance. Despite his struggles in the passing game, Tannehill made some great decisions with the read option, keeping the ball a handful of times and picking up a good chunk of yardage whenever he did, including an eight-yard pickup on third-and-six right before the two-minute warning to put the Jets away for good. Miami didn't have a ton of chunk plays in this one, but they did a nice job at staying on schedule, chipping away at New York's defense.

The box score numbers will look better than rookie Sam Darnold was in this game. Accuracy was an issue for the former Trojan, as was decision making at times, including a bad misread of coverage in the first quarter on a slant pass to Quincy Enunwa that was jumped and picked off by T.J. McDonald.

It was a struggle for the interior of New York's offensive line in this one. The trio of James Carpenter, Spencer Long and Brian Winters had a tough time handling the Dolphins' defensive interior in the run game, leading to the Jets averaging just 2.2 yards per carry on the ground. And while they didn't surrender a bunch of sacks, they consistently allowed the interior of the pocket to be pushed back, constricting the space their rookie quarterback had to operate.

Leonard Williams once again demonstrated that he is a top-flight interior defender in the NFL. Williams was a terror among the Dolphins' offensive line in Week 2, lining up in multiple spots and often winning against whomever he was matched up against. Williams was especially effective against the run, using his quicks and his strength to quickly shed offensive blockers in pursuit of the ball.

The Jets shot themselves in the foot twice in this game with a couple of third-down sacks that resulted in Miami first downs due to holding calls in the secondary. The first came at the end of the second quarter when the Dolphins were driving with under two minutes to go; Williams and Avery Williamson were both able to get into the pocket to take Tannehill down, setting up a theoretical long field goal attempt. Morris Claiborne, however, committed a hold on the play, which allowed Miami to extend the drive, ultimately capping it off with their third touchdown of the half. The second instance came late in the third quarter when a Brandon Copeland sack was nullified by a Buster Skrine holding call. Fortunately for the Jets, they were able to take advantage of a fumbled snap a couple of plays later.

The Dolphins were able to take advantage of some good field position early on to take themselves to a lead that was too much for the Jets to overcome. Despite his struggles, Tannehill was able to orchestrate an effective ground attack in the second half to stave off the New York comeback attempt.