Highlighting the seven NFL quarterbacks projected to go over 4,200 passing yards in 2019

Below, we’ve highlighted the seven NFL quarterbacks projected to go over 4,200 passing yards in 2019.

Rivers had quite the resurgence in 2018, earning an impressive 87.4 passing grade that ranked fifth among qualifying signal-callers this past season and stands as the fourth-best single-season mark of his career. He also finished the year tied for seventh in big-time throw percentage (5.75%) and eighth in clean-pocket passing grade (90.4).

If he can get even moderate improvement from his offensive line in 2019, Rivers should see his production jump from his 4,306 passing yards a year ago. Keeping Rivers clean at a higher rate will allow him to take full advantage of Keenan Allen, Mike Williams and (ideally a healthy) Hunter Henry. Rivers' current projection for the 2019 season is 4,523.0 passing yards, 28.8 touchdowns and 11.8 interceptions. 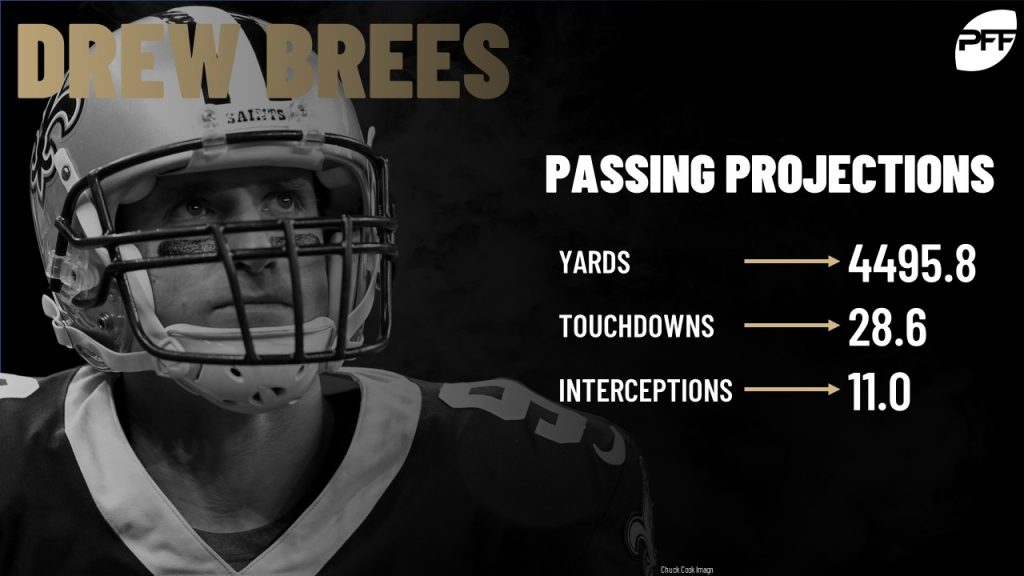 Tried and true, Brees has earned 81.0-plus passing grades every single season in the PFF era (2006-18) and is now coming off a career-best 93.6 passing grade in 2018. While he ranked just 11th in big-time throw percentage (5.29%), his 2.03% turnover-worthy play percentage ranked inside the top-six among qualifiers. His clean-pocket passing grade (95.1) also led all at the quarterback position, as did his clean-pocket adjusted completion percentage (83.4%).

Brees is a first-ballot Hall of Famer with one of the best wide receivers in football (Michael Thomas) at his disposal. Throw that into the mix with his above-average offensive line, and you have a recipe for quite the season from Brees in 2019. He is currently projected to pass for 4,495.8 yards, 28.6 touchdowns and 11.0 interceptions.

A candidate we at PFF are high on to punch above his weight and steal the passing yards title in 2019, Winston has every reason to have a breakout campaign this upcoming season.

“Last year [Winston] trailed only Josh Allen in average depth of target. These throws put Winston in a position to do great things at times (he was second among quarterbacks in the percentage of throws we grade as “positive”), as well as bad things (he was 21st in limiting negatively-graded throws). New Bucs head coach Bruce Arians has a track record of succeeding with high-variance quarterbacks like Winston.  In 2015 Carson Palmer had an MVP-caliber season under Arians, posting roughly the same average depth of target as Winston in 2018 and leading the league in percentage of positively-graded throws.  With Mike Evans, Chris Godwin and O.J. Howard a very capable trio of pass catchers, look for Winston to either make good on his 2015 draft position or give the Bucs no other option but to find his replacement the following year.”