With Gerald McCoy out of town, the Tampa Bay Buccaneers will lean on Lavonte David more than ever

Through seven seasons with the Tampa Bay Buccaneers, linebacker Lavonte David has seen the kingdom crumbled and rebuilt. The Bucs have had as much defensive turnover as any team in the league, and now after the departure of interior defensive lineman Gerald McCoy, they’ll lean on David more than ever.

David has led the Buccaneers in tackles in six of his seven seasons, but more importantly, he has led the team in defensive stops in those same years.

Not only has David led the Buccaneers in total stops, but he's also led all players at the position. From 2012-2018, David ranks first among all NFL linebackers with 439 stops, edging out top-tier players such as Luke Kuechly (422) and Bobby Wagner (367). David has also led his positional peers with 141 tackles for loss or no gain over that same period. 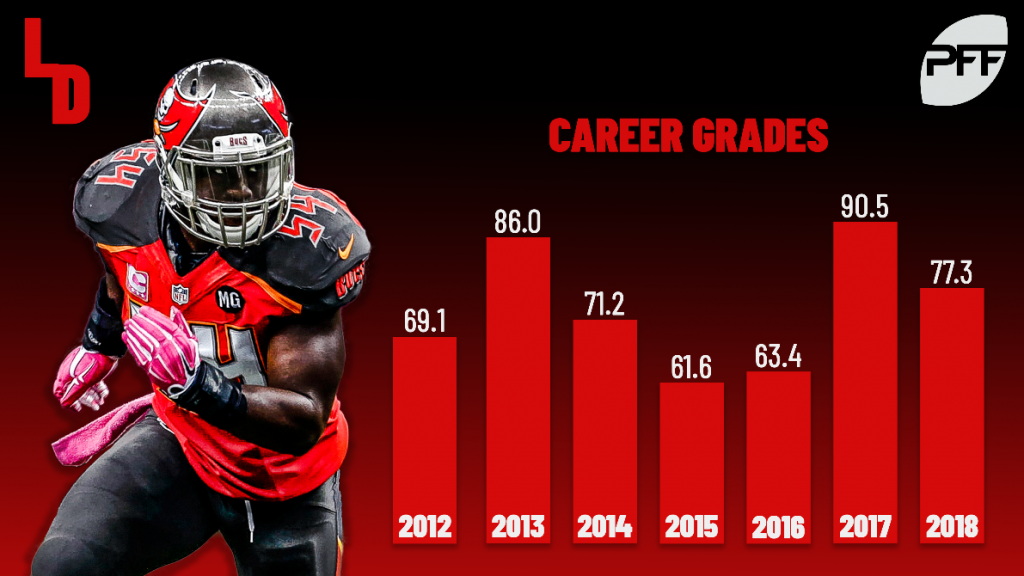 That stopping power was on full display against the run last year. David saw 348 run-defense snaps and secured 33 run stops in 2018, earning a run-stop percentage of 9.4% that ranked 13th among the 94 linebackers with at least 100 run-defense snaps. He also recorded a run-defense grade of 72.5 that ranked 25th at his position.

However, gone are the days of the one trick pony: David has adapted to the NFL’s modern style of linebacker play a-la Deion Jones and has also been one of the league’s best coverage linebackers. Over the last two years, only Demario Davis and (47) and Blake Martinez (43) have produced more coverage stops than David's 42, while David's 88.5 coverage grade ranks third among the 109 linebackers with at least 200 coverage snaps since 2017. 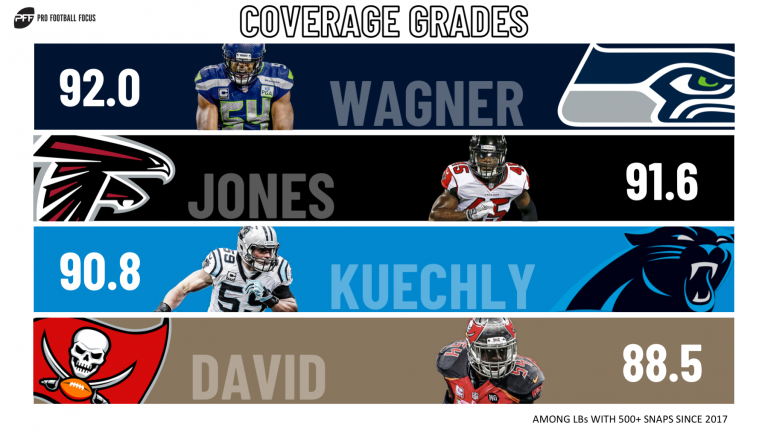 Tampa Bay addressed the defensive side of the ball with their first five picks in the 2019 NFL Draft, honing in on improving a defense that earned a 62.6 team grade last season, 30th in the league. Their fifth pick, LSU linebacker Devin White, will play opposite David, complementing his playstyle nicely and adding a pass-rushing presence to the linebacking corps.

White produced a staggering 70 total pressures on 188 pass-rush snaps in his final two collegiate seasons, and he fits Arians’ scheme perfectly, as B.A. sent linebackers on blitzes at the third-highest rate in the NFL during his previous five years as a head coach (861 times).

However, the offseason addition that David should be most excited about is that of fellow former Nebraska Cornhusker Ndamukong Suh. Replacing the departed McCoy, the Buccaneers receive a veteran interior defensive lineman who ranked inside the top 12 at this position in defensive stops and quarterback pressures last season.

Tampa Bay fans will see nameplates they haven’t seen before in the red and pewter come August and September, but the one constant will remain in the middle of the field is Lavonte David. And with all the question marks surrounding the team at the moment, the Bucs faithful need another great season from their veteran linebacker.