Why Seattle is the NFL's best at the zone read

[Editor’s note: This is the fifth installment in Senior Analyst Mike Renner’s “Teaching Tape” article series, which takes a look at the best positional units across the NFL.]

Articles breaking down the zone read are so 2013 by now—I get it. Even the most casual of fan can tell you how the play is run. That doesn’t mean, though, that there is a play called the “inside zone read” that is copied and pasted in every playbook around the league. Carolina’s is different from Tennessee’s, which is different from Philadelphia’s, and so on.

When it comes to effectiveness however, no one runs it with the volume and efficiency of the Seattle Seahawks. Their 128 attempts were the second-most in the league, and they averaged 5.27 yards on those carries (league average on the zone read was 4.33). On their 324 other designed runs, the Seahawks averaged a paltry 4.22 yards per carry. So, how does a team go from an average rushing squad to one of the best in the league on the backs of a single run play? Let’s take a look in this week’s installment in the “Teaching Tape” series.

The Seahawks' offensive line, more than any I’ve seen, doesn’t really seem to care if it can sustain blocks. When you hear analysts say that offensive line coach Tom Cable couldn’t care less about technique coming out of college and simply wants athletes to work with, this is why. It doesn’t take a great offensive line (and the Seahawks definitely do not have one) to be successful. That’s the beauty of the play. 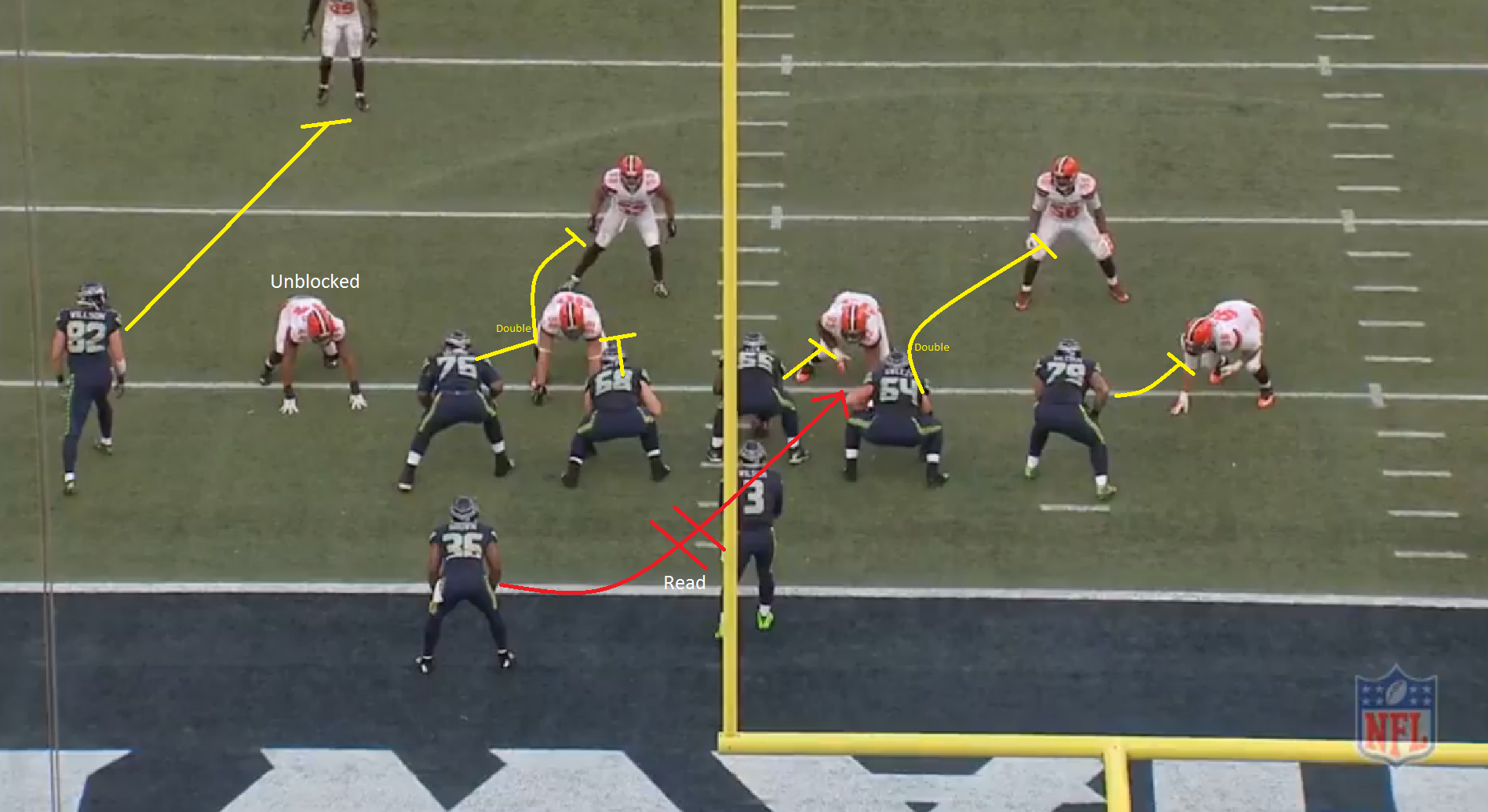 The key is generating movement. Because a player is unblocked to the backside, every lineman can work from a favorable shade and you can also sneak in an extra double-team, if need be. A majority of formations the Seahawks see will elicit double-teams on both defensive tackles. What this does is puts the onus on the linebackers to finish plays.

Against the over-front seen below, most teams would have the right guard move to the second level as swiftly as possible. Not Seattle. The Seahawks hit the nose tackle hard here, making sure he won’t be the one making the tackle. The offensive linemen all stick on their double teams until a linebacker starts crossing their threshold. That movement along the line of scrimmage creates a chain reaction throughout the defense.

The linebackers are immediately placed on an island. If the defensive tackles are taken out of their gap, there is the possibility that the linebackers will have to cover multiple gaps, and in doing so, can’t simply come down to fill their hole. The result is a ton of space for the running back to work with and a linebacker who is unable to effectively play his gap. Obviously there can be a downside to focusing purely on athletes that can generate movement. The Seahawks O-line, more than any other, has some ugly whiffs that can completely blow up runs before they start.

While movement on play-side blocks is a plus, the back-side is where the majority of their explosive runs are created. Almost every team defends the option with the squeeze method from the unblocked defender. Basically, he is asked to squeeze down and play his gap versus any handoff, while also being able to react quickly and take down a quarterback on any keeper. This is what it looks like when executed perfectly.

The problem becomes when that triangle between the mesh point, the unblocked defender, and the back-side down-block grows instead of shrinks. If the backside guard/tackle can really wash down the line of scrimmage or up into the linebackers, the unblocked defender has no chance of defending a handoff in his gap. 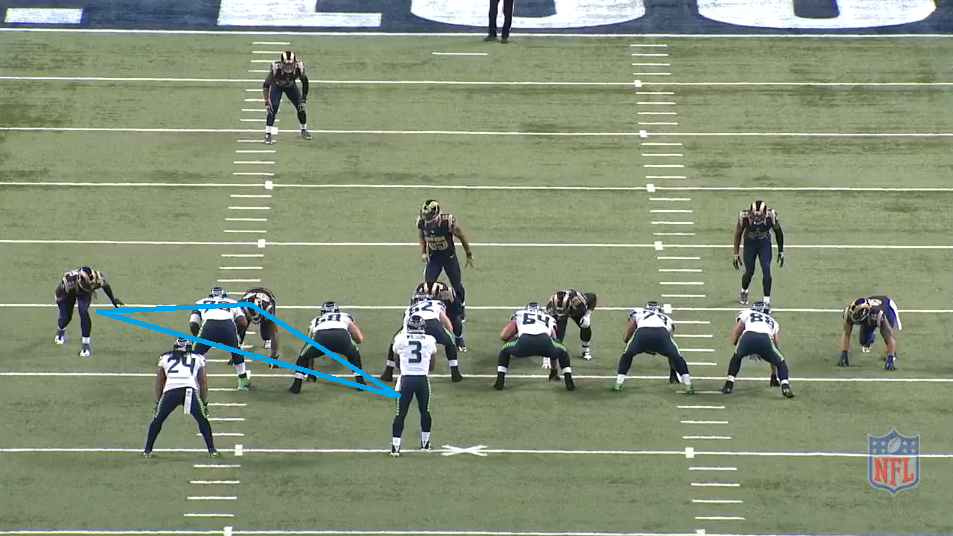 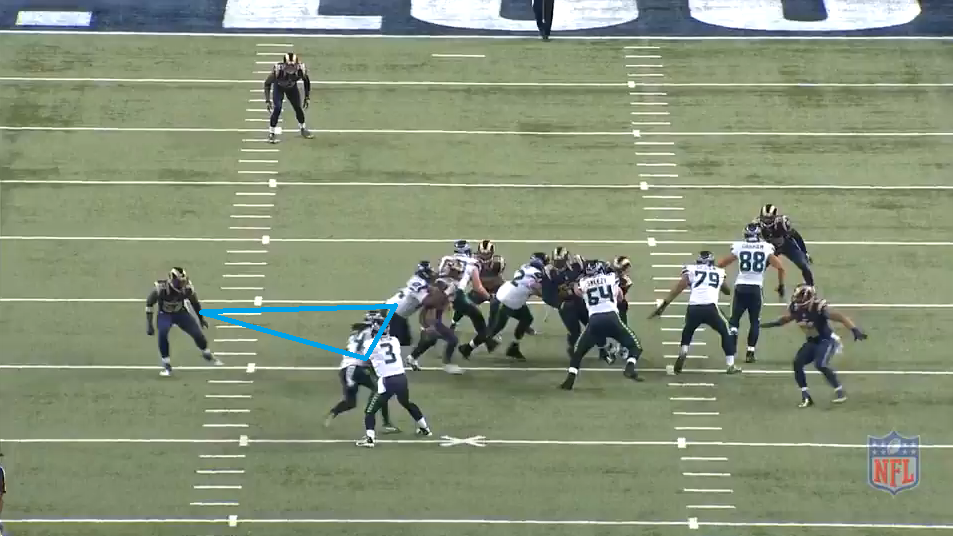 What makes it all work, though—and the reason why the unblocked man can’t come all the way down—is the man we haven’t mentioned yet: Russell Wilson. The athleticism of the Seahawks quarterback is on par with NFL running backs. This gives Seattle the running versatility of the all but defunct “wildcat” without tipping their hand with the formation. If at any point the unblocked defender commits to the running back or gives up too much ground laterally, Wilson will pull it. And now that gap that should have been occupied by the edge man is completely unaccounted for.

This one play is how the Seahawks can get away with spending less than $10 million in cap space on their offensive line this upcoming season. I think by now we’ve all come to realize that the zone read is far, far from a fad. It’s an ingenious way to get an advantageous running look—and no one employs it better than Seattle.