Week 14 NFL Team of the Week 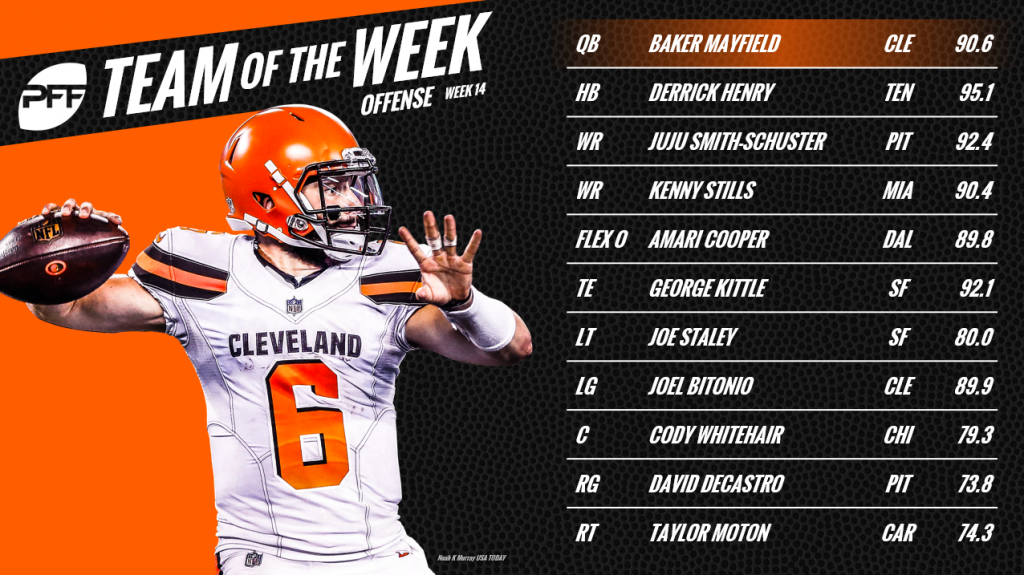 Mayfield has been fantastic as a rookie, and he delivered his finest performance to date in the win over the Panthers. Going 18-for-22, Mayfield saw three passes dropped by his receivers meaning that he had just one true incompletion. He also delivered multiple highlight reel throws, including a perfect touchdown pass to Jarvis Landry where he moved to his left before delivering the ball exactly where it needed to be.

After running all over the Jacksonville Jaguars on Thursday Night Football, it’s no surprise that Henry makes the PFF Team of the Week. Henry rushed for 238 yards, with 226 of those coming after contact, he also forced nine missed tackles and found the end zone four times, including that 99-yard run.

Smith-Schuster ranked fifth among wide receivers this week with an average of 3.42 yards per route run from 38 passing plays on the field, hauling in eight receptions for 130 yards. It was the nature of some of his receptions that really stood out though, including an epic toe-tapper in the back of the end zone for a touchdown.

Stills has had a season where he has shown flashes and lacked consistency, but he delivered by far his best game of the year in Sunday’s win over the Patriots. Stills caught eight of the nine passes thrown his way for 135 yards and a touchdown, including the reception on what would become the Miami Miracle.

Kittle is a monster in the open field, and he made the Broncos pay with his ability to find big plays after the catch in their win over the Broncos. He hauled in seven receptions for 210 yards, averaging 7.78 yards per route run, with all of those yards coming in a huge first half.

Cooper has been a revelation since arriving in Dallas, helping jump-start their season and put them in the driver’s seat in the NFC East. Cooper averaged 3.88 yards per route run, led all wide receivers with 217 receiving yards, and scored three touchdowns in the win over the Eagles.

The 49ers dropped back to pass 41 times in Sunday’s win over the Denver Broncos, and from those 41 pass-blocking snaps, Staley allowed just one quarterback hit. That makes it the ninth game this season where Staley has allowed two or fewer total pressures. He also had a reception, coming off a batted pass, that he was pretty excited about, but that didn’t factor into his spot on the Team of the Week.

Bitonio was one of the best players on the field in the Browns' win over the Panthers, producing a pass-blocking efficiency rating of 100.0 with no pressures allowed from 31 pass-blocking snaps. Adding some impressive plays in the running game, Bitonio delivered the highest graded performance along the offensive line of any player in the league this week.

The fact that Whitehair is our highest graded center this week is one thing, but the fact that he did it against a dominant Rams defensive front is another. He was impressive as a run-blocker and allowed just one hurry from 35 pass-blocking snaps.

DeCastro didn’t have a great day as a run blocker, but he was dominant in pass protection. He produced a perfect 100.0 pass-blocking efficiency rating, with no sacks, hits or hurries allowed from 42 pass-blocking snaps.

From 50 pass-blocking snaps in their loss to the Cleveland Browns, Moton allowed just two hurries. It was a performance that was far from perfect, and he had some struggles in the run game, but so far this week it’s the best we’ve seen on the right side of the line. 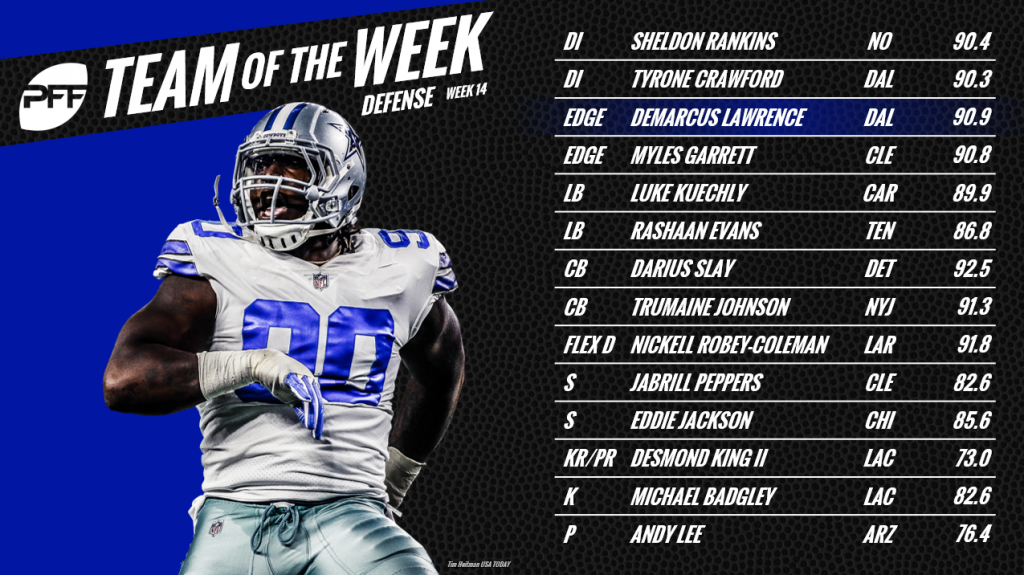 Lawrence has really hit form lately and delivered his second straight game with a PFF grade of 90.0 or above in the Cowboys' win over the Eagles. From 33 pass-rushing snaps, he racked up a hit and four hurries, and he also added three other defensive stops.

Rankins has come on strong lately but even by recent standards this was something special, as he produced his highest graded game of the season so far. He tied his season high of seven total pressures, with a sack, two hits and four hurries from 30 pass-rushing snaps in the win over the Buccaneers.

Crawford produced his best performance of the season for the Cowboys in their huge NFC East win over the Eagles, registering a sack and three hurries from 31 pass-rushing snaps. Adding a forced fumble, he made sure to make an impact as Dallas tightened their grip on the NFC East.

The Browns are still alive in the AFC North and Wild Card races, but looking beyond this season, the performances we saw from the number one overall selections in the past two drafts should have Browns fans excited for the future. Joining Mayfield on the Team of the Week, Myles Garrett racked up a sack, two hits and four hurries from 38 pass-rushing snaps, adding another two tackles resulting in a defensive stop.

It’s two weeks in a row for Kuechly on the PFF Team of the Week, proving that he is still performing at a high level despite the Panthers' continued losing streak. Kuechly allowed just 20 yards on four receptions and finished the day with six defensive stops.

Evans struggled early in his rookie season, but has looked every bit the first round draft pick in the past two games for the Titans. Against the Jaguars on Thursday Night Football, he allowed just three receiving yards on two receptions, with three of his four tackles resulting in a defensive stop. After missing three tackles in his first four games, he has now missed just one since Week 7.

“Big-Play Slay” was at it again, getting his hands on as many passes as receptions allowed (3). Those three receptions went for just 31 yards, with Slay coming away with two pass breakups and an interception that he took back the other way for a touchdown. On the day, he allowed an NFL passer rating of just 4.6 on throws into his coverage.

Johnson made life miserable for Bills quarterback Josh Allen, allowing just one reception for 12 yards from 51 snaps in coverage. More impressively, he came away with two interceptions and finished the game having allowed an NFL passer rating of just 6.9 on throws into his coverage.

The third former first-round draft pick from the Browns to make the Team of the Week this week, Peppers allowed just one reception on plays where he was the primary defender in coverage, going for just three yards. It was his second-highest graded performance of what has been a solid second season in the NFL.

Jackson is the very definition of the term ball-hawk and came away with another interception in the Bears big win over the Rams on Sunday Night Football. Targeted five times, he allowed just one reception for zero yards, had two pass breakups and allowed an NFL passer rating of 0.0.

Robey-Coleman was targeted six times in the Rams loss to the Bears, giving up just one reception for eight yards. He broke up one pass and intercepted another, allowing an NFL passer rating of 0.0 on throws into his coverage.

The Chargers kicker connected on all four of his field goal attempts, including one from a whopping 62 (SIXTY TWO!) yards out.

Lee punted six times in the Cardinals loss to the Detroit Lions, surrendering just eight return yards over the course of the game. Four of his punts landed inside the Lions' 20-yard line, with Lee averaging 45.2 net yards per kick.

It has been a quiet week for returners so far, but King boosted the Chargers field position to begin drives with kick returns of 35 and 31 yards in their win over the Bengals.