When the Minnesota Vikings added George Iloka last August, it appeared Anthony Harris was destined for another season of special teams, buried on the safety depth chart.

A Week 5 groin injury to Andrew Sendejo earned Harris a spot in the defensive rotation, and a 44-yard touchdown catch by New Orleans Saints wide receiver Michael Thomas in Week 8 would be the last defensive snap the Vikings played last season without Harris on the field. Iloka took his spot on the bench, and the former undrafted free agent out of Virginia became one of the breakout stars of 2018.

Harris led the NFL with a passer rating allowed of just 24.0, targeted just 13 times on 340 coverage snaps. He gave up only seven catches for 52 yards with no touchdowns, three interceptions and two pass breakups in 11 games. His 0.16 yards allowed per coverage snap was second among safeties with more than two catches given up, and he missed only two tackles over the season, good for a top-six tackling efficiency at his position. 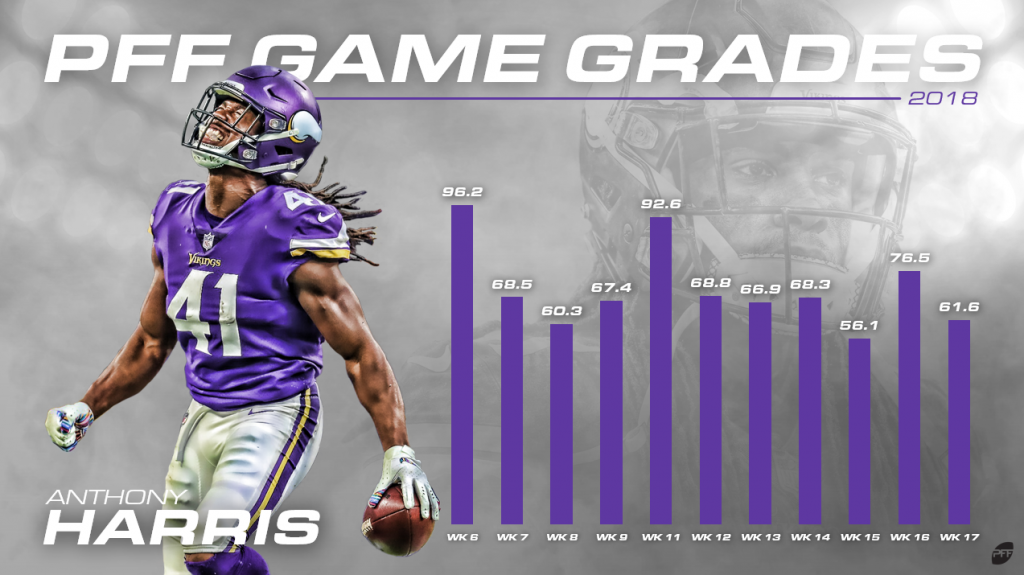 Harris started to emerge in his first action off the bench, recording his first interception in just six coverage snaps against the Arizona Cardinals, but his signature performance came against the Chicago Bears in a Week 11 loss. He intercepted Mitchell Trubisky twice and added a pass breakup for good measure, despite only one target being thrown at his actual coverage responsibility.

The injury to Sendejo and eventual transition to Harris corresponded with a shift in play-calling from Mike Zimmer. Over the first four weeks of the season, with the veteran in the lineup, the Vikings ran two-deep coverages on just under a third of their passing snaps. From Week 5 on, Zimmer switched to over half of his coverages featuring two-deep safeties. It didn’t appear to be ideal for Iloka, but Harris stepped in and thrived.

He hadn’t played more than 250 defensive snaps in any of his first three seasons in Minnesota, filling in the starting lineup sparingly when Sendejo and Harrison Smith recovered from minor injuries. Harris flashed high-level safety play in his last start of 2017 against the Los Angeles Rams with a forced fumble and a pass breakup, and he’s only allowed one touchdown in his 711 career coverage snaps.

Harris’ half-season heroics earned the Vikings' trust for 2019 and a second-round restricted free agent tender asking him to prove it for a full season. The team let Sendejo and Iloka sign elsewhere this offseason, and currently, no one else on their depth chart has meaningful NFL experience at safety.

Minnesota doesn’t need Harris to play like a top-five safety, but he has to help stabilize the side's secondary once again to cash in and rewrite the story of his NFL career.