In an NFL that's constantly coming up with new ways of picking apart defenses, having a quarterback that can make accurate and sometimes game-changing throws to all regions of the field is essential to a team's success. It's no use having a signal-caller that can connect with the rare 70-yard bomb but will overthrow a simple bubble screen, just as it is useless to have a quarterback that can hit three-yard crossers but will struggle to find anyone more than 15 yards downfield. That's why looking at a quarterback's performance by each section of the field is a vital resource in the evaluation process.

At PFF, we chart virtually everything that occurs on an NFL football field, which means that we have an expansive database filled with all sorts of information that cannot be found anywhere else. Today we’re going to take a deep dive into our quarterback data and take a look at the league's best quarterbacks not only by the range of attempt (short, intermediate and deep) but by field section (outside the numbers and over the middle of the field).

[Editor’s Note: To view more of Pro Football Focus’ advanced stats on passing directions, check out our Premium Stats 2.0. All ELITE subscribers already have access to these stats, and for those who don’t, you can subscribe today!] 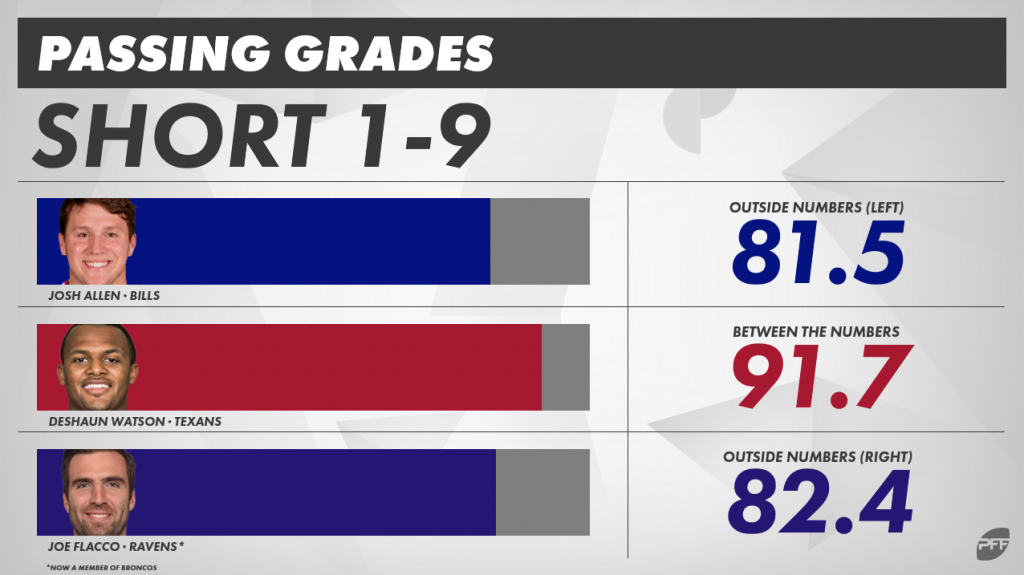 One of Allen's strongest areas as a rookie was outside the left numbers to the short range of the field. Last year, the former Wyoming signal-caller completed 21-of-24 attempts there for 129 yards and one touchdown, and one of those three incompletions was the result of a drop by his receiver. His adjusted completion percentage of 91.7% on these throws ranked second among quarterbacks with at least 20 attempts, while his positively-graded throw rate of 29.2% ranked first.

To say that Watson was good on his short throws over the middle of the field would be an understatement. Last season, the second-year signal-caller completed 102 of his 124 short pass attempts across the middle, and he compiled 1033 yards and seven touchdowns while doing so. He ranked first among quarterbacks with at least 25 attempts in positively-graded throw rate (29.4%), and he ended the year with a passing grade of 91.7 to this section of the filed, which is tied for the third-best single-season mark that we've ever given to a quarterback.

Flacco's tenure with the Ravens may have ended a little differently than he had hoped, but there is no question that he'll bring his smarts and experience with him to Denver. A season ago, Flacco was the league's best at throwing outside the right numbers to the short range of the field, as he completed 31-of-39 attempts for 205 passing yards and three touchdowns on the year. His 89.7% adjusted completion percentage tied for second among quarterbacks with at least 25 attempts there, his 114.2 passer rating ranked sixth, and only Baker Mayfield (22.9%) and Patrick Mahomes (22.2%) recorded a better positively-graded throw rate than Flacco's mark of 19.5%. 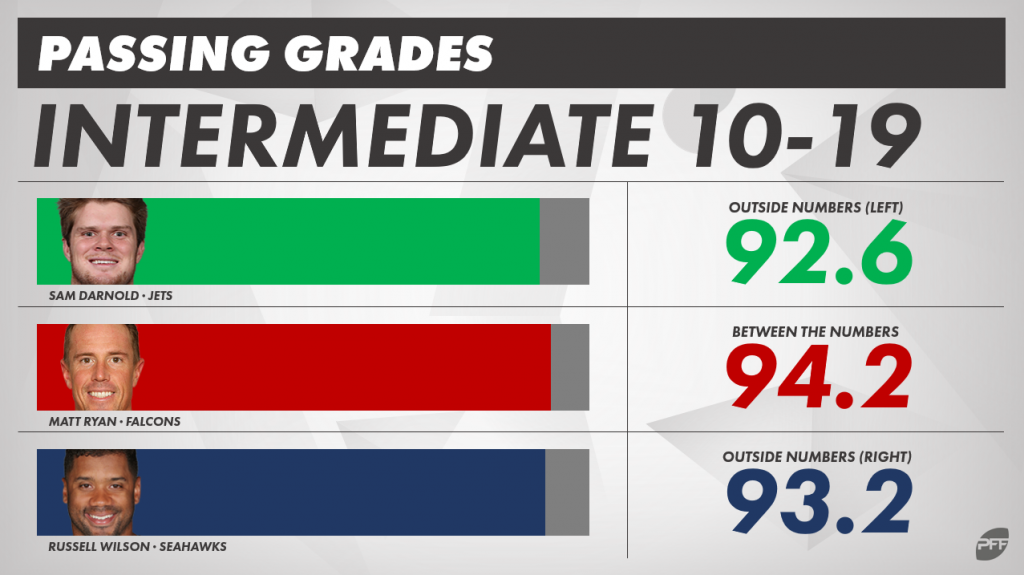 Over the last three years, no quarterback has earned a higher passing grade than Matt Ryan on throws between the numbers, so it comes as no surprise to see him rank first among quarterbacks here. Last season, the former MVP completed 53 of his 77 intermediate attempts that were targeted between the numbers, and he racked up 883 yards, seven touchdowns, and just one interception while doing so. Through 16 regular-season games, 73.1% of Ryan's intermediate throws between the numbers were positively graded, while he also avoided negatively-graded throws at the league's second-best rate (9.0%). 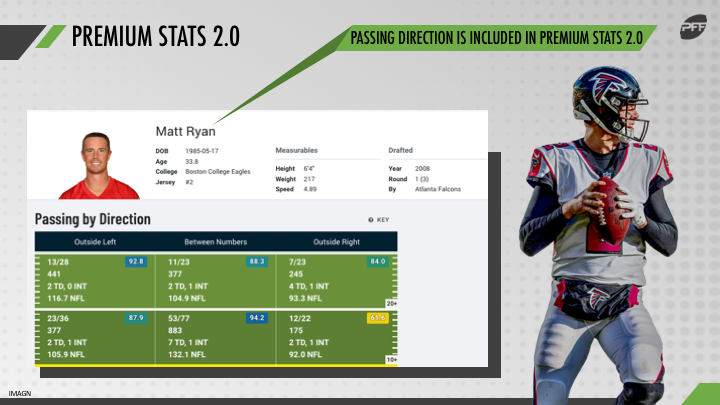 As one of the league's best at the position, it shouldn't shock you to see that Wilson dominated on intermediate throws that were targeted outside the right numbers. Over the last 13 seasons, quarterbacks have combined for a completion percentage of only 51.0% and a passer rating of just 81.8 on these throws, making it the least successful throw of the intermediate range, but it just so happens that Wilson has made a career out of defying the norms. Last season, the Seattle signal-caller completed 18-of-28 attempts for 322 yards and five touchdowns on these throws, finishing fifth among quarterbacks in completion percentage (64.3%), second in passer rating (143.2), but first in passing grade (93.2).

Deep range of the field (20-plus yards downfield) 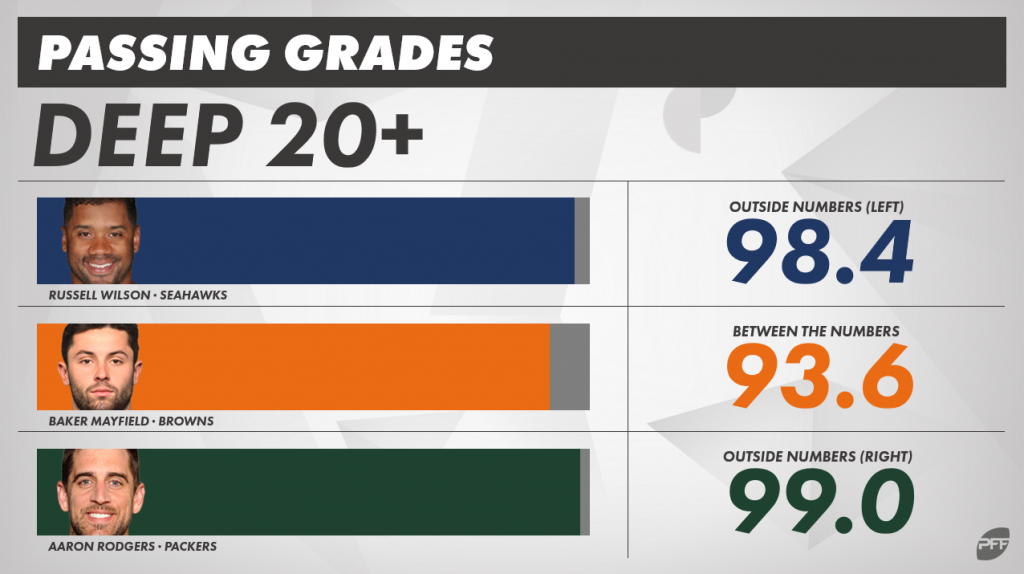 Russell Wilson's name appears three times on the list of the top-10 single-season passing grades from deep throws targeted outside the left numbers, with his latest effort (98.4) being the fourth-best single-season mark ever recorded. Last year, Wilson completed 19-of-39 attempts for 690 yards, six touchdowns, and one interception on such throws and he led the league with a staggering 15:0 big-time throw to turnover-worthy play ratio.

The first overall pick of the 2018 NFL Draft was lethal between the numbers on his deep throws, as he completed 13-of-24 attempts for 490 yards, five touchdowns, and two interceptions. On these throws, Mayfield led the league in positively-graded throw rate (60.0%), while he managed to avoid negatively-graded throws at the league's fourth-best rate (28.0%).

Exactly 10 years after he ended the season with a perfect 99.9 passing grade on his deep throws outside the right numbers, Aaron Rodgers tops the list again, this time with a grade of 99.0. Rodgers completed 14-of-33 attempts on such throws a season ago for 462 yards, five touchdowns, zero interceptions, and a league-leading 13 big-time throws. All told, Rodgers ended the year with a passer rating of 129.1 and a completion percentage of 42.4%, which dwarfed the 13-year average of 81.8 and 32.5%, respectively.