The following teams have the luxury of possessing some of the top receiving tandems in the NFL, with each player complementing the other in different ways. As we inch closer to the start of the 2019 season, let’s examine the league’s most dynamic pass-catching duos in greater detail. 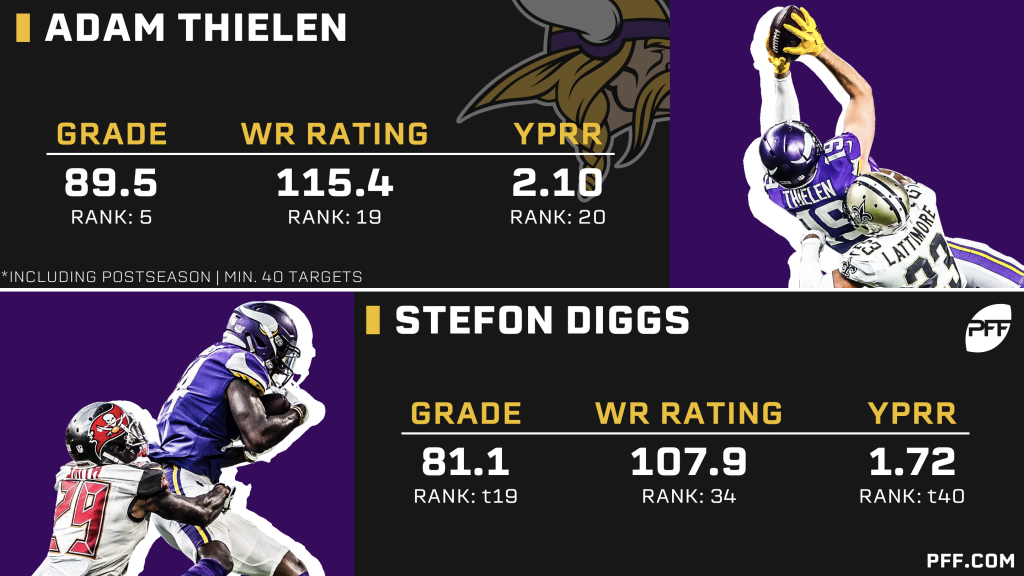 After stellar 2018 seasons, Adam Thielen and Stefon Diggs have cemented themselves as one of the most dynamic receiving duos in the NFL. The Vikings’ pass-catchers have clearly emerged as two of the league’s premier route runners and are among the best in contested catch situations.

Thielen was incredible in 2018, especially to start the year, with eight straight 100-yard games. The former undrafted Minnesota State product earned a career-high 89.5 overall grade in just his second season with 1,000-plus offensive snaps played. Among NFL receivers with 300-plus routes run in 2018, Thielen ranked seventh in receiving grade (89.5), 15th in yards per route run (2.10) and 13th in passer rating when targeted (115.4).

Diggs was equally as impressive. He picked up 1,000-plus receiving yards and an impressive 81.1 overall grade in 2018, adding to his remarkably consistent career thus far. He’s now earned 78.4 or higher overall grades in all four of his NFL seasons, and in 2018 specifically, Diggs logged just one drop and generated a 107.9 passer rating when targeted.

Odell Beckham Jr. has to be ecstatic about his future following his trade from the Giants earlier this offseason. He gets to pair up with a gunslinger at quarterback in Baker Mayfield and join forces with his good friend Jarvis Landry to form one of the NFL’s premier receiving duos.

Since being drafted in 2014, Beckham’s five-year receiving grade (92.6) ranks sixth among the 47 wideouts with at least 2,000 routes run in that span. Julio Jones, Antonio Brown and DeAndre Hopkins are the only active players who rank ahead of the former LSU standout in both receiving grade and yards per route run.

Last season, Beckham earned a 90.0 overall grade, fifth-best at the position, and was worth an impressive 1.98 Wins Above Replacement, which ranked 27th among all players and ninth among all non-quarterbacks. Aside from the 2017 season when OBJ’s season was cut short by a fractured ankle, he’s earned grades of 84.0 or higher and posted over 1,000 yards receiving every season since being drafted.

For Landry, last season may not have been one of his most efficient years, but he was able to turn it on late as the Browns pushed for a chance at the postseason.

After seeing a ridiculous 92 targets (second among wide receivers) through nine weeks that resulted in just 55 completions and 24 first downs, Landry chose quality over quantity in the second half of the season. He hauled in 26 receptions from 45 targets after Week 9 – 20 of which went for first downs. Landry produced a 74.7 overall grade on the season, his fifth straight season with a 74.0-plus grade.

There was arguably no more productive duo than Hill and Travis Kelce last season. Whether it was on contested catches, deep targets, on third down or from the slot, the tandem always came up with the big play when it mattered most.

Hill was electric from all alignments last season, recording more than 1,400 yards receiving and 12 touchdowns en route to an impressive 89.0 overall grade on the year. He was at his best, however, away from the boundary and inside the slot, as he recorded a 75.5 receiving grade from an outside alignment and an NFL-high 91.3 receiving grade in the slot. Overall, he finished second among slot receivers with an average of 3.28 yards per route run.

Hill also uses his deep speed better than any other receiver in the NFL and is a nightmare when he gets behind the defense. He finished the 2018 season with a 96.8 receiving grade on deep targets and 796 receiving yards on passes targeted 20 or more yards downfield, which was more than any other wide receiver has picked up in a single season in the PFF era (2006-present).

To go along with Hill’s speed, Travis Kelce brings a big-bodied, explosive option at tight end. Among the players at the position with at least 900 offensive snaps played in the last three seasons, Kelce ranks first in overall grade (91.1) and receiving grade (91.1). He also leads all tight ends in receptions of 15-plus yards (104), yards after the catch (1,774) and first-down receptions (189).

Thomas has also dropped just 2.76% of his 448 targets in his career, a rate that ranks third among wide receivers with at least 200 targets since 2016.

Turning in 91.3 and 89.4 receiving grades in Years 1 and 2 of his NFL career, Kamara has truly redefined the running back position. In addition to his elusiveness and overall efficiency on the ground, Kamara adds so much value in the passing game. He leads all NFL backs with at least 50 targets over the past two years in yards per route run (2.37), yards after the catch (1,528), yards after contact on receptions (593), forced missed tackles on receptions (46) and receptions of 15-plus yards (39).

Now three years into his NFL career, Kamara has been almost unstoppable in the Saints’ offense. His two-year receiving grade of 92.6 ranks first among pass-catchers out of the backfield, and he’s forced an absurd 0.201 missed tackles per touch and averaged 3.12 yards after contact per touch throughout his young career in New Orleans.

The duo of A.J. Green and Tyler Boyd made up one of the league’s top receiving tandems last year as the latter made his presence known with a breakout performance.

Before injury cut his season short, Green earned an impressive 84.9 receiving grade across 313 routes run. He also brought in 12-of-21 contested targets, and when he hauled in those contested passes, he was ripping off big gains at over 18 yards per reception. Green’s now earned an 80.0-plus receiving grade in every season after his rookie campaign in 2011.

In the nine games they played together in 2018, Boyd and Green each finished with a top-10 receiving grade and top-20 marks in yards per route run. The duo had 36 combined first-down and touchdown receptions to tie for eighth among receivers in those nine games, and Boyd actually led the league’s receivers who saw at least 45 targets in that span with a 134.1 passer rating when targeted.