The emergence of RB Kerryon Johnson

The Detroit Lions shocked the NFL world by defeating Tom Brady and the New England Patriots on Sunday night. While it was certainly a surprising win, something no one should be surprised about is the emergence of rookie running back Kerryon Johnson. 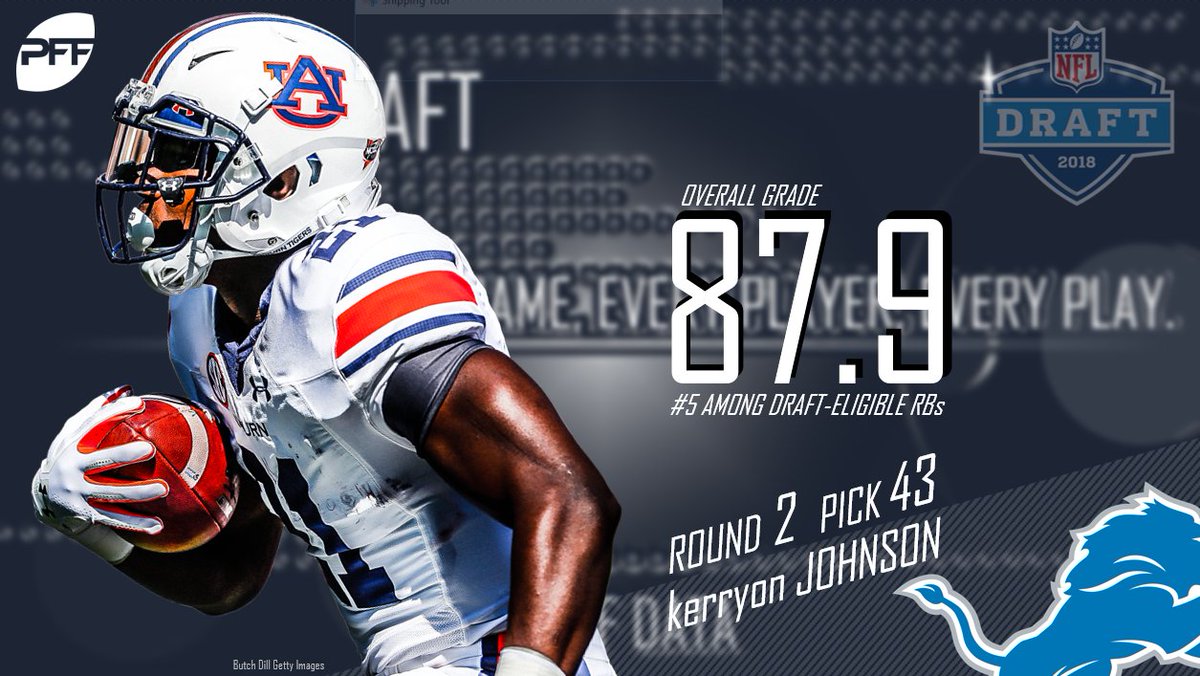 The former Auburn running back was selected in the second round of the 2018 NFL Draft after he finished his final collegiate season as the ninth-highest graded running back (87.9) in the nation. Not only did he improve his overall grade each year while in school (71.5,79.8, 87.9), but his 33.8 breakaway percentage and his 95.8 pass-blocking efficiency (he didn’t allow a sack on 89 pass-blocking attempts) in 2017 were both top-25 marks in the draft class.

After being selected by the Lions, Johnson impressed throughout spring workouts, training camp and the preseason. In his preseason debut alone, Johnson shined, rushing for 34 yards on seven carries (with a 62-yarder called back due to a penalty) and hauling in four receptions for 33 yards, before Detroit scaled back his playing time in the final three games.

Leading up to the regular season, it was reported that the team was likely to utilize a committee approach to their running game – a healthy dose of newly-acquired bruiser LeGarrette Blount on first and second downs, Theo Riddick serving as the change-of-pace third-down back and Kerryon Johnson serving as the main backup, filling in as needed.

However, after three weeks of the 2018 season, Johnson is beginning to edge out his counterparts. Not only does Johnson have the Lions’ top rushing and receiving grades through three weeks, but he also accomplished a feat on Sunday night that hasn’t been done since Thanksgiving of 2013 – he rushed for over 100 yards in a Detroit Lions uniform.

Against the Patriots, Kerryon was handed the ball 16 times, and he racked up a very impressive 101 rushing yards, with 57 of those yards coming after contact. He forced four missed tackles as a runner, moved the chains six times and averaged a very healthy 3.56 yards after contact per attempt – the sixth-best mark of the week.

While Johnson will deservedly be getting the credit for snapping such a futile streak, Detroit’s front office has been working hard behind the scenes to make it happen. After signing right guard T.J. Lang and right tackle Rick Wagner last offseason, the Lions also added our top-rated college center, Arkansas’ Frank Ragnow, with their first-round pick of the 2018 NFL Draft. Combine these additions with a healthy Taylor Decker, and the Lions have the makings of a supremely talented run-blocking unit, one that currently ranks tenth in run-blocking grade (62.6).

For a team that had gone 70 straight games without a 100-yard rusher – the second-longest streak in NFL history – it appears that Kerryon Johnson is all but cemented as the number-one back in Detroit moving forward.