In 2017, when the Cleveland Browns landed one of the league's most lauded receivers in Jarvis Landry, the seemingly doomed franchise saw a light at the end of a very long, dark tunnel. When the team selected Baker Mayfield first overall and wide receiver Antonio Callaway in the fourth round of the ensuing draft, that light got a bit brighter.

However, by the end of Week 9, the Browns found themselves with a 2-6-1 record and an underperforming receiving unit. Only one team had more drops than the Browns’ 24 in the first nine weeks, and the team’s 12 receiving touchdowns left something to be desired. However, just as it looked like the team was headed for an all-too-familiar fate, the receivers stepped up and became one of the NFL’s most daunting units. 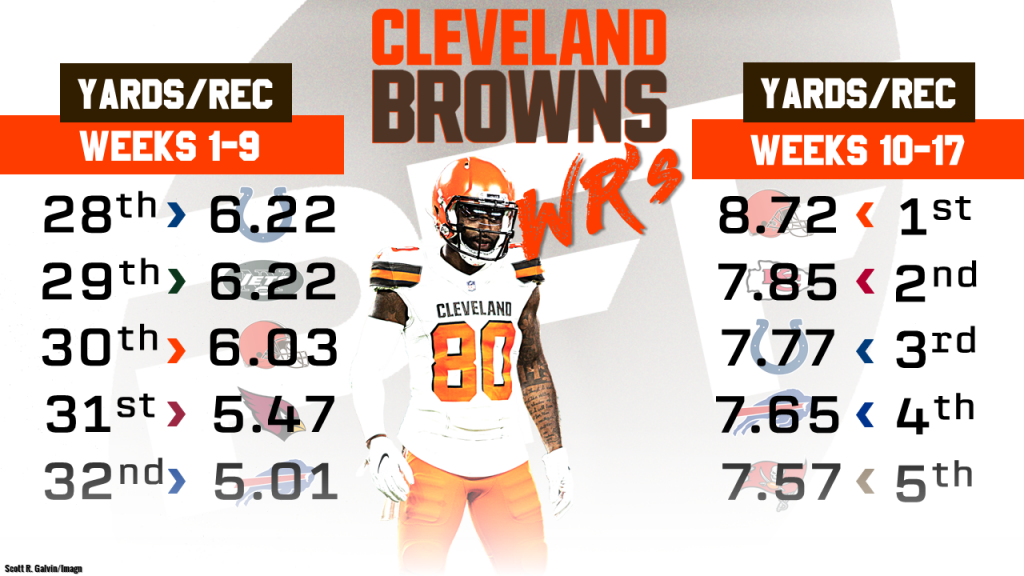 Much of that can be attributed to the work of Landry, Callaway, Rashard Higgins, and Breshad Perriman. After the former three combined for 12 drops in nine games, the group cut down on its mistakes in the latter portion of the season and finished out the year with just three drops.

Landry in particular turned it on, as the Browns pushed for a chance to play in the postseason. After seeing a ridiculous 92 targets (second among wide receivers) through nine weeks that resulted in just 55 completions and 24 first downs, Landry chose quality over quantity in the second half of the season.

He hauled in 26 receptions from 45 targets after Week 9 — 20 of which went for first downs, and he silently became a menace on deep balls alongside his aforementioned teammates.

The Browns receivers caught just two touchdowns on throws targeted 20 or more yards downfield through Week 9, but they hauled in seven of such receptions in the final eight weeks of the season, with Landry, Higgins and Perriman each notching two.

Perriman may have been the biggest surprise — and the biggest spark — to the Browns receiving unit as it looked to rebound from the tough start to the year. His first few weeks were forgettable as he saw limited targets. But after combining for nine drops in two seasons with the Baltimore Ravens, Perriman simply had a switch flip. He eventually earned a WR rating of 134.2, the best among the Browns receivers, and a 71.8 overall grade that was lightyears better than his 44.4 mark a season ago.

Then there’s Rashard Higgins and Antonio Callaway, both of whom are young and speedy targets. Only first-round picks D.J. Moore and Calvin Ridley had more yards after the catch as rookies than Callaway, and Higgins posted a 122.3 passer rating when targeted that ranked 13th among 108 qualifying wide receivers.

With Baker Mayfield playing the way he did, it was only right that the Browns were victorious in five of their last seven games. Assuming that much of the offensive core stays intact, a slightly better start to the season in 2019 will easily have the Browns contending for a playoff berth.