Stephon Gilmore’s dominance since joining the New England Patriots is well documented. After earning what was a career-high 87.2 coverage grade in 2017, the 28-year-old South Carolina alumnus turned in a 90.8 coverage grade in 2018 and finished the season as PFF’s highest-graded cornerback overall (90.9).

The success of Gilmore’s counterpart, however, isn’t as well known, leaving one of the NFL’s best cornerback tandems to fly under the radar.

Rookie J.C. Jackson took the long road to the Pats’ 53-man roster this offseason, going undrafted in 2018 after an April 2015 arrest lost him his scholarship to Florida and sent him to community college for a year (2015) and Maryland for two years (2016-17) after that. But he made the most of his opportunity without question. 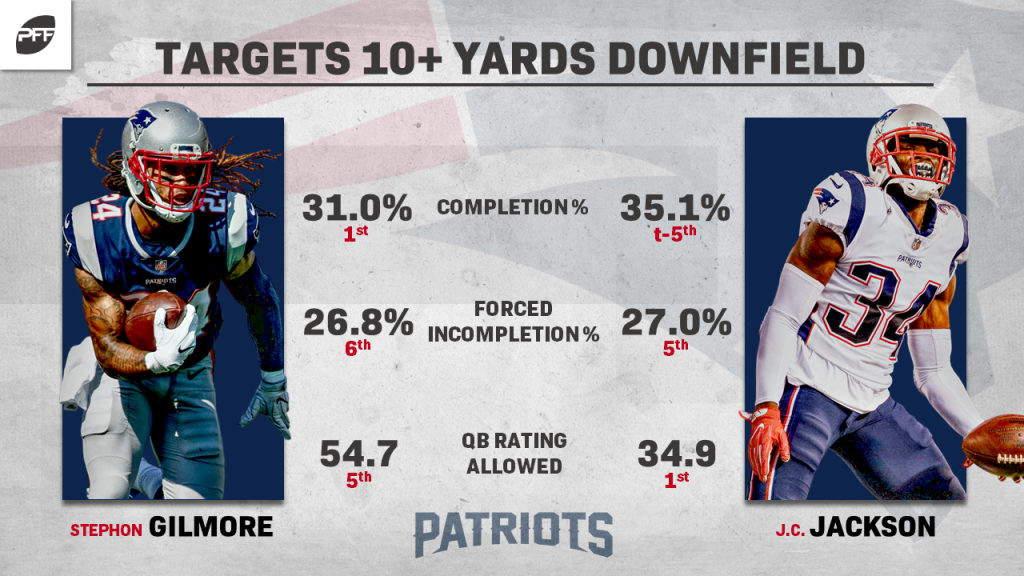 Jackson averaged 39.3 defensive snaps a game from Week 7 through the Super Bowl as the Pats’ starting outside cornerback opposite of Gilmore. His 72.4 overall grade on the year (includes postseason) ranked just 29th among the 89 cornerbacks with at least 50 targets, but his efforts on downfield targets largely made up for his struggles against underneath routes. He earned just a 62.4 coverage grade on passes on nine or fewer air yards but turned the second-best coverage grade (74.4) on passes of 10-plus air yards in 2018. 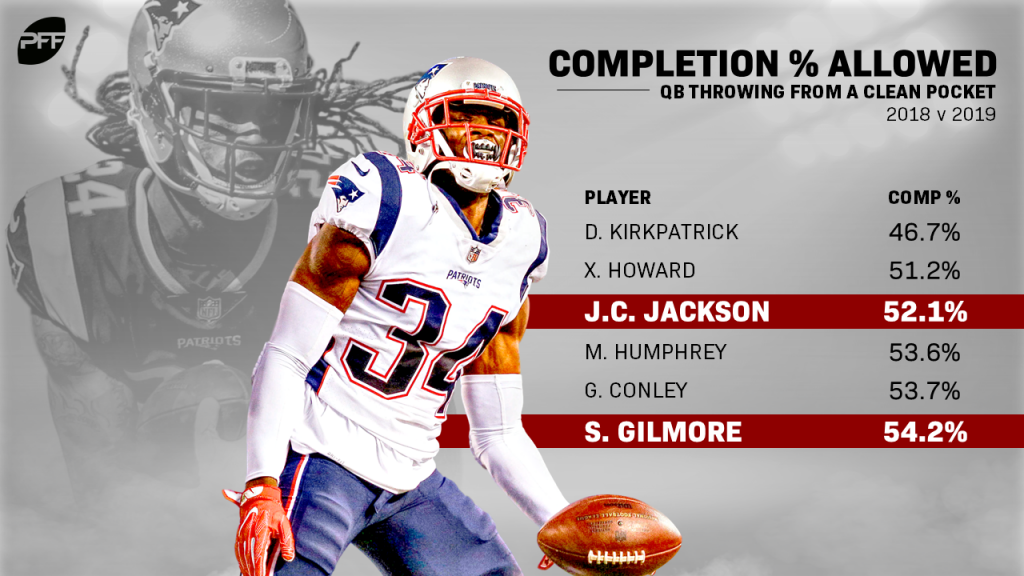 Gilmore’s 84.8 coverage grade in single coverage ranked third among cornerbacks with at least 20 targets in such coverage a year ago. Baltimore Ravens’ Marlon Humphrey (90.6) and Chicago Bears’ Kyler Fuller (90.0) were the only two corners ahead of Gilmore.

Veteran Jason McCourty, who re-signed with the Patriots on a two-year deal this offseason, also thrived playing mix of outside cornerback (571 defensive snaps) and slot cornerback (313 defensive snaps) in 2018. Earning a career-high 83.3 coverage grade a year ago, McCourty should start opposite of Gilmore and allow New England to continue to develop JC Jackson as a rotational piece.

Jackson, who will enter his sophomore season in the NFL at 23 years old, still has a ways to go before he nears Gilmore’s level of dominance in coverage, but his hot start is evidence such accolades are within reach. If he’s able to maintain if not improve on his rookie successes in 2019 and Gilmore still plays at Gilmore levels, New England’s top cornerback tandem won’t be flying under the radar for much longer.