Stats to know for all 32 NFL teams entering Week 16

The Stats To Know series continues with Nathan Jahnke, PFF's Director of Analytics, finding an interesting piece of information about all 32 teams after 15 weeks of football. If you would like to make some observations of your own, you can do so with PFF Elite, where you can find several signature statistics for every offensive and defensive position in football, thanks to Premium Stats 2.0.

Buffalo Bills: Jerry Hughes has produced 24 fourth-quarter pressures this year, which is the most for all edge defenders. What makes it more remarkable is the fact that he’s only had 85 fourth-quarter pass rushes. 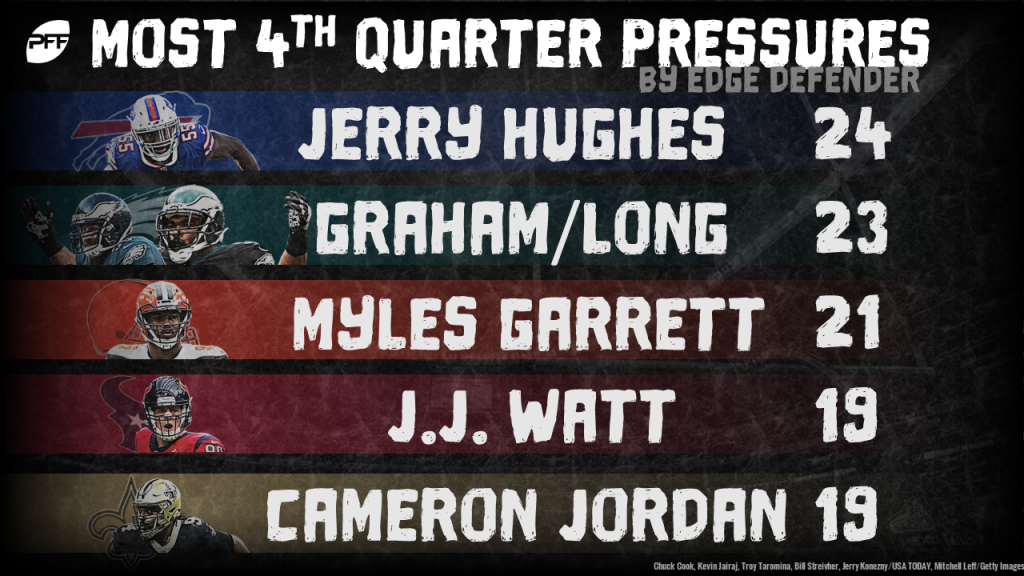 Miami Dolphins: When his opponents have been in the red zone, Cameron Wake has gotten pressure on 27.5% of his pass rushes, which is the best rate among edge defenders.

New England Patriots: Stephon Gillmore has 13 pass breakups this season,  which is two more than any other cornerback.

New York Jets: Undrafted rookie Frankie Luvu has gotten pressure on 21.6% of his third-down pass rushes this year, which is the fifth-best rate for edge defenders this season.

Baltimore Ravens: Over the last five weeks, only five backs have logged 25 or more carries without being tackled for a loss. Two of them are Gus Edwards and Kenneth Dixon.

Cincinnati Bengals: Since Week 11, Joe Mixon has run for 15 or more yards on 10% of his carries, which is the second-best rate for running backs in that time.

Cleveland Browns: Kevin Zeitler has allowed either one pressure or no pressures in 13 of 14 games this season, which is tied for the most among all offensive linemen.

Pittsburgh Steelers: Steelers players have produced 2450 yards after the catch this season. That’s an average of 175 yards per game, and they only need to average 122 over the last two games to have the most ever recorded by a team in a single season.

Houston Texans: Texans players have dropped just 10 passes this season. Over the last 13 seasons, the fewest drops for a team in a single season is 11, by the 2006 Buffalo Bills.

Indianapolis Colts: Since Week 11, rotational pass rusher Kemoko Turay has gotten pressure on 21% of his pass rushes, which is the highest rate among all edge defenders with at least 50 pass rushes in that time.

Jacksonville Jaguars: Myles Jack has allowed 0.69 yards per coverage snap over the last two seasons combined, which is tied with Luke Kuechly for the second-best mark among linebackers in that span.

Tennessee Titans: Since Week 11, only seven of the 17 passes thrown Jayon Brown’s way have been caught and on two of those catches he’s made a stop. That 70.6% incomplete or stop rate is the best among linebackers in that time.

Denver Broncos: Since entering the league, Chris Harris Jr. has 12 interceptions and 28 pass breakups from the slot. Both of those lead all cornerbacks in that span.

Kansas City Chiefs: Mitch Morse has gone 202 straight pass blocks without allowing a pressure, which is more than double the next-longest active streak by any offensive linemen.

Los Angeles Chargers: Joey Bosa has five or more pressures in each of the last four games. That is tied for the longest active streak for defensive players.

Oakland Raiders: Over the last five weeks, Karl Joseph has one interception, one pass breakup, and no catches allowed on four plays where he was the primary defender in coverage.

Dallas Cowboys: Over the last five weeks, Amari Cooper has racked up 252 yards after the catch, which is the most for all wide receivers in that time. 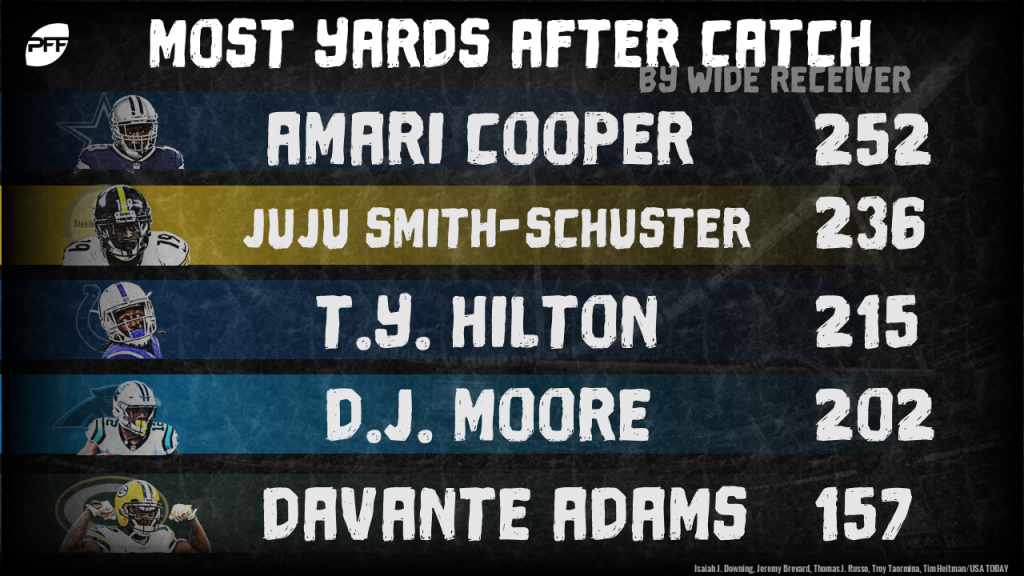 New York Giants: Saquon Barkley has tallied 14 carries of 20 or more yards this season. Over the last four seasons, that is tied for the most in a single season.

Philadelphia Eagles: Fletcher Cox has four or more pressures in 12 games this season. That is the most for all defensive players, regardless of position.

Washington: Josh Norman has 70 consecutive games allowing six or fewer catches. It’s the longest active streak in the NFL and is three games away from tying Darrelle Revis for the longest streak in the PFF era (2006-present).

Chicago Bears: Prince Amukamara has had 77 consecutive games with 10 or more coverage snaps and fewer than 100 receiving yards allowed. In the past decade, only Richard Sherman and Darrelle Revis have had longer streaks.

Green Bay Packers: Over the last three seasons, David Bakhtiari has allowed pressure on 3.46% of his pass blocks, which is the best rate for all left tackles with at least 1000 pass blocks in that span.

Minnesota Vikings: Stefon Diggs has caught 99 straight passes without a drop. That is the longest active streak for wide receivers, and third-longest streak for a wide receiver this decade. 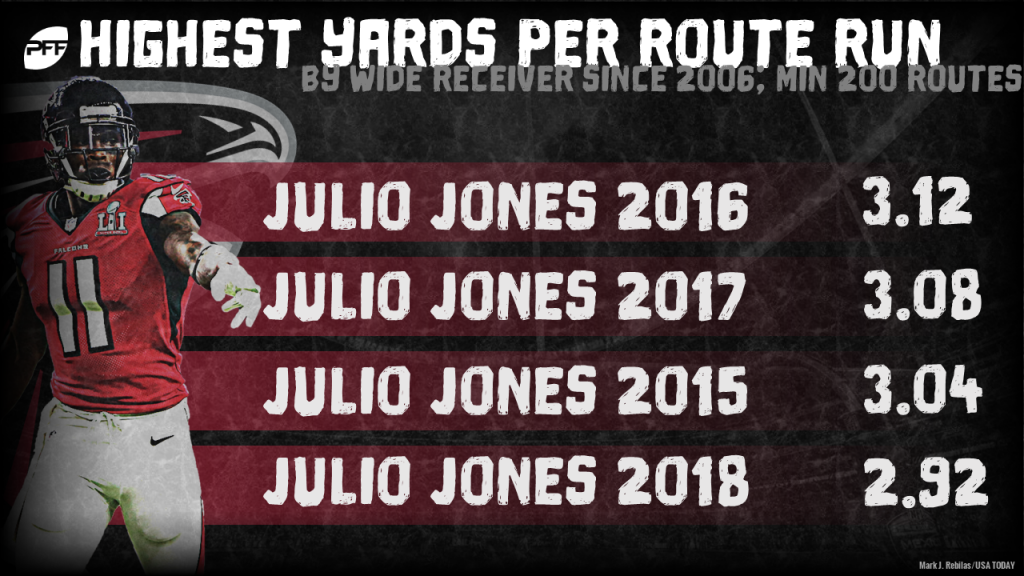 Carolina Panthers: Luke Kuechly has 37 run stops this season, which is the most for all linebackers.

New Orleans Saints: Ryan Ramczyk has allowed one pressure or no pressures in ten games this season, which is tied for the most among all offensive tackles.

Tampa Bay Buccaneers: Over his career, DeSean Jackson has amassed 4657 receiving yards from deep passes. That is over 1000 more yards than any other wide receiver on deep passes since 2008.

Arizona Cardinals: Of the 74 wide receivers with at least 500 targets since the start of the 2006 season, Larry Fitzgerald has the lowest drop rate, as he's dropped just 3.57% of the catchable passes thrown his way.

Los Angeles Rams: The Rams' defense has missed just 27 tackles in coverage this season, which is tied for the fewest among all teams.

San Francisco 49ers: 49ers players are averaging 7.3 yards after the catch per reception. If they keep that up over the last two games, it will be the best mark ever recorded by a team in the PFF era.

Seattle Seahawks: Bobby Wagner has now made 115 consecutive tackles or assists without missing a tackle. If he gets one more, that will tie Takeo Spikes' record (2008-2010) for the second-longest streak of the PFF era. The man in first is Bobby Wagner, with 140 (2016-2017).