Sophomore standouts from the 2018 NFL season

Playing football at the professional level is tough, and excelling in the NFL is never a given – even for some of the best to come out of college. Some guys can figure things out right away as an NFL rookie, for most though, it takes some time to adjust to the level of play at the highest level. This week we’re going to look at 13 players who took a big step forward in 2018 after they struggled as rookies in 2017. To qualify for this list, a player had to have seen at least 200 offensive or defensive snaps in both 2017 and 2018, and their overall grade had to increase by at least 15.0 points from Year 1 to Year 2. 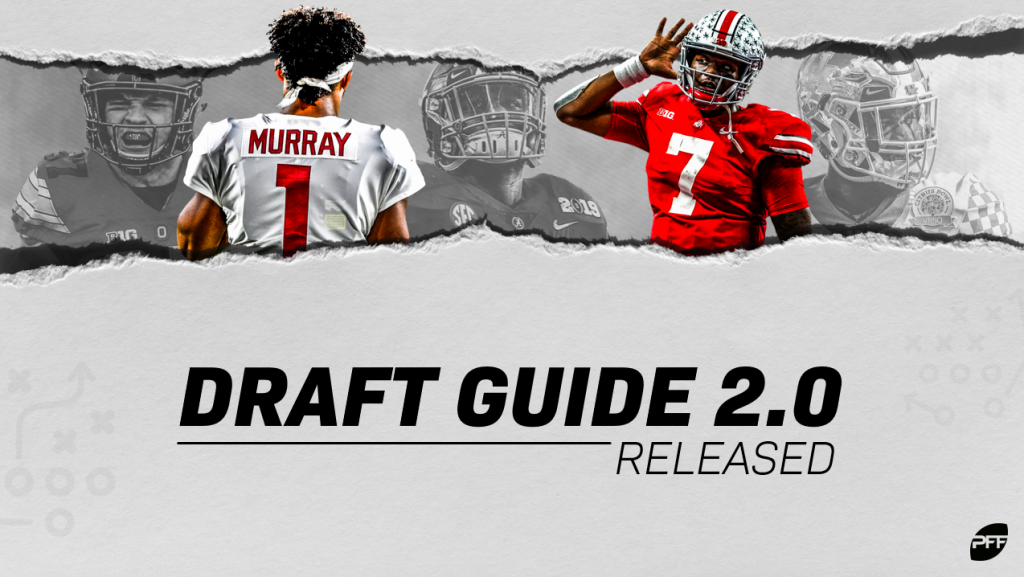 Everett finished the 2018 season as our fourth-highest graded tight end, exactly one season after he ranked 50th out of 51 qualified tight ends as a struggling rookie. The Rams' 2017 second-round pick caught 97.4% of the catchable passes thrown his way as an NFL sophomore after he hauled in just 70.8% of catchable passes as a rookie, and he showed tremendous improvement as a run blocker, as he ranked fourth in the league last season with a 76.3 run-blocking grade, a grade that was over 20.0 points higher than the 54.6 run-blocking grade he earned as a rookie. 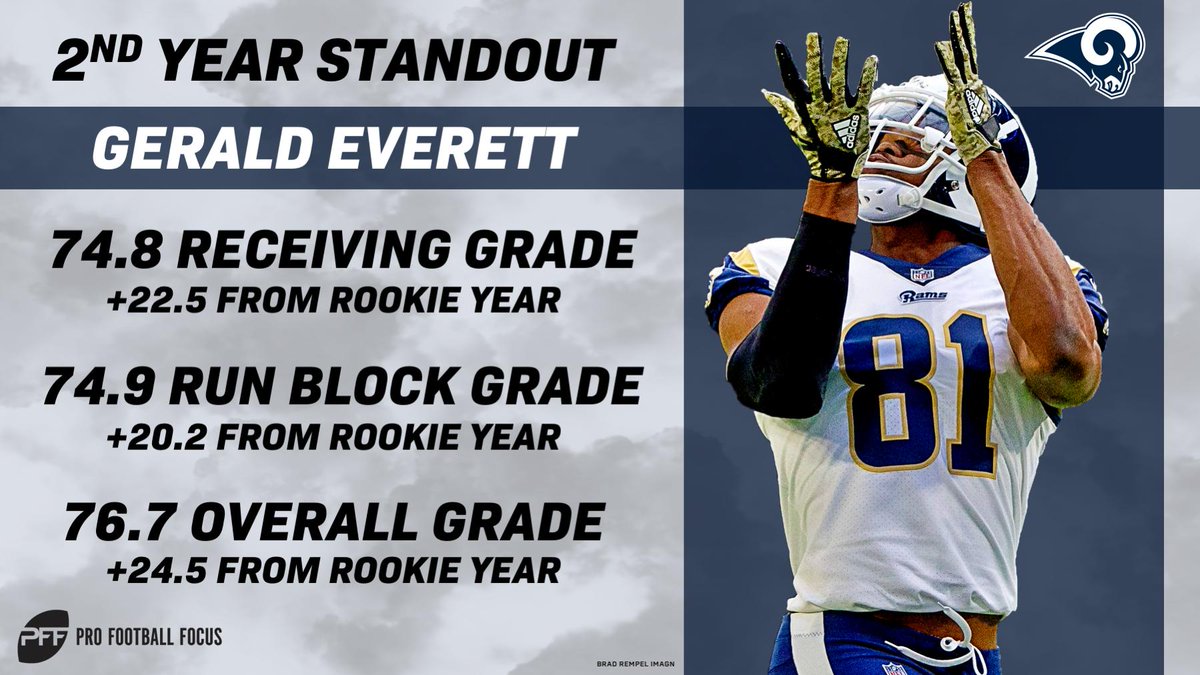 With health on his side and a full year of NFL experience under his belt, Williams took some big strides in 2018. The former first-round pick ranked 39th out of 107 qualifying receivers this past season with an average of 1.74 yards per route run, a year after he averaged just 0.70 yards per route run as a rookie. The former Clemson star hauled in 86.5% of the catchable targets thrown his way in 2018 compared to just 70.6% of his catchable targets in 2017, and he generated a 133.2 passer rating when he was targeted as an NFL sophomore compared to only a 41.0 passer rating when he was a rookie.

Howard finished 2018 as our second-highest graded tight end after seeing his own rookie struggles a season ago. Howard’s average yards per route run increased from 1.85 in 2017 to 2.26 in 2018, he caught nearly half of his contested targets in Year 2, and most importantly, he didn’t put the ball on the ground after fumbling three times on just 27 receptions as a rookie.

Out of the 102 linebackers who saw at least 200 defensive snaps in 2017, Brown ranked 79th in terms of overall grade. In 2018, he ranked ninth out of 99 linebackers who surpassed the 200-snap mark. As a pass rusher, Brown brought his win rate (the rate at which he beats a pass blocker on a pass rush, even if the throw gets off too quickly for pressure to land) up to 17.5% in 2018 after posting a rate of just 9.8% as a rookie. In coverage (not considering throws that ended up being incomplete due to inaccuracy by the QB or a drop by the receiver), Brown allowed a first down or touchdown on 47.8% of targets into his coverage as a rookie, in 2018 that rate dropped all the way down to 33.3%. 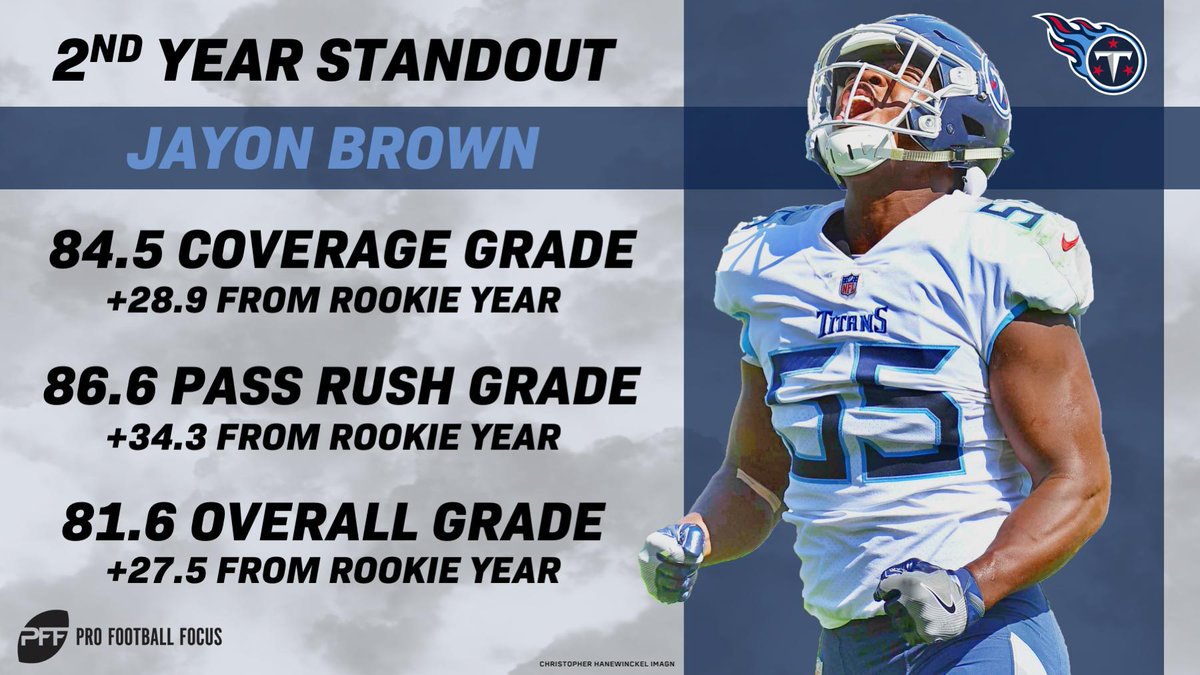 Jackson graded out as the top safety in the entire league in 2018, a considerable jump after he finished 2017 ranked 56th among players at the position. As a rookie, Jackson allowed 81.8% of the targets into his coverage to be caught, he forced an incompletion on only 15.2% of targets into his coverage, and opposing quarterbacks put up a 107.8 passer rating when they targeted him in coverage. In Year 2, that completion percentage plummeted down to just 54.4%, his forced incompletion rate rose to 21.7%, and opposing signal-callers managed just a 52.8 passer rating against him.

Kittle took a giant step forward in his sophomore NFL season, finishing 2018 as our highest-graded tight end after posting just a borderline average grade as a rookie. On a per-snap basis, Kittle doubled his production as a receiver from Year 1 to Year 2, as he averaged a league-leading 2.83 yards per route run in 2018 after he averaged just 1.41 yards per route run in 2017. Kittle also showed improvement as a run blocker, bringing his grade in that department up from 61.7 to 73.3 in his second season. 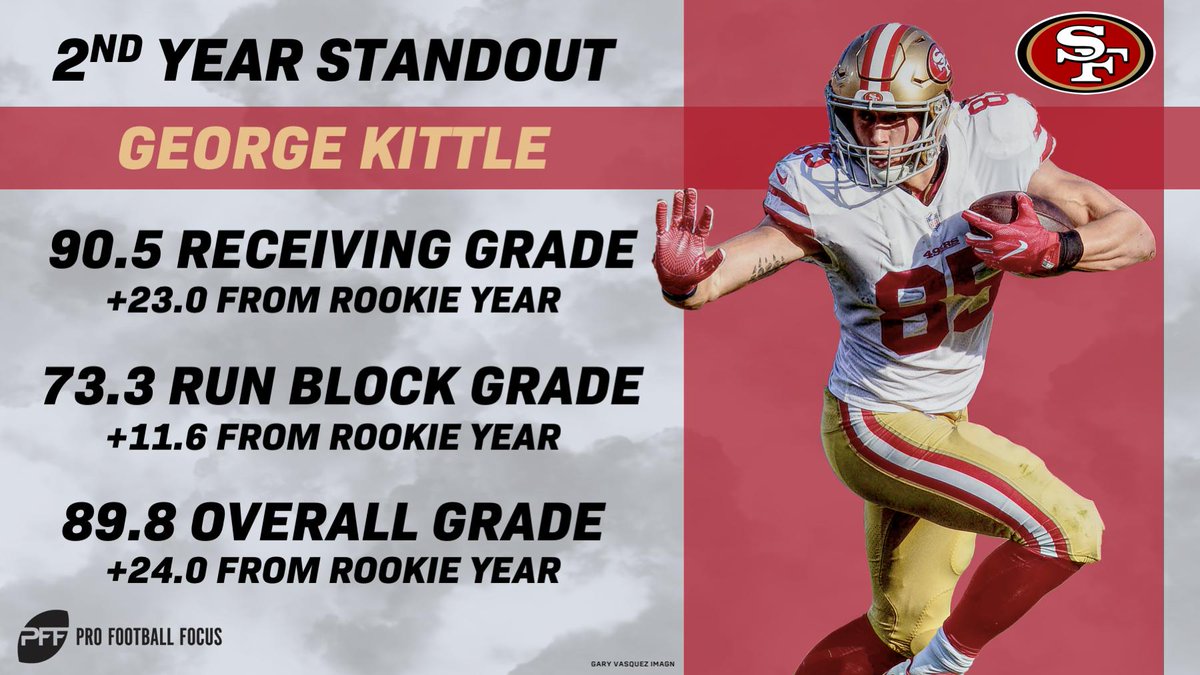 Whether it was the change of scenery or a player who simply needed a year to adjust to the league, Hester played much better for the Eagles as an NFL sophomore than he did during his rookie season for the Oakland Raiders. As a rookie, Hester graded out as the 63rd-best interior defender out of 131 players who logged at least 200 defensive snaps. During his second season, he graded out at 13th out of 129. As a pass rusher, his win rate jumped from 6.6% to 13.2% from Year 1 to Year 2, and his average depth of tackle in run defense dropped from 2.62 yards to 1.44 yards.

Godchaux finished his second NFL season ranked 45th out of 129 interior defenders who saw at least 200 defensive snaps. As a rookie in 2017, he ranked 118th out of 131. Godchaux showed a great deal of improvement in run defense: as a rookie, he received a negative grade on 15.1% of his run-defense snaps, during his second season, however, that rate dropped all the way down to 6.5%. In 2018, he ranked 20th among interior defenders with an average depth of tackle of just 1.43 yards.

Adams finished his rookie season ranked 51st among qualified safeties in terms of overall grade. In 2018, he ranked fourth, and he earned a grade north of 77.0 in all four of our defensive grading categories: run defense, tackling, pass rushing and coverage. Adams cut his missed tackle rate down from 13.6% as a rookie to just 7.5% in Year 2; he brought his pressure rate as a pass rusher up from 13.7% to 28.1% and the passer rating he allowed into his coverage plummeted from 124.7 to 67.6. 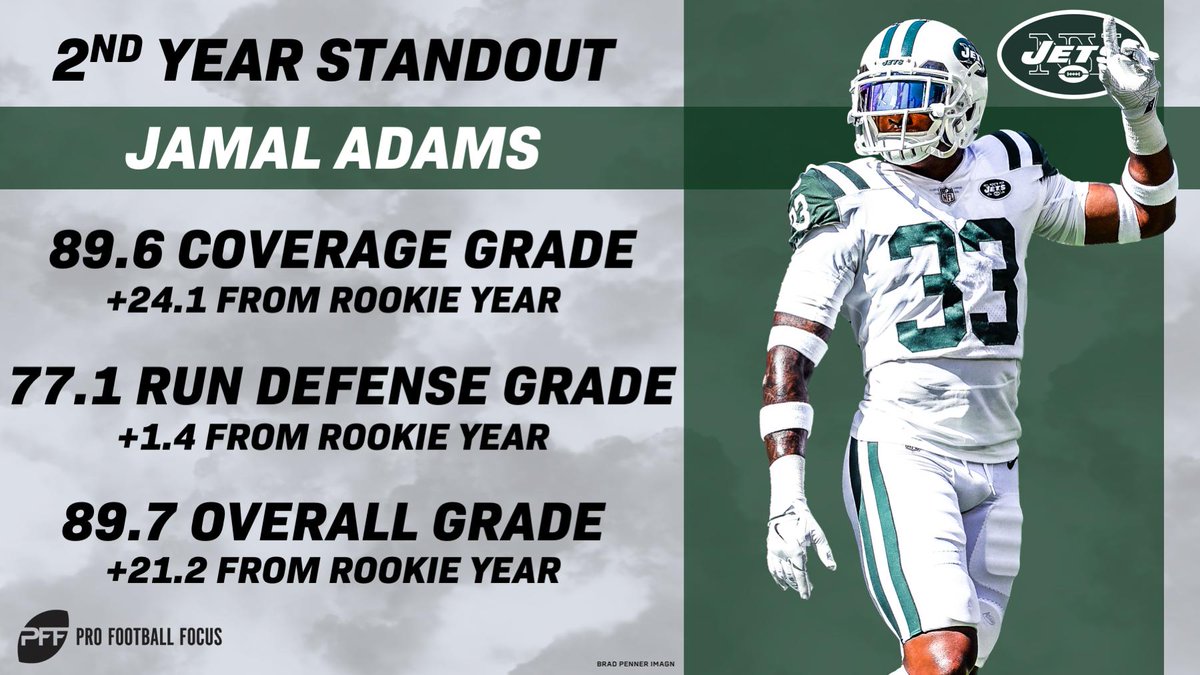 Peppers finished his rookie season ranked 80th out of 98 safeties who saw at least 200 defensive snaps, but he bounced back in Year 2 to finish 23rd out of 104 qualified safeties. Peppers ranked 23rd among safeties with 20 total stops in 2018 – he managed just eight stops in 2017. 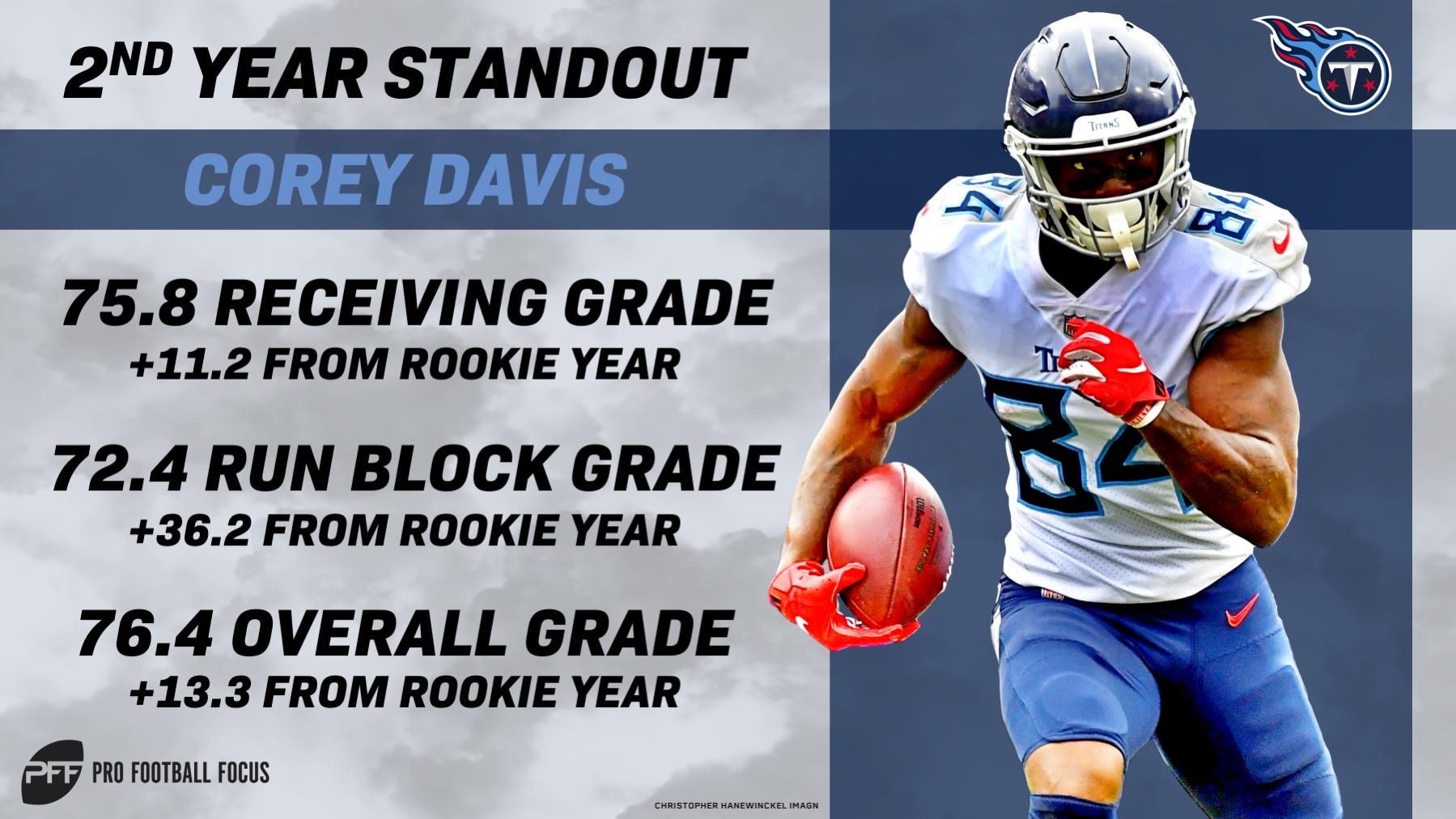 Milano ranked 60th among qualified linebackers in terms of overall grade as a rookie and then climbed his way up to 12th among his positional peers in Year 2. In coverage in 2017, Milano had just a 2.6% forced incompletion rate, and he had as many stops (five) as he did missed tackles. In 2018, that forced incompletion rate shot up to 11.1%, and he more than doubled his stop total to 12.