GREEN BAY, WI - SEPTEMBER 10: K.J. Wright #50 of the Seattle Seahawks in action during a game against the Green Bay Packers at Lambeau Field on September 10, 2017 in Green Bay, Wisconsin. The Packers won 17-9. (Photo by Joe Robbins/Getty Images)

The Seattle Seahawks‘ linebacking corps got a lot stronger Wednesday night, as Gregg Bell of The News Tribune reported that linebacker K.J. Wright had agreed to return to Seattle on a two-year contract.

One of the few remaining faces of the 2013 Super Bowl-winning team, the 29-year-old linebacker finished the regular season with an overall grade of 70.2 in 2018, ranking 28th out of 96 qualifying players at the position. It's the fourth time in eight seasons with Seattle that Wright has graded above 70.0, and the eighth time that he's graded above 65.0. 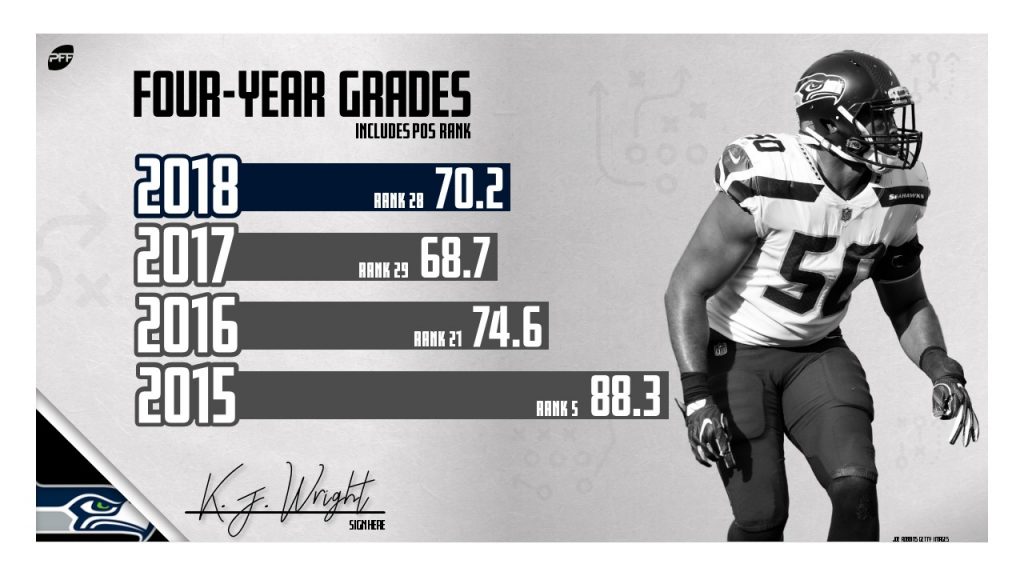 It’s been four years since we saw Wright at his best, but that doesn’t mean he’s not still an effective linebacker. In fact, Wright has been one of the most well-rounded players at the position over recent seasons.

As good as Wright has been in all facets of the game, he has really made his name known in run defense. Over the last three years, he's tallied 66 defensive stops from his 929 run-defense snaps, while his average depth of tackle of 3.06 yards ties with Zach Brown for the 12th-best mark among linebackers with at least 500 run-defense snaps in that span.

Wright has also been as sure as they come as a tackler, which is something that makes the duo of Wright and Bobby Wagner one of the best linebacker tandems in the league. Since 2016, Wright has missed just 18 of his 256 tackle attempts, and his resulting missed tackle percentage of 6.7% ranks seventh among qualifying off-ball linebackers.

As if that wasn't already enough, Wright has also shown well in coverage, which is a vital skill set for a linebacker in today's NFL. Over the last three years, Wright has allowed a catch rate of 71.1%, which ranks fourth among the 34 linebackers with at least 1000 coverage snaps since 2016, while his 96.0 passer rating allowed and his 10.4 snaps played per reception allowed ranks 10th and 12th, respectively.

It's a wise move for the Seahawks, who have now lost most of the founding members of the fabled “Legion of Boom.” With Wright now back under contract, his veteran presence and solid work in all facets of the game will go a long way as the team attempts a return to the same defensive heights of years past.