Matt Ryan's struggles against Philadelphia, in the red zone continue

Our third-highest graded quarterback in the NFL in 2017, Atlanta Falcons quarterback Matt Ryan looked anything but that in the season opener against the Philadelphia Eagles, continuing his struggles in the city of brotherly love.

PFF Senior Analyst Mike Renner mentioned after the game about how dominant the Eagles defensive front was, and that was especially true on the Falcons final drive, with their pass-rushers in the Falcons defensive backfield so often that they should have considered taking out a mortgage.

Reviewing the last drive it’s a minor miracle the Falcons made it as far as they did. Eagles D-Line was murdering the Falcons O-Line play after play

The Falcons were right where they needed to be as the game approached the end though, and had 1st & Goal from the Eagles 10-yard line with 24 seconds left on the clock. This was the Eagles defense though, a unit that didn’t allow a single point in the final two minutes of the regulation in 2017, including the playoffs.

What followed over the next three plays was a clinic by the Philadelphia defense, putting Ryan under pressure that led to a throwaway, a throw out of the back of the end zone and a play where Ryan was hit as he threw. Fourth down saw a hopeful heave by Ryan also go through the back of the end zone, but a penalty gave the Falcons one last try. If anything was obvious from what had come before it in the game, the ball was always likely to go to Julio Jones. He would finish the game with 18 targets, but the final one wasn’t good enough to win the game.

Jones was single covered by cornerback Ronald Darby, and while it would have taken an impressive athletic effort to get his feet down in bounds, the Eagles defensive back forced him out to seal the victory for the defending Super Bowl Champions.

Despite the fact that Ryan graded so well for us a year ago, his PFF grade on the road against the Eagles, and in the red zone, should have been an indication that it wouldn’t be an easy night for the Falcons offense. A top-five graded quarterback in four of the past six seasons, including the playoffs, he has always struggled in Philadephia. For his career against the Eagles, his PFF grade is just 63.3. For context, if that was a quarterback’s grade over a season, they would have ranked 40th at the position last season. Against the Eagles in Philadelphia, Matt Ryan drops from a top-five quarterback, to not even among the top 32.

Red-zone struggles are something that have plagued the Falcons in back-to-back losses in Philadelphia, and while it’s easy to blame offensive coordinator Steve Sarkisian, the fact of the matter is that Matt Ryan has always struggled in the red zone. 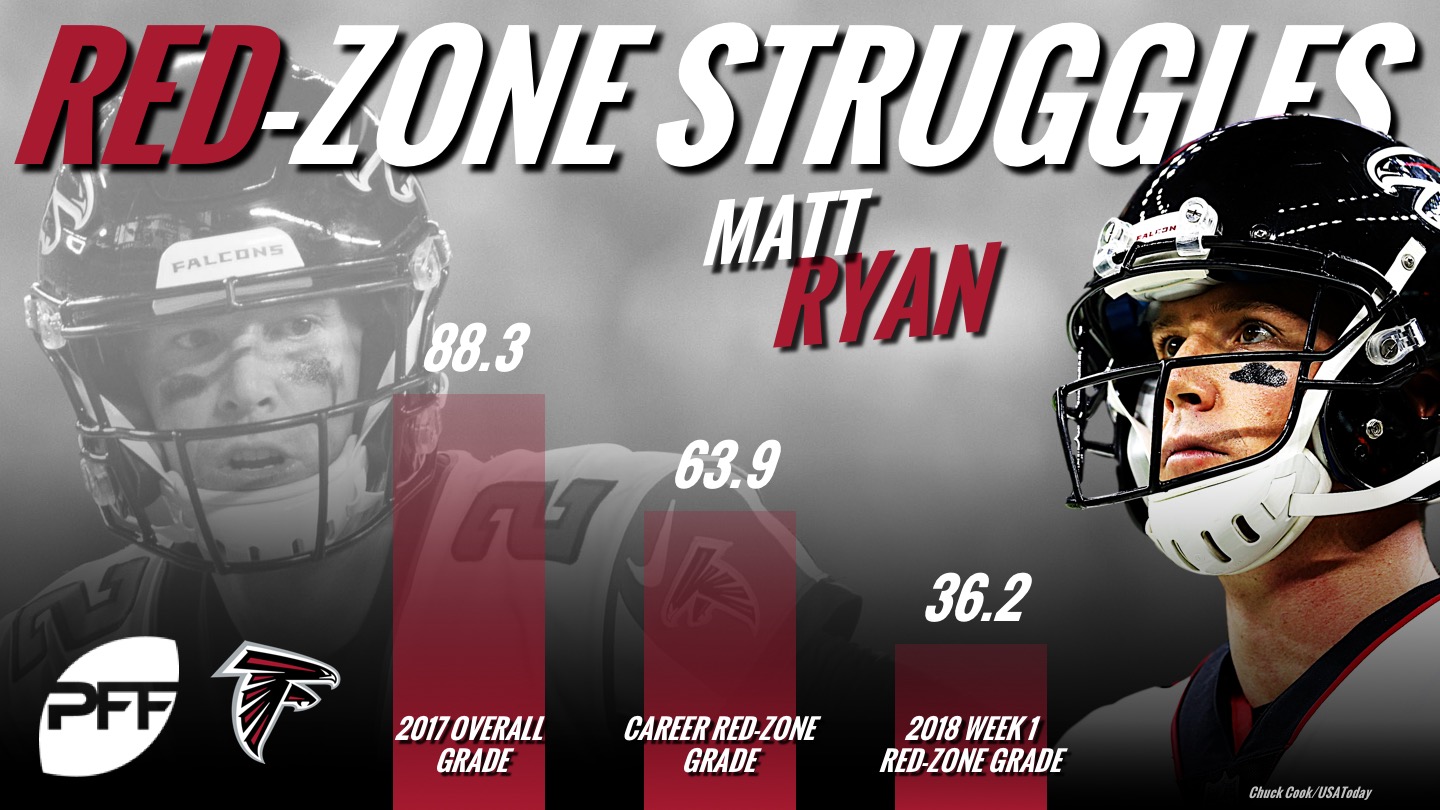 For his career, Ryan has an adjusted completion percentage of 73.6 percent on throws outside of the opponent's 20-yard line. However, when he gets inside the red zone, Ryan's adjusted completion percentage drops to 64.8 percent. Last evening, that was clearly evident as he completed 2-of-10 passes for just 13 yards with one interception inside Philadelphia's 20-yard line. All told, he finished with a passer rating of just 0.0 in the red zone. 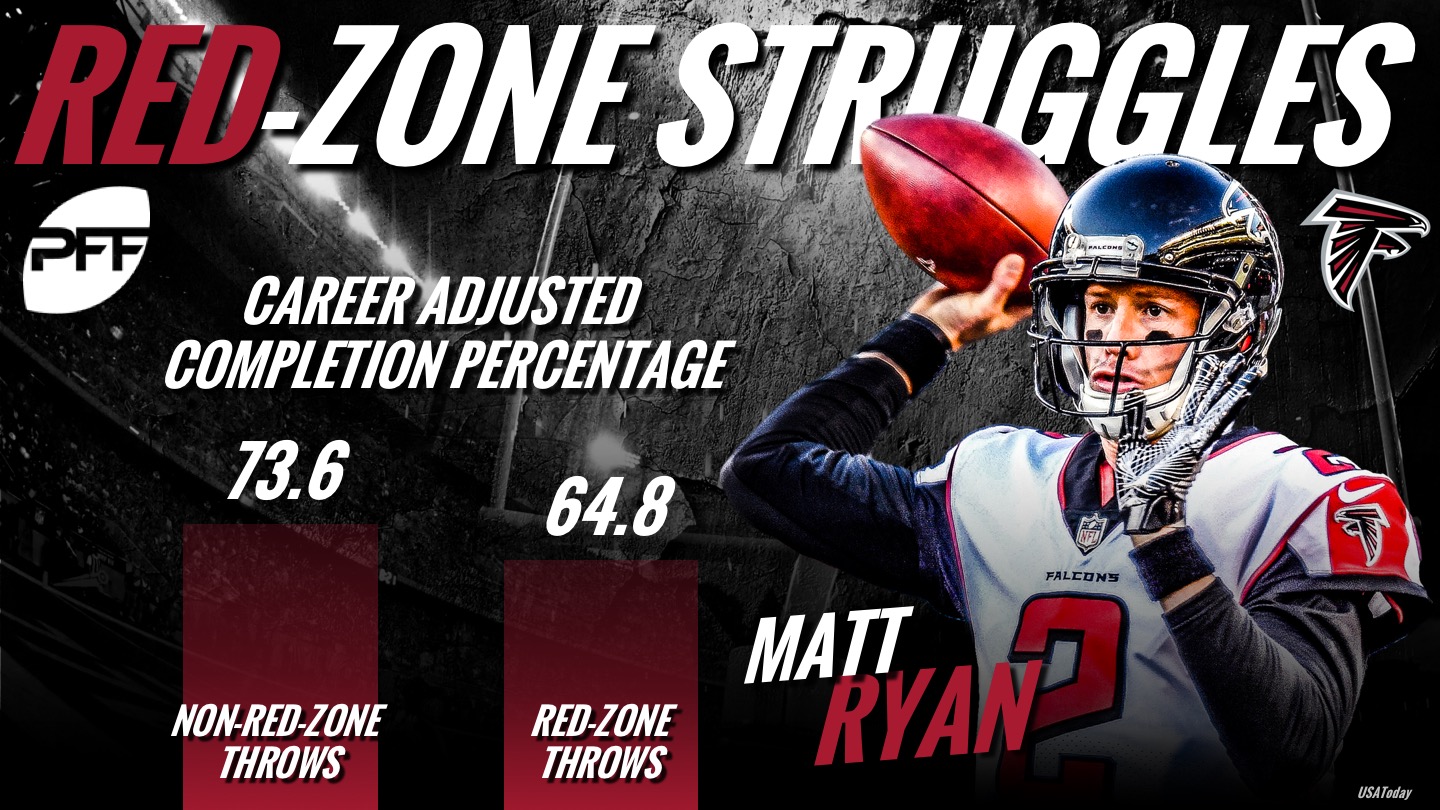 As good as Matt Ryan has been, with a PFF grade of 94.5 in between the 20s, he just hasn’t been good enough when it really matters most.