The Seattle Seahawks took a step back last season and missed the playoffs for the first time in the Russell Wilson era. Seattle’s porous pass-blocking unit (ranked 30th by PFF) and limited rushing attack (22nd) stymied the offense, forcing Wilson to try and win games by himself. Despite the postseason absence, in crunch time, Wilson put the team on his back and transformed into a superhuman quarterback.

On the season, and in the fourth quarter, Wilson completed 94-of-139 passes for a mind-boggling 1,442 yards and 19 touchdowns with a 138.2 passer rating and only one interception.

Wilson’s numbers in the fourth quarter eclipsed all other quarterbacks in the NFL and he outpaced the next best quarterbacks by a significant margin: 206 more yards than Drew Brees, 3.7-point increase in passer rating over Jimmy Garoppolo and 10 more touchdowns than Matt Ryan. His passer rating of 144.9 on all ‘aimed’ throws was also tops in the NFL and 53.7 points higher than the NFL average when removing throw aways, spikes, passes in which he was hit as he threw and passes batted at the line of scrimmage. Wilson amassed such immense production on a relatively modest 139 pass attempts, which only tied him for ninth most among the league's quarterbacks. 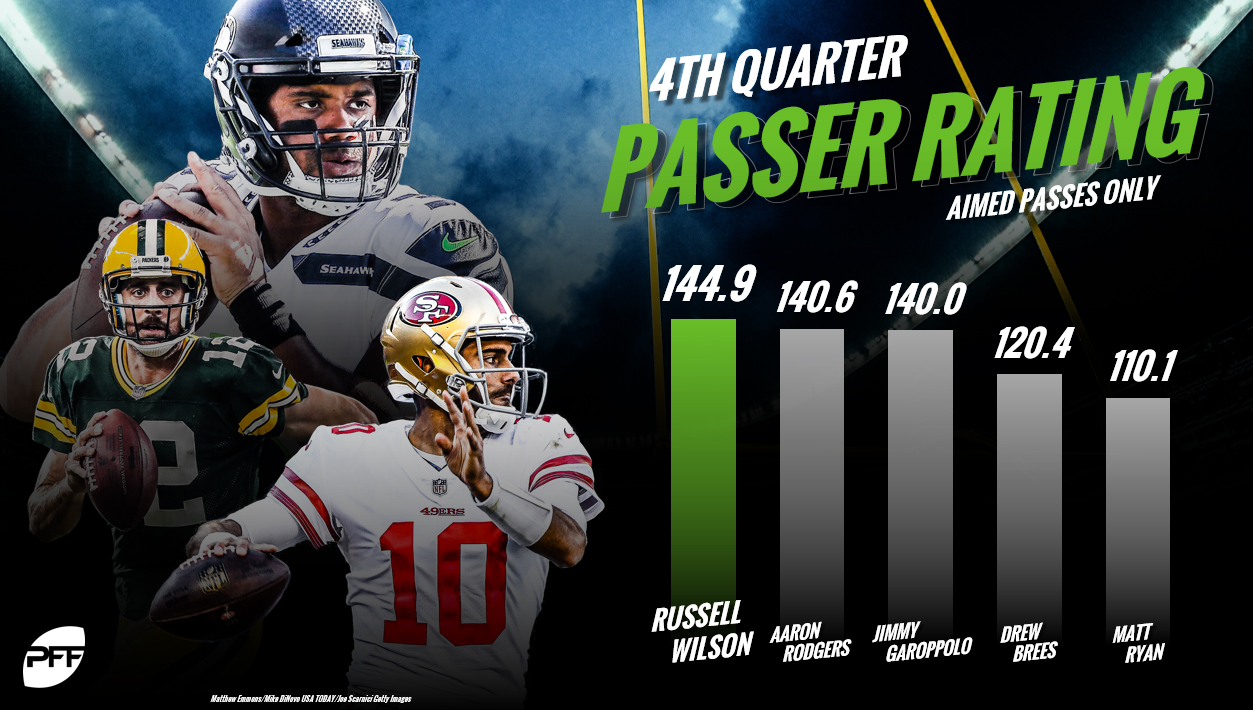 There were 218 fourth-quarter passing touchdowns thrown by 50 different quarterbacks in 2017, of which Russell Wilson accounted for an astounding 8.7 percent of those. PFF has data for all NFL games since 2006 and we have never seen a quarterback come even close to recording 19 fourth quarter passing touchdowns in a single season. Eli Manning threw 15 in 2011 while Peyton Manning and Drew Brees passed for 14 in 2013 and 2016, respectively.

Wilson spread the wealth by connecting to six different receivers on fourth quarter scores: five to Jimmy Graham, four to Doug Baldwin, four to Paul Richardson, three to Luke Willson, two to J.D. McKissic and one to Tyler Lockett.

Wilson was a completely different quarterback in the first three quarters, throwing for 15 touchdowns and a pedestrian 83.5 passer rating with 10 interceptions. He threw more touchdowns in fourth quarters than he did in all other quarters combined.

When the fourth quarter arrived, Wilson put forth his best effort by throwing for a whopping 10.4 yards per attempt (second) with a 138.2 overall passer rating (first).

Where did Wilson’s fourth quarter excellence come from? No matter which way you slice it, PFF’s Signature Stats offer some insight into just how good Wilson was in the fourth quarter last season.

Wilson shredded defenses when given a clean pocket to the tune of 15 touchdowns with no interceptions and an astonishing 148.9 passer rating (first among QBs). Wilson’s performance declined marginally under pressure, but was still good enough to rank second only to Tom Brady as he threw for four touchdowns and one interception to put forth a respectable 106.3 passer rating. Wilson was pressured on 38.1 percent of fourth quarter dropbacks compared to 42.4 percent of dropbacks in the first three quarters, a tangible decrease in pressure rate even for the Seahawks offensive line that struggled last season.

He didn't just throw dink-and-dunk passes either as he did not shy away from the deep ball in fourth quarters. Wilson uncorked 26 deep passes at least 20 yards downfield for 477 yards, seven touchdowns against no interceptions for a 132.2 passer rating. All these numbers were tops among NFL quarterbacks. Wilson uncharacteristically struggled passing downfield in the first three quarters as he threw 65 deep passes for 657 yards, only five touchdowns to five interceptions and an ugly 64.7 passer rating (32nd among QBs). Wilson’s return to deep passing form in the game's final stanza could be attributed to the fact that he attempted deep shots more – seeing an increase in deep pass attempt percentage from 15.7 percent in the first three quarters to 18.7 percent in the fourth quarter.

Think his numbers were just because the Seahawks were trailing in these games and the defense let up? Think again. Seattle only trailed by more than two scores to start the fourth quarter in one game last year (Week 15 against LAR), proving that the ‘garbage time' term sometimes associated with gaudy statistics can be thrown out in Wilson's case.

The Seahawks will be a vastly different team this upcoming season. Gone are Jimmy Graham, Paul Richardson, Richard Sherman and Kam Chancellor, among several others. They'll be even more dependent on Wilson than ever before. It remains to be seen, but in all likelihood, Wilson's fourth quarter efforts may be counted on again if they want to return to the postseason in 2018.