Rodgers & Nelson: remembering one of the great duos of the PFF era

March 13, 2018 proved to be both a significant and sad day for the Green Bay Packers, as the team opted to part ways with veteran wide receiver and fan-favorite Jordy Nelson.

Nelson, who was drafted by the Packers with the 36th overall pick of the 2008 NFL Draft, played 7,042 snaps over 10 seasons in Green Bay and he will leave the team ranked third in franchise history in regular-season receptions (550), fifth in receiving yards (7,848), second in touchdown receptions (69) and third in 100-yard receiving games (25). His 59 regular season touchdown receptions from quarterback Aaron Rodgers also makes them the most productive QB-WR duo in franchise history, as the couple surpassed Brett Favre and Antonio Freeman (57) during the 2017 season.

Nelson had been teammates with Aaron Rodgers since 2008 when Nelson was about to embark on his first year in the league and Rodgers was preparing to take the reigns as the starting quarterback in Green Bay. During their time together, the two developed the type of chemistry that is rarely found between a quarterback and receiver and they spent the better part of a decade using that chemistry to produce game-winning scores, comeback wins and even a Super Bowl victory.

However, Nelson’s recent release means that the long-time teammates are set to finish their respective careers apart from one another. So now as the sun has set on a generational tandem, here’s a look back on one of the best partnerships that PFF has ever seen. 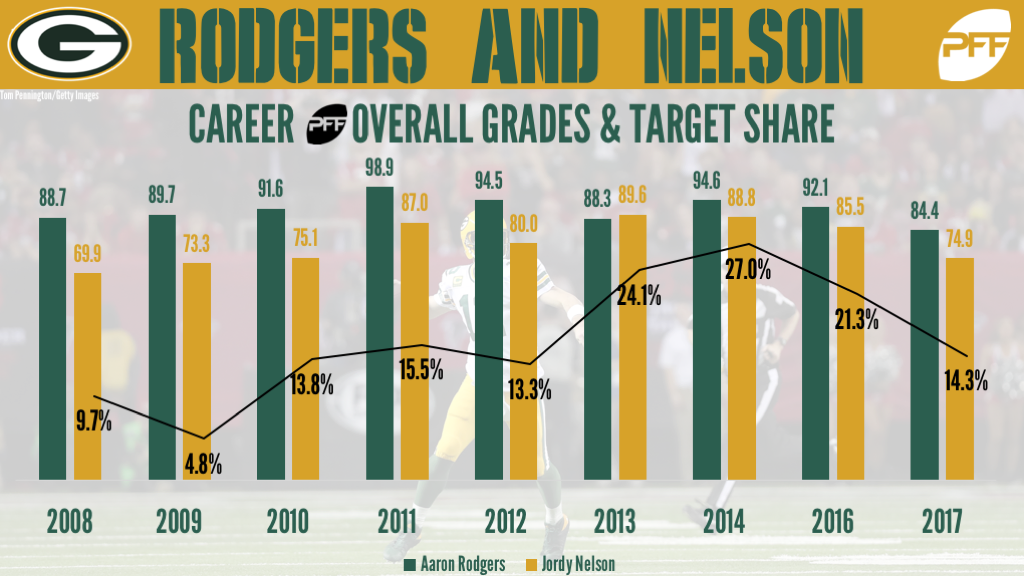 Over the last 12 seasons, PFF has graded every player, on every play, of every game and the resulting grades give us a clear measure of production and performance that is unparalleled in the industry. Even by looking at their respective grades over their time together (Nelson missed the entire 2015 season due to injury), it’s tough to find a more consistent partnership.

From the time Nelson became the established starter in 2011, to the time Rodgers was forced to miss most of the season due to injury in 2017, both players graded above 80.0 in each subsequent season in between and it’s no surprise to see that Nelson’s best grades came when he saw the majority of Rodgers’ targets. It’s also not a surprise to see Nelson’s grade take a significant hit in the 2017 season, when Rodgers played just 417 snaps throughout the campaign.

In their time together, Rodgers’ highest-graded season came in 2011, where he achieved the best season grade ever recorded by a quarterback. During that season, he targeted Jordy Nelson on 15.5 percent of his pass attempts, making him the second-most targeted wide receiver behind Greg Jennings. Throughout the season, Nelson was responsible for 12 of his 47 touchdowns, 1,140 of his 4,907 passing yards and when targeting him, Rodgers produced a near-perfect passer rating of 154.5. Nelson ended the year with an average of 2.75 yards per route run, the second-best mark among wide outs.

Nelson’s highest-graded season with Rodgers came in 2013, when he was Rodgers’ most-targeted pass-catching option, with 24.1 percent of Rodgers’ passes being thrown his way. Throughout the year, Nelson accounted for 33.1 percent of Rodger’s passing yards, 44.4 percent of his touchdowns and generated a passer rating of 138.0 when targeted.

RODGERS AND NELSON: THE PRODUCTION

In the years PFF has data for (2006-2017), no quarterback to wide receiver duo has been more productive or efficient than Rodgers to Nelson. While their respective overall grades tell the tale of their individual performances, it is PFF’s signature statistics that truly demonstrate just how dynamic their connection was. 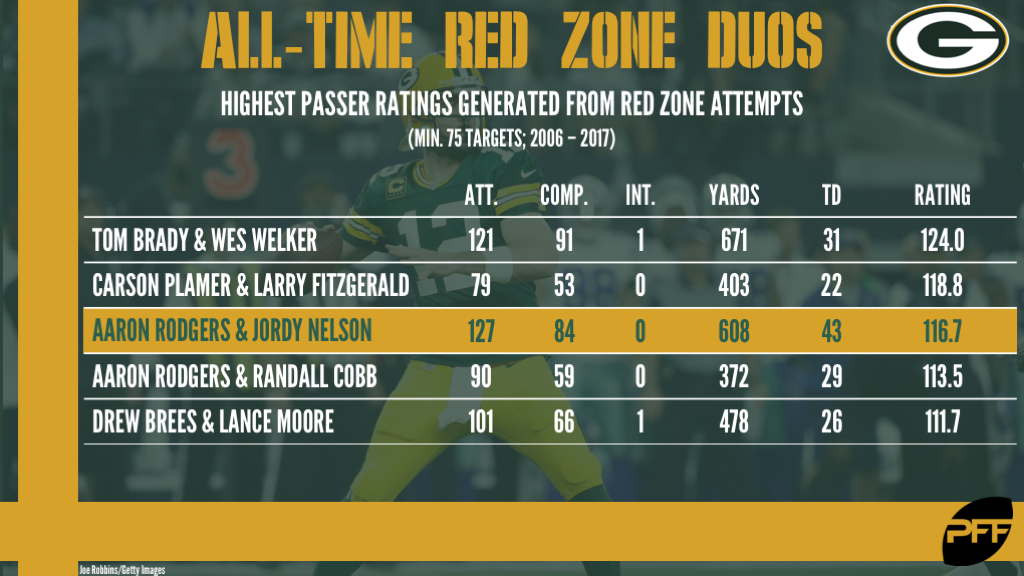 We’ll start with where Nelson’s presence will be arguably missed the most: the red zone. Since 2006, Rodgers has thrown a total of 797 passes from inside his opponent’s 20-yard line and a whopping 127 (15.9 percent) of those targets were thrown Nelson’s way. On those 127 targets, Nelson recorded 84 receptions for 608 receiving yards and 43 receiving touchdowns (17.8 percent of Rodgers’ career red zone scores), all good for a wide receiver rating (passer rating generated when targeted) of 116.7.

In the PFF era, there have been 28 tandems with at least 75 red zone pass attempts to their name, and the 116.7 passer rating generated by Rodgers and Nelson rank third among that group, behind the legendary combinations of Tom Brady to Wes Welker and Carson Palmer to Larry Fitzgerald. In addition to the passer rating generated, the pair also racked up a red zone catch rate of 66.1 percent, which ranked sixth. Their 43 total red zone touchdowns is tied with Drew Brees and Jimmy Graham for the fourth-most among all partnerships over the last 12 seasons. Amazingly, Rodgers did not throw a single interception when he targeted Nelson in the red zone, which makes them the only duo in PFF history to register at least 100 red zone targets without a single interception being thrown. 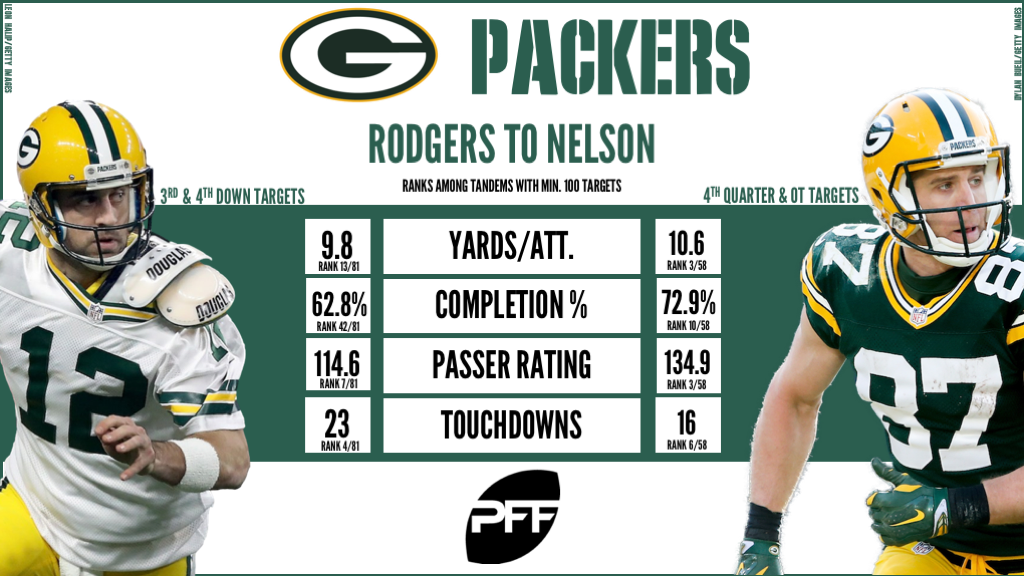 Rodgers to Nelson wasn’t just a red zone gimmick. The connection was also extremely productive in other clutch situations including third and fourth downs. In their time together, Nelson accounted for 15.6 percent of all Rodgers’ third/fourth down pass attempts, which is the most among Green Bay’s pass-catchers in that span. Among the 81 duos that have at least 100 third and fourth down attempts over the last 12 seasons, Rodgers and Nelson have combined to produce the 10th-most receptions (140), the seventh-most receiving yards (2183), the fourth-most touchdowns (23), the seventh-best passer rating (114.6) and all told, they converted 55.2 percent of their targets to either a first down or a touchdown, which is the 12th-best rate among the group. 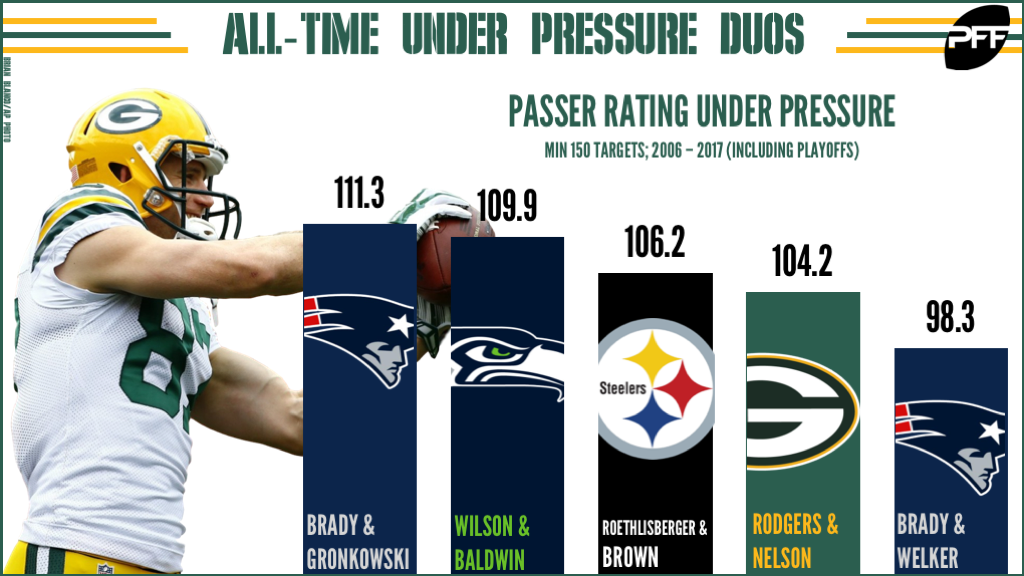 Another tremendous benefit to their connection was their ability to connect even when Rodgers faced defensive pressure, and Nelson’s presence on the football field is a big reason why he has finished in the top 10 in passer rating under pressure in five of his 10 professional seasons as a starter.

In their nine seasons together, Nelson saw 154 targets after Rodgers had faced pressure, making him Rodgers’ most-targeted receiver in such situations. Nelson caught 90 of those passes for 1,391 receiving yards, four interceptions and 12 scores, which generated a passer rating 104.2 – the fourth-best mark among tandems with at least 150 pressured targets within the PFF era. Furthermore, when Rodgers targeted Nelson while under pressure, just 2.6 percent of his attempts were intercepted, which is the third-best rate among the same group and well below the NFL average of 4.4 percent. 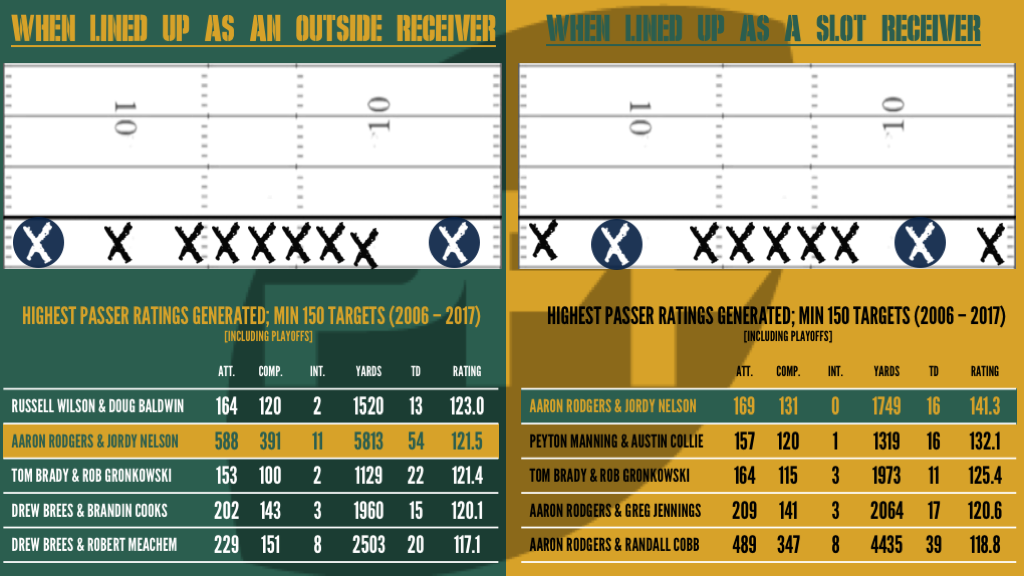 If their production in clutch and pressured situations wasn't enough, the versatility of Nelson was also an impressive aspect of this exceptional tandem. Nelson wouldn’t just line up on the perimeter and collect rehearsed throws from his signal-caller. Throughout his tenure, Nelson lined up all over the field for the Packers and Rodgers was always able to find him, no matter where he lined up.

Nelson saw 169 targets after he lined up as a slot receiver where he racked up 131 receptions for a catch rate of 77.5 percent, the second-best mark among duos with at least 150 targets within the PFF era. More impressively however, is that they generated a passer rating of 141.3 on those targets, which is nearly 10.0 points more than the next closest pair and they’re currently the only tandem in PFF history to log at least 150 slot targets and not have an interception next to their ledger.

When Nelson lined up outside, it was the same story. Rodgers completed 66.5 percent of his passes when targeting Nelson from an outside alignment, which towers over the NFL average of 58.9 percent and they combined to produce a passer rating of 121.5, the second-best mark among duos with at least 150 attempts. Impressively, in the 12 years that PFF has data for, Ben Roethlisbergerto Antonio Brown is the only quarterback-to-outside-wide receiver duo that have combined for more touchdowns than Rodgers’ and Nelson’s 54. 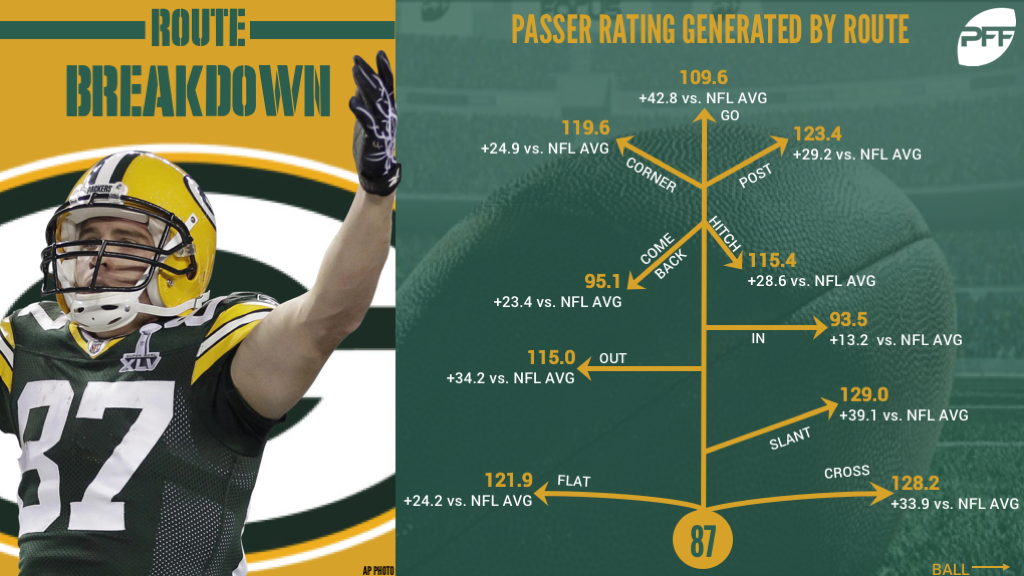 Their success is because of any dink-and-dunk type passes, rather, more or less the opposite. Since Nelson entered the league, his average depth of target (aDOT) from Rodgers was 12.5 yards downfield. To put that into perspective, the league average currently sits at 8.9 yards downfield and the figure ties “Nelson to Rodgers” with “Peyton Manning to Reggie Wayne” and “Matt Ryan to Julio Jones” for the 10th-deepest aDOT among duos with at least 300 targets over the last 12 seasons.

If we look specifically at deep passes, which we define as passes that least 20 or more yards in the air from the line of scrimmage, we can also see that the Rodgers to Nelson connection was also lethal when it came to stretching the field. Since 2006, 43 quarterback-to-receiver combos have logged at least 75 deep passes between them and the Packers' duo racked up the ninth-best catch rate (42.7 percent) and generated the eighth-best deep passer rating (123.8) among those. Their 2,559 deep yards is only surpassed by Andy Daltonto A.J. Green and Ryan to Jones while their 23 deep touchdowns ties them with Matthew Stafford to Calvin Johnson for the third-most among duos.

We can also see this by looking at their route tree, throughout their time together, the pair performed well above average on all the basic routes on the route tree, but they were particularly successful at connecting with shorter routes (flats, crossers and slant routes) which is highlighted by the 129.0 passer rating produced on slant routes – or 39.1 points above the NFL average. However, we can also see that the pair was also exceptional at connecting on the deeper routes of the route tree (corner, post and ‘go' routes) which is highlighted by their 109.2 passer rating generated on ‘go' routes – a colossal 42.8 points above the NFL average.

RODGERS AND NELSON: TOGETHER AND APART 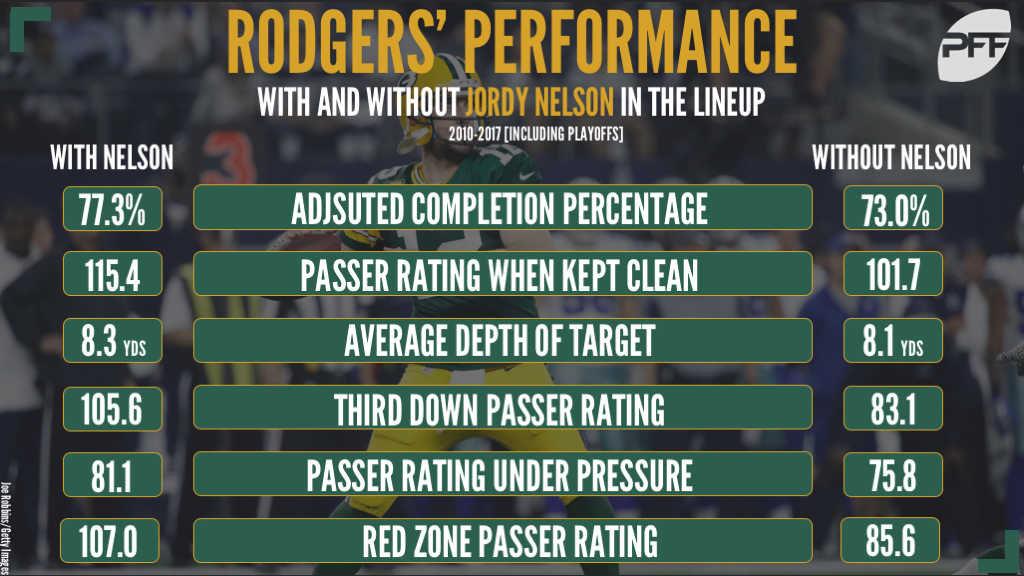 The mark of a truly great partnership is when both athletes make each other better and this is no different with Rodgers and Nelson. Since 2010 (which when Nelson first played at least 50.0 percent of his team’s snaps), Rodgers has been without his trusted wide receiver for 23 of the 125 games in that span.

When we compare his performances with and without Nelson in the lineup, we can see that Rodgers has been much more productive and efficient with Nelson by his side. This is especially highlighted by his passer rating when he’s been kept clean from pressure, a metric that PFF’s data scientists Eric Eager and George Chahrouri have found to be a stable metric for quarterbacks from year-to-year. With Nelson in the lineup, Rodgers’ passer rating when kept clean has been 115.4, which is well above the league average of 95.4. However, without Nelson on the field, that rating falls almost 15.0 points to 101.7, much closer to average.

Whether it’s by watching the film or looking at the numbers produced, it’s easy to recognize that the Rodgers-to-Nelson connection at its best, was a near unstoppable force. And while the Rodgers-to-Nelson era may be coming to an end in Green Bay, it will live long in the history books and the memories of not only Packers fans, but all football fans alike.