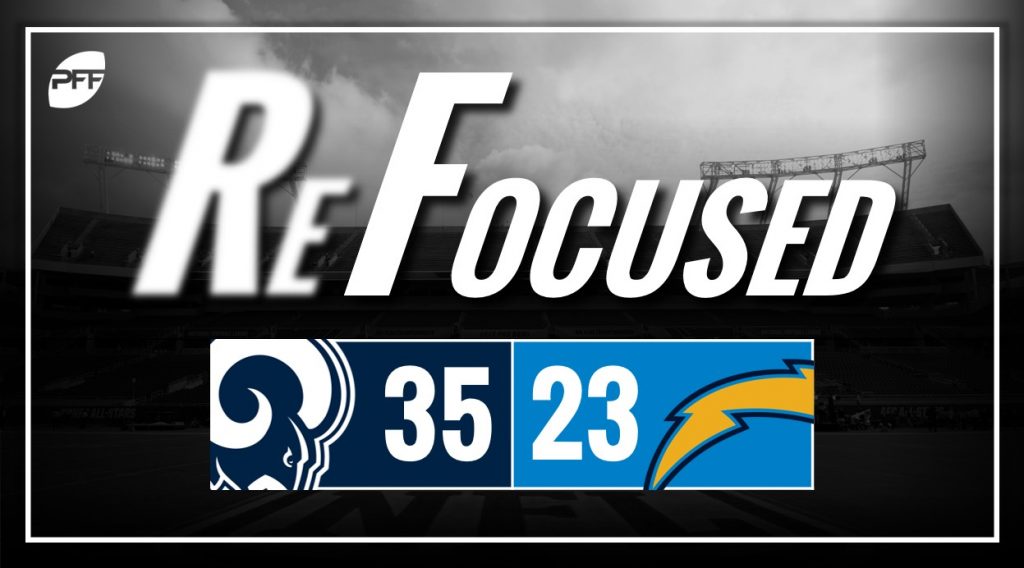 Second-year wide receiver Mike Williams looked every bit worthy of the first round pick the Chargers used on him. Williams looked physically imposing on both of his touchdowns, and he hauled in four of his six targets for 81 receiving yards.

As soon as the Chargers got into obvious passing situations, they were toast with the holes on their offensive line. Left guard Dan Feeney and right tackle Sam Tevi both gave up five-plus pressures on the day, and quarterback Philip Rivers was given little to no time to orchestrate the offense effectively.

The Chargers desperately miss Joey Bosa‘s pass-rushing ability up front. No player in the Chargers front seven recorded multiple pressures, and they struggled to get in Jared Goff‘s face.

Derwin James continues to be the bright spot in the Chargers secondary. He showed cornerback like skills by breaking on an out route in the end zone and by picking off the pass in the first half.

Quarterback Jared Goff found success throwing the ball down the field Sunday. On 11 attempts, Goff completed 9 for 187 yards, a touchdown, and an interception.

The Rams offensive line continued to dominate. They opened up gaping holes all game long in the run game and only allowed pressure on four of Jared Goff's 38 dropbacks.

Aaron Donald and Ndamukong Suh continue to be a handful. They may have combined for only one sack, but both were in Philip Rivers' lap all day. Both interior defensive linemen registered at least five quarterback pressures.

Sam Shields looked solid filling in for the injured Marcus Peters. His pass breakup in the end zone in the fourth quarter was an incredibly intelligent play, as he peeled off his coverage to help safety Lamarcus Joyner.

Los Angeles Rams: The Rams offensive line put on another stellar performance and gave Jared Goff and the high-powered Rams offense the required time to effectively move the ball.
Los Angeles Chargers: The Chargers' offensive line struggled every bit as much as the Rams' line succeeded. With little to no time in the pocket, Rivers struggled to get the ball into the hands of his playmakers.