The Los Angeles Rams defeated the Arizona Cardinals, 34-0, continuing the second full week of action in the NFL. 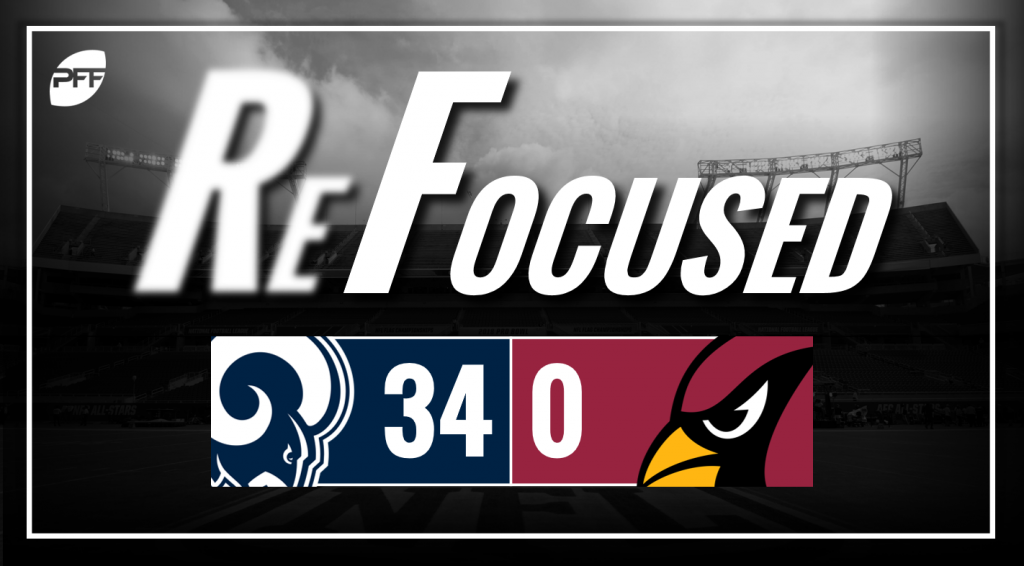 Todd Gurley continued to be the work-horse for the Rams offense, as he saw the bulk of the day's carries and was often targeted in the passing game. While Gurley didn't produce jaw-dropping numbers on the ground today, he did punch in 3 touchdown runs before he left the game with a cramp.

So far, the high-powered Rams offense has barely utilized their tight ends in the passing game. Brandin Cooks, Cooper Kupp and Robert Woods continue to dominate Goff's attention and the wide receiver trio are getting the bulk of the pass targets. Brandin Cooks was Goff's favorite target today and he put up a big performance that ultimately helped lead his team to victory.

The Rams defensive front gave the Cardinals offensive line fits throughout the game. It won't show up on the stat sheet, as Los Angeles only recorded one sack, but they were able to consistently pressure quarterback Sam Bradford, which dramatically affected his accuracy. It was clear their game plan consisted of games and stunts up front to confuse the Cardinals rookie center Mason Cole.

Credit must be given to the Rams secondary, as the Cardinals receivers failed to create any separation in their routes and the Rams were able to break up multiple throws. Today, Los Angeles held the Cardinals to 3.3 yards per pass attempt, which is far below league average.

The Cardinals offense couldn't muster anything today. Their passing game was irrelevant, as they threw for under 100 yards on 27 attempts and running back David Johnson only carried the ball 13 times as they fell behind early. Undoubtedly, there will be fans calling for quarterback Josh Rosen, but the Cardinals offensive struggles go way beyond just the quarterback position.

For the second consecutive game, David Johnson failed to make a meaningful impact, but he wasn't particularly given the opportunity to make a difference, as he only saw 27 total touches – a relatively small number for such a dynamic playmaker.

The Cardinals defense had a difficult time slowing down the Rams high-powered offense. There were plenty of mediocre performances, but edge defender Benson Mayowa was a bright spot today, as he showed real promise as a pass-rusher and notched two sacks.

The perennial All-Pro Patrick Peterson was once again a standout member of the Cardinals defense. His best play of the day came when he undercut a route in the end zone and grabbed a much-needed red zone interception.

Los Angeles: The Rams' offense was just too much for the Cardinals defense to stop. Even when Todd Gurley left the game with a cramp, his replacement, Malcolm Brown, picked up right where Gurley left off.

Arizona:  The lack of offense for Arizona has to be a concern going forward. They've put up 6 points the first two games and seemed unable to muster anything this evening.