The Tennessee Titans defeated the Houston Texans, 20-17, continuing the second full week of action in the NFL. 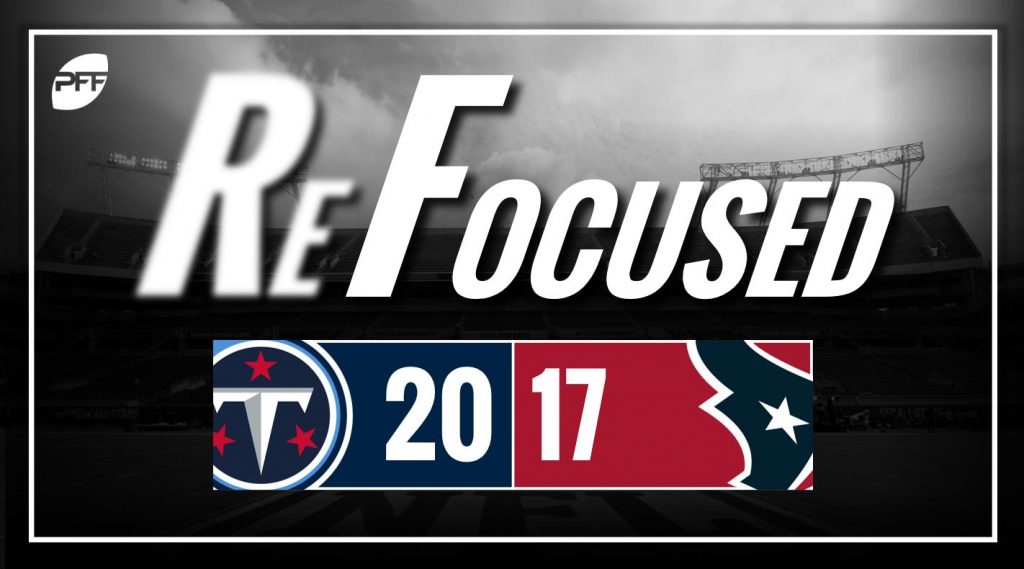 Blaine Gabbert rarely challenged the Houston secondary on intermediate or deep throws. This prevented him from making critical errors, but it also allowed the Texans to stack the box against the run.

Derrick Henry had a busy workload today, even while playing the role of the wildcat quarterback at points in the first half. While he was able to make a number of Texans linebackers and defensive backs miss the initial tackle, he was never able to break any large runs off.

Malcolm Butler struggled mightily in coverage, especially against Texans wide receiver Will Fuller. Butler couldn't keep up with the speedy wideout in man-to-man coverage throughout the game. It was evident the Texans wanted to pick on Butler, as he was thrown at over 10 times.

Rookie edge defender Harold Landry really stood out in his debut, earning a handful of pressures. As a whole, the Titans were relentless with their pass-rush, as they kept Deshaun Watson uncomfortable in the pocket throughout the game.

JJ Watt was virtually unblockable on run downs, as he was able to consistently beat one-on-one blocks off the left edge. The Titans were able to devote more attention to him in pass protection, but Watt's constant presence in the backfield prevented the Titans from getting any rhythm going on offense.

While never resulting in huge plays, the inability of the Houston cornerbacks to tackle ultimately cost them the game. The most critical example of this came on Tennessee's game-winning field goal drive on a screen pass to Corey Davis on a key second and 12, as both Justin Reid and Johnathan Joseph whiffed in the open field allowing him to convert for a first down (despite fumbling out of bounds) and put the Titans in field goal range.

Watson and Fuller showed great rapport in their first game together since the midway point of last season. Watson often turned to Fuller in clutch situations and the speedy wideout constantly delivered.

The Texans' offensive line struggled in pass protection. The unit was often unable to give Watson much time to throw, as it was constantly beaten in individual matchups.

It wasn't pretty, but the Titans got a key break late when a Davis fumbled fell harmlessly out of bounds, and the offense avoided making other critical errors to force Houston to work with long fields.

The Titans' pass-rush was the deciding factor in this matchup. The front-seven constantly forced pressure and kept Watson on his toes throughout the game.