Nashville, TN, USA; Tennessee Titans running back Derrick Henry (22) reacts after running for a touchdown during the first half against the Washington Redskins at Nissan Stadium. Mandatory Credit: Christopher Hanewinckel-USA TODAY Sports 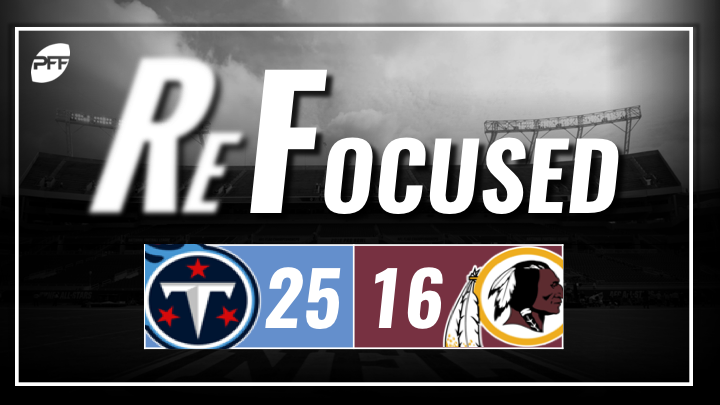 The Titans kept up their game plan from the previous weeks, and that was to get the ball to Derrick Henry and let him pound the football. Henry showed up in a big way on the Titans last touchdown drive to take the lead. Henry got going downfield, and it was tough for Washington's defenders to get him down without giving up yards after contact.

One of the stories of the second half was the play of backup quarterback Blaine Gabbert. While Gabbert didn’t set the world on fire, he made some solid throws when the team needed him to, and he did not turn the ball over. Gabbert played well enough in a pinch to keep the Titans’ hopes alive.

Kevin Byard came up with the game-sealing interception late, but was effective in coverage throughout, forcing incompletions on two other targets and allowing limited yardage into his coverage.

Tennessee struggled to generate pressure for most of the night, and they gave Josh Johnson ample time in the pocket. Most of the pressure that the Titans did manage to generate came from getting free rushers on blitzes.

Washington leaned heavily on Adrian Peterson, who carried the Redskins offensively, as he rushed for 119 yards on 26 carries. Peterson frequently had to overcome some shaky run-blocking from an offensive line that had trouble with the Titans' defensive front.

Josh Johnson was efficient with his limited opportunities for most of this game, and he made enough plays to help Washington's offense sustain long drives. However,  he sailed a pass into the waiting arms of Titans safety Kevin Byard on the Redskins' penultimate drive, and that mistake ultimately cost his team the game.

The Redskins had their hands full with Derrick Henry on Saturday evening. When the Titans did throw the ball, the struggled to get pressure on the Titans' quarterbacks. The Redskins were only able to have success against Josh Kline, but that was not enough disruption to create turnover-worthy plays.

On the back end, the Redskins really struggled to keep receivers in front of them. On many occasions, Titans receivers were open behind the defense, but the majority of throws were out of reach.

Tennessee:  The Titans stuck to their recent formula of ground and pound. Their offensive line got an effective push for Derrick Henry, and they protected their quarterback well.

Washington: Washington executed the game plan of feeding Adrian Peterson early and often while relying on the passing game only when necessary. But the margin of error with that approach is a small one, and Josh Johnson's one big mistake was enough to make the difference.