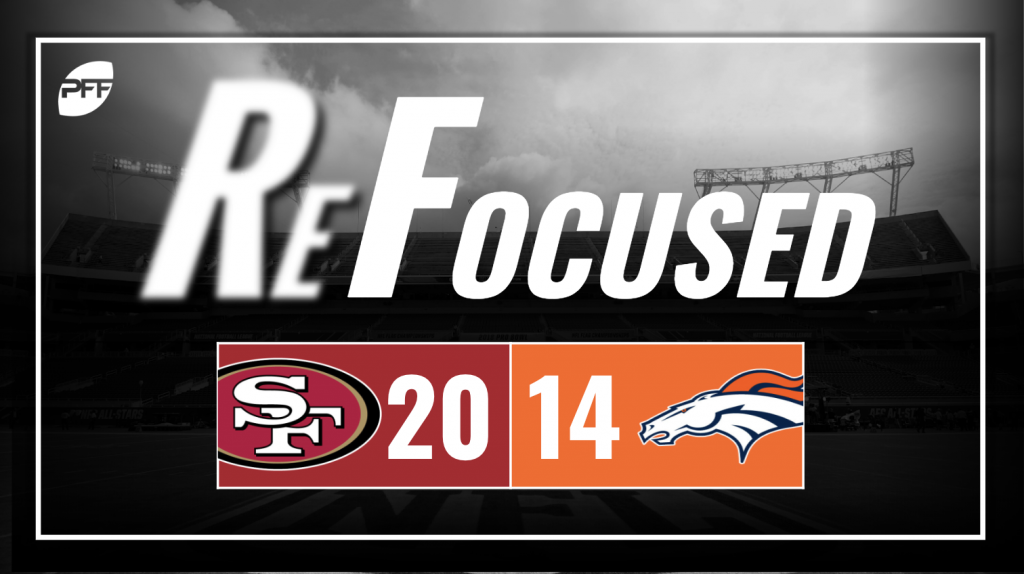 His final grade may lack the impressiveness expected considering the stat line he had (he had a penalty and missed multiple run blocks), but the day belonged to George Kittle. The second-year tight end took advantage of busted coverage and bad tackling on his way to over 200 receiving yards in the first half, including an 85-yard touchdown catch and run.

The 49ers went ultra-conservative in the second half, opting to focus almost exclusively on outside zone run plays. This allowed Denver back into the game because the Broncos made the defensive corrections they needed to at the half and completely controlled the line of scrimmage in the final two frames.

Both D.J. Jones and D.J. Reed Jr. had fine days in run defense against Denver. Jones set the tone early in the interior of San Francisco's defensive line, shedding Connor McGovern on Denver's first rush attempt of the game to make a tackle for just a one-yard gain. Reed Jr. also racked up run stops all throughout the game.

Solomon Thomas had a productive day rushing the quarterback in Week 14. Thomas wasn't able to take Case Keenum down for any sacks in this one, but he did lay a few good hits on him and tacked on a handful of pressures, as well.

While notching a sack and multiple pressures, today was not a great day for Von Miller. He was caught with three neutral zone infractions in the first half, and his sack was due to his defensive tackle (Derek Wolfe) holding 49ers rookie left tackle Mike McGlinchey to free Miller on the edge.

This was a rough one for the Denver secondary, in particular, safeties Su'a Cravens and Justin Simmons. They combined to miss a number of tackles and too often had mishaps in coverage due to confusion.

It wasn't a disastrous game by Keenum, but he didn't really do anything to elevate his offense against San Francisco. Keenum spent most of the day throwing short passes outside the numbers and had virtually no issue challenging the middle of the field. The only two balls he threw that traveled at least 10 yards in the air in the middle of the field was throw down the seam to Daesean Hamilton mid-way through the fourth quarter – a throw that resulted in a net 33-yard gain after a penalty added 15 yards onto it – to get them into scoring range and then the very last play of the game.

The bold strategy of not tackling or covering Kittle in the first half did not play out well for the Broncos.

Denver's offense sputtered through this one in all phases, unable to muster up anything to challenge San Francisco's defense.