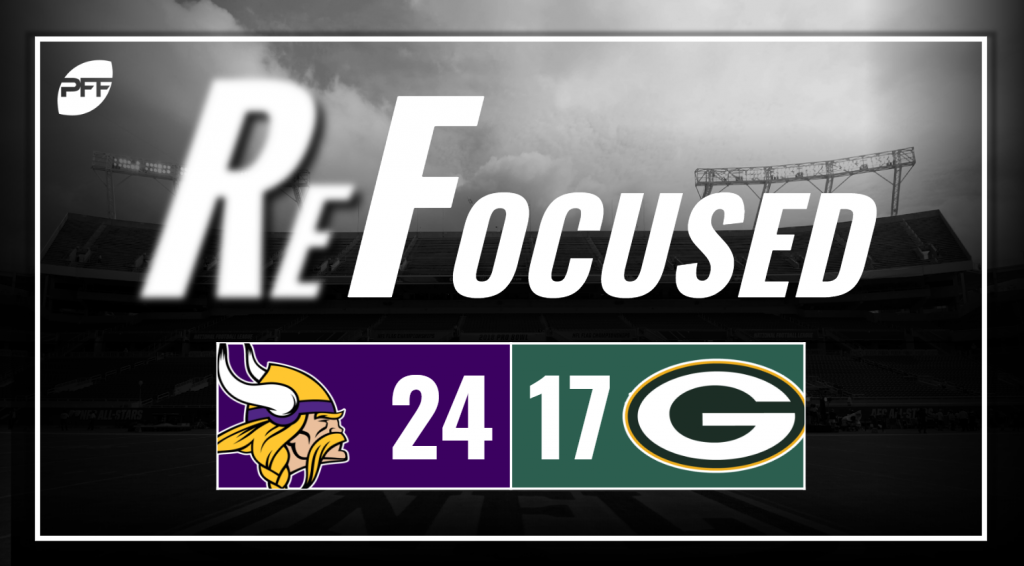 Kirk Cousins threw for 300 yards for the third time against the Packers. This week, Cousins was under consistent pressure but was able to keep the ball moving and didn't let the pressure affect the Vikings' offense. Cousins' best throw of the game was in the second quarter, as he beat tight coverage to get the ball in a tight window to Adam Thielen.

The Vikings' stout defensive line got to Aaron Rodgers four times and forced him to either leave the pocket or throw early on a number of occassions. Sheldon Richardson led the way with multiple pressures, including two sacks.

The secondary did an admirable job to hold Rodgers to under 200 passing yards and, until a late fourth-quarter completion to Davante Adams, held him to 33 yards on four receptions. Xavier Rhodes exited the game late with an injury. The Vikings will be hoping it's nothing serious, as he's a key component to their defense.

Rodgers tried to spur a comeback but came up short. Rodgers and Adams couldn't connect on a late touchdown to bring it within a field goal, and that could go as a moot point, though, as Green Bay couldn't recover the onside attempt. Rodgers faced pressure throughout the game from a strong Vikings defensive line and ended up throwing for less than 200 yards on 28 attempts.

Rookie receiver Equanimeous St. Brown had a strong first half and hauled in three passes for 53 yards but was shut down in the second half. Running back Aaron Jones surpassed 10 carries for the fifth straight game, as he carried 17 times for 72 yards. While the Packers' offensive line had their struggles and Rodgers was sacked four times on the night.

Rookie cornerback Jaire Alexander had another game where it looked like he could be on of the best corners in the league in the next few seasons. Even when he was beaten downfield, he was in perfect position. Just a better throw beat him. Alexander also blew up a screen early in the game that led to a loss of 10 yards.

Clay Matthews showed his best form, as he was able to consistently able to get quick pressure and force the ball out quickly for Cousins. Unfortunately for the Packers, the Vikings' offense used their weapons on the outside to minimize the danger of the quick pressure

Cousins was effective in spite of the offensive line. At some point, the poor performances up front will catch up to the Vikings, but that may not happen this season. Cousins produced downfield throws and never put the ball in harm's way.

Aaron Rodgers and the Packers fell short on their comeback attempt and their playoffs hopes may have taken a hit in the process. Credit the Vikings defense for sacking Rodgers four times and holding him to under 200 passing yards.