The Los Angeles Rams defeated the New Orleans Saints, 26-23, in the NFC Championship. 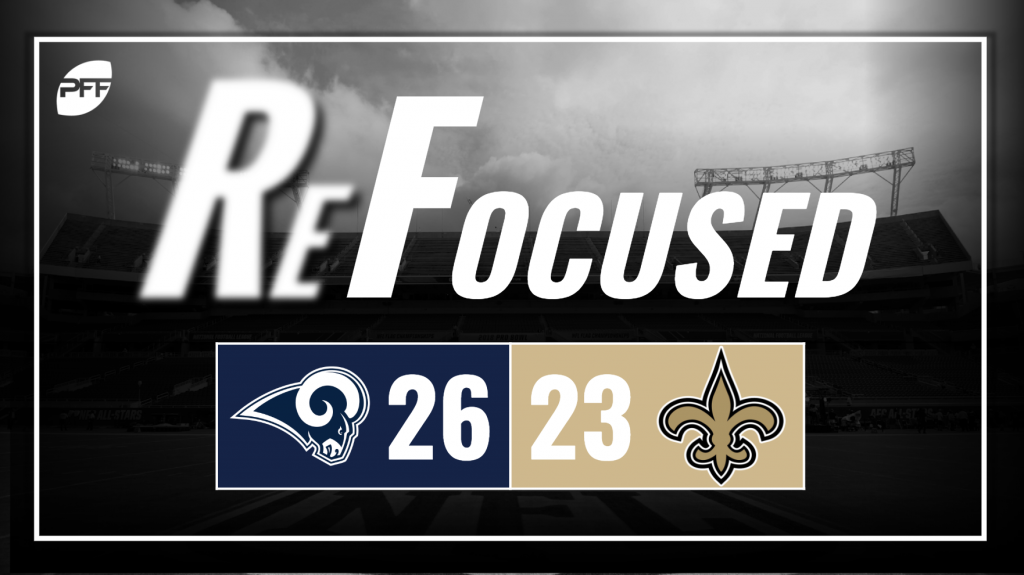 In the first half, the L.A. offense looked nothing like it has this season with a sluggish start that struggled to move the ball. A quick two-minute drive led by Jared Goff at the end of the first half got the ball rolling for them, and Goff continued to come up with big throws in the fourth quarter to help lead the overtime comeback.

Todd Gurley had a brutal performance in the first half. He was given just three carries and gained four yards and had two drops on third down. One led to an interception deep in their own territory. The other would have been an easy first down pickup but instead L.A. had to settle for a field goal. In the end, C.J. Anderson was given 12 more carries and four more snaps overall.

For the second week in a row, Ndamukong Suh was playing at his best. Suh recorded two sacks and took control in the run game, winning with his power and speed against the Saints' interior offensive line.

The return of Aqib Talib made a big difference to the Rams' defense from their Week 9 meeting with New Orleans. Talib helped the Rams' secondary prevent the Saints wideouts from dominating the affair. Ted Ginn Jr. finished with a team-high 58 yards.

Drew Brees struggled to move the ball downfield for the Saints. The majority of the offense ran through short passes to Alvin Kamara, who caught 11 of Brees' 26 completions.

The Saints' defense played very well early in the game and, coupled with the stadium noise, had the Rams off their game in the first half. But they couldn't make enough plays in coverage late in the game when they needed to. If Robert Woods hadn't gone to the ground on a slant on the Rams' game-tying drive, it was entirely possible that they would have taken a touchdown lead after P.J. Williams misplayed the route giving him a wide-open shot in the middle of the field.

The Saints' offensive line struggled with the Rams' defensive front, as they were unable to open any holes to create running room. The Saints only averaged 2.3 yards per carry in the contest.

New Orleans got a decent amount of pressure on Goff, but they couldn't convert many into sacks, nor get the pressure to cause incompletions in the final minutes of the game when it mattered most. Cameron Jordan had the Saints' lone sack in the game but still beat Rob Havenstein a few other times.

The Rams overcame a slow start on offense to score 16 points in the second half and eek out the win in overtime.

The Saints will forever see this game as one that was a blown call away from a win and another Super Bowl appearance. The missed pass interference call on third down in the last two minutes would have given the Saints the chance to run down the clock to win the game in regulation.