The Tennessee Titans started well Saturday, putting the first seven points on the board against the New England Patriots. That was just about it for the underdog Titans, though, as the Patriots put up 35 unanswered points from that point forward en route to a 35-14 victory to advance to the AFC Conference Championship game.

RB James White scored once on the ground and once through the air in the game, and Brandon Bolden, Chris Hogan, and Rob Gronkowski each chipped in scores as well. For Tennessee, rookie WR Corey Davis had the first and second scores of his pro career to account for the team's touchdown production

The rookie wide receiver started the game off with a spectacular one-handed catch for a touchdown on the Titans' first scoring possession. He ended the game with five catches on eight targets totaling 63 yards and two touchdowns. Most of his work came against Malcolm Butler, catching three of four passes for 43 yards while in his coverage.

While Mariota didn't turn the ball over, he was pressured often, which led to some errant throws. Of his 48 dropbacks, he was pressured on 19 while being sacked eight times and his numbers dropped off significantly while facing pressure, going 5-of-10 for 48 yards. Playing from behind throughout most of the night, he was forced to push the ball downfield and wound up going 10/19 for 170 yards on throws traveling more than 10 yards in the air.

The Patriots had a field day with 178 yards after the catch Saturday night, and Woodyard was one of the main culprits. He was targeted 11 times, ceding nine catches for 84 yards — 76 of which came after the catch.

While many in the Titans secondary got torched Saturday, Jackson was not one of them. He was targeted six times, allowing only two catches for 20 yards. He added a pass breakup in a valiant effort tracking Brandin Cooks for most of the day.

After a bit of a slow start, Brady ran a well-oiled machine over the last three quarters of the game. He had only one completion targeted 20-plus yards downfield, but was money in the intermediate range. On throws targeted 10-19 yards down the field, Brady was 8-11 for 105 yards and two touchdowns. The Pats QB was only pressured 13 times on the day, but had a passer rating of 102.1 on those dropbacks.

The Titans didn't have an answer for Gronk when they played man coverage. Kevin Byard was often the one tasked with guarding Gronkowski and he allowed all four targets to be caught for 41 yards and a touchdown. He also contributed some solid work as a run-blocker for the game's highest overall grade.

New England's defense was able to generate a solid pass-rush against the Titans, leading to eight sacks. Flowers led the way with a pass-rush grade of 83.3 and recorded four total pressures. Geneo Grissom had a quality performance in garbage time, racking up two sacks and three quarterback hurries. 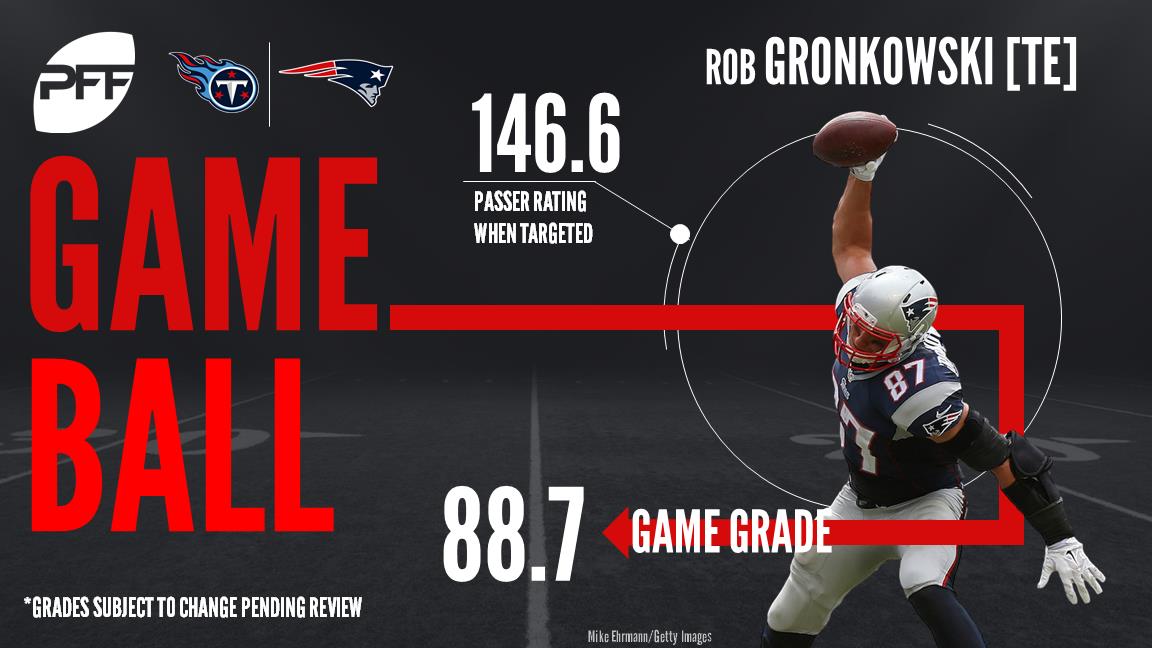